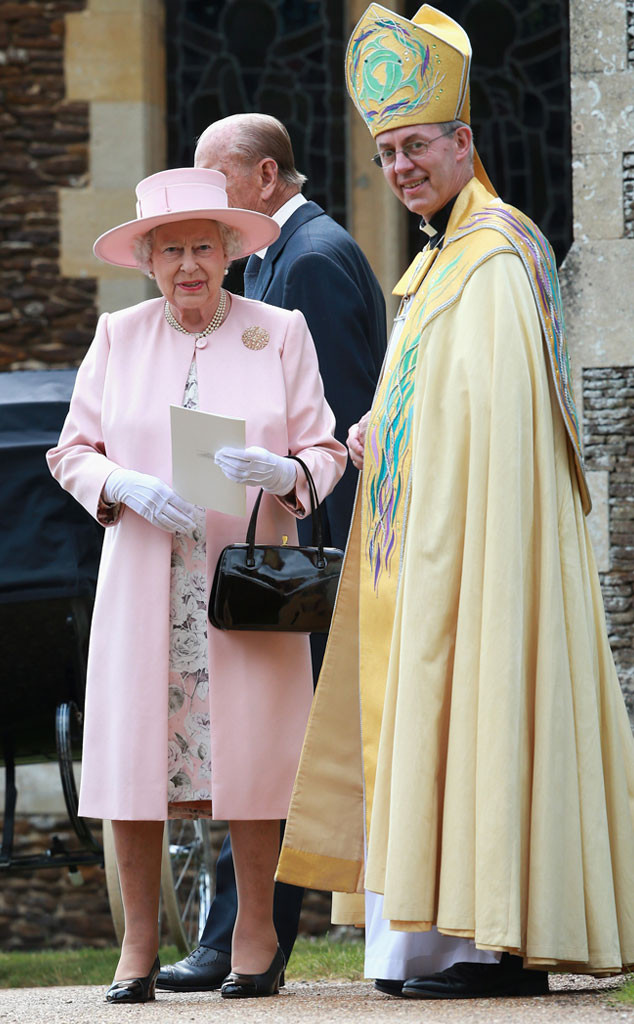 My siblings in Christ:

As with most world historical events, the death of Her Majesty Queen Elizabeth II evoked deep and disparate feelings. Most Episcopalians and Anglicans felt a special kinship with her, and not only because she was defender and supreme governor of our sibling church, the Church of England. She spoke easily and authentically about her faith, acknowledging God’s blessing amid joy and God’s comfort, in her people’s sorrow as well as her own. Such witness set her apart from most heads of state and government.

Joining less enthusiastically in the tributes over the last week were those with strong feelings about the brutal consequences of British colonialism or the anachronism of hereditary privilege. If we felt dismayed or strangely warmed by royal family drama, movies and streaming services served up dramas galore.

The projection wasn’t limited to cameras. My maternal grandparents came from England, bequeathing Anglicanism and Anglophilia to my mother, Jean, and me. The queen had even more privileged status in our small household after Jean, a reporter for the Detroit Free Press, was assigned to cover Her Majesty’s visit to Canada in 1959. Without prompting, she would show you her credentials and tell her royal stories. The queen and my mom were each 33 that year. Jean never got over her feeling of personal connection with her contemporary, formed by means of her glimpses of Elizabeth from the press pool.

Above all, the queen embodied constancy and continuity. She was the North Star incarnate – steady, dependable, always there. As British society changed during her seven decades on the throne, while no one would have called her a visionary or social revolutionary, she rarely stood in the way of the arc of history as it bent slowly toward justice.

As we have recently seen in the United States, pluralizing democracies suffer desperately without such leadership. A former archbishop of Canterbury, Rowan Williams, asks what we will do without her example. He called the queen:

[S]omeone whose living-out of her role kept alive the question of how increasingly secular societies find any kind of durable unity in the absence of the great common symbols of grace, in the absence of that “canopy” that offers us an identity larger than our own tribe and interest group and holds us in a kinship we haven’t had to invent for ourselves.

Rowan leaves it there, posing, it seems to me, an implicit challenge to those who still believe as the queen did: That we are all creatures of a benevolent God whose lives are best lived out in a spirit of thanksgiving and self-sacrificial devotion to others’ needs. Because we are still here, able and willing to follow her example. It may well be that someone is hard at work on a political platform or philosophical doctrine embodying thanksgiving and self-sacrifice as signifiers of a well-lived human life. If they succeed, which I predict is doubtful, perhaps then we can lay down our cross. In the meantime, essential work remains for the remnant who trust in the sovereignty of our risen Savior and devote themselves to glorifying God and caring for God’s people.

Perhaps this is especially true for the queen’s fellow Episcopalians and Anglicans, we followers of the middle way between polar extremes, we who are comfortable with nuance, we pilgrims wandering in the grey areas. Discerning Anglican leadership rescued and redeemed this summer’s Lambeth Conference, for example. In its early days, the current archbishop of Canterbury, Justin Welby, found himself managing a crisis brought on by a last-minute effort to reaffirm a trauma-inducing 1998 resolution stating that homosexual activity was inconsistent with holy scripture. Instead, he lifted up the careful work of provinces and dioceses that have made a good theological case for marriage equity, proclaimed that there was room under the tent for both views, and said that the era of punishing affirming churches in the Anglican Communion was over.

Welby didn’t promote unity for unity’s sake but for the sake of the Anglican Communion’s ministry in a world in agony. In her letter to the conference, the queen said that Christian unity in a changing world was more important than ever, stressing climate change as a crisis needing our full attention. Adding other crises and projects to the list may trick us into feeling powerless. It needn’t. Yes, injustice, inequity, and iniquity are rampant. Yes, we’re weary from the pandemic and anxious about the future. It’s a problem everywhere, but experts have the answer. Rest, breathe deep, take care of ourselves, accentuate the positive – and then take action, especially locally, because good work on behalf of others, following the queen’s example, renews hope and optimism.

This autumn in our diocese, we have many opportunities for action, beginning as we give thanks locally for Her Majesty’s life. All are invited to special services of Evensong on Sunday, Oct. 2 at 5 p.m. at All Saints Beverly Hills and Sunday, Oct. 9 at 4:15 p.m. at St. James’ in the City. Next Monday, Sept. 19 at 7 p.m., St. Thomas the Apostle in Hollywood will offer a requiem mass for the queen where I will preach. 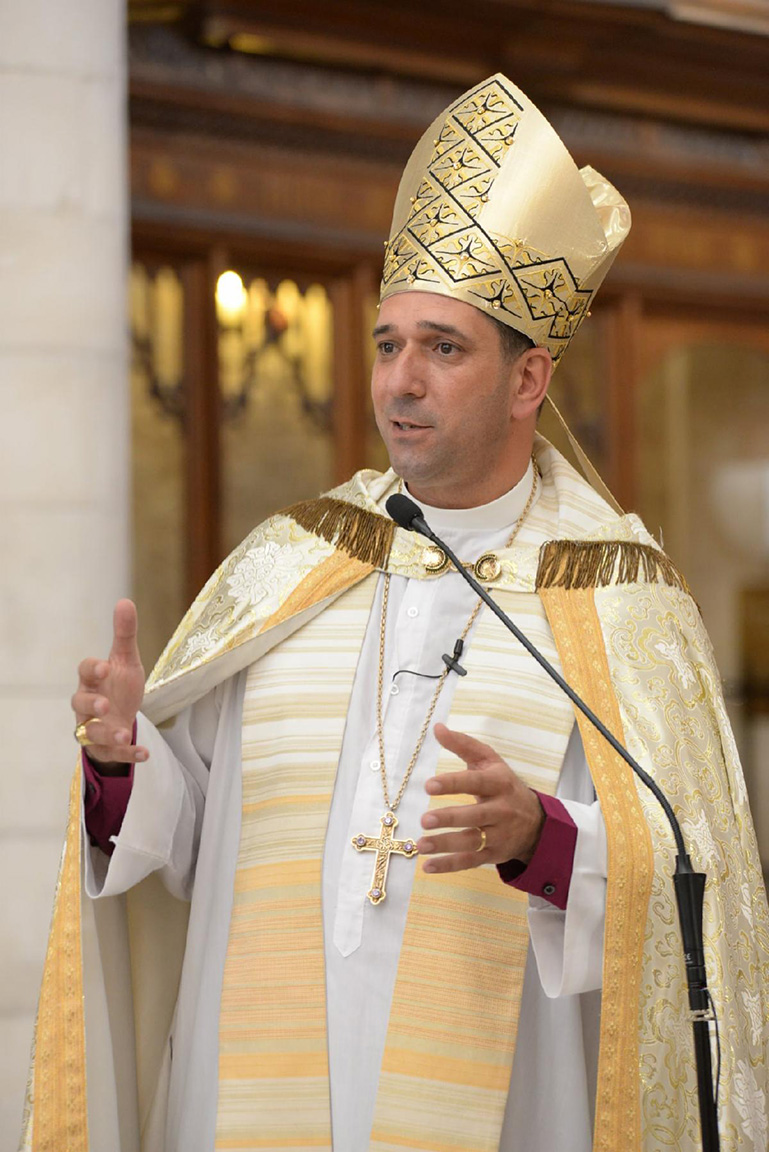 In line with the queen’s life of faith and service, as we emerge from introspective pandemic times, our convention theme this year is “Back to the Holy City: The Hope of Christ in Our Time.” Our keynote speaker on Saturday, Nov. 12 will be Archbishop Hosam Naoum of the Diocese of Jerusalem. To help us prepare for his reflections on contemporary issues in Israel and Palestine, we will offer a virtual town hall on Saturday, Oct. 8 at 10 a.m. to which all are invited free of charge. Organized by Churches for Middle East Peace, it will include prominent experts from the Jewish, Christian, and Muslim traditions. Sign up here.

We don’t have to be experts on the Middle East to listen discerningly to the archbishop. But studying its history and politics is a good way to develop a habit of rejecting the secular world’s preference for reductive, binary, either-or solutions. We cannot have peace in the land of the Holy One unless all its people have freedom, security, and the right of national self-determination. Such work is always difficult, especially when people are at risk or living in conditions of injustice. Prayer, conversation, and reading during and after a week I spent in Jerusalem in August reminded me of the enormity of the challenge. Working effectively for peace with justice in the Holy Land requires us to balance seemingly irreconcilable narratives, as Archbishop Welby did at Lambeth.

For both-and solutions, call Anglicans – in the Middle East, and at home. For three weeks beginning on Wednesday, Oct. 12 at 6 p.m., the Rev. Canon Susan Russell, diocesan canon for engagement across difference, will lead a discussion series based on Pamela Cooper-White’s book The Psychology of Christian Nationalism: Why People Are Drawn In and How to Talk Across the Divide. Write to Susan to sign up. The Bishop’s Commissions on Climate Change (chaired by the Rev. Canon Melissa McCarthy) and Gospel Justice and Community Safety (chaired by Sister Patricia Sarah Terry) offer many opportunities for local engagement and action. Write to them today if you’re interested in learning more or joining.

As we engage across difference, our faith in the unity of all under Christ invites us to engage across borders. Today in Nicaragua and on Sept. 16 in Mexico and most Central American nations, our neighbors will celebrate their independence from Spanish colonial rule. Despite bonds of history, foreign policy, economics, and sheer humanity, common sense immigration reform remains beyond the capacity of the U.S.’s elected leaders. But sharing narratives and making friends is Episcopalians’ sweet spot. On Nov. 4 – 5, the Southern Border Committee of the Program Group on Global Partnership invites you on a pilgrimage to the Posada del Migrant Shelter in Mexicali to get to know some of those who venture north, fleeing mortal danger. Learn more here. 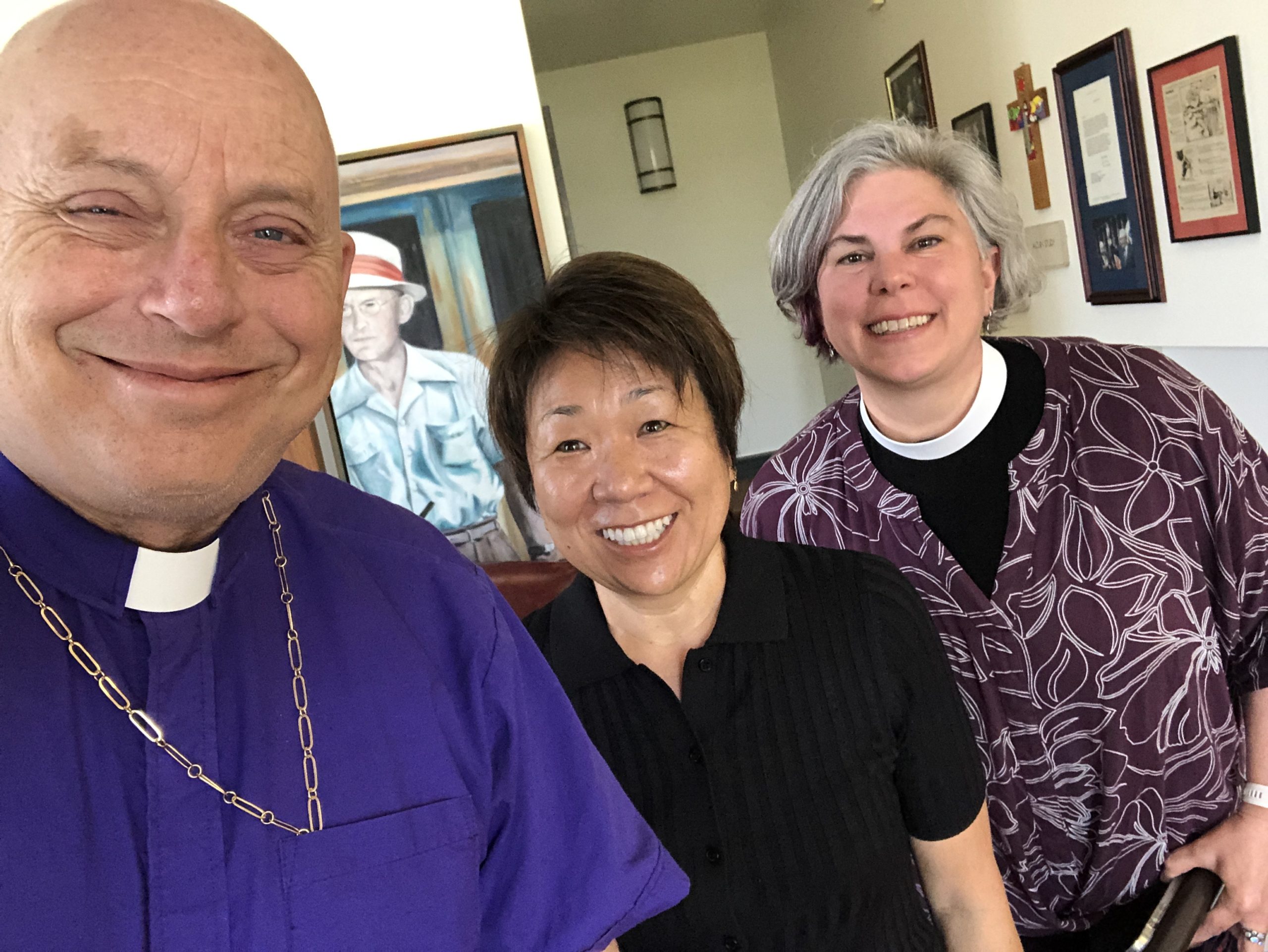 Because of the sin of mass incarceration, perhaps the greatest divide of all is between the incarcerated and the rest of us. It was a divide our Lord commanded us urgently to bridge. To best support our jail and prison ministries and all our chaplaincies, PRISM Restorative Justice and the Center for Lay Chaplaincy are joining forces. We’ll learn more at a festive fundraising event they are cosponsoring at the episcopal residence in Pasadena on Saturday, Oct. 8 from 5 to 8 p.m. Get the details and RSVP here. Kathy and I can’t wait to have you over.

These are just a few of the opportunities for fellowship, engagement, and action around the diocese. For more, keep your eye on The Episcopal News and the diocesan website. We would all of us have trouble keeping up with Queen Elizabeth’s pace in her prime; and yet staying active in our faith as she did, trying new things with old friends and new as we finally emerge from our wilderness experience, is our inescapable responsibility and opportunity. “Whatever life throws at us,” she said, “our individual responses will be the stronger for working together and sharing the load.” How Anglican. How Elizabethan! I’ll see you around the vineyard. Call or write if you need me.