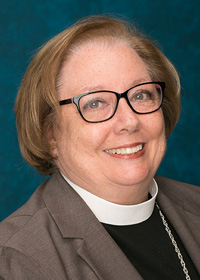 [The Episcopal News] – The Venerable Canon Charleen Crean plans to retire Oct. 16, 2020 after 34 years of ordained ministry and — like many other Southland deacons who juggle dual roles — she doesn’t rule out the possibility of future active ministry.

“There are a lot of retired deacons still active in ministry,” said Crean, 69, who has doubled as associate for the diocesan Office of Formation and Transition Ministry and as archdeacon since 2017. Often, “when a deacon retires, they rev up their ministry and have more time to do some of the other things that will support the church and its mission,” she said.

Initially, however, her focus will be on family.

Like most deacons, the former psychiatric social worker understood her twofold vocations as a way of life. “I always worked full-time in my social work career, which was very demanding and hard, emotionally draining at times, heartbreaking at others, and incredibly rewarding at others,” Crean told The Episcopal News in a Sept. 8 phone interview. “Then, with what was left over, there was church and deaconing and family. Now, it’s time for family.”

She is married to the Rev. Canon John Crean Jr., 80, who has served at a variety of Los Angeles congregations and currently is assisting at St. Thomas the Apostle Church in Hollywood. “Between us we have five children, six grandchildren and three great-grandchildren — including one I’ve never seen,” because of Covid-related travel restrictions, she said.

Crean was named associate for Formation and Transitions Ministry in 2014. In that capacity, she has helped shepherd future priests and deacons through a sometimes-grueling years-long process of individual, congregational and diocesan discernment, applications, seminary, ordination and beyond.

“It’s just been responding to what’s needed—and we all know the needs of the world don’t stop. It’s been a busy, busy time.”

Canon Hank Gatlin, who in 2017 was named the first-ever lay associate to the archdeacon, said: “Charleen is a true deacon, caring about everyone. She has been amazing … always trying to find out what people needed to know to help them in their ministry.”

She also understood “the importance of building up the deacon family,” Gatlin added. “She was always in touch, wanting to know how people were, visiting deacons when they were sick or bringing them groceries or doing something fun for them.”

That caring extended beyond deacons to congregations as well. During the massive Thomas Fire in Ventura and Santa Barbara counties several years ago, Crean led a deacon response, assisting local clergy with extra Laundry Love gatherings to aid those impacted by the fires.

It’s simply the role of a deacon, she said: “They asked deacons for help. So, we helped.” 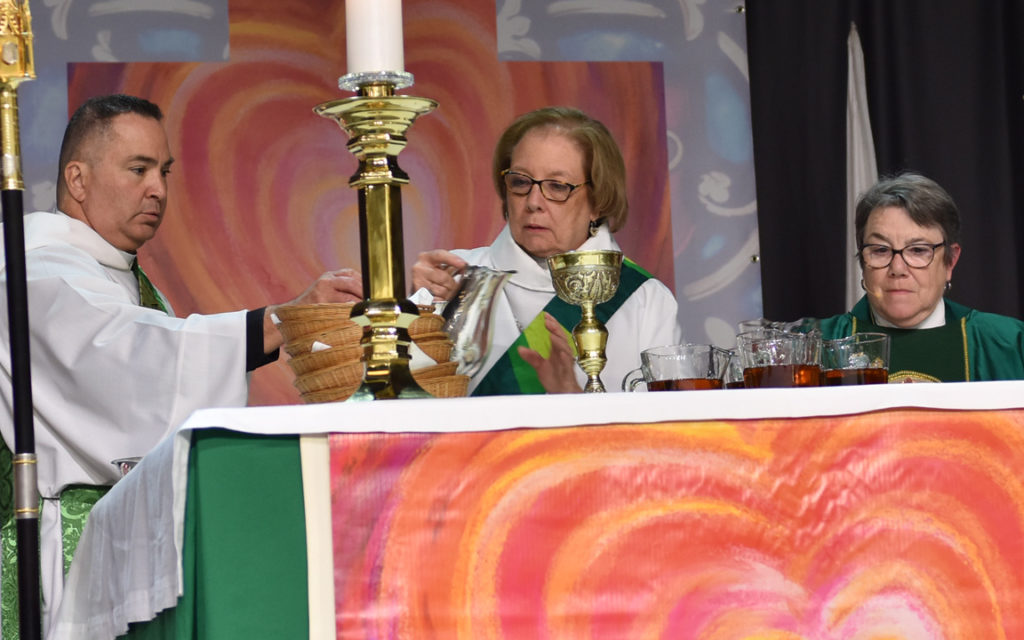 Deaconing — a model of servanthood, hope for the church

Gatlin said Crean has recognized the challenges of the often misunderstood and sometimes invisible role of deacons, because she has lived it.

“It can be very hard,” said Gatlin, a member of St. Francis’ Church, Palos Verdes Estates, who first met Crean in 2011 while co-leading diocesan Fresh Start trainings for deacons. “Deacons are very special. A lot of people don’t understand their role. In our Fresh Start meetings, something would come up that would trigger a real-life situation — someone needing food or help in some way. Charleen would open it up to our people to brainstorm and, invariably, within five minutes, you’d have phone numbers and contact points to call.

“I saw, time and time again, the resources that deacons bring, and it amazed me. They are in the world and in the church and a lot are working full-time jobs and also being asked to work in their spare time for the church,” Gatlin said.

“Charleen was always very cognizant of what that effort took and of making sure they tried to take care of themselves. She put her heart and soul into being a deacon. She lived that, every single day, being a deacon and being Christ’s minister to the world.”

“Our gracious archdeacon has been a double blessing to our diocese, as shepherd of deacons and of those discerning a call to lay and ordained leadership in the church,” Bishop John Harvey Taylor told The News. “Throughout her ministry she evinced a cheerful, practical wisdom, with her experience as a social worker lending an extra dimension to her ministry that has been a gift especially to those in crisis. While it’s hard to imagine St. Paul’s Commons without her, we give thanks that she and the other Canon Crean will be nearby when we need them.”

Born in Alabama, Crean grew up in South Florida and later moved to Hawaii. She was barely 30, a widowed single mother of two small children, when her church community perceived her call to vocation and convinced her of it.

That same community — including church ladies — made an appointment with then-Bishop of Hawaii Edmond Browning and drove her there, Crean recalled. Browning (later presiding bishop of the Episcopal Church) used a grant to pay for her education — experiences that have continued to shape her own approach to ministry, she said. For example, she and Gatlin have fund-raised to provide similar educational opportunities for other deacons.

The grants provided by Browning made it possible for Crean to attend classes at the University of Hawaii. There she earned bachelor of arts and master of social work degrees.

Crean was ordained a vocational deacon in 1986, serving at St. George’s, Pearl Harbor, while working with an interfaith program to train volunteer caregivers for the aged in their homes. She also served as a chaplain at Iolani, one of the largest Episcopal schools in the nation.

In 1996 she moved from Hawaii to Grand Rapids, Michigan. There, while serving as a psychiatric hospital administrator, she part of a team that formed the Oakerhater School for Deacons, and a deacon’s council. The school was named in honor of the Rev. David Pendleton Oakerhater, a member of the Cheyenne nation and a deacon who worked as a missionary in Oklahoma. In 1985, he became the first Native American Anglican to be included in the book of Lesser Feasts and Fasts of the Episcopal Church.

Alongside her secular vocation, Crean also served in a variety of congregations, including a new church plant where she worked with laity to build a large outreach program. She founded a food pantry at St. Paul’s in Walker, Michigan, a Grand Rapids suburb. Later, while serving at Grace Church, East Grand Rapids, she created a clothing and food assistance program for a Sudanese congregation worshipping at the church.

In 2010, she moved to the Southland, supervising the clinical practice of social workers doing outreach in the community for impoverished elderly at Huntington Hospital while serving as deacon at All Saints, Pasadena.

She has also served on the diocesan Commission on Ministry, the deacons’ council, and as a board member of the Bishop Gooden Center in Pasadena.

“There’ve been so many blessings in those years, so many moments of joy and frustration and heartbreak – like anybody’s ministry,” she said.

Deacons, visible in the world; often unrecognized in the church

“We are the only order that can completely disappear if a bishop decides he doesn’t want deacons,” she said. “We have to fight for people to hear our voices, to understand our ministry. Please, get what it is we do.”

During her tenure the Deacon’s Council has been developing a teaching series to help acquaint congregations with the role of deacons. She hopes to make it available soon via the diocesan website.

A deacon’s vocation, she said “is to be the Gospel for people who won’t be inside a church. Deacons are in the world — and almost 98 percent of what deacons do the church never sees.”

One such is the Rev. Dennis Gibbs, who directs PRISM, the diocesan ministry providing spiritual care to the incarcerated.

Crean’s love for deacons runs deep, Gibbs told The News recently. “She has a real thirst and a desire to help educate the diocese about the diaconate and to grow it in healthy ways.”

Valuing and embracing deacons’ contributions has been a hallmark of Crean’s tenure. “Fundamentally, every deacon in this diocese feels loved by Charleen,” he added.

“We feel seen, heard, remembered, cared for, and that’s huge, especially in such a big diocese where it’s easy to become one on an island. Charleen refused to let that happen. She is always looking for ways just to connect us and bring everybody together. That really inspired a sense we have a leader that cares about us.”

The Rev. Catherine Wagar, who serves on the deacons’ council, agreed. “It has been a privilege to work with Charleen. I count her as a wise and kind colleague. She has lived into the charism of a deacon in many remarkable ways. The good judgment and wicked sense of humor which accompany her many skills and talents make her a great companion on the journey. I will miss her a whole lot.”

Canon to the Ordinary Melissa McCarthy said Crean “has been invaluable for her dedicated efforts and commitment to clergy wellness. I am grateful for her years of service and hope she and John will enjoy a wonderful time of retirement together with their family.”

For Crean, service and vocation have been gifts.

“It has been a blessing, and a challenge. It has been heartbreaking and crushing at times when I needed to be broken-hearted and crushed and to remember that is the way a lot of the world feels a lot of the time. It has helped me live my faith in a different way than I ever could have otherwise. For that, I will always be grateful. I want to honor it and to say thank you for that.”

She added: “I live amazed at the power of love in this world and what it can bring when it is poured out, like food for the hungry. Which is what pushes me about the church. Servanthood makes the world pop up and go, ‘Oh, my God, there is hope.’ That has been the source of my gratitude, the hope we give each other as Christians. It is not just an idea or a notion. It actually happens.”

— The Rev. Canon Pat McCaughan is The Episcopal News’ chief correspondent. She is vicar of St. George’s Church in Laguna Hills.