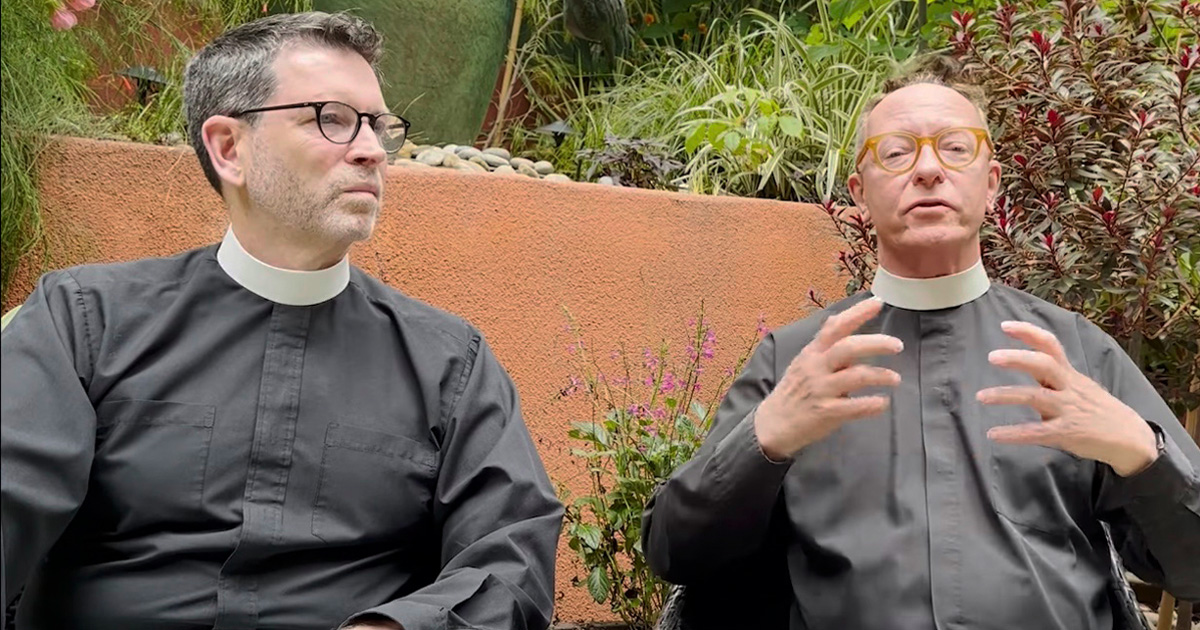 In a May 20 video message, Dan Ade and Mark Kowalewski announce their plans to retire as co-deans of St. John’s Cathedral, Los Angeles, at the end of 2022. Photo: Screenshot

[The Episcopal News] The Very Rev. Canons Daniel Ade and Mark Kowalewski, co-deans and rectors at St. John’s Cathedral in Los Angeles, have announced plans to retire at year-end after 17 years of ministry in the parish.

In a May 20 video message, Ade and Kowalewski outlined their plans to take retirement at the end of 2022 and continue to engage in priestly ministry in the Diocese of Long Island. They and Ade’s spouse, Walter Killmer, will move to Long Island in the fall.

“With Dan and Mark’s leadership, St. John’s Cathedral has become a jewel at the heart of our diocese, offering beautiful liturgy and music, hosting diocesan services, and collaborating in interfaith and other innovative programming, all the while pastoring to their lively, diverse congregation,” said Bishop John Harvey Taylor. “They and their fellow leaders have now brought the cathedral to the brink of an historic renovation and expansion. We’ll miss them, and it will be a privilege and blessing to build on their legacy.”

The diocesan Office of Clergy Formation and Transition Ministry will assist the bishop and cathedral vestry in the eventual search for candidates to succeed the co-deans, and in the process of naming an interim priest to serve the congregation upon the co-deans’ relocation.

“We have family in the New York area,” Ade said, “mine on Long Island, and Mark in Connecticut, so it will be a wonderful place to live and explore new opportunities.”

Kowalewski reflected, “After serving my entire priestly ministry in this diocese, making this change will be bittersweet. I certainly will miss the blessing St. John’s and the Diocese of L.A. have been in my life. Moving to a totally new place will be invigorating. I trust the Holy Spirit will open new doors.”

“It has been a wonderful grace-filled opportunity to be at St. John’s for all these years,” Ade added. “I will always cherish the relationships I formed that have transformed my ministry as a priest.”

Ordained to the priesthood in the Diocese of New York in 1992, Ade served congregations including St. Thomas’, Fifth Avenue; St. Peter’s, Peekskill; and St. Luke in the Fields, Greenwich Village. In the Diocese of Los Angeles, he was rector of St. Paul’s, Pomona, from 2003 to 2006 before commencing ministry at St. John’s.

Kowalewski, having received a doctorate in religion from USC in 1990, was ordained in 1996 by Bishop Suffragan Chester Talton. Kowalewski assisted at St. Wilfrid of York, Huntington Beach, until 1999 when he was named chaplain to then-Bishop Frederick Borsch. Thereafter, Kowalewski served as diocesan clergy deployment officer and was named canon theologian by Bishop Jon Bruno. Kowalewski is the author of the 1998 book Gays, Lesbians and Family Values among other works.

After Bruno designated St. John’s the diocese’s procathedral in 2007, Ade and Kowalewski shaped liturgical offerings to include large-scale celebrations of diocesan ordinations and confirmations in addition to weekly and monthly services, including Compline. The co-deans also joined with community partners in expanding interfaith and civic services, and in providing ministries serving neighbors in need.

The co-deans have guided St. John’s in pursuing a mixed-use development project set to include housing on the city block surrounding the cathedral, located at 514 W. Adams Blvd. at the corner of Figueroa St., north of the USC campus. The project plan includes repairs and updates to the landmark St. John’s sanctuary, which was completed in 1925. More about St. John’s is online here.