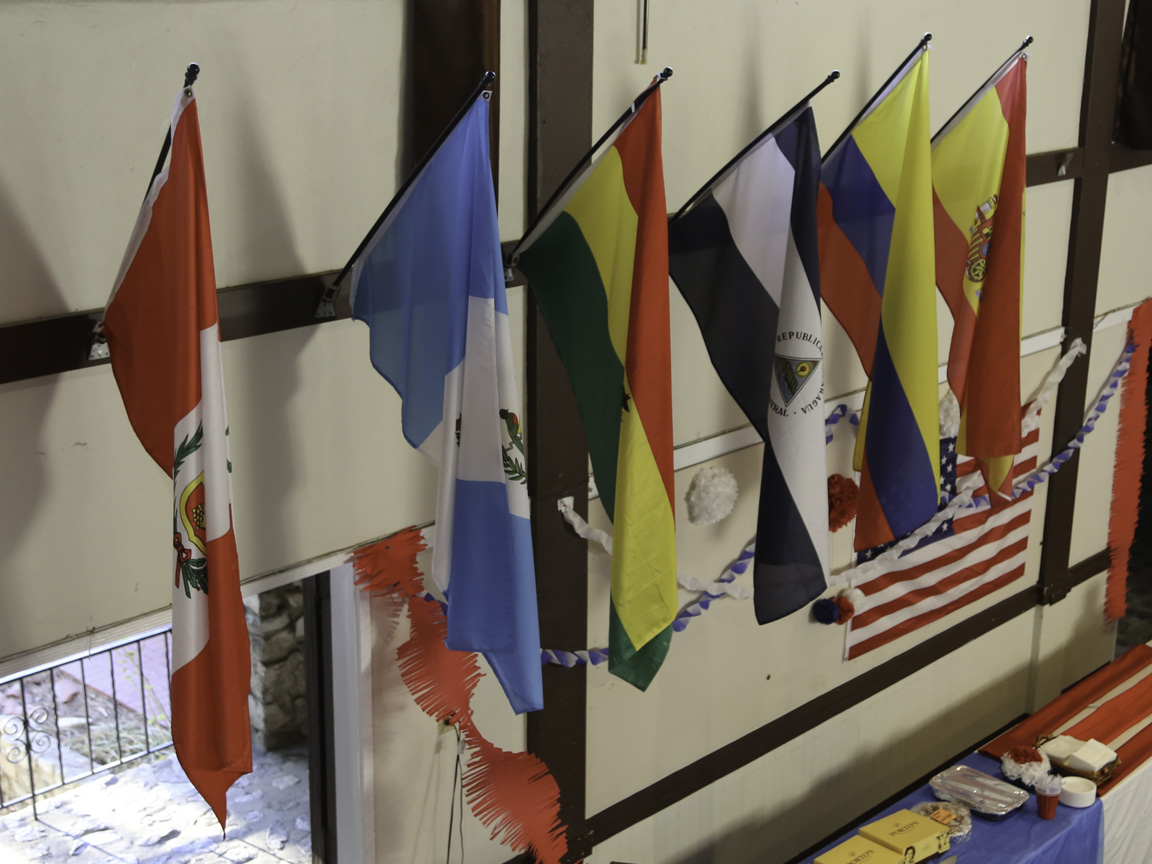 Flags in the parish hall represent nations from which parishioners at St. Luke’s Church, La Crescenta, and their families came. From left are flags of the Latin American nations of Peru, Guatemala, Bolivia, Nicaragua and Colombia. The sixth flag represents Spain. Photo: Janet Kawamoto 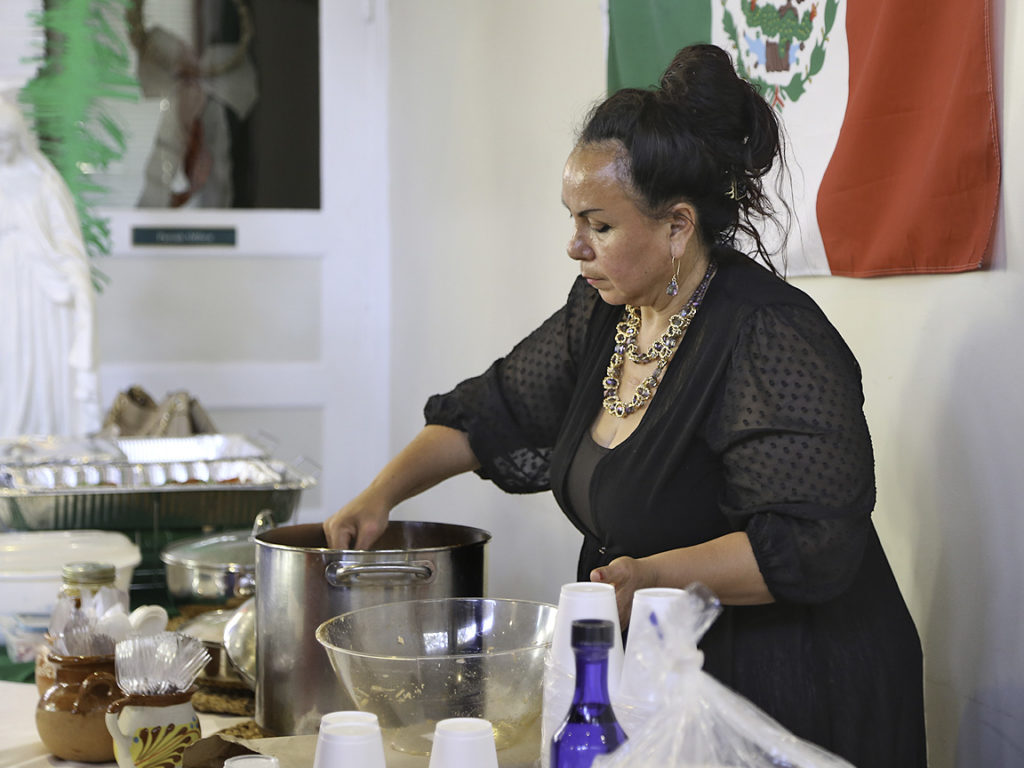 A member of St. Luke’s, La Crescenta, prepares a dish from her native Mexico for the congregation’s Sept. 23 Latino Festival. Photo: Janet Kawamoto

[The Episcopal News] Maria Jimenez happily displayed a pan of layered enchiladas – Northern Mexican style, with “not too spicy” red chile sauce – that she’d prepared specially for the celebration of Latino/Hispanic Heritage Month at St. Luke’s of the Mountains Episcopal Church in La Crescenta.

“Typically, I fry an egg and put it on top,” Jimenez told The Episcopal News on Sept. 24 as the joyous sound of mariachis and the delicious aroma of Salvadoran pupusas and “pastelitos de carne” (empanadas); Guatemalan chiles rellenos; savory, chocolaty Oaxacan mole; cactus salad; drunken salsa; and chicken posole, filled the church hall. 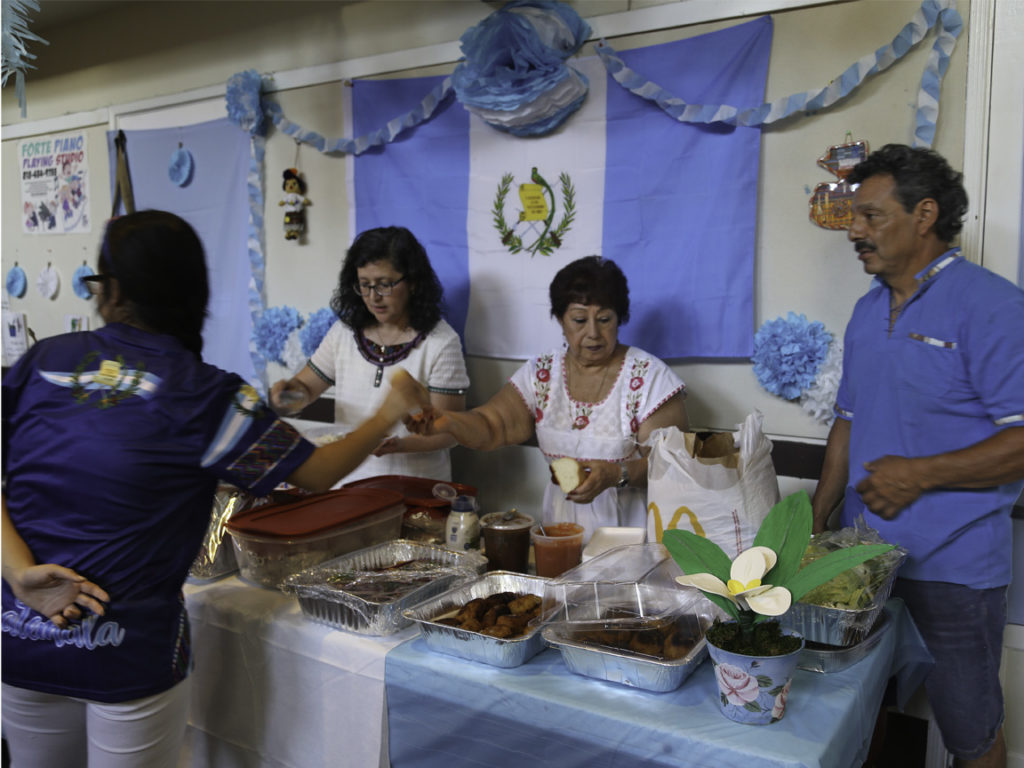 Handmade paper flowers and table decorations were color-coordinated with mounted flags, representing parishioners’ countries of origin – blue and white for El Salvador, Nicaragua, and Guatemala; red, green, and white for Mexico; and red, white, and blue for Puerto Rico, Cuba, and for the United States because, “We are celebrating our heritages,” Jimenez said.

While celebrating the Sept. 15 – Oct. 15 Latino/Hispanic Heritage Month, “We wanted to include the USA, because we are Mexican American,” Jimenez said passionately. “Along with the English-speaking congregation, we are one. Before, there was a separation, but not anymore. We have been so looking forward to this day. This is home for us; we have made the most beautiful community and friendships. I consider everyone here my family.” 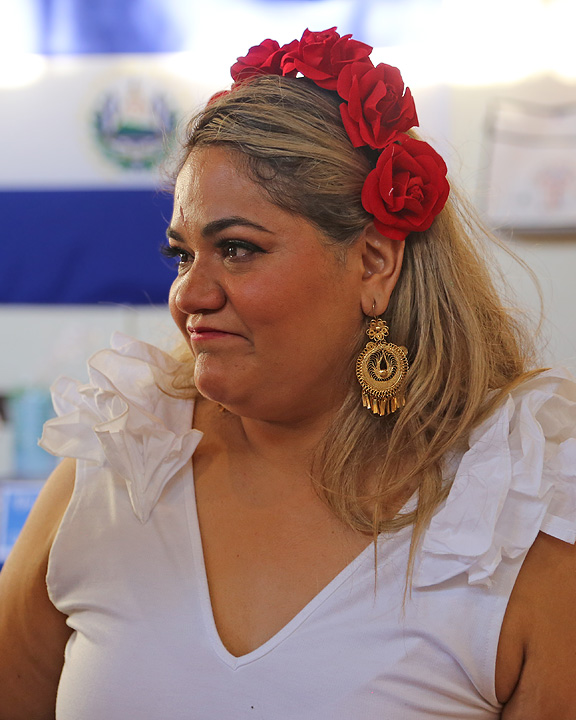 At the Latino festival, Maria Jimenez of St. Luke’s describes her congregation’s unity amid diversity. She wore an outfit representing her native Mexico. Photo: Janet Kawamoto

Although at least 30 congregations in the Diocese of Los Angeles, and about half of the 100 U.S.-based dioceses in The Episcopal Church offer some form of Spanish language worship, the effort may be too little, too late, according to the Rev. Canon Anthony Guillen, The Episcopal Church’s director of ethnic ministries and missioner for Latino/Hispanic Ministries.

“I hear stories that are heart-wrenching; powerful stories of people encountering Jesus for the first time in our churches, of feeling accepted and loved, feeling they’ve found a spiritual home. It’s happening all over the church, but it’s not fast-growing. It’s slowly developing,” said Guillen, who formerly served as rector of All Saints Church in Oxnard in the Los Angeles diocese.

“The projection is that by 2060, one in every three Americans will be Latino. The need is urgent now if we’re going to reach Latinos.”

Congregations and dioceses must address language and other issues contributing to that sense of separation, and offer creative alternatives to church structures to effectively engage Latinos, say Guillen and diocesan clergy in Spanish ministry. 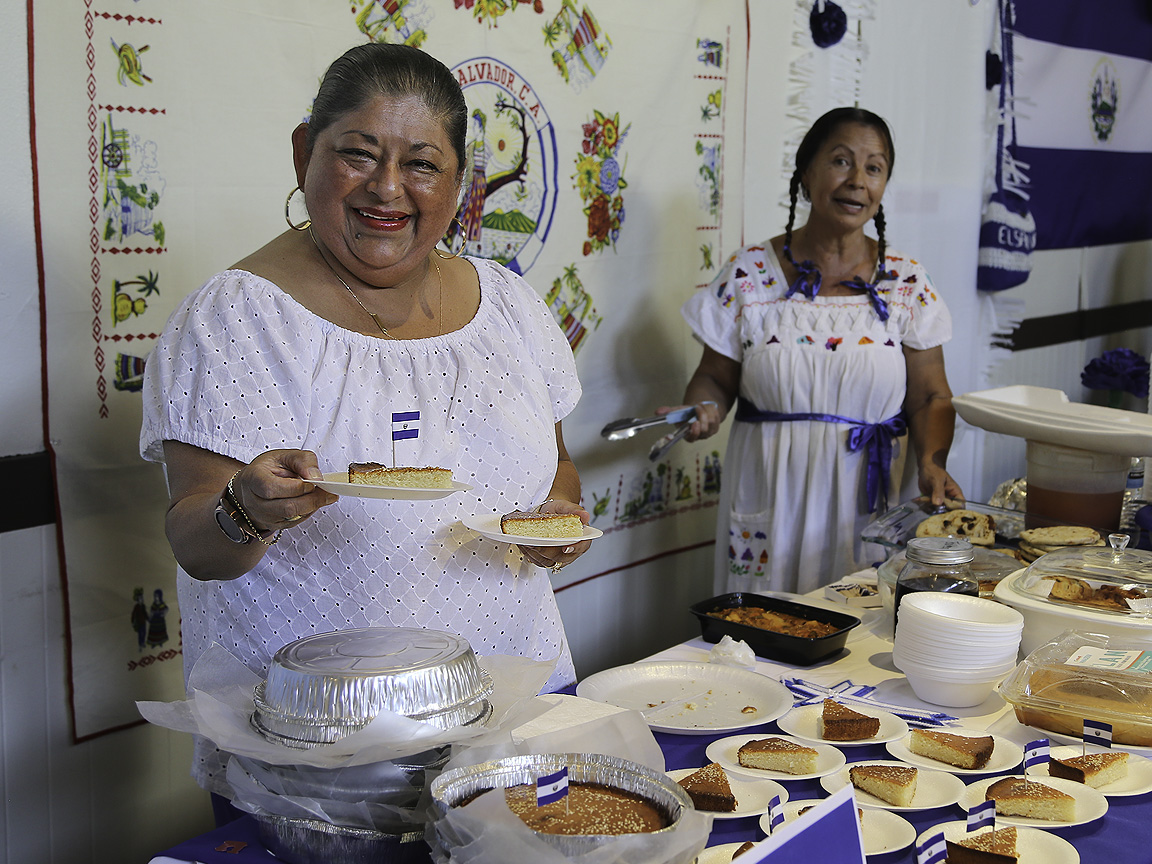 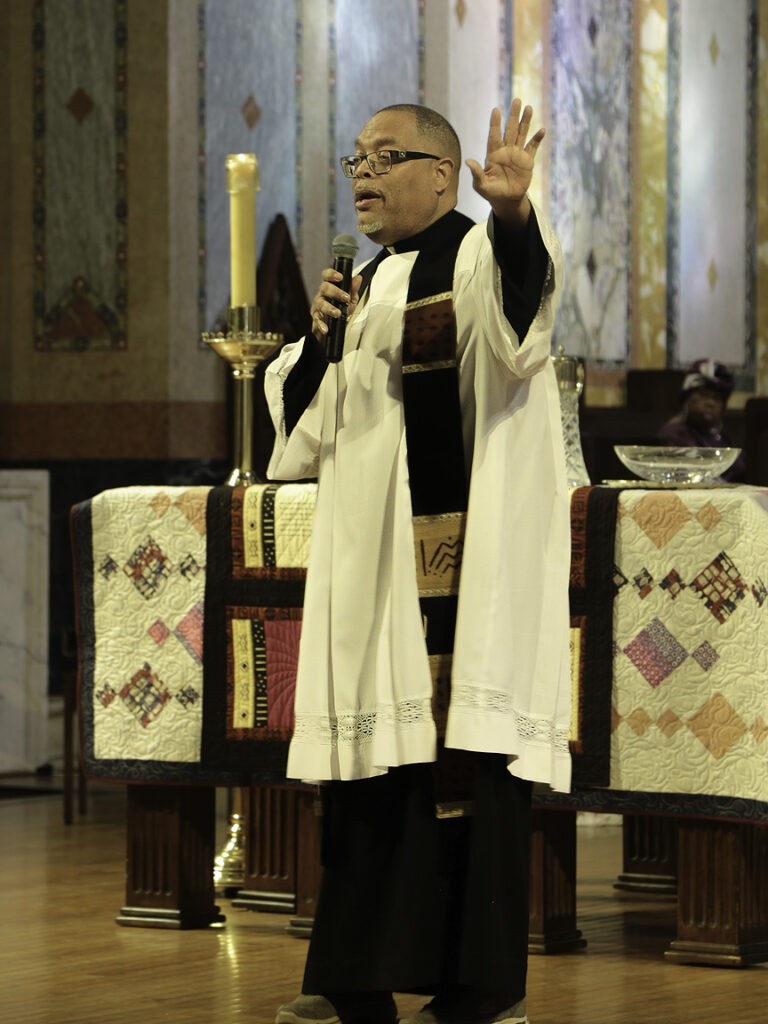 The Rev. Guy Leemhuis delivers a sermon at the Diocese of Los Angeles’ first Juneteenth Evensong in 2022. “We as a people have been ‘invisibalized’ for hundreds of years, all the way up to today,” he said. Leemhuis, who is of African and Latin heritage, is involved in ministry by and to both communities. Photo: Janet Kawamoto

No ‘church within a church’

For the Rev. Guy Leemhuis, priest-in-charge at St. Luke’s, La Crescenta, simply shifting “from saying English-speaking and Spanish-speaking services is both intentional and helpful, because they’re all members of the church.”

“Often, historically, the church has tried to mold the Latino congregation into an existing power structure, which is predominantly Anglo,” said Leemhuis, who has Afro-Mexican heritage, and who typically offers a Sunday 10 a.m. service in English and noon worship in Spanish and bilingual worship on special occasions.

The Rev. Abel Lopez, rector of the Church of the Messiah in Santa Ana, who offers several Sunday services, including 12 p.m. worship in Spanish, said such nuances contribute to a deeper sense of belonging.

“We no longer say ‘the 12 p.m. congregation’. It is one congregation. It’s multicultural and from now on we refer to the members who go to the noon service. It is helping people of different language and culture to feel a part of the church, not like a church within a church, or a ministry ranking in the church.” 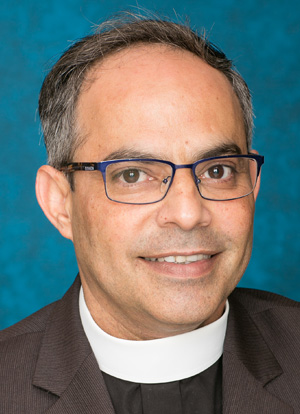 After his arrival as Messiah’s rector nine years ago, Lopez eliminated a separate leadership committee, which existed in addition to the vestry, and oversaw the Latino community.

“Rather than have a parallel structure, I increased participation of Latinos on the vestry,” he said. “We’re not half and half yet, but this year we’re getting close, so all voices and needs are heard at the vestry level.”

Lopez has also encouraged “every member of Messiah to go to all the services, and more have done that. It’s about creating not a church within a church, but an entire congregation where everyone feels they belong.”

Adapting existing church structures is vital, he says. “The question is, how open are we to do things in a different way, not the traditional, typical Episcopal polity? How much are we willing to be changed in order to embrace everybody? We tend to go with the dominant culture in the way we do things, (yet) … different cultures have different ways to accomplish the same thing.” 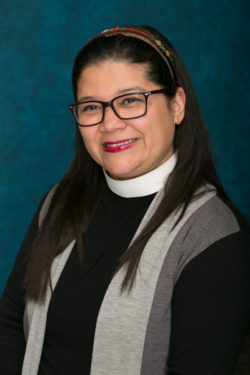 Norma Guerra, is associate for Formation and Transition Ministry for the Diocese of Los Angeles – and its sole Latina priest. Photo: Cam Sanders

Guillen said bishops, diocesan commissions on ministry and other church bodies can seek creative alternatives, especially to help alleviate a churchwide critical shortage of Spanish-speaking clergy. “The canons are not very descriptive of how the process has to work; they just give a framework, yet dioceses have chosen to make them heavy-handed, making it difficult for people of color to get through the process.”

The Rev. Norma Guerra, associate for formation and transition ministry in the Los Angeles diocese, said currently there is one Latino in the diocesan ordination process.

Cultural differences, lack of understanding of church polity, language barriers, ineffective communication as well as documentation are all factors that may inhibit prospective clergy, she said.

“Culturally, we are different as immigrants; there are so many things that make it difficult. I am bilingual. I am open to having a conversation with everyone who feels the call or knows someone who might be ordained. Sometimes we need to hear it from somebody else. I hope that we can encourage and empower people, that they feel affirmed. It’s not a quick journey or an easy journey, but it is full of grace and God’s surprises, a beautiful journey.” 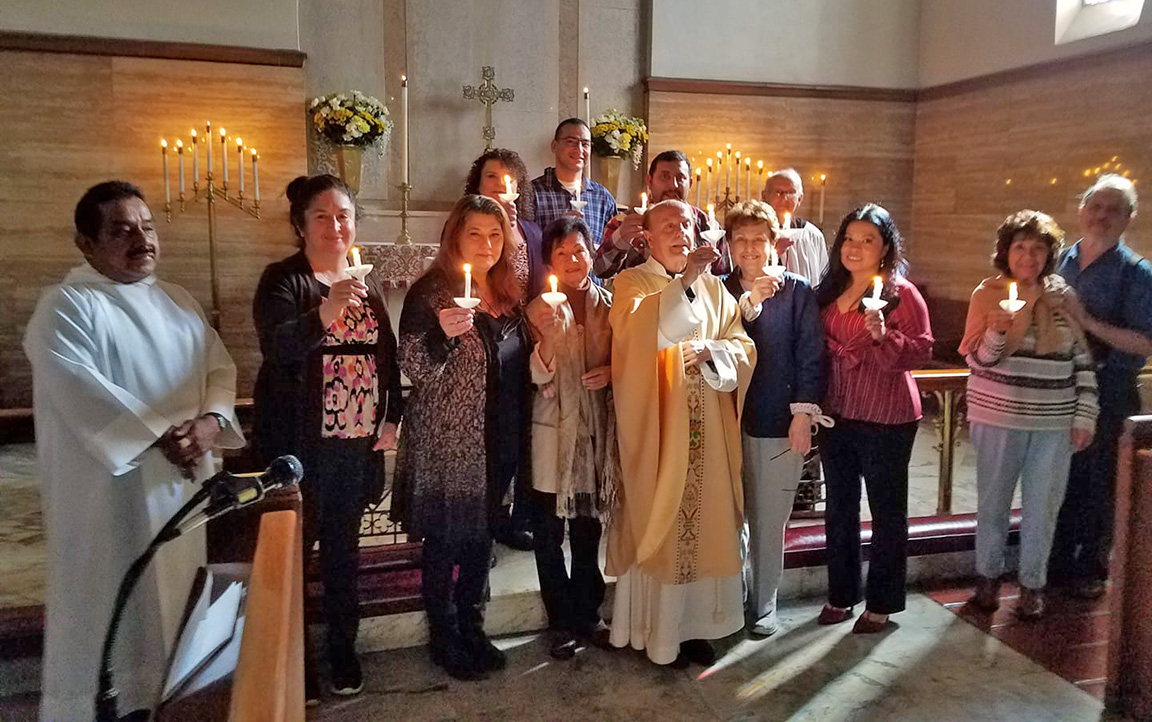 Eduardo Bresciani leads a Candlemas service at St. Margaret’s Church, South Gate, where he has been rector since 2005. At Candlemas, celebrated on Feb. 2 (The Presentation of Christ in the Temple), candles and Christ Child figures from family nativity sets are blessed – a beloved tradition in many parts of the world, including Latin American countries. Photo from Facebook

The Rev. Eduardo Bresciani, 71, became rector of St. Margaret’s Church in South Gate in 2005, and has navigated the post-pandemic online world effectively, livestreaming a Facebook service in English that has garnered as many as 800 views and community-wide recognition.

“I post my service in five different cities in the area,” says Bresciani, who was born in Santiago, Chile. “It’s incredible. I go to the park, the store and people ask me, are you the Fr. Eduardo I’ve seen on Sundays?”

For the 60-something members who worship in Spanish, every week is Latino heritage week, Bresciani said. “We celebrate year-round, with meals, not just an event in September,” he said. 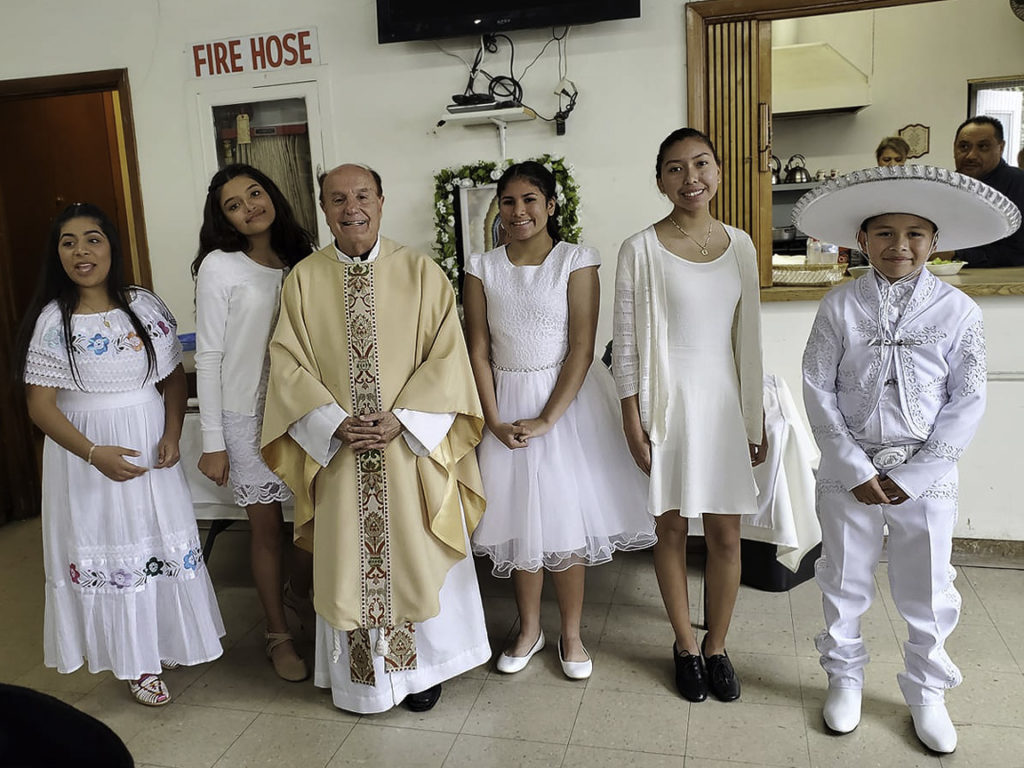 Bresciani introduces a first-communion class at St. Margaret’s. His congregation includes Salvadorans and Guatemalans, and a few Nicaraguans and Peruvians. Photo from Facebook

Cultural sensitivity is key, Bresciani added. “My congregation is not Mexican; it is mostly Salvadoran, and Guatemalan, with a few Nicaraguans and Peruvians. They speak the same language, but some words mean different things in different countries. We also celebrate the pre-Hispanic heritage of people, which is very important … the Aztec, the Mayan.”

He added: “We can participate in Christian formation in English; our children can participate in regular Sunday school and youth group, but we probably still want to worship God in Spanish. The church needs to be aware of that presence, to learn enough about the culture to accommodate us.”

Guillen has developed a series of resources for congregations and dioceses to aid outreach to Latino neighbors, including New Camino, or New Way, and the Episcopal Latino Ministry Competency Course, offered in English. A theological formation program he has crafted in collaboration with the Iona Collaborative has trained about 450 people in six years, he said. 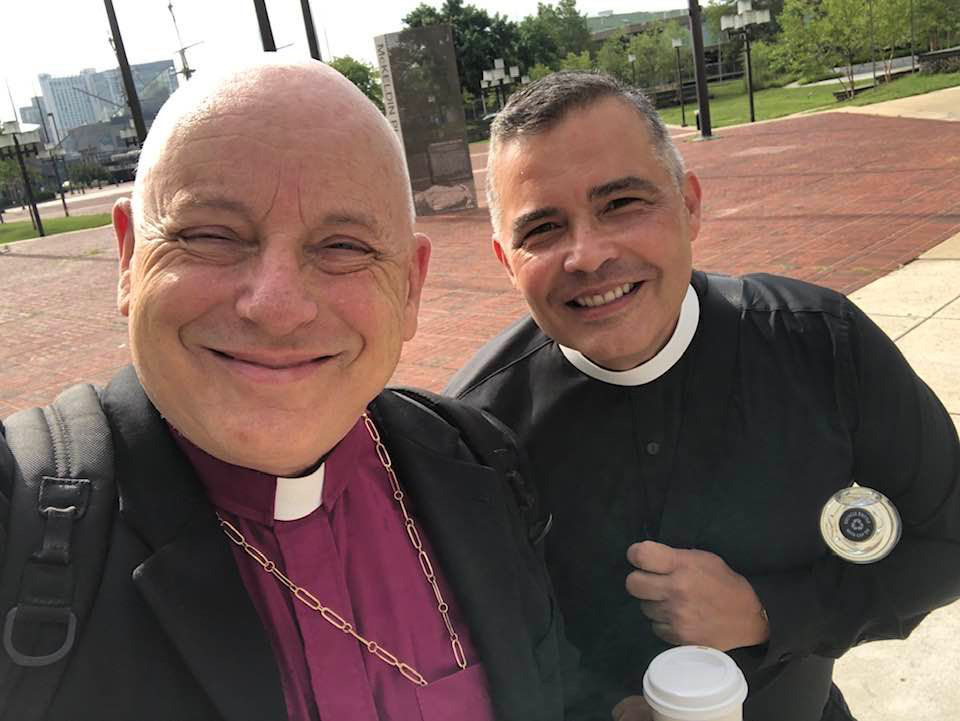 Although St. Luke’s Church in Long Beach has offered Sunday worship in Spanish for at least two decades, steady growth has been elusive, the Rev. Antonio Gallardo, rector emergent, told The News recently.

“It comes up; it goes down. The highest attendance has been about 40; the lowest is five. I’ve seen the same thing at other churches, too.”

Uncertain of a reason, he recalls that a friend visiting in Long Beach entered a Roman Catholic church and, “it looked like a Mexican church inside, and there were hundreds of Latinos there every Sunday … (perhaps) we are trying to put new wine into old wineskins, and it’s not working.”

Gallardo and the Rev. Jane Gould, rector, created an innovative model, with diocesan approval, to share leadership currently. Eventually, Gallardo will take the reins as rector. “Because of who I am, the expectations are much higher for me, as they are for women and other people of color,” he said. “It’s a reality. For us, the standards are so high.”

He remains hopeful in generating creative solutions to traditional barriers “that are more Eurocentric and don’t really fit with too many cultures. There’s always a potential to change. It is important to know that the church could be enriched if it were more open to learn and embrace the traditions and cultures that make up the church.” 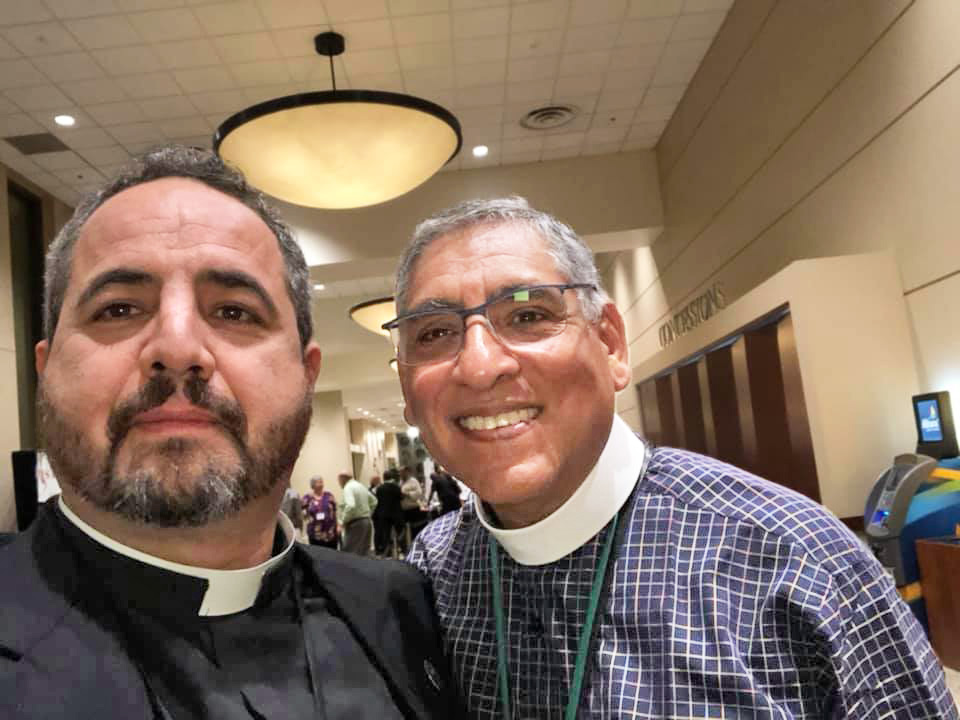 Inclusion is about more than welcoming different cultures, it is about collaboration and belonging, he added. “Let’s not be afraid to be curious and learn and try on things that we might not be used to. We’re called to do that, to live out of our comfort zone and see what else the Spirit has for us.”

Guerra, the daughter of retired Guatemalan Archbishop Armando Guerra, agreed. “We don’t need to hide our differences. We should embrace them; they make us better, they make us grow.”

“That’s not just for my Latino community or the Anglo community; it’s for everywhere we are, to listen and there will be a change, a transformation that’s happening. The Holy Spirit, through smells, noises, different colors, different experiences – it happens.”

Guillen agreed: “The future of the church is just like this country; multicultural – all of us together, using our gifts, our resources, to build up the Body of Christ. I’m committed to it. Congregations are committed to it. We’re going to see this through. There are a lot of faithful people out here doing some pretty heroic and amazing work, and I try to learn and share it wherever I go.”