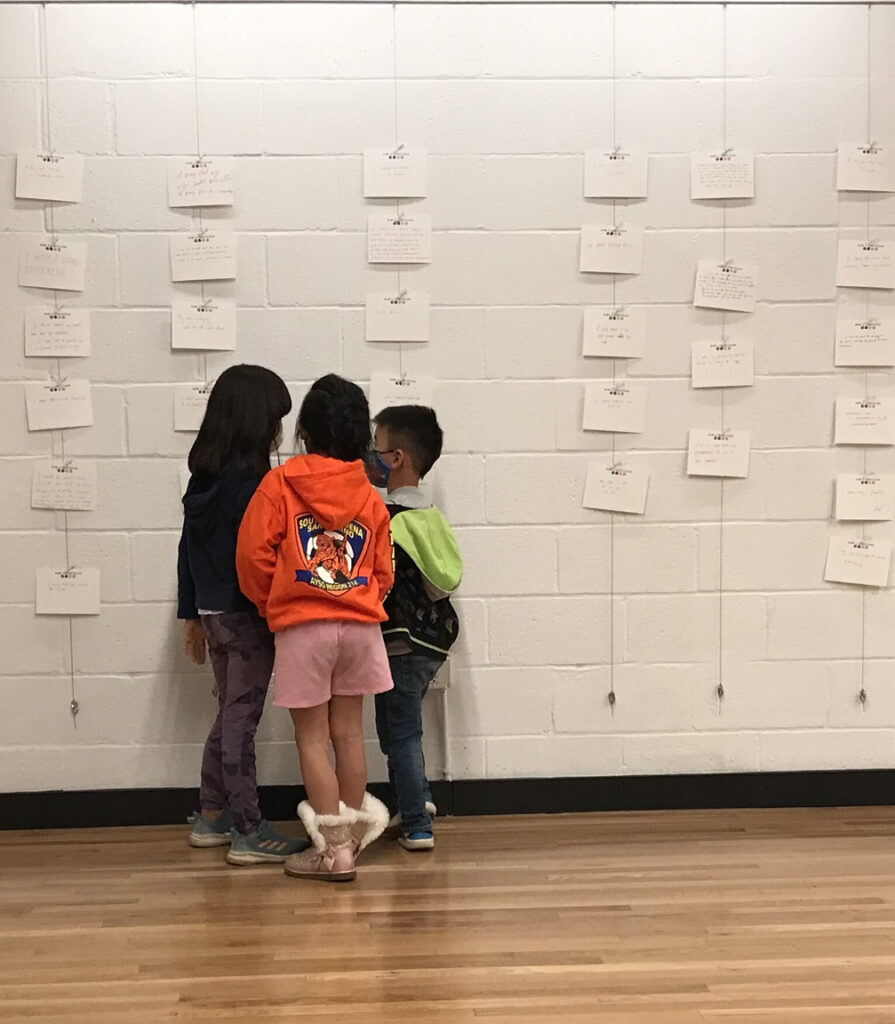 Children read comments and confessions posted on the wall at a “Confessions for All Humanity” pop-up center in San Gabriel. Photo: Jana Milhon-Martin 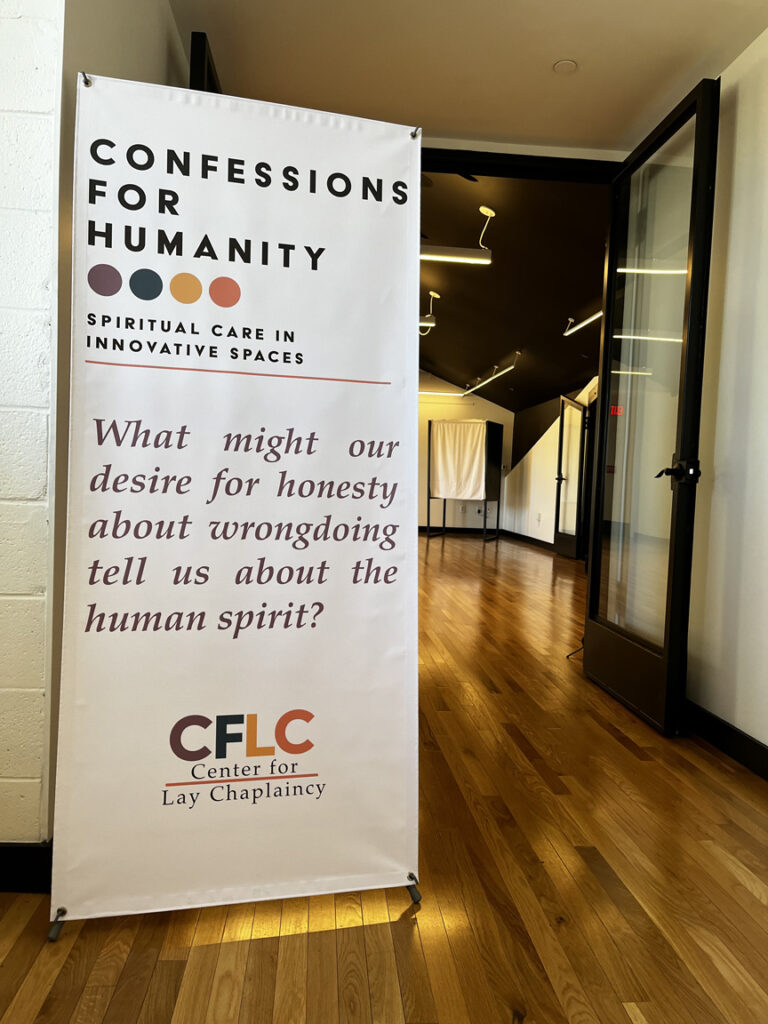 A banner invites the curious and penitent to the pop-up confessional booth sponsored by the Center for Lay Chaplaincy. Photo: Jana Milhon-Martin

[The Episcopal News] The Rev. Jana Milhon-Martin believes confession is a great way to unburden the soul – she just doesn’t think it always has to happen inside a church.

So Martin, director of the diocesan Center for Lay Chaplaincy (CFLC), has created a pop-up “Confessions for All Humanity” experience, located, at least until the week of March 23, in San Gabriel, where the Blossom Market Hall donated space for a month.

The experience includes a confessional resembling a voting booth, Wednesday lunch and dinnertime listening stations, and a painted plywood wall. Whimsically or seriously, penitents may step inside the booth, commit their sins to CFLC post-its, and fix them to the wall.

Some have already sought reconciliation: “Sometimes I treat my cat better than my husband.”

Or, “I miss my toxic friends.”

“I eat too much ice cream.”

The “Chaplaincy Now” pop-up confessional grew out of a larger initiative to make the ministry of listening, and the training for it, more widely available to the general public, Martin said. The center, funded through the Episcopal Diocese of Los Angeles and Trinity Church Wall Street Philanthropies, makes clinical pastoral education, formerly reserved for clergy, available to the laity.

But “Chaplaincy Now” is about “getting people out into spaces where they can bring the things we have that the world needs”; spaces such as parks and community gathering spots – even campuses, Martin said. 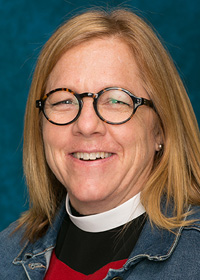 Besides a courtroom or recovery setting, where else “in the larger cultural landscape are people invited to reflect on their regret, their guilt, or what they feel remorseful about? Nowhere,” she said. “There’s not a place for that.

“So, how can we invite people in, if even for a moment, to think about, consider what things they regret?”

To provide radical welcome, Martin and the center’s chaplain trainees have created mobile listening stations, setting up at MacArthur Park, in Echo Park near St. Paul’s Commons, and elsewhere.

Zheng, 38, who is training to become a Buddhist chaplain and working on a doctorate at the University of the West in Rosemead, uses a pop-up tea house as a way to offer spiritual care.

“I am a tea drinker, and I’ve always believed the best gift you give people should be the thing you love the most,” says Zheng, in a You Tube video describing her ministry.

She and Fong Sam met in the chaplaincy program, got married, and together “go to random places, public spaces, like parks, or Union Station or Pershing Square in Los Angeles,” she said.

With PVC piping, fabric, a kettle and cups, “we set up a tea station and invite people to come and have conversations. After a cup of tea, we notice that people begin to relax,” she said.

“They loosen up, they tell their stories, what has happened in their lives. We see people change, from the moment they sit down to the moment they leave, there’s a lightness that’s entered them. They seem happier. We’re not imposing anything on them, and we are not asking anything of them, but it feels like they take something away from the experience.”

Most importantly, Zheng said, “People feel acceptance, respect. The tea house helps create a safe space to be open, to put down the burden of their life” and creates a universal understanding.

“The tea house has brought me together with different races, genders, social backgrounds, sexual orientation, languages,” she said. “There are some guests that cannot speak English at all, but we share the same moment of their life. It brings the confidence of chaplaincy that language is not the only tool and the most important tool for chaplaincy.”

Sam said he overheard “someone asking about chaplaincy. People don’t have a firm grasp of what it is, but Jana and Jessica are taking chaplaincy directly to people’s daily lives and turning the definition on its head and redefining what it could mean in the 21st century.” 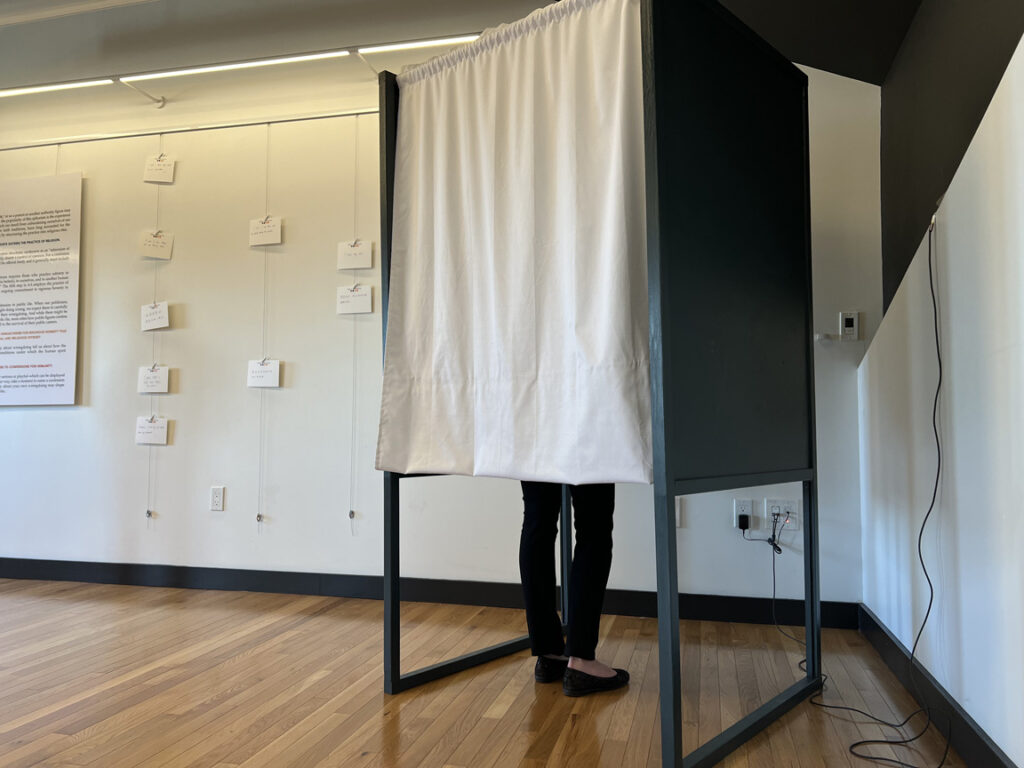 The confession booth offers privacy to people stopping in to write down their sins or concerns before posting them to the wall. Photo: Jana Milhon-Martin

Eventually, most Americans won’t consult clergy in a house of worship, but in a variety of other places, according to Martin, in a You Tube video describing “Chaplaincy Everywhere.”

Possibly even in malls.

“There have even been school-aged kids who come in and put confessions” on the wall, she said. “It’s been a place where people are able to, either playfully or seriously … unburden themselves in ways they may not have expected to.”

The idea of such radical welcome can be “risky and vulnerable business, to take spiritual care out to where people are,” added Martin. “You show up, make yourself available, and there is no shelter of a pulpit, of a sanctuary. There’s no shelter of an ecclesiastical authority. Nobody cares that I’m a priest.”

Yet, she says, “It feels critical that we find ways of supporting and developing lay ministry like we do ordained ministry,” she added. 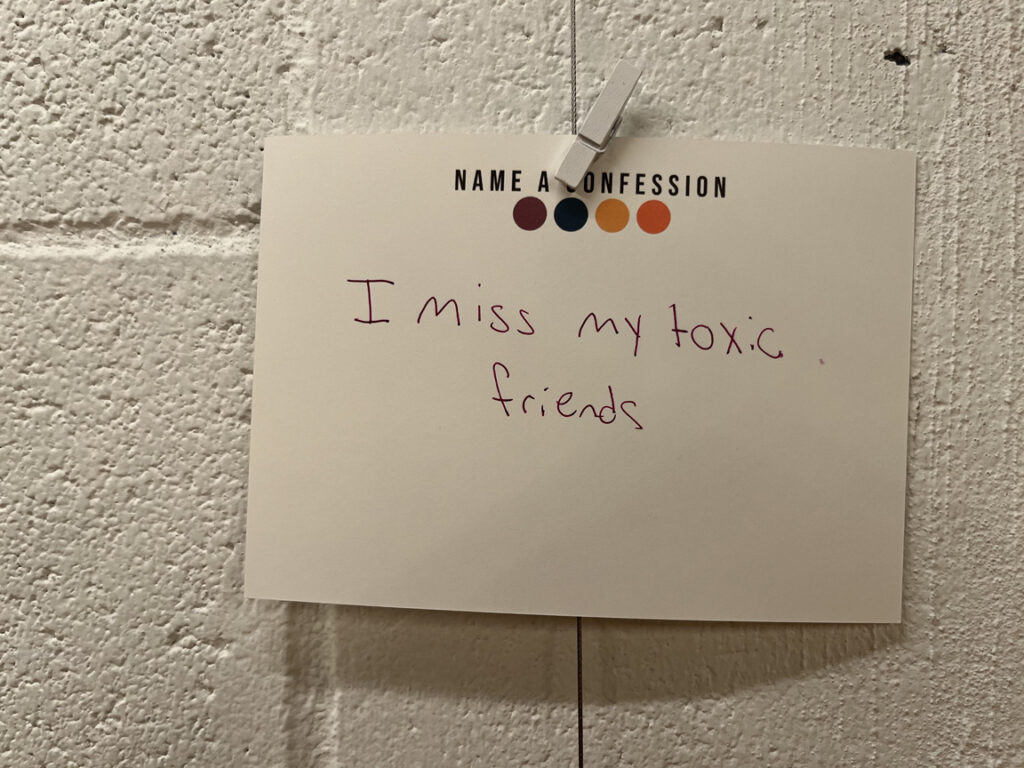 This comment is one of many posted on the wall at the pop-up “Confessions for All Humanity” center in San Gabriel. Photo: Jana Milhon-Martin

Zheng said her doctoral dissertation will focus on “how the tea ceremony can be a new tool or model for spiritual care in the west. I want to use this research to encourage people like me to find their own gifts from their traditions and return [them] to the world. If I can do that, everybody can be a chaplain.”

CFLC will offer fall courses at various locations around the diocese beginning the week of August 21. They are open to lay leaders, regardless of educational experience and, Martin hopes, will be available in both Spanish and Mandarin as well as English. Applications are due the week of July 3, followed by interviews the week of July 10.

Says Martin, “The CPE facilitators that are being trained this year are working to establish listening stations and pop-up chaplaincy sites at ministries throughout the diocese (think shower programs and Laundry Love). We’d love to have parishes collaborate in these efforts.”

For more information about CFLC and its programs, visit its website here.