Despite Covid-19, Christmas joy and worship will go on in congregations 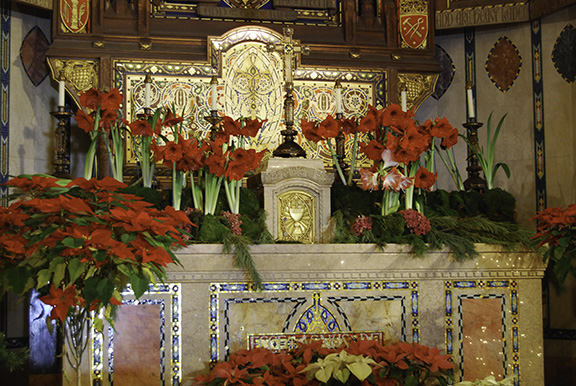 In prior years, the altar at St. John’s Cathedral in Los Angeles was decked beautifully for Christmas. In the pandemic year of 2020, churches won’t be full of people, but will extend worship into the homes of parishioners and others via the internet as well as socially distanced in-person gatherings. Photo: Janet Kawamoto

Worshipping this Christmas may be with masks and in parking lots or online via Zoom and Facebook, but clergy and leaders of Southland congregations say “Silent Night” will still be heard, the Virgen de Guadalupe will still be venerated, and Jesus will still be present — in the creche and in spirit.

From Santa Ana to El Segundo to Thousand Oaks, congregations are preserving traditional commemorations of the miracle of the Nativity from Christmases past, and are forging new rituals through the present marvel of technology.

Celebratory opportunities abound, beginning with the traditional observances of the feast of the Virgen de Guadalupe. Bishop Suffragan Diane M. Jardine Bruce and the Program Group on Hispanic/Latinx Ministries invite the diocesan community to join a 6 p.m., Saturday, Dec. 12, virtual celebration. The service will feature Oscar Alcántara from All Saints Church in Pasadena, who will share religious-historical data about the Virgen. The service will be offered in Spanish with English interpretation. 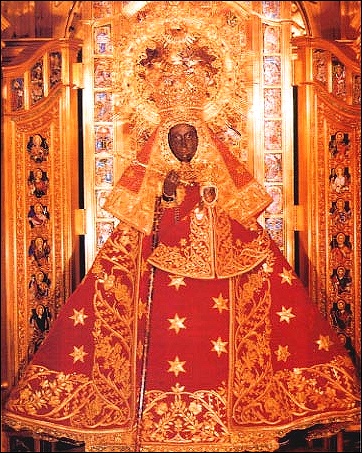 A Black Madonna is revered in the Monastery of Santa Maria de Guadalupe, in the town of Guadalupe, in Extremadura, Spain. Photo: Wikimedia Commons

The feast commemorates four visitations of the Virgin Mary to Juan Diego and another to his uncle, Juan Bernardino, in 1531 in Tepeyac, now a suburb of Mexico City. Images of the Virgen in Spain include a Black Madonna, revered in the Monastery of Santa Maria de Guadalupe, in the town of Guadalupe, in Extremadura.

The Rev. Abel Lopez, rector of the Church of the Messiah in Santa Ana, said the congregation chose to keep a 5 p.m., Dec. 12 bilingual virtual celebration of the Virgen while letting go, in this difficult year, of Las Posadas and some other services, because “there have been lots of pastoral requests to ask the Virgin for protection.”

“We went down the list of all the services we do every year and, the choices came down to the most essential ones, with higher attendance, where people feel more nurtured,” Lopez told The Episcopal News recently. “Church members who go to the Spanish service here have a strong faith in Guadalupe and they said, more than ever, we need that service.”

Las Posadas, or “the inns,” is a festival celebrated in Mexico and the U.S. Dec. 16 – 24, commemorating the journey of Joseph and Mary from Nazareth to Bethlehem in search of safe refuge so Mary could give birth to the baby Jesus.

Messiah has downsized its typical four Christmas Eve offerings to two Zoom services, at 6 p.m. and at 9 p.m. “On Christmas Day, we will join Bishop Diane’s service at 10 a.m.,” he said.

Bruce will lead an online “Christmas Around the Creche” service at 10 a.m. on Christmas Day for the diocesan community. Bishop Diocesan John Harvey Taylor will officiate at a virtual diocesan service of Lessons and Carols with virtual Eucharist at 10 a.m. on the first Sunday in Christmas, Dec. 27. Both services will be available via the diocese’s Facebook page and YouTube video channel.

In a twist on the traditional Lessons & Carols service format, The Gathering: A Space for Asian Pacific American Spirituality, will offer “The Advent Gathering: Lessons, Carols & Fellowship,” 4:30 – 6 p.m. on Saturday, Dec. 12. The diocesan community is welcome to join the online service, which will feature Asian Pacific American-themed reflections and music set to Advent themes of hope, love, joy, peace, and Christ.

In El Segundo, the Rev. Dina Ferguson said St. Michael the Archangel Church has been worshipping Sundays via Facebook Live online but is taking a deep dive into a “first-time tech project” for Christmas Eve.

Citing her family’s lengthy history with Camp Stevens — Ferguson and her children were campers and camp counselors, as were her sisters Patsy Brierley and Cathy Clement — she purchased an auction item, three hours of tech support, during the camp’s recent fundraiser.

“Since the opportunity came through the Camp Stevens auction, it just seemed like it was meant to be a God incident,” said the enthusiastic Ferguson. “We were meant to have a pageant this year, even if we couldn’t have it in person.”

Viewers will still hear such classics as “The Snow Lay on the Ground” and “O Come, All Ye Faithful.”

“We won’t be able to be in church, but we will be able to see the church” at the 4 p.m. Dec. 24 service, said Ferguson, whose screen role includes her videotaped welcome, wearing vestments from inside the church, to the retelling of the nativity story.

There will be no Eucharist but there will be “a wide sense of maintaining community, even though we can’t be together physically.” Through the marvel of technology, she said, 33 separate shots will be edited together from participants who have self-recorded their parts locally and from as far away as Canada and Ireland.

The segments range from a husband-and-wife duet of “Mary, Did You Know?” to a vestry member offering intercessions and children’s parts — including, Ferguson said, Ciaran, who recorded his reading in front of a Christmas tree wearing a Kermit the Frog hat.

“This is clearly a homemade project,” Ferguson said. “But these are our kids and their personalities and character come through and they are wonderfully adorable to watch.”

Ferguson added: “Community is one of the things that is so hard for us, in this time. Yet, through technology we can see these kids, who’ve obviously changed and grown over the last nine months, when we haven’t been able to see them. It really is a way to be in community when we can’t be in-person. I am so grateful to the parents who said they wanted to do this.”

Lindy Markarian’s daughters, Zoey, 12, and Ava, 9, are retelling the annunciation story together, and Zoey is singing “Gabriel’s Message.” She said they were “more excited about what they should wear and where in the house was the best place to record the video so we had the best view,” than they were concerned about foregoing in-person worship.

“They really got into it. They rehearsed it the same as if they were rehearsing to be in the church,” she said. “They wore their usual Christmas Eve dresses, a little formal dress they would normally wear to mass.”

Markarian said although she is disappointed about not worshipping in person, Jesus’ biblical promise “that where two or three are gathered” is a great reminder “that it doesn’t necessarily matter if we’re in gathering in person or online with Zoom or Facebook. It only matters that we come together … still maintaining the routine and tradition and unseen order of our lives.”

Ferguson said embarking upon the project, “really is making my Christmas season. Because there so many dark places in this season and just the idea that we can do this, is lots of fun. It is just amazing.”

The rectors of Emmanuel Church in Fullerton, St. Margaret’s Church in San Juan Capistrano and St. Nicholas’ in Encino say they will offer both courtyard in-person worship following Covid-19 safety protocols as well as online opportunities.

“It will be very different from last year’s Christmas celebration, but we feel the Holy Mass must be celebrated on such a feast day,” said the Rev. Michael Cooper, St. Nicholas’ rector.

“These are very trying times for all of us, but we are trying to keep everybody’s spiritual side up,” he added. “We are also livestreaming Adoration and Benediction every Wednesday night at 6 p.m. as kind of a mid-week spiritual break, and we have been getting almost 300 people watching that. We are very happy that so many people seem to want and need that time of silence in their lives right now.”

A poll of Emmanuel Church members in Fullerton revealed a majority wanted “a 4 p.m. service in the parking lot,” according to the Rev. Holly Cardone, rector.

“Hopefully, the sun will go down enough so we can still light candles for Silent Night,” she said. “Our musicians will play. We space them 10 to 12 feet apart, due to the size of our parking lot. We have two singers who can safely socially distance themselves from each other. The altar guild will be decorating our easy up shade coverings and we will no doubt have a lot of poinsettias, so I think we’re good to go.

“We are focusing,” she added, “as a community, on being the church in any circumstance we find ourselves in. It’s been a great spiritual lesson, not being in our building which we are so identified with. Turns out, worship can happen anywhere and everywhere.”

Edwards acknowledged the difficulties of the season even in a “normal” time. At a time when people; are already dealing with losses, memories of Christmases past, he realized, “this season is going to be really important. Christmas is already a tough season; we wanted to make sure we responded to that. So much has already been taken away from people.”

For the Rev. Yein Kim, rector of St. Alban’s, prerecording Advent Lessons and Carols and a Christmas Eve service in the sanctuary “will be the first time for me since I started in June” after the initial March 2020 Covid stay at home orders.

The services will all “be streamed on our YouTube channel … at the same time as we would have done it last year for some consistency.”

In Placentia, the Church of the Blessed Sacrament will live-stream 4:30 p.m. worship and an 8 p.m. candlelight service with special music on Christmas Eve.

Viewers will be able to sing along with classic carols and Christmas hymns at home, accompanied with livestreamed organ and piano accompaniment, said the Rev. Barrett Van Buren, rector.

“It will be a glorious evening that will provide all viewers the opportunity to engage, fellowship, worship and fully participate spiritually in our dignified and sacred Holy Eucharist. We are doing everything we can with God’s help (and those with some technical savvy) to bring the Good News of our Lord’s birth into the homes of every parishioner and visitor possible.”

At St. Patrick’s Church in Thousand Oaks, the Rev. George Daisa said the pageant will go on in spite of the pandemic as a video presentation of a pre-recorded “Christmas Godly Play Story.” A 7 p.m. Christmas Eve family service will incorporate special elements of what would have been 5 p.m. and 9 p.m. worship, “including Christmas hymns sung by our cantor, and imagery from the greening of the church.”

In Whittier, St. Matthias’ Church will offer 5 p.m. and 10:30 p.m. Zoom and Facebook worship services, according to the Rev. Bill Garrison, rector. Similarly, a 10 a.m. Christmas Day will combine online worship and videos from previous years services as “we will try to emulate normal as much as possible.”