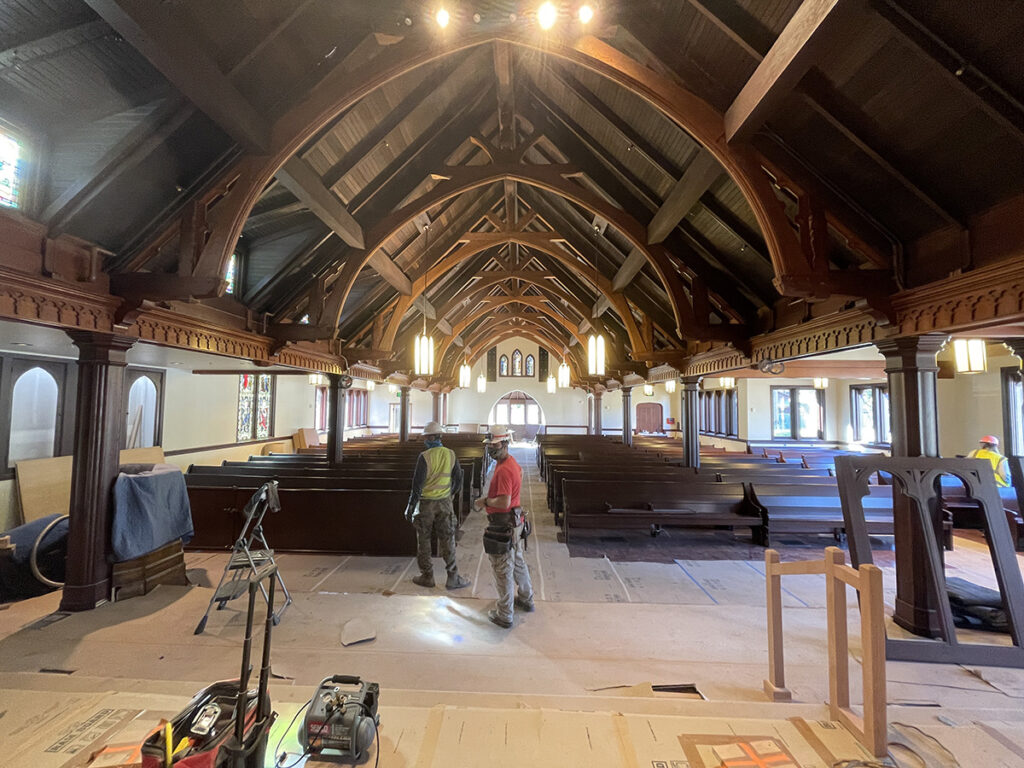 From Montecito to Big Bear, from Tustin to Highland Park, church construction projects
have persisted, even in the time of pandemic.

A seismic retrofit and sanctuary preservation project at All Saints by-the-Sea Church in Montecito began in 2016 with removal of the 119-year-old church bell and refurbishing of its iconic tower. The tower “had subfloor supports that no longer reached the ground,” recalled the Rev. Aimée Eyer-Delevett, rector. “It turned out, it was pretty much stones piled around rubble with mortar that, in some places was cracking. There was no structural support at all.”

The wooden Craftsman-style church, originally built in six weeks and last updated five years after the 1925 earthquake, desperately needed renovation. “The foundation had settled away from the building” and the walls were bowing outward, Eyer-Delevett recalled. During construction the roof was supported by shorings. “We got to the point of having completed demolition of a number of walls and you could see through the church from almost any angle.”

The area’s 2017 devastating Thomas fire, the deadly 2018 mudslides that jolted the sanctuary into serving as an emergency shelter, and the 2020 pandemic slowed but did not halt progress on the $10 million project, now nearing completion. “We know how to respond to a crisis. We’ve been living it for three years,” she said.

Chip Nichols, All Saints facilities committee chair, said the overall project included numerous upgrades. A “wheezy pipe organ” was replaced with a digital one, freeing space to create an indoor columbarium. New lighting, sound and livestreaming systems were added, altar rails were lowered from the chancel to the nave level to improve accessibility. Pews and flooring were refurbished. 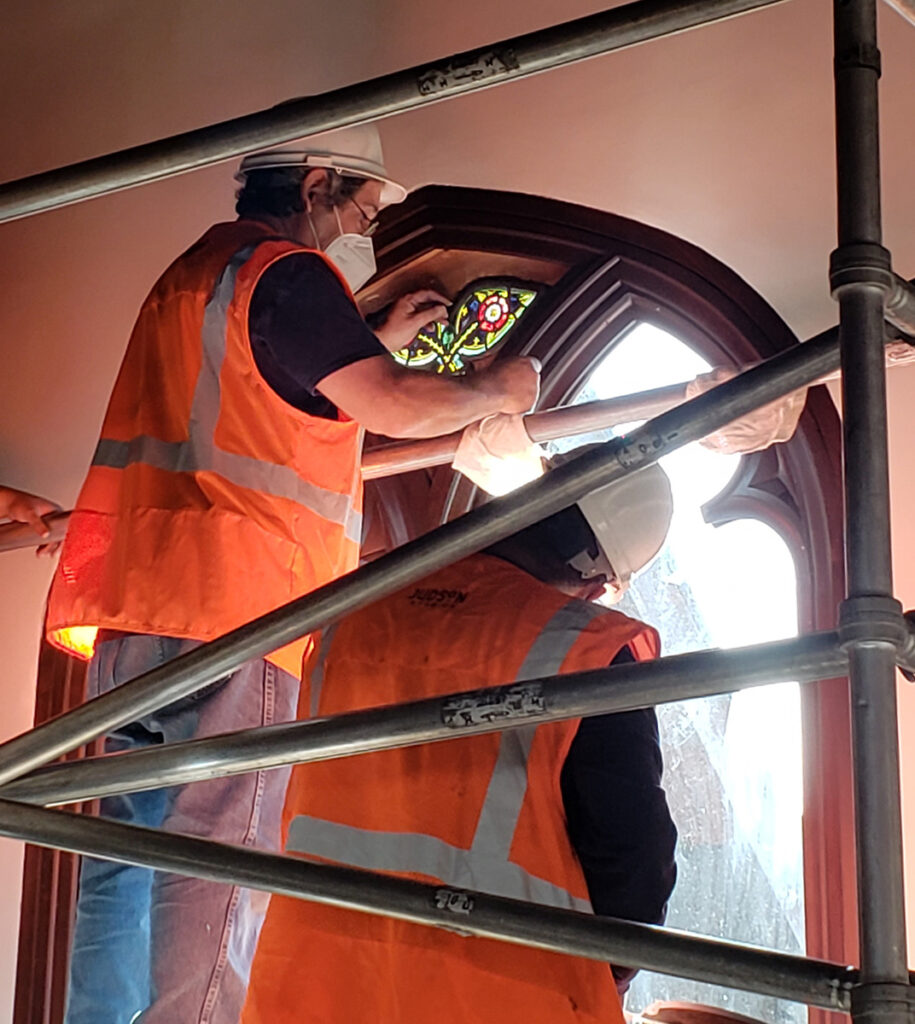 All Saints’ stained glass windows are reinstalled after restoration work by Judson Studios. Photo: Courtesy of All Saints Church

There were other complications – the church’s historic status meant replicating its former appearance – and coordinating construction with the church and parish school community as well as neighbors, Nichols told The Episcopal News recently. “We will have accomplished it. The church will look exactly the same but, from the inside, we know the new steel girders and beams and frames have been seismically designed to withstand a 7.5-Richter earthquake.”

Once construction began on the nave, worship moved to the parish hall. During the pandemic, it moved online, Eyer-Delevett said. There are plans for a big All Saints Day celebration, the pandemic permitting, with Bishop Diocesan John Harvey Taylor presiding over a dedication ceremony.

“We are in the home stretch,” she said. “We’ve been out of the sanctuary for two years. The new organ is going in, the stained-glass windows are going back in right now, and the audiovisual equipment, the furnishings. Getting the altar guild sacristy put together when people are supposed to be socially distant—these will be new, interesting challenges as we figure out how to do the simple things.”

The project’s completion is a tremendous statement and act of faith, she added. “Despite fires, mudslides and pandemic, the congregation and leadership have continued to move faithfully, courageously, wisely, patiently, forward toward this goal and, not for the building’s sake, though it’s a lovely building.

“But so we can continue to do the work of God in this corner of the world because … the people who come to church need to have their lives strengthened and hopes renewed and souls restored by gathering in community to praise God, and to confess our fears and failures and be fed with the bread of life so we can be sent back out into this broken world and do the restoring work of Christ.” 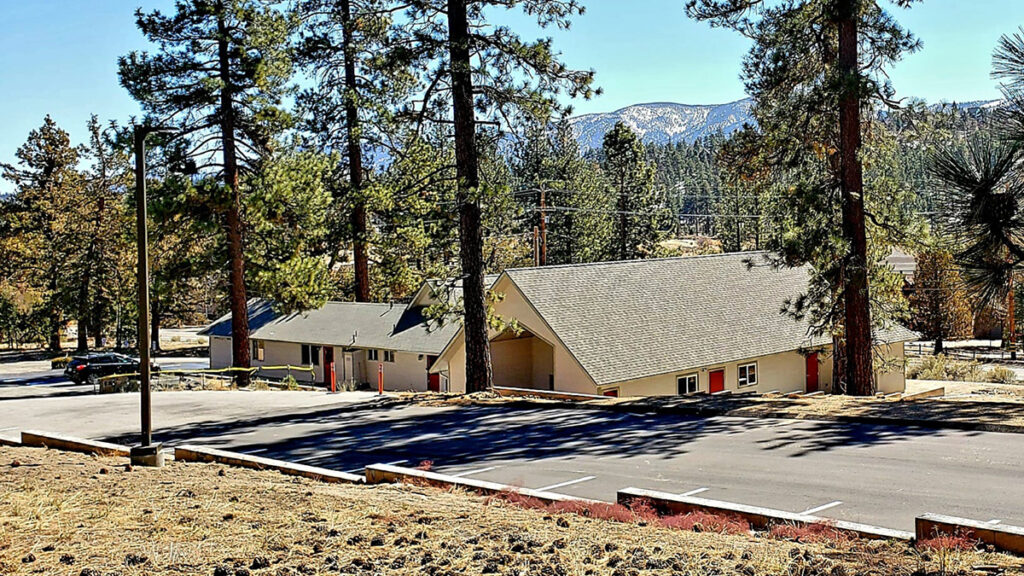 The construction of a new sanctuary and upgrades to office and parish hall space have transformed St. Columba’s mission congregation in Big Bear Lake “from looking like the storage building for the Roman Catholic Church next door – literally that’s what people thought we were – into the look of a real church,” says the Rev. Stuart Swann, vicar.

“People driving by will definitely see we’re a church,” with the new 2,600-square-foot A-frame sanctuary nearing completion. “We have been worshipping in a space the size of a glorified mobile home, built in the 1970s and 1980s. The bathrooms were part of the sanctuary. This is huge, not to have people have to leave and flush toilets in the middle of the liturgy.”

Among the windows salvaged from closed churches that are being installed at the new nave at Big Bear Lakes is this one of the mission’s namesake, St. Columba. Photo: Clare Zabala Bangao

Mary Wilson, a 12-year member and building committee chair, credited the contractor’s “amazing job. Knowing our budget constraints, he did a lot of extras for free. He had a cabinet maker make gorgeous communion rails for us and special framing for the stained glass.”

The $700,000 project was initially conceived in 2007, and with “plan adjustments and many fundraisers later, we are just about finished,” she said. “We will have a beautiful new church, simple in design, but enhanced by lovely stained glass given to us by the diocese, and custom paint treatment inside. Our old church will be used as parish hall space which we desperately needed.”

Canon Clare Zabala, diocesan coordinator for missions, recalled making the 204-mile round trip, from St. Paul’s Commons in Echo Park to help deliver the windows to the church in July 2020. They were part of a diocesan inventory of items donated or recovered from churches, she said.

A window depicts St. Columba – one of many “acts of grace,” Swann said. “Nobody has stained-glass windows for St. Columba and yet here they were. And there is one with Jesus tending sheep in front of a lake with mountains behind it. I couldn’t believe it – with mountains. That is our setting. We are very thankful for those windows and are trying to figure out how to fit them in.”

The congregation, with a pre-pandemic average Sunday attendance of about 40, raised $400,000 and, with diocesan and other funding, will complete the project with about $100,000 in debt, he said.

“That’s part of the miracle of it – 40 people raised close to $400,000,” Swann said. ‘The exciting part is, we are the largest community center for recovery groups by far and we are also probably the largest in terms of food outreach to the community. People really look to St. Columba’s for that and our expanded facility will help continue that and the other ministries we can finally do.

“It is huge to finally have a devoted fellowship hall,” he added. The old building will become the fellowship hall and community gathering area where, pre-pandemic, more than 20 recovery groups met weekly, he said. “We are looking forward to new possibilities for doing the ministries we longed for but never had the space to accommodate,” Swann said.

“We will see a real expansion of the Episcopal presence in Big Bear, once the pandemic is over.” 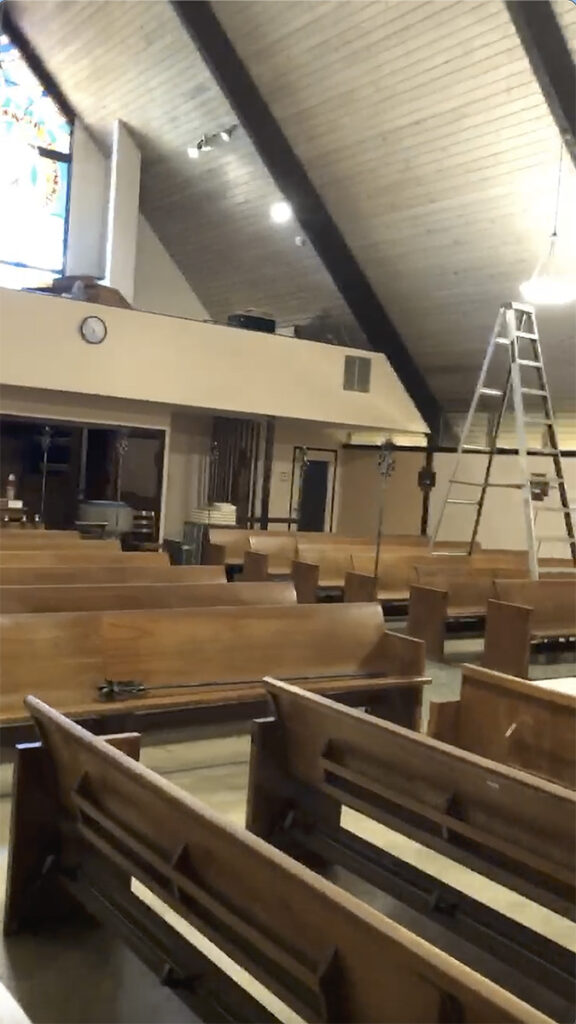 Renovations are in progress at All Saints Church, Highland Park (Los Angeles), mostly carried out by its vicar, Otto Vasquez. Photo: Screenshot from a video by Otto Vasquez

When a local company priced refurbishing parish hall floors at $7,500 for All Saints Church in Highland Park, the Rev. Otto Vasquez, a general contractor, opted to just do it himself. With help from the congregation’s members and others, Vasquez has been painting office space, repairing rotted wood in interior and exterior windows, even patching and resurfacing the kitchen roof.

Similarly, the pandemic construction slowdown afforded Vasquez extra time for additional upgrades to the 114-year-old building as well as a nearby rectory: “I’ve returned the altar to its original place, and recarpeted,” as well as completed exterior work on the church and rectory, he said.

“What I am thinking is that I can do it, and thank God for that, because it’s going to be easier for the next priest,” said Vasquez, a parishioner for 25 years before he was ordained a priest in 2019 and assumed leadership of the congregation.

“To me, it’s a challenge. It can be done. It’s just a matter of doing it,” said Vasquez, who goes to the church in the afternoons and works until dark.

Vasquez’ renovations are valuable not only for the sake of worship, but for the church’s sustainability, according to parishioner Dan Valdez.

“We depend heavily on the income generated from leveraging our property and working with local non-profits and other community groups,” says Valdez, a church business management consultant who also chairs the board of the Episcopal Community Federal Credit Union. “Because we have limited use of meeting spaces on campus due to COVID-19 restrictions it just makes sense to prioritize the repairs and cosmetic improvements. The enhancements make the property more appealing and in doing so allows us to request reasonable rates for use of the space.” 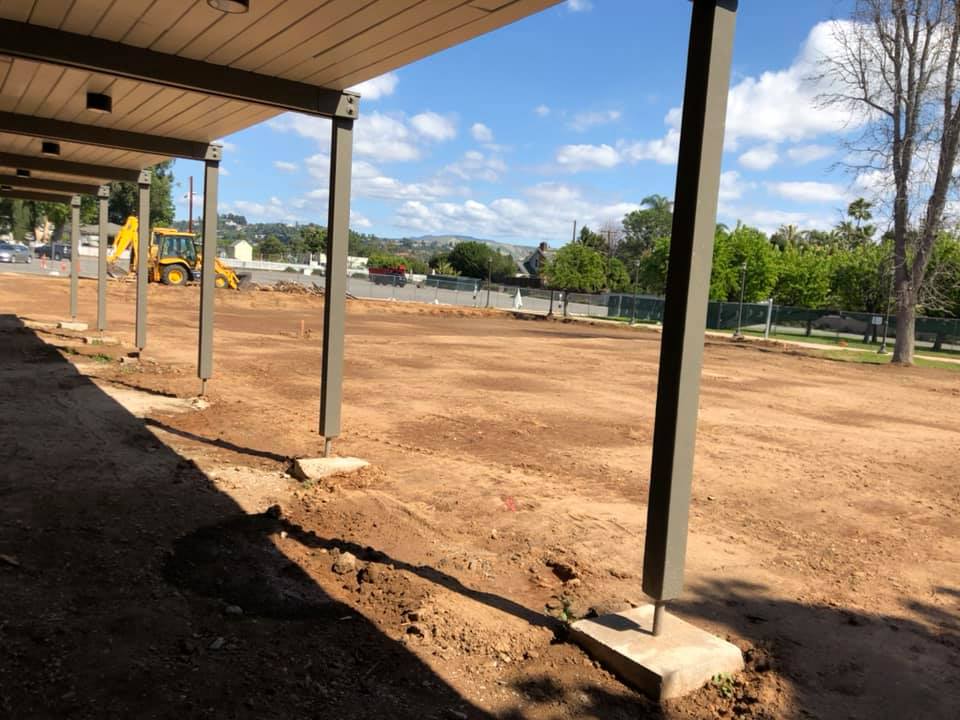 At St. Paul’s Church, Tustin, the ground has been cleared and construction begun on extensive renovations that will include new office space, a rebuilt patio, and a “nearly commercial” kitchen to aid the congregation’s Sunday dinner program. Photo: Courtesy of St. Paul’s Church

A $2.7 million construction project at St. Paul’s Church in Tustin means exchanging a donated former bank drive-through for a 3,000-square-foot prefabricated modular space, according to the Rev. Kay Sylvester, rector.

“Our office that was just knocked down last week was a bank drive-through,” she said. “Our treasurer, 50 years ago, became aware of a bank drive-through that was going to be thrown away. He negotiated its donation to St. Paul’s, and they came in and set it down on the property. There’s no foundation, it was set down on decomposed granite. It was meant to be temporary.”

Now, “we’ve torn out our entire patio and are redoing it with permanent shade sail structures” to offer comfort to campus visitors and guests of the congregation’s outdoor feeding program. Other work involves leveling uneven pavement, refurbishing the parish hall and upgrading its kitchen to “nearly commercial.”

Critical to the project’s success was the aid of Episcopal Church Foundation consultant Jerry Campbell, who guided launch of a capital campaign that garnered $2.3 million in pledges and other funding sources, she said. Along the way, there were surprises and a few setbacks, requiring a healthy contingency fund.

Like replacing an electrical switch that inspectors deemed too close to the building. “That ended up being about $70,000,” she recalled. “It wasn’t in our budget, but we had to have it done, it was mandatory. No one saw that coming.

“If you have a building that’s over 20 years old, you’re probably going to find things that are out of code, things that are functioning for you just fine, but that don’t meet the current code,” she added. “And those things are going to have to be addressed.

“Our biggest surprise, … because of the new construction, was you have to add at least the electrical for an electric car charging station. And the other surprise was … we are mandated to pay a school tax on any new construction. And there’s no exemption for churches. It wasn’t a huge budget item, but it was just those things kind of keep coming.”

Pat Ash, chair of St. Paul’s building committee, said most of the project’s four phases are nearing completion, including replacement of the administrative building, refurbishing the parish hall, upgrading the courtyard and sanctuary.

“The bishop is coming in early June and we hope to show it off to him, and to do a service in the courtyard,” she said.