Cindy Voorhees brings back a message from Ukraine: ‘Don’t give up on us; we’re determined to win’ 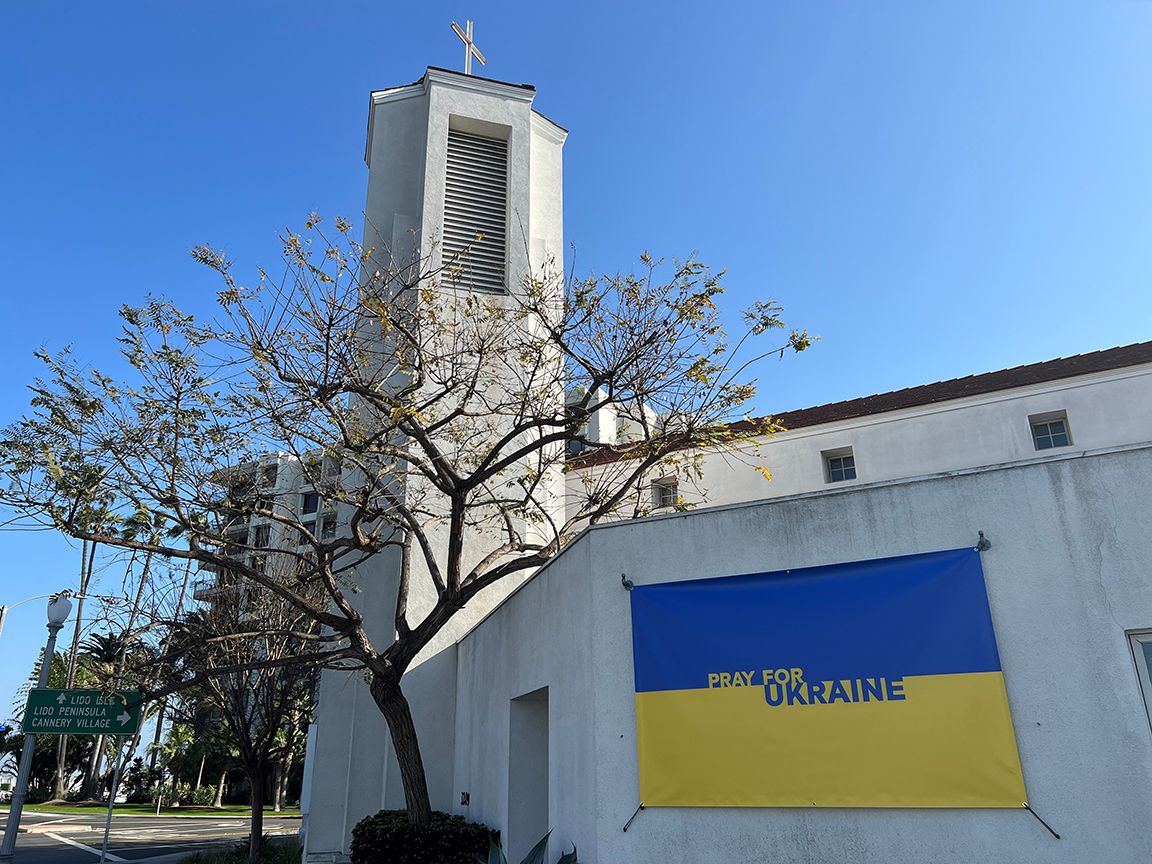 A banner on St. James’ Episcopal Church in Newport Beach sparked interest from several Ukrainian expatriates in the area, resulting in a growing relationship between the congregation and the local Ukrainian community. Photo: Cindy Voorhees

[The Episcopal News] The Rev. Canon Cindy Voorhees, who spent several weeks during the summer as a chaplain in Ukraine, has a message from the war-torn country’s people: “Please don’t give up on us, because we’re determined to win.”

And there’s more: Ukrainians “believe they will win the war against Russia to defend freedom and democracy, but they need more help and weapons,” said Voorhees, vicar of St. James Church in Newport Beach. “They want the world to understand that Russia is not just a Ukrainian problem. Russian ideology poses a global existential threat to the world.” 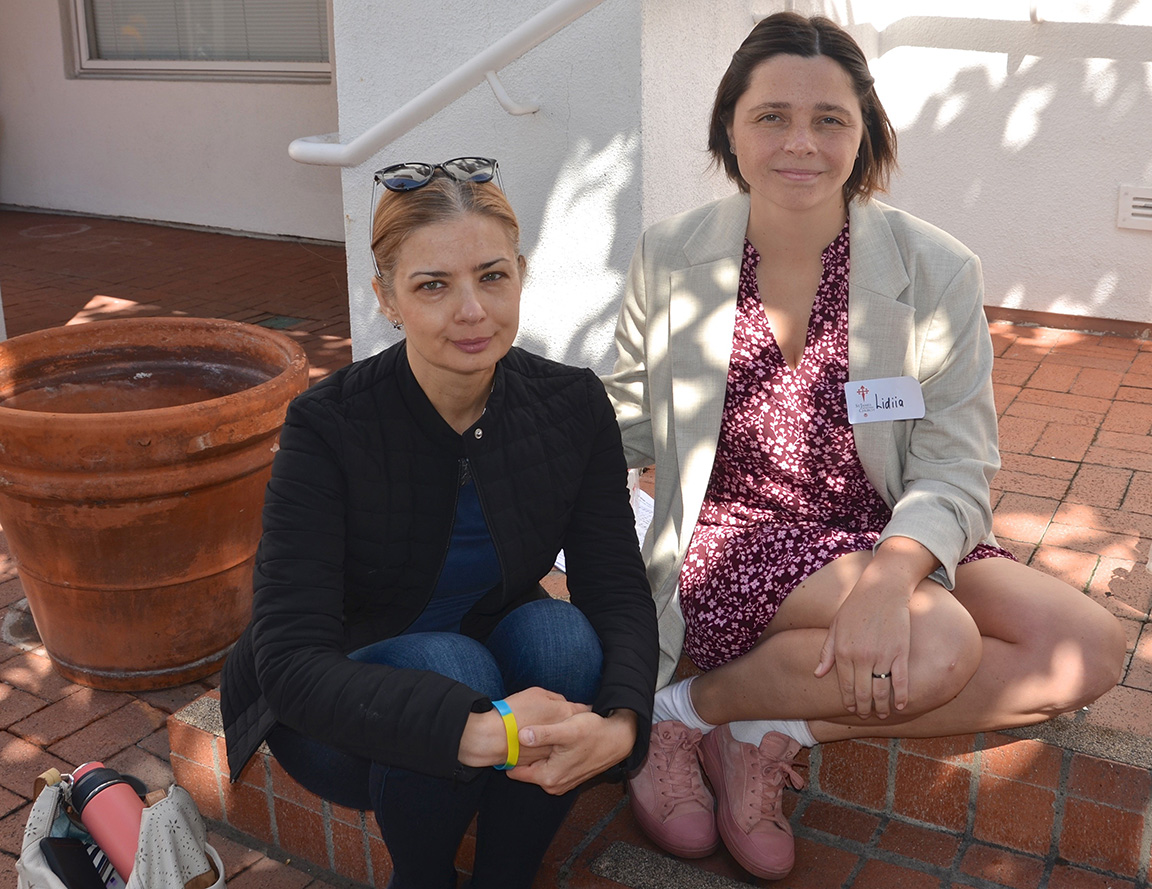 For Voorhees, the call to go to Ukraine and serve as a chaplain began with the simple hanging of a banner outside the church: “Pray for Ukraine.”

The banner, in the colors of the Ukrainian flag—blue, denoting the skies over Eastern Europe’s second largest country, and yellow, representing its massive global grain exports—drew the attention of expat Lidiia Zamaraieva, 37, a Costa Mesa resident, who is actively collecting and shipping essentials for the military, and local refugees.

“The banner resonated with me, and I thought, I have to stop by and say thank you for supporting Ukraine,” she told The Episcopal News recently. A few weeks later, she brought a cake as a thank you on a Sunday morning, Voorhees recalled, and St. James became a gathering spot for Zamaraieva and other local Ukrainians “who need community.”

One such gathering – a how-to-get-settled session for newly arrived refugees – drew about 40 people, Zamaraieva said. “The Ukrainian community has grown because of the war. People need so many things right now. We try to help those who’ve just arrived, with clothing, furniture, translation, insurance, food stamps, to give them rides to appointments,” she said.

The women’s friendship quickly evolved into a mission to travel together to witness firsthand the suffering of and to offer comfort to the Ukrainian people.

“So many things happened; I was waking up at 3 a.m., worrying about the innocent people being slaughtered in Ukraine,” Voorhees said. “There’ve been other wars, but this one really got to me. I felt compelled to put the banner up.”

That was in March; by August, Voorhees and Zamaraieva were en route to Ukraine, via Switzerland and Poland. In Poland, “we saw a strong presence of U.S. Air Force military planes and artillery on the ground. It was sobering to see this at a civilian airport, but at the same time very comforting to know that the U.S. was on the ground,” Voorhees said.

Along the way, opportunities to listen to and learn from people abounded, she said. 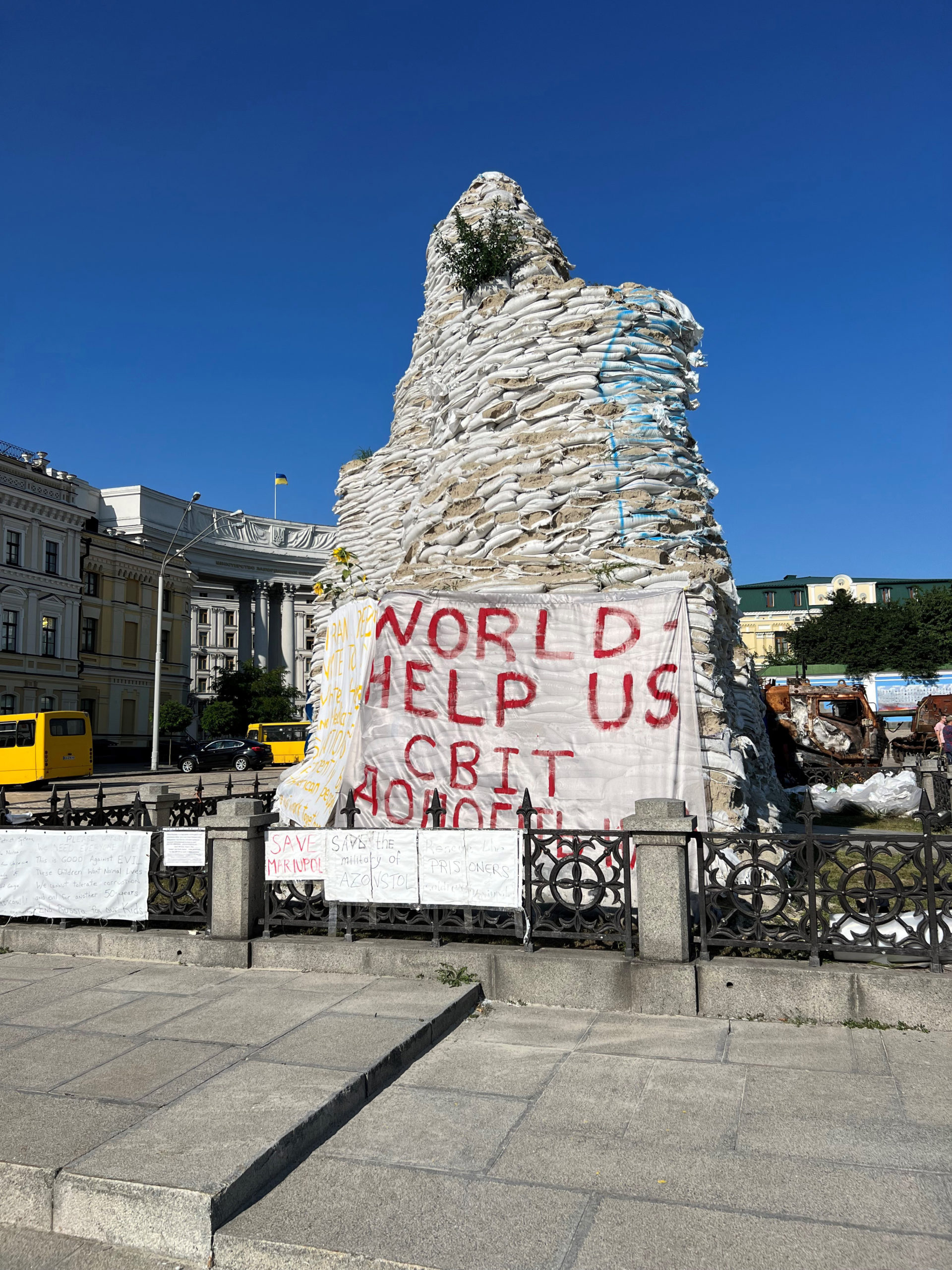 A plea for international help is draped around sandbags protecting a monument in Ukraine. Photo: Cindy Voorhees

Journey of discovery, compassion to Ukraine

During a 14-hour overnight train ride from Poland to Kyiv, the capital city with nearly 3 million population before the Russian invasion, “I spoke to a very intelligent Ukrainian woman named Nellie. (She) was returning to Kyiv to work for a German nonprofit organization dedicated to helping Ukrainians on the ground,” Voorhees recalled.

“She definitely had a handle on the political situation between Russia and Ukraine, and the rest of Europe,” Voorhees said. “She also wanted to be heard. Several of her points were that Russian would not dare provoke the United States – they really do know better.”

And that “the sanctions are working, but the Russians do not want to admit it. She was sure Ukraine would win the war simply because it is their mindset, and they are not in the least bit psychologically feeling defeated.”

Additionally, Ukraine “must win the war, (because) democracy is at stake.” Nellie and many others Voorhees encountered felt “that America doesn’t understand the threat to democracy” posed by the Russian invasion. There was also definite worry about the winter coming and the need for heat and food, Voorhees said.

With Zamaraieva acting as interpreter, the pair visited churches including St. Michael the Archangel, where “destroyed Russian military equipment” was parked nearby. They met with journalists, officials from the Ukrainian Orthodox and Catholic churches, members of Parliament, local residents, a military psychologist, and Alex Luna, an opera singer who also works for a member of Parliament.

Each encounter led to another, and the visit included stops at a local restaurant-turned-soup kitchen for refugees feeding about 120 people per day, Voorhees said. There was a waiting list of about another 120, people arriving from the Mariupol region, which Russia overran in April and where reports of Russian torture of noncombatants have surfaced.

According to ABC News, Mariupol’s mayor has said 10,000 people disappeared in the months-long siege of the city, and Ukraine’s government says it has documented nearly 34,000 Russian war crimes since the war began in February. The International Criminal Court and 14 European Union member nations also have launched investigations. 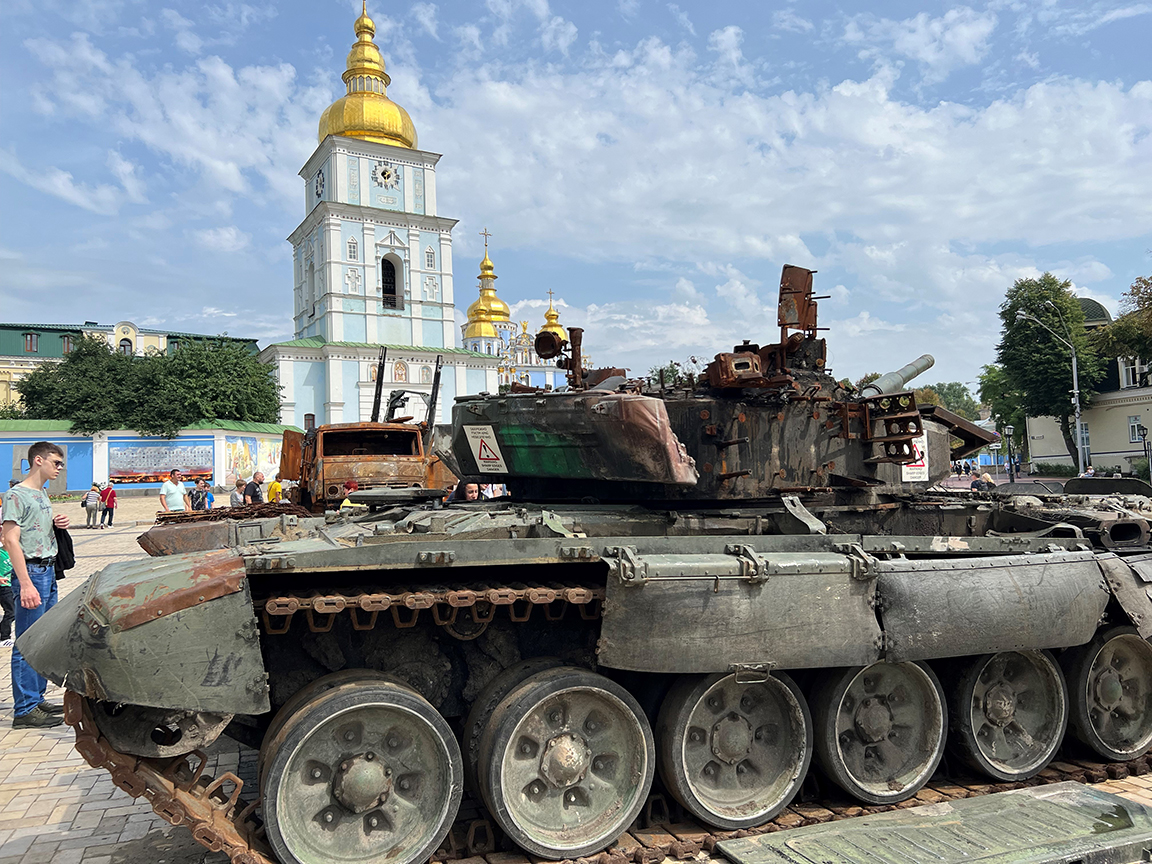 In Bucha and Irpin, neighboring cities about 15.5 miles west of Kyiv, it “was an incredibly sobering experience to see dozens and dozens of buildings just completely sheared off, demolished, and destroyed,” Voorhees said. “Imagine seeing Russian tanks come down Newport Blvd. randomly firing artillery at any building they wanted and aiming straight for Hoag Hospital. This was their reality.”

And yet she noticed a “local woman planting her winter garden in her bombed-out house and backyard,” Voorhees added. “We both got chills thinking about her and the challenges ahead for the entire community as the freezing cold winter was approaching. What will happen to her and these people? How will they survive?”

An Aug. 30, 2022 article in the Daily Pilot titled  “Newport Beach resident told herself to ‘just go’ to Ukraine” provides more details of Voorhees’ visit to Ukraine.

For Zamaraieva, the return home for the first time in three years was both bittersweet and devastating. On the one hand, “I was impossibly happy to be at home, to walk my streets, breathe my air, see my people, eat my food, speak my language,” she said.

But “your heart hurts that your people are going through this,” she added. “My family is in occupied territory … (it felt) very devastating to be at home and be unable to go to see them or to call them.”

Although the war has inflicted incredible trauma psychologically on Ukrainians, both at home and elsewhere, they remain convicted that they will win. Their message to the world is to stay the course with them; don’t forgo freedom for convenience, Zamaraieva said.

“The Ukrainian people are asking Western society to be strong and to accept the fact that maybe you have to suffer a bit through the cold winter and be more uncomfortable than before, and to pay a greater price for gas.”

Continuing the sanctions is essential because “Ukrainians are defending the rest of the world. If [Russian President Vladimir] Putin overtakes Ukraine, he’s not going to stop. It will only assure that what is happening to Ukraine is going to happen in your country. Be strong, and don’t trade gas prices and the inconvenience of a cold winter for freedom, because Ukraine won’t give up.”

Zamaraieva is collecting tourniquets, blankets, handwarmers, water filters and purifiers for both the military and civilians in Ukraine, she said. “These are small things but they’re helping people, and they don’t cost a lot, but they are crucial,” she said. 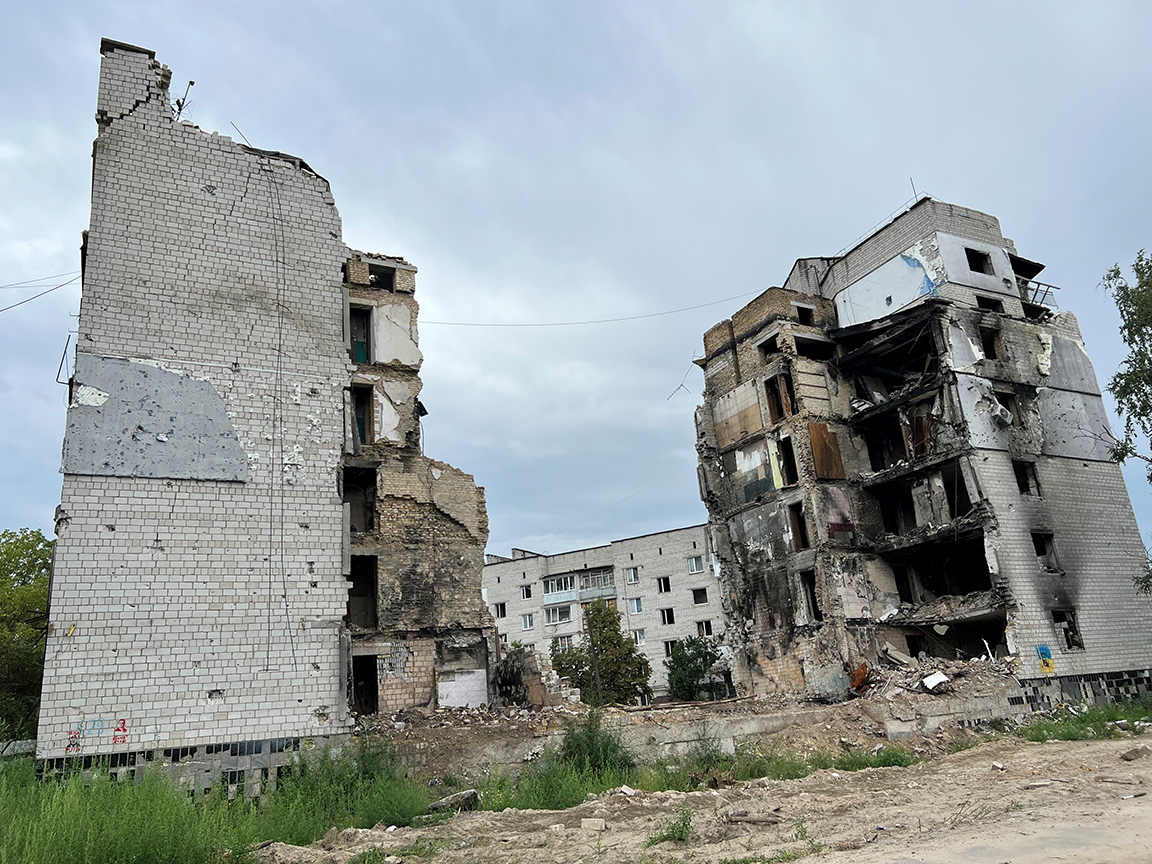 Bucha, a town near Kyiv with a population of about 35,000, was destroyed near the beginning of the war. News reports say that civilians may have been targeted by the Russian army. Ukrainian forces have retaken the city, which lies in ruins. Photo: Cindy Voorhees

Vicky Shemer, 46, who has lived in Orange County for 15 years, has been collecting infant formula and other necessities for Ukrainians at the U.S.-Mexico border, “for those starting their lives from zero. They need everything, living necessities, from clothes to kitchen equipment to strollers,” she said.

She stores donated items in her Irvine garage, and maintains a social media presence, advocating not only for household items but also for jobs for refugees.

“It’s been really tough; especially for families who’ve been through the bombardments in Mariupol,” she said. “We have people with a lot of psychological damage. They just cry as they’re picking out items. I cry with them.”

Tearfully, she adds that resources are needed more than ever for the newly arrived. “Christmas is coming up – will those families be able to afford gifts for their children?”

She would like Americans “to understand that there is a genocide going on in Ukraine right now. I understand being upset about gas prices and inflation, but there are children and adults being tortured and dying daily.”

Shemer said her curiosity was aroused when she learned about the St. James’s banner, and she felt compelled to see it. So, she attended a Sunday service.

“They played a Ukrainian anthem toward the end of the service. I broke down and cried,” she recalled. “I realized that St. James is a nonjudgmental community, where nobody cares what you wear. It’s an easygoing, home feeling. Even though I’m Greek Orthodox, what mattered was how it feels there – like a real connection.”

She added: “After the war, many Ukrainians say they’re done with God. Especially after what happened in Mariupol, my faith has been challenged like never before. But St. James is helping with that.”

Voorhees says being church at a time when mainline denominations are experiencing decline involves offering “a safe place to have community. That is church.” 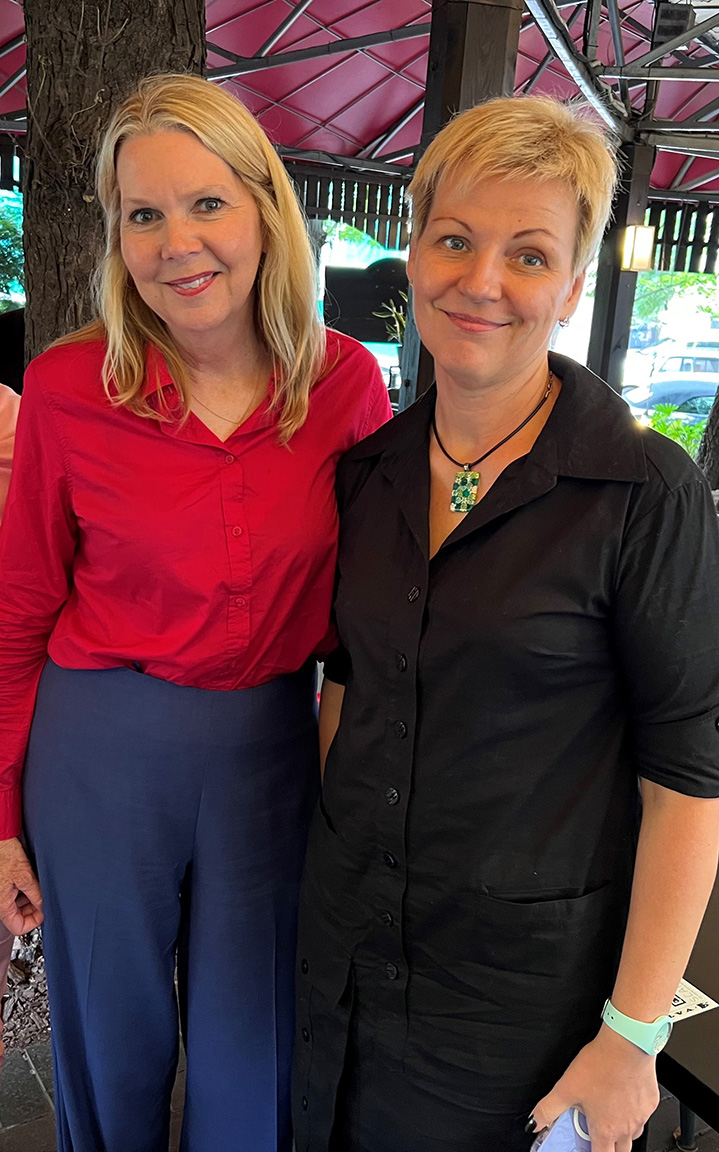 Canon Cindy Voorhees met with Tetiana Tsyba, a member of Ukraine’s Parliament, during her visit to the country this summer. Photo courtesy of Cindy Voorhees.

“Our liturgy is a wonderful part of our DNA, but you have to get people in the door first,” she said. “We have to be innovative.”

As an architect and church designer for 25 years, Voorhees’ first question to any church was always “What are the needs of your community?”

“I always encourage everyone to talk to your government officials, the police and fire department, the superintendent of schools, the mayor, the local hospital, and ask ‘what are the needs?’ You’ll find a common theme – I guarantee it.”

She advised churches to build with that in mind. “It’s knowing your audience. The problem is, of course, it’s not usually profitable to be hospitable, it’s a process. We have to take the long view, and to plant the seeds, and have faith that what you do will eventually come through.”

Additionally, says Voorhees, Ukraine “is going to be a country in great need of support not just financially, but emotionally. My call to go as a female chaplain to women and children was just part of the call. I believe I was able to minister to a variety of people who I met along the way. This was a drop in the bucket to what Ukrainians will need now and in the future.”

Volunteer organizations in Ukraine that offer a tax-deductible receipt for donations are: