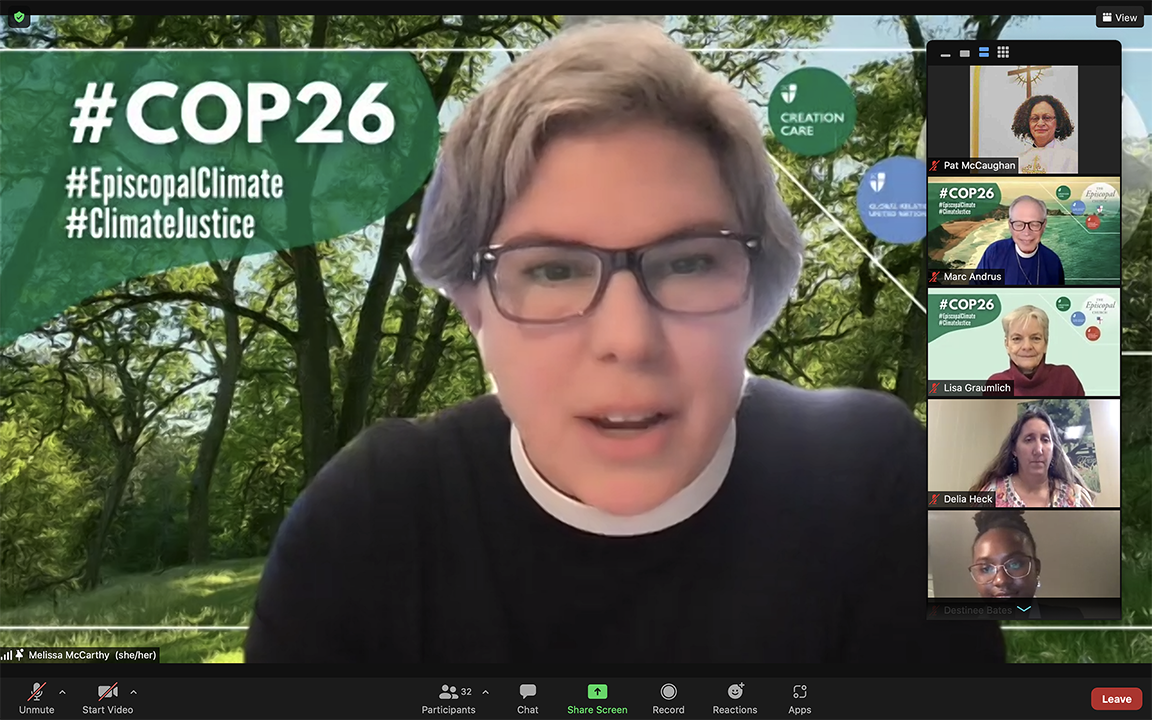 “Hearing remarks from leaders of nations is amazing. We especially appreciated Prime Minister Mia Mottley from Barbados,” said McCarthy, who rose each morning at 2 a.m. (9 a.m. Glasgow time) to prepare for the sessions, and who is slated to lead a newly created diocesan task force on climate change.

The contrast was striking when celebrated British broadcaster Sir David Attenborough addressed the gathering with a hopeful message. Mottley’s response was: “You think there’s hope, but let me tell you what’s really happening,” McCarthy recalled.

“There is this tension between hope and reality, and as Greta Thunberg said, ‘blah, blah, blah,’” she said. “There’s a lot of talk of people saying, ‘yeah we need to do this. We have science, we have technology, we have everything we need to keep the planet from warming past 1.5 degrees Celsius, but we lack the will to make it happen. Largely, I believe, it is incumbent on bigger and wealthier nations like the United States to make it happen.”

The first COP (Conference of the Parties) gathering was held in Berlin, Germany in 1995, according to Wikipedia. The meetings are held yearly, to assess progress in dealing with climate change and, beginning in the mid-1990s, to negotiate the Kyoto Protocol to establish legally binding obligations for developed countries to reduce their greenhouse gas emissions. From 2011 to 2015 the meetings were used to negotiate the Paris Agreement as part of the Durban platform, which created a general path towards climate action. COP27 is planned for 2022 in Egypt.

Loss and Damage, the workstream McCarthy and other delegates focused on, was organized under the general conference topic of “resilience and adaptation.” There are two types of loss and damage: extreme weather events, like floods and hurricanes, which happen very quickly and cause terrible damage; and slow-onset events like rising sea levels, desertification, or droughts that happen slowly over time, McCarthy said.

“Those are the two ways this area between the tropics of Cancer and Capricorn are being most affected by climate change, and Loss and Damage is trying to figure out how to help that,” she said. The tropics include the Equator and parts of North America, South America, Africa, Asia, and Australia. The tropics account for 36 percent of the Earth’s landmass and are home to about a third of the world’s people. 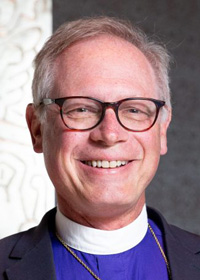 The Rt. Rev. Marc Andrus, bishop of the Diocese of California, chaired The Episcopal Church delegation’s workstream on Loss and Damage, of which McCarthy was a member.

“Back in 2015, when we ventured into the COP work in Paris, was the first time I heard the term ‘loss and damage’ and I had no context for it at that time,” he said during a Nov. 11 online meeting of delegates facilitated by McCarthy.

“But I met an Anglican archdeacon. He lived on an atoll, a small island in the archipelago of the Marshall Islands. There had been two villages on the island, and one had already been lost to rising water, sea levels. That was shocking to me, but then he went on to say what that meant. Lives were not lost, but the cultural life, the context was lost.”

Because of the rising waters, people moved to other places and the fabric of the community was lost, Andrus recalled. “Then he went further and said, the Anglican church was still standing above water. But what had been covered was the cemetery where everyone’s beloved ancestors were buried. So no one could visit and pray at the graves of their mothers and their fathers and their grandparents and their ancestors.”

The enormity of what loss and damages means began to sink in, he said. Loss and damage “is now visited many places in The Episcopal Church, the Caribbean Islands, coastal areas in Central and South America, Louisiana and Alaska. All these places are experiencing already loss and damage, having to move away from where their families, their people, have lived for hundreds of years.”

He added: “This team, of the Presiding Bishop’s delegation, is going to present compellingly important material on what loss and damage means and why. This COP26 … going on so far away in Glasgow is so important for so many people on the earth and for us, too, because we are interconnected.”

Los Angeles Bishop Diocesan John Harvey Taylor, during the session facilitated by McCarthy, asked about “opportunities to build relationships and then create opportunities for joint advocacy between those experiencing loss and damage in the developing world and victims in the developed world of climate change.”

McCarthy and others said the church’s tradition of storytelling uniquely qualifies Episcopalians to engage this work.

“The Episcopal Church is uniquely poised to do this,” McCarthy said. “We have so many churches in so many countries and we also have a relationship to government sectors and private business in a pretty unique way. We’re doing some of that already, but I’m hopeful that the Episcopal Church can really do more in the future.”

Destinee Bates, a delegation member from St. Ambrose Church in Raleigh, in the Diocese of North Carolina, agreed, adding that besides mainstream media coverage of well-known activists like Greta Thunberg, “We have to start lifting up the lesser-known voices, and we can do that.”

In a subsequent closing ceremony, Bates noted that it is time for “the church body to ask itself; are we willing to be complicit in the continued destruction of God’s creation? The answer is no.”

Barbadian Prime Minister Mottley offered a concrete metaphor for this destruction: “The way things are currently set up, it’s as if you’re driving down the street minding your own business and out of nowhere someone comes and hits the side of your car,” McCarthy recalled. “They’re at fault, but you’re the one who has to pay for all the repairs.”

She added: “Wealthy nations, largely in the northern hemisphere, are responsible for over half of the emissions that lead to the degradation of our planet and climate, while most of these small countries are on the negative side of carbon emissions. They’re not the ones causing climate change, but they are the ones most affected by it, and are least able to recover.

“So, the challenge is, how do we set up a system whereby these smaller, more vulnerable countries, who haven’t contributed to the problem aren’t made to pay for their own recovery?”

A chart showing the proportions of climate damage among wealthy and other nations is here.

As she anticipates starting the work of a diocesan task force, McCarthy said she wants Angelenos to realize the disparities between those who were at the table and those whose voices went unheard at the conference.

“I am grateful for the over 100,000 people [who were] protesting in Glasgow,” she said. “That’s really important, that way all these world leaders are held accountable. And, at the same time, that’s not the whole story. There is a lot going on that is really quite amazing and positive.”

For example, “I am not a finance person, but it became clear to me that there has got to be a shift in climate finance,” she said; “where people invest and what ends up being the best place to invest financially. I don’t think we’re there yet, but it’s inevitable that we will be, at some point.”

She hopes Southland Episcopalians will educate themselves on the dangers of exceeding the 1.5-degree Celsius global warming mark because, “once we go over it, we’re looking at extinction down the road.”

She added: “I want people to hear that global warming and climate change are real, and they’re big and to pay attention to the ways the church can participate and make a difference.”

And, to take politics out of the equation: ““Loss and damage is to climate change what reparations is to racial justice. It needs to be understood as a humanitarian issue because people will be dying. People will be moving. We’ll be seeing more climate-related migration.”