Commission on Ministry: Discerning God’s call, going where it leads 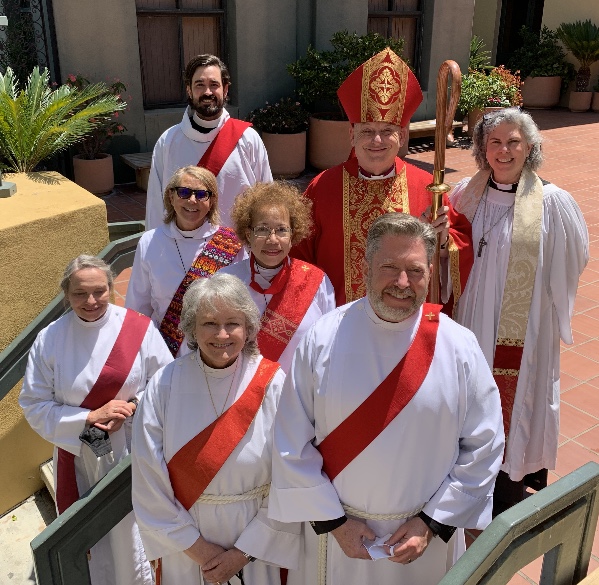 Every new clergyperson in the Diocese of Los Angeles, including these deacons ordained in June 2020, is helped along the way by the Commission on Ministry. Some explorations of ministry lead to ordination; others to lay leadership in the church. Photo: Thomas Quijada-Discavage

Before Bishop Diocesan John Harvey Taylor was a bishop, or a priest, or a transitional deacon, before he ever attended seminary at Bloy House, while he was still exploring a sense of God’s call to ordained life, Canon Jim White of the diocesan Commission on Ministry (COM) served as his shepherd.

“Now, we call them companions. Everybody who is in the process gets assigned what we used to call a shepherd, to be a liaison between them and the commission,” said White, who was elected to the COM in 1998 and serves as a co-chair.

The role also involves spiritual support, joining the person’s journey and “it is amazing to watch them grow into their ministries,” he added. “That is very powerful.”

The COM works in tandem with the bishops, diocesan staff and other committees to support potential leaders — both lay and ordained — at pivotal vocational moments. Currently, there are about 33 lay people, deacons and priests who were either elected by diocesan convention or appointed by a bishop to the COM.

“I sometimes joke to my colleagues on the Commission on Ministry that the 21st century church will be fine as long as we identify, form, and deploy exactly the lay and ordained leaders the Holy Spirit wants and needs every time,” said Taylor.

“Of course, no process is perfect,” he added. “but something sacred happens every time COM members and their colleagues on the Standing Committee and diocesan staff gather. Almost everyone is a volunteer, giving up half a weekend, praying and discerning, digging deep, wanting what’s best for the candidate and the church. Sometimes it’s hard, for the candidates and the commission. But this rich, intense collaboration always feels holy.”

Ultimately, the decision whether or not to ordain belongs to the bishop, said Sister Patricia Sarah Terry, who was first appointed to the COM by former Bishop Diocesan Jon Bruno. “Each person who comes before the COM is looked at as a unique and gifted individual who clearly is hearing God,” added Terry, who is a member of the monastic Anamchara Fellowship and attends St. Cross Church, Hermosa Beach.

“We (the COM) are just human beings, trying to help them along. For this time in their life we are, I hope, helping them to find their place.”

Mary Chalon, a parishioner at St. James Church in South Pasadena, said the COM doesn’t expect that people “have all of this together. When they come before the COM, it is more a sensing where their center is, where their faith lives in them and how it’s expressed in their lives.”

A process of discernment

The COM’s involvement begins almost as soon as someone in a local congregation begins wondering what God is calling them to. It usually happens with their local priest. A next step is to form a lay discernment committee — a group of dedicated members of the congregation to meet and pray with the person for a period of time and to help them discover God’s call for their life.

That is where White gets involved with local congregations. “I go to help the lay discernment committee get started with their work, since that is one of the first steps in the discernment process for people hearing a call to ordained ministry,” said White. “That’s the part of my work I really enjoy the most.

“I’ve been to more than 40 congregations in the diocese and I love it. I usually arrange to go on a Sunday morning, so I get a chance to worship with the congregation,” he added. “I love seeing the diversity of worship styles and liturgies and people in those congregations. The whole business of identifying and lifting up new leaders is one of our responsibilities as baptized Christians, as members of the church.

“It is something we are all supposed to be looking at all the time and helping identify new leaders.”

As the process unfolds, there are a series of meetings, with the bishop, with members of the COM, the Standing Committee and the diocesan Department of Formation and Transition. Some meetings occur over weekend interviews. Together, the diocesan bishop, staff, committees and clergy hopefuls listen to help determine if the person is called to ordination.

“The COM really tries to walk alongside that person to understand what their reasons were for being called to a particular ministry, to help that person look within, to look at what they feel this ministry is, and how much do they really know about it and to help them ask the deeper questions that maybe they haven’t asked themselves,” she said.

And that’s what makes COM service feel sacred, both an honor and humbling, say Terry and other COM members. At its heart, it is servant ministry — and it offers a broader glimpse of the diocese and its diversity as a whole.

“We always want to respect the sacredness of every person’s journey, no matter what decision may be made by the COM or what the person decides to do with the gifts offered,” she said.

“We are really being called to participate, not just in church but in the larger world. And ministry is not limited to the diaconate or the priesthood.”

There have been some recent changes to the process, including the return of a diocesan discernment year and renewed focus on discernment for lay chaplaincy and spiritual directors, a proposed initiative that would involve Bloy House, according to White.

Through the diocesan discernment year an aspirant (a person aspiring to be ordained) would “do ministry in a place where everybody hasn’t known them for years, and to spend time with a mentoring clergy person, to get more of a sense of what ordained ministry is all about,” White said.

“So many people think it’s standing up on Sunday morning behind a table and presiding at the Eucharist. That’s only like half an hour of what goes on in the priest’s life for a week.”

Several official transitions occur along the way; first, from being an aspirant to becoming a postulant, or being placed on the ordination track. Typically, this would involve entering seminary and eventually progressing to candidacy, being a candidate for ordination.

There have been some recent changes in the process, including the return of a diocesan discernment year, formerly known as a ministry study year, according to Chalon,

“There’s an aspect of the call, that feels like you can’t do anything else,” said Chalon, who was elected to a three-year COM term and then appointed by Taylor for another term.

“As an actress, I feel like I get that and recognize it when it’s there,” said Chalon, who leads a children’s ministry at St. James. She has starred in the television series Twin Peaks and is cofounder of Parson’s Nose Theater in Pasadena.

“However, being a clergyperson requires so much strength and skill in terms of understanding and handling people and managing stresses, which are considerable even in good circumstances. It is so important that clergy are healthy and grounded and rooted in their faith because they are needed so much.”

Just hearing the stories of the aspirants means “I am humbled by their strength and self-sacrifice and the difficulties that many of our people have gone through, who have come through seeking to explore their call, to see their gifts, strengths, struggles,” said Chalon.

She added that: “It is a thoughtful and contemplative process. It has made me aware that faith can be expressed in so many different ways and God touches people in a vast variety of ways. ”  For Patti Jo McKay Ramsey, judge of diocesan elections, serving on the COM “is probably one of the most difficult but most fulfilling things I do.”

It can feel difficult because it directly impacts others’ lives.

“It is not something you take lightly,” said Ramsey, a L.A. Superior Court Judge and parishioner at Christ the Good Shepherd Church in Los Angeles. “It is a prayerful commitment. Once you read a person’s file you, in essence, have that person in your mind and in your heart.”

The renewed focus on discernment for the laity is exciting and long-awaited, White said.

“Most of us lay people call what we do volunteering for the church, or we’re working on Project X, or whatever it is. There are so many people who are involved in the life of most congregations, yet the priest is the only person we see as the employee or who has a career in the church.

“Yet a lot of people — so many — love the church and want to spend more time there to have a career,” he said. “That model of ordained leadership is really the one most of us see from Sunday to Sunday in the church. There is so much more lay people can do without being ordained, and we’re trying to help people discover that.”