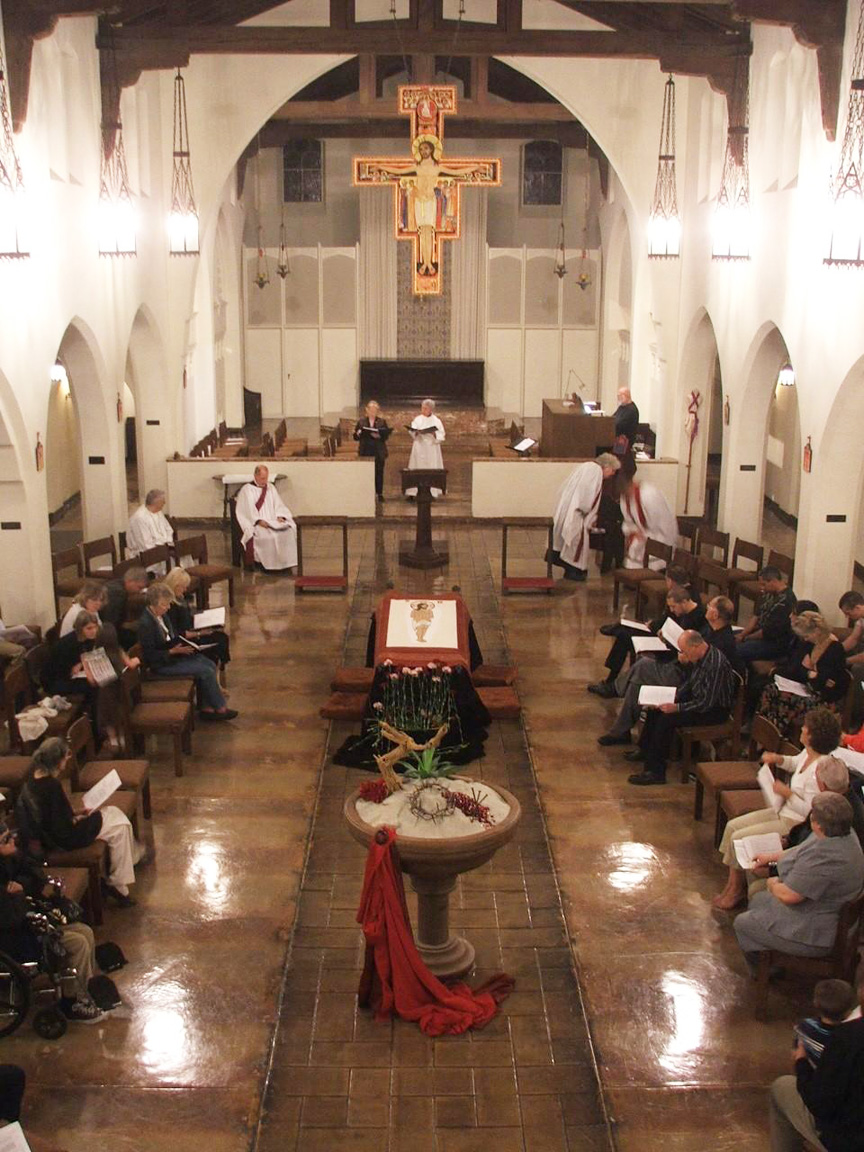 Members of all four congregations – encouraged to attend each of the services – will worship in their home churches on Palm Sunday and Easter Day, according to the Rev. Jessie Smith, St. Ambrose’s rector.

“St. Ambrose had first dibs on Maundy Thursday,” Smith said, laughing. “If food is involved, St. Ambrose is most invested. Christ Church is all about liturgy, so they volunteered for the Easter Vigil. We’re like, let’s talk about the food. We knew this was our service to do.”

The evening will be centered around a shared agape meal for at least 75, with the ability to accommodate more participants, she said. “We’ll have a creative way of doing Eucharist around the table that will keep everybody safe and abide by diocesan guidelines. We’ll then do a foot washing ceremony in the sanctuary and a stripping of the altar.”

While the joy of collective worship after separations spawned by the pandemic has blossomed, sharing resources is a congregational necessity because of changing lay leadership, overwhelmed clergy, and decreased attendance post-Covid, she added.

For example, Smith said: “We’ve seen a turnover; we have an altar guild that is different than the configuration we had before the pandemic. It means that even something as simple as a foot washing, which we’ve been doing for years and years, isn’t simple anymore because this group hasn’t done it before. Things have shifted, so just picking up the old routines feels like a big deal.”

To accommodate those attending who still may not feel comfortable with foot washing, for the first time she is setting up a hand-washing station also, she said. “Part of this is figuring out comfort levels, because a lot of people haven’t attended a meal all together yet.” 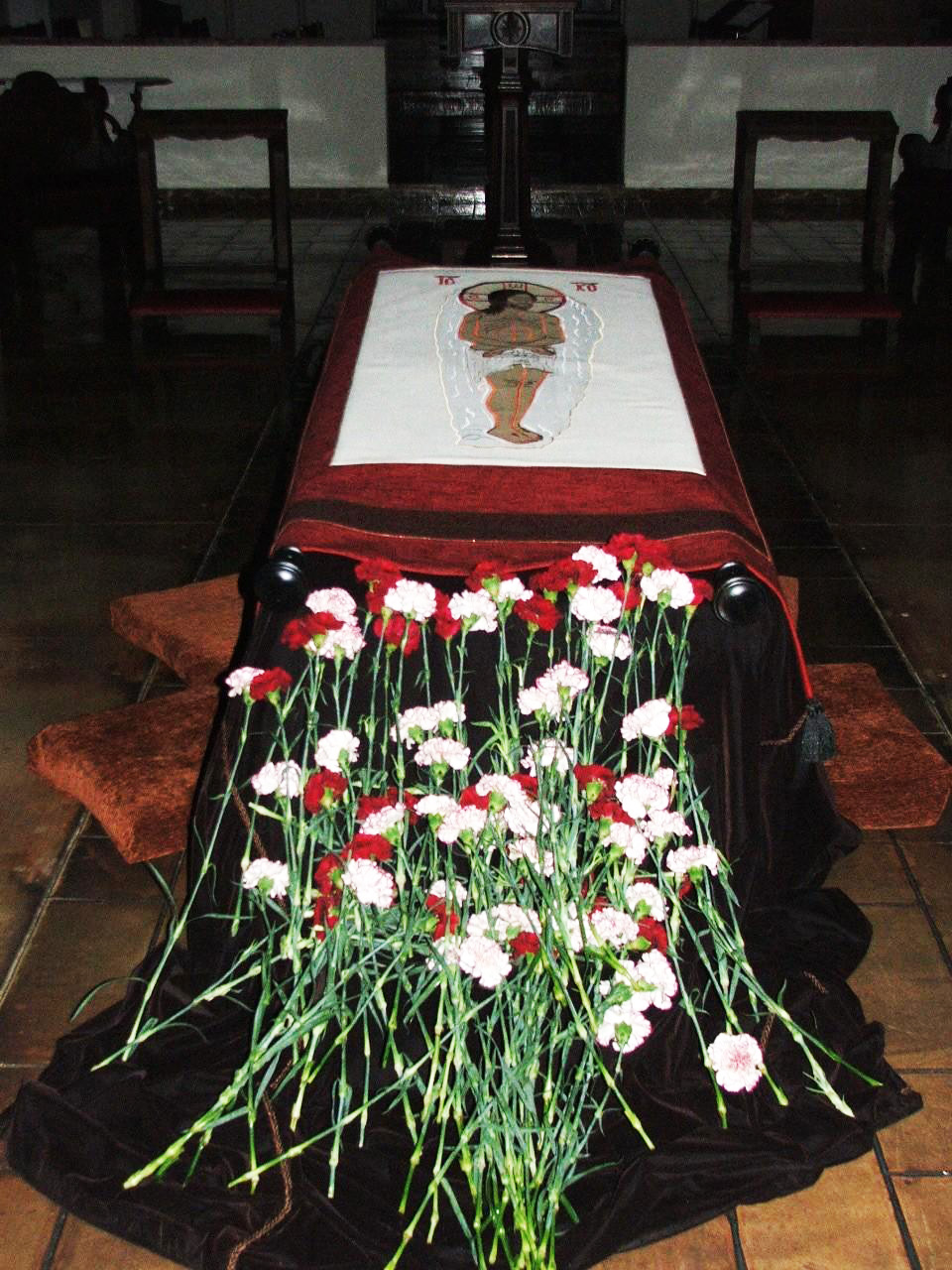 The Epitáphion, a cloth icon representing Jesus’ burial shroud, will be the center of Good Friday services at St. Paul’s Church, Pomona, on April 15. Courtesy photo

The solemn Good Friday liturgy at St. Paul’s, Pomona, will commence with the blowing of the shofar, a ram’s horn typically used in the Jewish tradition, and will include veneration of the Epitáphion, a full-sized, maroon-colored cloth icon representing the burial shroud of Jesus, typically used in the Greek Orthodox Church, according to the Rev. Canon Mark Hallahan, rector.

“It’s a very ornate icon, a rectangle cloth icon about the shape of a person’s body and sewn on it is the image of the dead body of Jesus. It’s meant to be similar to the shroud which Jesus was laid upon and wrapped in. We carry it in procession, like a funeral procession, and lay it on a table that’s slanted, in the center of the church, sort of like we’re at a funeral.

“People kneel at it; they bring flowers to lay at the feet. They touch it, lay their heads upon it. It’s very moving,” Hallahan said.

The Rev. Liz Kronenberg, vicar of St. John’s, La Verne, hopes to incorporate that icon into her congregation’s Tenebrae services, surrounding it with the candles that are gradually extinguished.

Tenebrae echoes ancient monastic night and early morning services and includes chanting the Lamentations, each verse introduced by a letter of the Hebrew alphabet. It incorporates the gradual extinguishing of candles until only one light, symbolizing Christ, remains. Toward the end of the service the Christ candle is hidden, typifying the apparent victory of the forces of evil.

At the very end of the service, a loud noise is made, symbolizing the earthquake at the time of the resurrection (Matthew 28:2), the hidden candle is restored its place, and everyone departs in silence by its light. 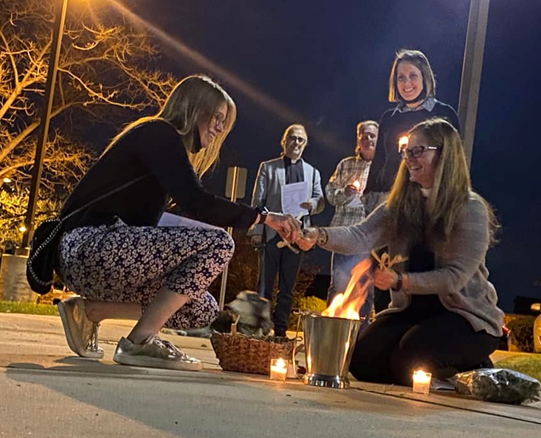 Members and clergy of St. John’s, La Verne, burn palm crosses on Shrove Tuesday. On April 13, Wednesday of Holy Week, the congregation will host the Deanery 6 service of Tenebrae.

“I love that service because of the deep reflective nature of it, and the meditative nature of it,” said Kronenberg. “I hired a cellist to come and play longer pieces of music as a way for participants to have an extended time for musical meditation on the readings that have preceded it. I really wanted a cello because it is an instrument that kind of weeps. It seemed the appropriate musical tone to set for the nature of the service.”

The deanery collaboration is exciting because, she said: “It’s like bringing in the voices of our sister churches in our area has enriched the conversation and led to us moving forward in an inter-parochial collaboration. It’s a positive direction for all of us in the future.”

The Rev. Gianluigi Gugliermetto, rector of Christ Church, Ontario agreed. While he considers the Holy Week services an experiment, such collaborations are “of utmost importance (for) small churches in the same area to learn how to collaborate and share resources,” he said.

“On January 6, three churches came together to celebrate the Epiphany,” he recalled. “The experience was joyous and exciting. Comments were unanimous: ‘I like to meet other Episcopalians in the same area,’ or ‘I am elated that there are other people who live the way we do, as our social context here is not always so welcoming to progressive Christian ideas.’”

Christ Church was one of the first congregations in the diocese to experiment with an Easter Vigil in the 1960s, and he is happy to continue the tradition, he said. He will invite clergy and laity from participating congregations to share the Holy Saturday vigil readings.

The Very Rev. Keith Yamamoto, Deanery 6 dean and rector of St. Mark’s Church, Upland, said the collaboration is not only important but helpful for churches to support and to learn from one another.

“Demonstrating a rapport and mutual affection with one another is good for all our communities, as well as introducing us to different styles of worship,” Yamamoto said. “Deanery 6 is blessed with congregations that have historic and rich worship spaces and practices and this type of interaction energizes both clergy and participants.”