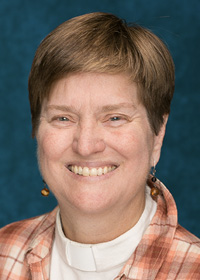 The Rev. Jeanette Repp, rector of St. Peter’s Church, San Pedro since 2010, has inspired her parishioners and others to engage in imaginative and effective projects serving their community. She now will bring that cooperative spirit and zeal for service to her new role as dean of Deanery 8, which comprises 16 congregations in the Long Beach and the South Bay area.

“Thirty years a priest, devoted to social justice, a gifted fundraiser and loving pastor, Jeanette will be a magnificent servant leader for the deanery we call the Great Eight,” said Bishop John Harvey Taylor in announcing Repp’s appointment. “Bishop [Diane M. Jardine] Bruce, Canon [Melissa] McCarthy, and I are already benefiting from her wise counsel.”

“I feel very honored,” Repp told The Episcopal News. “To have the bishop’s call was quite a surprise, and I’m very excited. It feels nice to take something like that on.”

She succeeds the Rev. Paula Vukmanic, who recently retired as dean and as rector of St. Francis’ Church, Palos Verdes Estates.

Repp says her first task will be to connect with clergy and make sure they feel that their deanery and diocese have their backs. “This COVID time has been really, really hard on clergy,” she said. “I know we all love what we do, but it’s been a lot. So my first thing is just to connect and support everybody. Then we’ll go back to regular meetings. I think for most clergy, it’s just really valuable to have other clergy to talk to.”

She also hopes in the future to bring the deanery congregations together for joint outreach projects, possibly building on existing connections, such as the local branch of  Family Promise, an organization that serves homeless and at-risk families, or Habitat for Humanity, with which several deanery congregations already have a working relationship.

Her predecessor “did a couple things that were really great,” Repp said. “We pray for each other between meetings. We also did a course of the My Work to Do program, and we may continue that.”

Repp describes the deanery as “pretty diverse, with a few solid larger churches and a few smaller missions, and those like St. Peter’s, somewhere in between.” Matters of finance and membership, she said, are among the greatest challenges facing the congregations.

A ministry of service to the neighborhood and wider community

St. Peter’s, Repp said, has “a long history of doing things in the community.” Pre-COVID, it hosted some 12 AA and other 12-step groups, and helps support the work of Beacon House, a premier addiction recovery program that was originally co-founded by the late Rev. Canon Arthur Bartlett, an assisting priest at St. Peter’s, director of the Seamen’s Church Institute and a Los Angeles Harbor commissioner. Beacon House, now an independent nonprofit, has since grown to encompass a full city block in San Pedro, housing as many as 110 residents. St. Peter’s Church offers space for continuing AA and other groups for those who have graduated from Beacon House programs.

Until the pandemic shutdown, the parish hosted an Irish dance troupe, a karate program and several other community activities. It also has a long history of successful fundraising for Episcopal Relief & Development.

Repp looks forward to re-opening when it’s safe and once again having a lively campus serving the neighborhood. “I love this church,” she says.

With clergy from three other local Christian congregations and a synagogue, Repp founded the San Pedro Faith Consortium, which helps to support Family Promise, Laundry Love and a shower ministry and offers support to other agencies. Their special focus is the every-increasing homeless population in the area.

Together, the consortium can “do these projects that separate churches couldn’t do on our own,” Repp said. “I love doing that.”

Repp is a native of Northern California, where much of her family still lives. She earned a bachelor’s degree from the University of California, then a master of divinity degree from Seabury-Western Theological Seminary. She was ordained to the priesthood in 1989 by Bishop Frank T. Griswold of the Diocese of Chicago, who later became presiding bishop of the Episcopal Church. During her time in Illinois, Repp earned a master’s degree in social work. “There was a time when I did both – parish work and a private [counseling] practice,” she said. “Then I decided to stick with churchy stuff.”

Repp enjoys several hobbies, including martial arts and birdwatching. She lives in San Pedro with her twin daughters, Zoe and Lilly, 13.