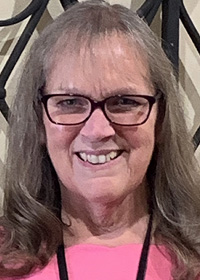 Canon to the Ordinary Melissa McCarthy, chief of diocesan staff, announced Feb. 23 that Diane Pound has joined the diocesan staff as executive assistant to the bishops.

Pound succeeds Canon Abigail (Gail) Urquidi, who after some 15 years in that role – beginning under Bishop J. Jon Bruno – is now interim administrator for the diocese’s finance office, where she serves as the main point of contact for congregations in finance matters.

Pound has been assisting on an interim basis in various diocesan roles for about year, most recently as interim assistant to the bishops. She comes to the Southland from the Diocese of Massachusetts, where was executive assistant, first to the canon to the ordinary and bishops suffragan – including Bishop Suffragan Barbara Harris, first woman bishop in the Anglican Communion – and later to the bishop diocesan, serving five different bishops during her 12-year tenure. Pound was involved in the Massachusetts diocese’s major capital campaign, which raised more than $32 million. For that project, she worked with CCS, the firm now assisting with a similar effort here in the Diocese of Los Angeles.

“The Holy Spirit sent us an amazing gift in Diane, whose experience in Massachusetts prepared her for her ministry in Los Angeles in countless ways,” said Bishop John Harvey Taylor. “She quickly became a beloved member of our St. Paul’s Commons family in exile. Her arrival was a double blessing because it enabled Canon Gail Urquidi’s promotion to interim administrator for finance, where she is bringing her administrative brilliance and deep roots in the diocese to bear in helping us better care for our constituent institutions during this wilderness time. More exciting news is to come soon about Canon Urquidi’s new ministry.”

Prior to her time at the Diocese of Massachusetts, Pound worked for more than 20 years for computer technology company Digital/Compaq/HP. She moved to California about two years ago to be near her daughter, Michelle, who was married here last February.

Pound is “a big baseball fan (Boston Red Sox and now L.A. Dodgers and Angels!),” she says, adding, “I am very excited to be here and I look forward to working with everyone.”