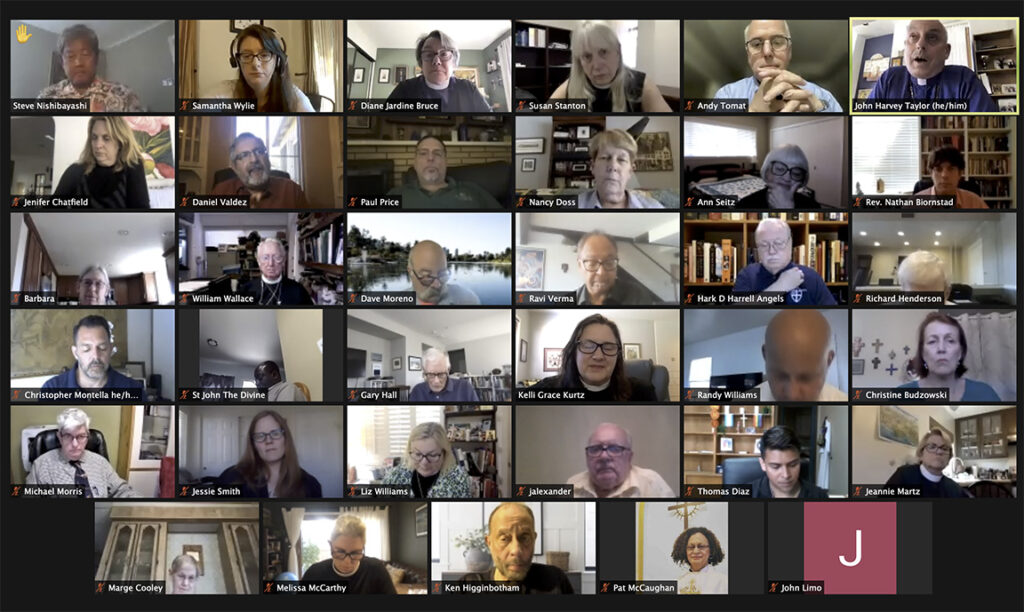 Canon Steve Nishibayashi, diocesan Secretary of Convention, was elected on the first ballot to the Joint Nominating Committee for the Election of the Presiding Bishop, and at least two other Angelenos – Thomas Diaz and the Rev. Antonio Gallardo – are still in the running during the online balloting, Diaz reported at the June 10 meeting of Diocesan Council.

(On June 15, a second online vote was held, but no additional seats were filled because no candidate received a majority of votes.)

That several Angelenos have been represented in the digital balloting – a result of the pandemic-forced postponement of General Convention 2020 – comes as no surprise, said Bishop John Harvey Taylor. “We’re just trying to see where the Spirit leads us … not that it’s easy to imagine replacing the most important voice in 21st century Christianity, namely Presiding Bishop Michael Curry, but this good work does need to be done. We already know Los Angeles is going to play a big role.” Delegates to the 2024 meeting of General Convention will elect the next presiding bishop, who will take office in November of that year as Curry completes his nine-year term.

Taylor also welcomed the new diocesan finance director, the Rev. Susan Stanton, to her first council meeting. Stanton, who pledged transparency, accountability and timeliness in reporting data, also observed “how much passion” is connected with budgeting and its relationship to mission priorities.

As of June 10th, 54 of 92 parishes have signed and returned mission share fund (MSF) pledges, overall giving is up, both in dollars and percentages, according to diocesan treasurer Canon Andy Tomat.

Tomat’s monthly report to council also reflected a $124,000 loss in other income, tied to cancellation of the annual diocesan Clergy Conference, the pandemic-related closure of the retreat center and other factors. Diocesan operational expenses are under budget, largely because of understaffing and postponed in-person program activities, he said.

The new Joint Budget Committee held its first meeting and will deliver the first draft of the 2022 budget to council in September, he added.

Bishop Suffragan Diane M. Jardine Bruce, whose diocesan responsibilities include stewardship and sustainability, reported that, anecdotally, many congregations that quickly adapted to online giving and digital worship “not only did fine, but they actually thrived during the pandemic.”

The Program Group on Stewardship and Sustainability has expanded its membership, is working collaboratively with other dioceses, and has developed a series of offerings for Spanish-language and Asian American contexts, she said.

Bruce announced a renewed emphasis on transparency, legacy gifts, and the diocesan capital campaign, as well as efforts to engage millennials and continued stewardship in the hybrid world. “The more you organize around mission and ministry areas, the more you can be transparent about how every dollar is spent, and how those dollars are making a difference in God’s kingdom, and how you’re living out God’s economy. People want to be generous to these efforts.”

She noted that each year the diocese purchases a membership in The Episcopal Network for Stewardship or TENS, which then is free to all its congregations. “We recommend that highly; you can take it and make it your own in any way that you please,” she said.

At its May 26 meeting, the Standing Committee consented to the election of the Rt. Rev. Ruth Woodliff-Stanley as fifteenth Bishop of South Carolina and approved an application for the congregation of St. Athanasius in Echo Park to revert from parish to mission status, according to the Very Rev. Canon Gary Hall, Bloy House interim dean. Diocesan Council will address the Standing Committee’s summary of the Lombard Mennonite Peace Center Report about reconciliation efforts with St. James, Newport Beach, at the July 15 meeting.

Christine Budzowski reported that the board of the diocesan Episcopal Church Women (ECW) is planning an annual meeting. There are openings for a United Thank Offering coordinator and a board secretary.

Additionally, the ECW is meeting with Archdeaon Laura Siriani regarding administration of the Bishop Chester L. Talton Deacon Education Fund, created by the ECW, to assist with continuing education for deacons. “We’re also working to find a deacon representative to the ECW board … to bring the needs of the community to the board,” she said.

Applications for mission development grants (MDGs), which assist mission congregations, are due by July 31, according to the Rev. Canon Kelli-Grace Kurtz, chair of the diocesan Program Group on Mission Congregations.

“This year, we’re also asking that narratives include letting us know how they have weathered the pandemic, how are things going. “We think it’s important that we hear from our mission congregations on how their buildings and grounds are going, seeing as how they were closed up for over a year.”

Grants are used to assure mission congregations are able to afford clergy and are capped at $60,000, she said. Additionally, Taylor and others are developing letters of understanding for the eight communities in the diocese designated as mission centers. “It’s an opportunity for clarity of communication, clarity of what’s available and what you can expect,” she added.

Planning is underway for a one-day, in-person Nov. 13 business session at the Riverside Convention Center with remote access, Secretary of Convention Nishibayashi told the council.

“These plans are contingent upon development. and public health and safety rules which we will continue to monitor,” he said. “We have scheduled the preconvention diocesan deanery presentations for October 23, 24 and 30.” Deanery meetings are organized in clusters for diocesan presentations, while deanery assemblies and business will be conducted at other times.

Convention Coordinator Samantha Wylie said the office will survey delegates to determine hotel accommodation needs. Congregations need to update delegate information via the convention website. Diocesan ministries will be invited to have in-person exhibits; all others may participate in a virtual exhibit hall, she said.

Canon to the Ordinary Melissa McCarthy reported that she continues the search for a new diocesan controller after the previously selected candidate withdrew due to family concerns. Also, McCarthy said, “I’ll be doing my yearly trek up to Camp Stevens to be a chaplain at their counselor training program, which will be super fun. I’m excited about that. And I’m excited that they are having camp this year.”

Counselors “will be learning about trauma informed care, recognizing that everybody at camp has been through a collective trauma called the coronavirus pandemic,” she said. “They’ll also be doing some Diversity, Equity and Inclusion (DEI) work, which is really exciting. We’re going to be changing out some of our modules to a restorative justice module, and then also working on different kinds of cognitive processes; so, how to work with campers who process the world differently.”

Discernment about diocesan bodies, returning to in-person activities as well as continuing hybrid ones will happen over the summer, Taylor said. “I think we’ve shown that in a digital setting, we get a lot of good work done. And there’s something kind of equalizing about this. This way of being together, attendance has been extraordinarily high, given the fact that people can participate online. We’re going to be thinking of all the things that we can do to make it as easy as possible to continue to serve the diocese.”

Taylor referenced a June 10 online meeting to introduce clergy to the “Generation to Generation” capital campaign. “We’re raising three endowments: one for the assets and operations, one for forming the leaders the church needs in the 21st century, and one for neighbors in need.”

Deanery meetings will continue throughout the summer to introduce clergy and laity to the capital campaign, he said, “as we seek to develop parish and mission partners for this vital work of putting the whole diocese on a stronger financial and administrative footing as the Holy Spirit reveals the church that is to come and the church that the saints will inherit.”

Dan Valdez, said the Episcopal Community Federal Credit Union (ECFCU) is in the process of becoming a virtual financial institution and is expanding to include members in the dioceses of California, San Joaquin and San Diego. Planning is underway to include third-party payment services like Apple and Google Pay, “so that our churches have more opportunities to expand their stewardship and to have donations go directly into those institution’s bank accounts.”

Diocesan Council meets next at 4 p.m. online on Thursday, July 15.