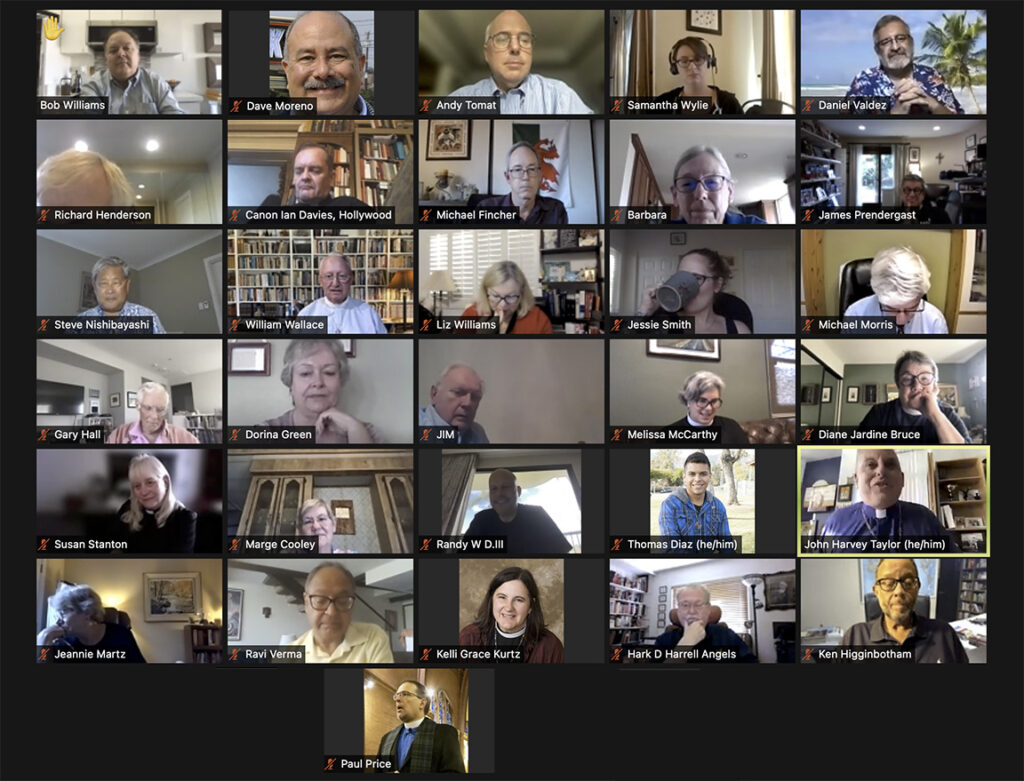 Los Angeles Bishop Suffragan Diane M. Jardine Bruce may become the next provisional bishop of the Diocese of West Missouri, but she’ll always be an Angeleno, she said at the Sept. 9 regular meeting of Diocesan Council, the last one she expects to attend.

“I’ll always be one of you,” she told council members, adding she was practicing former California Governor Arnold Schwarzenegger’s iconic line from his Terminator movies: “I’ll be back.” “And I just want to say what a privilege and honor it’s been to be your bishop suffragan.” Delegates to the West Missouri diocese’s 132nd annual meeting on Nov. 6 will be asked to approved Bruce’s nomination.

“She will be back, but it’s a momentous time for us,” said Bishop Diocesan John Harvey Taylor. “Because we are saying au revoir, first of all, to a gifted pastor. After you’ve spent time with Bishop Bruce, you’ll always feel a little bit better. Because she’s found a way to reassure, comfort and affirm. She’s a justice seeker. Bishop Bruce has a vision of a church where all are welcome.”

Taylor opened the meeting with a prayer invoking the approaching 20th anniversary of the Sept. 11, 2001 terrorist attacks: “For the heroic people who rushed to save them, for the victims’ families, and for all who were injured in spirit that day in our nation and in the world, enable us to learn the right lessons from these and all acts of savagery and darkness in the broken world which you love without reservation or exception. By our remembrance of these events and their aftermath, 20 years ago Saturday, strengthen our resolve to uphold the values of freedom and justice for all that signify our nation at its best.”

Canon Andy Tomat, diocesan treasurer, invited input and feedback after presenting a consolidated draft budget prioritizing existing ministries and mission congregations. The draft $9,885,600 budget for 2022 is a 2.6% reduction from 2021’s consolidated budget of $10,148,579. and for the first time is balanced in its entirety. The draft budget was prepared using input from all program groups and reflected $1.2 million in reductions recommended by the Joint Budget Committee, which includes diocesan council members and corporation directors.

The budget is considered historic because for the first time a unified diocesan budget is being presented to all governing bodies for review; though by canon each body will approve its share separately: Convention approves the Mission Share Fund (about 44% of the total); the bishop the Corporation Sole restricted fund grants (6%); corporation directors the COTD operating budget (24%); and independently funded program groups like IRIS and Seeds of Hope that control their own budgets (totaling 26%).

The budget no longer drains Corporation of the Diocese or Corp Sole savings. Also, for the first time it includes “the mandated 3.5 – 4% draw (estimated to be $160,000) from $3 million in new diocesan endowment funds raised through the capital campaign so far” Tomat said. “It also includes draws from two older restricted endowments.”

Corp Sole income comes from a restricted endowment for the poor and needy that is used to support mission congregations serving disadvantaged communities, Tomat said. It also includes income from rental properties and an annual bequest from a trust. The only assets remaining in Corp Sole include two restricted funds, sacred and non-sacred real estate, and income from a number of bequests, some of which goes to other institutions such as Hillsides. Eventually, following legal and financial review, those funds will be transferred out of Corp Sole and into new endowment funds.

Typically, mission congregations receive development grants totaling about $1 million to fund ministry. The Rev. Canon Kelli Grace Kurtz reported to council that the Program Group on Mission Congregations met Sept. 8 to consider requests for the 2022 program year from 27 of the diocese’s 37 mission congregations. The grant requests range from $15,000 to $99,998, and average about $35,510, totaling about $1 million, she said.

The proposed budget does not provide funding for staffing new ministries or filling existing diocesan staff vacancies. Following Bishop Bruce’s departure funds have been allocated to allow for supply bishops and clergy to assist with official visitations with the goal of visiting each congregation every two to two-and-a-half years. Across-the-board cost of living increases also could not be included in the budget this year but salary adjustments were incorporated for some positions to get them closer to market norms.

Additionally, the diocesan benefits program “represents a significant unfunded liability” and is under review, Tomat said. Budget committee members hope to reform it “with as little impact to employees’ health and well-being as possible. We remain committed to the church’s goal of providing basic healthcare and benefits parity. The long-term goal is to provide market-level pay and benefits to all employees.”

Bishop Taylor named the Joint Budget Committee earlier this year, comprising members of Diocesan Council and the Corporation of the Diocese, to be convened by Tomat. He thanked the committee, Tomat, and the Rev. Susan Stanton, director of finance, for their course-changing work. He said that for the first time in recent memory, the diocese aims make history by adopting a balanced budget without burning capital from Corp Sole or the Corporation.

Canon to the Ordinary Melissa McCarthy, responding to a suggestion, told council members that while the retreat center at St. Paul’s Commons has been closed during the pandemic, it has been investigated as a potential site to house the homeless but the agencies making the inquiries “were looking for more beds than we could offer.”

The Very Rev. Canon Gary Hall, Standing Committee representative to council, reported that John Gilbert Draper, Kathleen Marie Moore and Daniel Tamm had been approved for ordination to the diaconate; the service will be held at 10 a.m. on Saturday, Sept. 25 at St. John’s Cathedral.

Kurtz reported that the PGMC also voted unanimously to support the application of St. James’ Church, Newport Beach, to move from mission to parish status, she said. The program group “recommends that Bishop Taylor approve their request and forward their application to the Standing Committee. In the best interest of all parties concerned, the program group recommends the vote not be put in front of convention until 2023.”

Thomas Diaz, council liaison for the diocese’s General Convention deputation, said deputies met July 17 virtually with the Rev. Gay Jennings, president of the House of Deputies, and learned of new opportunities for deputies of color to prepare for the 80th General Convention of The Episcopal Church, to be held July 7 – 14, 2022 in Baltimore.

Diaz will be attending a Sept. 25 daylong seminar, “Telling the Truth,” planned to inspire a sense of hope “and unity of purpose and encourage our work together in preparation for General Convention 2022.”

Canon Steve Nishibayashi, secretary of convention, said deanery deans should select youth delegates for the upcoming Nov. 13 “Truth and Love”-themed 126th annual convention of the Los Angeles diocese. The convention will be held in person at the Riverside Convention Center with remote attendance opportunities, he said.

“Voting for those who are attending in person will be by voting devices distributed at time of registration. Those who will be attending remotely will vote as we did last year through internet-connected devices,” he said. The hotel reservation system for both the Marriott Hotel and the Mission Inn are operative and lunch tickets for the Saturday buffet lunch will soon be available for purchase, he said.

Bruce said planning for the 2022 diocesan Martin Luther King holiday celebration, to be held at Christ the Good Shepherd Church in Los Angeles, is underway. “We are trying to incorporate a weekend of events including the Martin Luther King parade through part of Los Angeles,” she said. “Our keynote speaker will be Bishop Deon Johnson from the Diocese of Missouri.”

She announced that Kurtz will serve as co-chair of the Compensation Committee, which has been studying pay equity across the diocese. The committee’s work will be acknowledged in a resolution at convention.

McCarthy said that St. Paul’s Commons staff will return to pre-pandemic schedules Sept. 16; most staff will be on site Tuesdays, Wednesdays and Thursdays, with the option to work remotely on Mondays and Fridays.

Taylor reported that he and his spouse, Kathy O’Connor, would host a gathering at their home on Sept. 10 for a program featuring Pulitzer-winning author Jack Miles speaking about his recent book, God in the Qur’an. A select group of contributors to the diocesan capital campaign was invited to hear the discussion, which also featured Lutheran Bishop Brenda Bos and Muslim community leader Tasneem Noor. (An Episcopal News story about the evening’s program, with a link to a video of the full presentation, is here.)

Canon for Common Life Bob Williams, who returned Sept. 7 after a three-month sabbatical, reported he is at work on a “Horizons and Heritage” book as a follow-up to the 150th anniversary of Episcopal parish ministry in Southern California, commemorated in 2013-2014. The book will have a web component.

“The forward-looking aspect of horizons interested me in writing the book in the first place,” Williams said. “In the history of the diocese there has been innovation, progression, and problem-solving at all junctures in the life of the diocese.”

The next meeting of Diocesan Council will be held at 4 p.m., Thursday, Oct. 21.