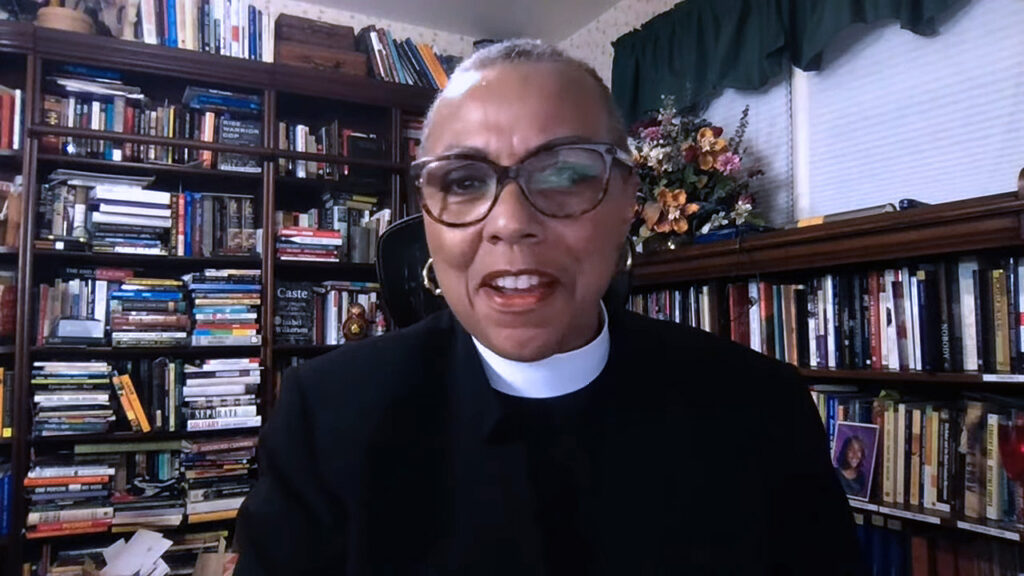 Speaking from her home in Washington, D.C., Gayle Fisher-Stewart delivers the sermon at the 2021 Martin Luther King Jr. commemoration on Jan. 16. Photo: screenshot

“I feel there is a need for a revolution of values in America, because some of the values that presently exist are certainly out of line with the values and the idealistic structure that brought our nation into being. Unfortunately, we haven’t been true to these ideals and many of the values of so-called white middle class society are values that need to be reviewed and re-evaluated and in a real sense they need to be changed.”

The theme of the two-hour multi-media tribute echoed King’s fourth and final book, Where Do We Go from Here: Chaos or Community? published shortly before his 1968 assassination. Speakers recalled King as revolutionary, as radical, as a Democratic socialist, a tireless campaigner for human rights, and activist for racial, social and economic equality.

Bishop Suffragan Diane M. Jardine-Bruce welcomed an audience of some 2,500 viewers with an acknowledgement of “the timeliness of today’s service, in a moment in all of our lives when we have witnessed the horrific violence in our capitol and our streets.

“We pray that the words, prayers, meditations and music offered give us all the strength to carry on King’s legacy, working for justice, peace and equality for all, through nonviolent means.”

Fisher-Stewart is interim rector of St. Luke’s Episcopal Church in Washington, D.C. and the founder of the Center for the Study of Faith in Justice.

Suggesting that the insurrection was caused, at least in part, by fear in the wake of the elections of the Rev. Raphael Warnock as the nation’s first Black senator from Georgia, and Kamala Harris, the first woman, and the first person of Black and Asian descent as Vice President-elect, she said: “This is what has folks in a dither. The country is coming closer to what the founding documents visualized but those who created them did not really believe.”

A former Washington, D.C. Metro police officer, she referenced the racial disparities evident in policing and underlying issues of white supremacy, boiling just below the surface of society: “Armed white people, amassing on the streets of D.C., on the steps of state capitols, taking selfies with police and governmental officials. Armed white people are merely expressing their Second Amendment rights. Armed white people are not a danger; Black and brown folks who breathe are.”

Decrying “the taming of King’s legacy, the dumbing down of his woke-ness, the neutering of his radicalness” and efforts to “make King into a likeable, acceptable, controllable Negro,” she declared King a radical. “He was radical. He was a Democratic socialist” who called for an equitable distribution of wealth. “And, it got him killed.”

Fisher-Stewart concluded: “King was a threat to white supremacy, and it got him killed. When will we celebrate the whole King and not the white-washed King? We who believe in justice are called to resurrect the true King, the one who got himself killed because he would not be silent. Chaos or community—where do we go from here? The choice is ours.” 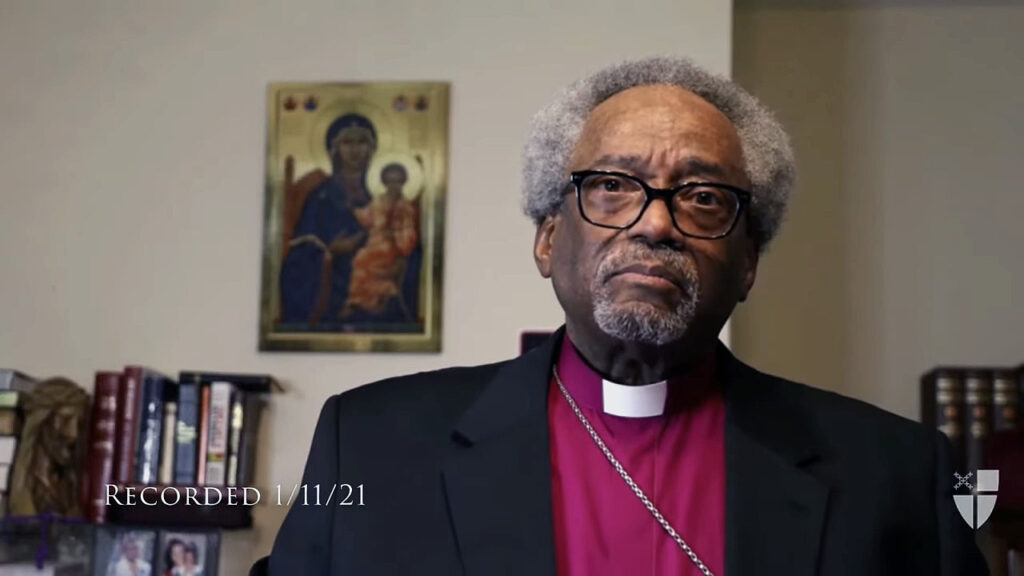 Bishop John Harvey Taylor blessed the gathering and, in a videotaped message, Episcopal Church Presiding Bishop Michael Curry offered a concluding call to action, also referencing the capitol rioters: “The truth is, this past Wednesday we saw the abyss … and we must make a decision.

“Dr. King said it this way in 1967, where do we go from here — chaos or community? He said that in the midst of a war in Vietnam that was tearing the nation asunder. He said that as there were protests in our streets, as political conventions were upended, as a contentious election was soon to happen, as … the despair of the poor cried out and our cites burned and he said we will either learn to live together as brothers and sisters or we will perish together as fools. The choice is ours.

“There are moments of decision when people of good will and human decency must decide, will we descend into chaos or will we choose community? Will we simply submit as victims of hate, or will we stand up as people of faith? The choice is ours.”

Noting that, for viewers at least, the choice was made with baptism, Curry offered resources for following the way of love. He called upon everyone to engage the work of love, of truth and reconciliation and commitment to cultivating relationships across difference.

The diocesan commemoration also included excerpts of King’s writings, including “Remaining Awake through a Great Revolution,” a March 31, 1968 sermon he preached at the Washington National Cathedral.

During that sermon, King famously said: “We are tied together in a single garment of destiny, caught in an inescapable network of mutuality … For some reason, I can never be what I ought to be until you are what you ought to be.”

Participants also heard excerpts from “Agenda for the 90s,” by well-known Washington, D.C. Episcopal teacher, theologian and layperson Verna Dozier: “The cross is not only a symbol; it is the sign of the collision of the kingdom of God and the kingdom of this world.

“I think that is what the temptation stories point to: Jesus’ absolute commitment to the vision of God above every other commitment. And I think working out the meaning of such a commitment would make an exciting and troubling agenda for the church.

Other readings included “I Sing of a New American,” written by the Rev. Pauli Murray, writer, lawyer, co-founder of the National Organization for Women, and the first Black woman ordained an Episcopal priest. She was included in The Episcopal Church calendar of saints in 2018.

Similarly, a videotape of Massachusetts Bishop Suffragan Barbara Harris’s famous challenge to the church regarding LGBTQ full inclusion also was included: “How can you initiate someone and then treat them like they’re half-assed baptized?”

Soul-stirring musical performances were offered by the Los Angeles Harbor College Chorale, under the direction of Professor Byron J. Smith; The Spirit Chorale of Los Angeles; and the Episcopal Chorale, founded and directed by Canon Chas Cheatham; along with several soloists and accompanists.

A virtual offering was collected on behalf of Los Angeles’s H. Belfield Hannibal Chapter of the Union of Black Episcopalians and the Hammons Fund for Black Seminarians.

The fund was named in honor of the ministry of the Rev. Canon Jamie Hammons, a former King-Drew Hospital chaplain and now retired deacon and pioneer leader in diocesan Black ministries. 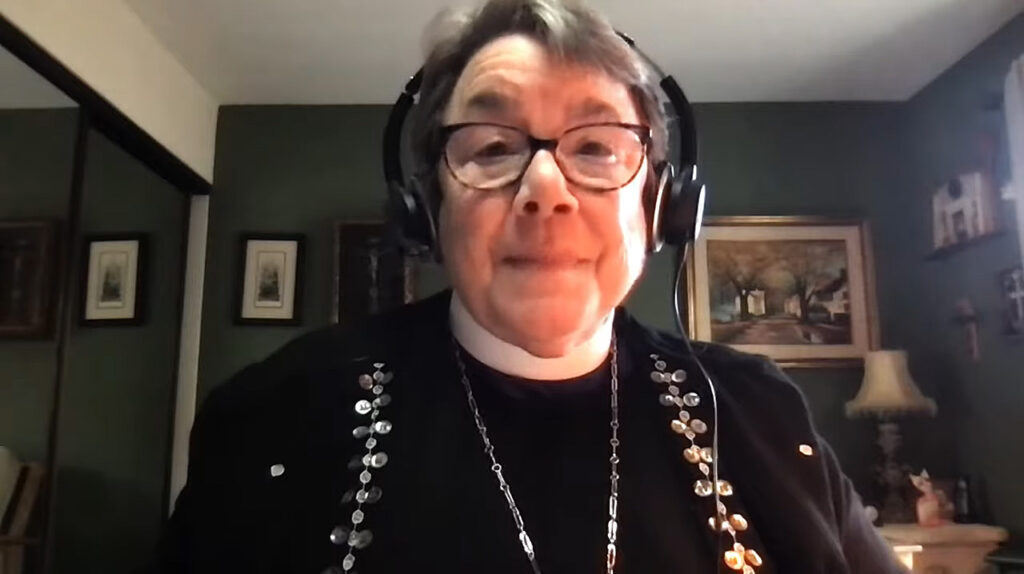 In a weekend of celebrations honoring King, Bruce said she was also “honored” to participate in the national Union of Black Episcopalians monthly “Talk2Talk” webcast.

“Before we can really be who we are called to be, by King, by Jesus Christ, we have to speak the truth and we have to teach the truth, which means un-whitewashing our history and being able to speak openly and honestly about what has been done in this country,” Bruce told the diverse audience from across The Episcopal Church.

The church has a unique call to be or to become that place, she added: “Where people can hear the truth in love, experience forgiveness and grace, talk honestly with each other about a history that has yet to be completely unfolded, not only for the Black and brown community, but also for our Asian brothers and sisters.

“We need to be, as a church, that voice crying out in the wilderness, there’s a better way, a way to be honest, a way to move forward. Jesus promised it. Martin Luther King promised it, saw it. Now we have to work to make it happen.”