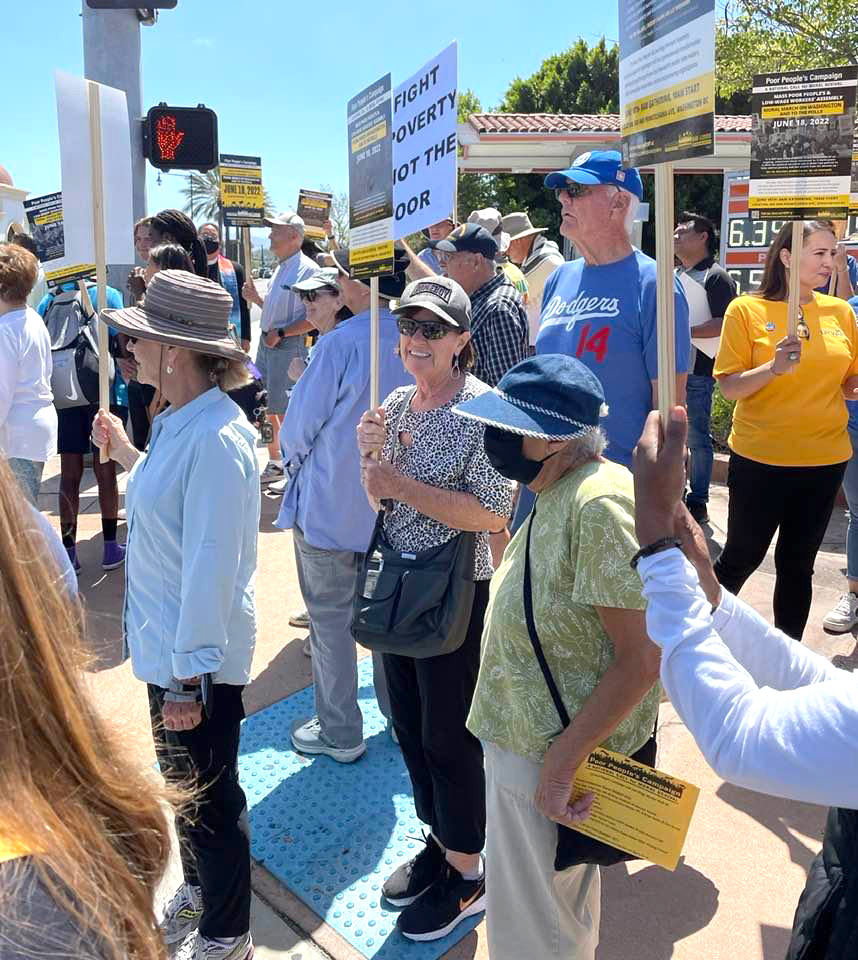 Episcopalians were among those who gathered on June 18 for a “Poor People’s March” in support of the national “Poor People’s Campaign: A National Call for Moral Revival” rally in Washington, D.C.

Occupants of passing cars honked horns, cheering and raising their fists in “power to the people” solidarity as participants from as far away as Los Angeles and San Diego joined the nearly 2-mile march. Some marchers carried signs reading “Fight Poverty, not the Poor” and shouted a rallying cry: ‘What do we want? Justice! What do we want? A living wage! When do we want it? Now!”

The march began at Geneva Presbyterian Church in Laguna Woods, where organizer Joyce Swaving, bishop’s warden at St. George’s Episcopal Church, greeted about a hundred participants. “This is an amazing week, the one-month anniversary of the tragedy that happened here,” she said, referring to the May 15 shooting at the Taiwanese Presbyterian Church, which meets at the site. A nearby banner bore an image of John Cheng, a physician who died trying to disarm the gunman, and read: “Our Hero. Hate has no home here.”

“We hold dear those lost to gun violence, to poverty, to the lack of access to adequate health care,” Swaving said. “We gather together as privileged Orange County folks, standing in solidarity and being willing to lean in and to listen to stories because that is how we truly learn about one another.”

David Wenwei Chou, 68, of Las Vegas has been charged with hate crimes, murder, attempted murder and other felony counts in the May 15 shooting. Chou, who is Chinese, reportedly harbored a deep hatred for the Taiwanese people and did not believe Taiwan should be separate from China.

The Rev. Steven Marsh, Geneva’s senior pastor, told the crowd: “We are in a moral and economic and political crisis in our country, and we’re taking action; millions of our citizens are on the edge of hunger and eviction and still without health care or living wages.”

The Rev. Beth Johnson, a Poor People’s Campaign worker and pastor of the Palomar Unitarian Universalist Fellowship, Vista, in San Diego County, offered a land acknowledgement in honor of the Acjachemen, Tongva, and Kizh peoples, and homage to African ancestors who were “placed in bondage, falsely named as chattel and forced into labor, who were called slaves but never submitted to such and have always been fully human with an unbroken connection to the divine and each other.

“We honor our African ancestors for the unpaid labor upon what is now called the Americas. We commit to the continued struggle for liberation and reparations for it is only through freedom and justice that we truly give honor.”

Johnson noted that the Washington, D.C. march was happening simultaneously. “Dr. Barber said moments ago, ‘This is not an insurrection. This is a resurrection,” she told the gathering.

The call, she said, is to “continue dismantling the interlocking injustices of systemic racism, white supremacy, poverty, the war economy, militarization of our borders and our communities, ecological devastation and dismantling the false moral narrative of religious nationalism.”

Johnson said there are 140 million poor and low-wealth people in the U.S. “The pandemic called workers essential but did not give them the essentials they needed and still need to take care of their families. The threats to our democracy are so present that each and every one of us is needed. Our footsteps, our voices, and our presence matter, beyond this day, to the polls and to justice. With each step of the way, we know that we are making that long march toward justice.”

Christine Martinez, a member of UCFW (United Commercial and Food Workers) union, encouraged the marchers, describing how the union had organized “to achieve the biggest contract in the grocery industry” by staying strong and standing together in solidarity in spite of unfair labor practices and attempts to divide workers.

“We must continue building on momentum, fighting for justice everywhere,” she said. “Because when we fight, we win!”

“The Poor People’s Campaign understands that, as a nation, the United States is at a critical juncture. We need a movement to shift the moral narrative, to impact policies and elections at every level of government, a moral fusion movement necessary to break the silos of our work and divisions.”

He cited the campaign’s 15 demands, including equal pay for equal work, an end to anti-union practices, and implementation of federal and state living wage laws, among others.

Rabbi Heather Miller, founder of Keeping it Sacred, a 480-plus member Jewish center that explores and illuminates sacred texts and facilitates community, shared a story about “Micah” (whose name she changed), who has been living on the street off and on for two years, a young Black man “who’s been overpoliced” but continued to seek employment in spite of rejection after rejection by employers because of his record.

Micah finally was hired, helping to clean up a Los Angeles-area sports arena after games. “One day, his boss called him into the office and told him his coworkers complained he was too smelly. He had washed up that morning but deduced that his outer jacket smelled.

“For the poor, the smallest thing can derail you,” said Miller. Scraping by, earning enough money for food, Micah had not been able to afford to wash his jacket, she said. “It would have cost $2 for detergent; $1.75 for bus fare; and $3 to rinse and dry. He didn’t have $6.75 to keep his jacket clean. The price of a cup of coffee cost him his job.”

She added: “Those who are experiencing homelessness are extremely susceptible. That little bump in the road can derail them completely and it is important that we acknowledge this. Today we resolve to go forth to take steps forward with our bodies to physically demonstrate our commitment to take steps forward as a society to address this type of vulnerability.”

Recalling the Old Testament story of Abram, called by God to venture out into new horizons, to become Abraham, a different, truer version of himself, Miller blessed and sent the group forward to a second stop, the Lutheran Church of the Cross.

“We go forth together, not just going forth out into the world, we go forth to ourselves” and to a greater sense of community, to spiritual renewal, discernment, enlarging boundaries, magnifying justice, “to embody the love we want to leave in the world. We pray with our feet.”

At Church of the Cross, the Rev. Leland Lantz greeted marchers, where issues of affordable health care and inclusion were addressed.

Pastor Dale Brown of Resurrection Beach Metropolitan Community Church shared about the marginalization of and discrimination related to gender identity and orientation, those whose voices often go unheard and who often are without supportive community.

“There are many, especially LGBTQ people who do not even have family to rely on because after they chose to share who their authentic self was, they were disowned by family and friends,” he said. “And imagine the pain and the suffering that these people must endure. And how that emotional pain and suffering affects every aspect of their health.”

Often, they must choose between “putting food on the table and health insurance,” he said. A parishioner who is transitioning is concerned about retaining health insurance should they lose their current employment, or finding employment that offers diversity support, he said.

Austin Lynch, organizing director with the Unite Here Local 11, which represents 32,000 food and hotel workers in Los Angeles and Orange counties, and in Arizona, introduced Graciela and Maria, two hotel workers who were instrumental in helping unionize their respective hotels after experiencing unfair labor practices.

Graciela was fired when a huge equity firm bought the hotel where she worked a few years ago. They hired her back the next day as part of an outside employment agency, for less pay and with more rooms to clean, Lynch said.

Similarly, Maria and coworkers at a Dana Point hotel organized a union during the pandemic, he said, adding: “There’s a lot of hope in our union. We fight hard and we win improvements for people.”

Yet there are still many challenges. Maria Sanchez and others who work at the Anaheim Convention Center shared the story of a friend, Nancy Marchand, who worked with them and who lived – and died – in her car. Without family, there has been no one to claim her body or to make funeral arrangements. Sanchez and two other friends of Marchand asked the gathering to help pay for the cost of a funeral for her.

The march concluded at St. George’s, Laguna Hills, where the focus was on essential workers. Marchers enjoyed refreshments and community building time.

Mendelsohn, rabbi of the Reformed Temple of Laguna Woods, said asking for minimum wage is not enough. “What we really need is more than minimum wage. Right now, there are places hiring at minimum wage, but they are not giving the income needed to support a family. Why should someone have to work three jobs to be able to support their family? Why should someone else be discriminated against because of skin color, because of gender identity? Justice calls for an equal playing field for every human being on this earth.”

He quoted the Book of Deuteronomy (16:18-17:13): “Justice, and only justice you must pursue.” To campaign organizers, the marchers, and union members who guided participants safely along a busy stretch of El Toro Road, he added: “Thank you for letting us pray with our feet.”