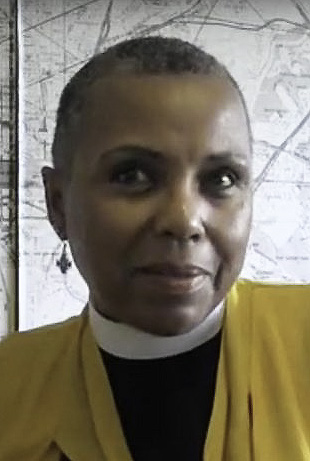 “Where Do We Go From Here: Chaos or Community” is the event theme, drawn from the title of King’s last book, published in 1969.

The event is sponsored by the diocese’s Program Group on Black Ministries and the H. Belfield Hannibal Chapter of the Union of Black Episcopalians. Planners include Bishop Suffragan Diane M. Jardine Bruce, Canon Suzanne Edwards Acton, the Rev. Guy Leemhuis, Stacey Forte-Dupré, Pamm Land, Melissa Hayes, the Rev. Margaret McCauley and Canon Chas Cheatham, director of the Episcopal Chorale, which will supply music for the program.

Before entering the ordained ministry, Gayle Fisher-Stewart spent 20 years as an officer in the overwhelmingly white Metropolitan Police Department in her hometown, the 70-percent African American community of Washington, D.C., beginning in 1972. Later she earned master’s and doctor’s degrees at the University of Maryland and became a consultant to law enforcement agencies and a university-level teacher of criminal justice, and wrote a multicultural training manual for police officers. She was ordained in 2015 after earning a theology degree at Wesley Seminary. While serving as associate rector of Calvary Episcopal Church, Washington, D.C., Fisher-Stewart founded the Center for the Study of Faith in Justice. She currently is interim priest at St. Luke’s Church in Washington.