80th General Convention is scaled down, but deputies look forward to meeting in Baltimore July 8 – 11 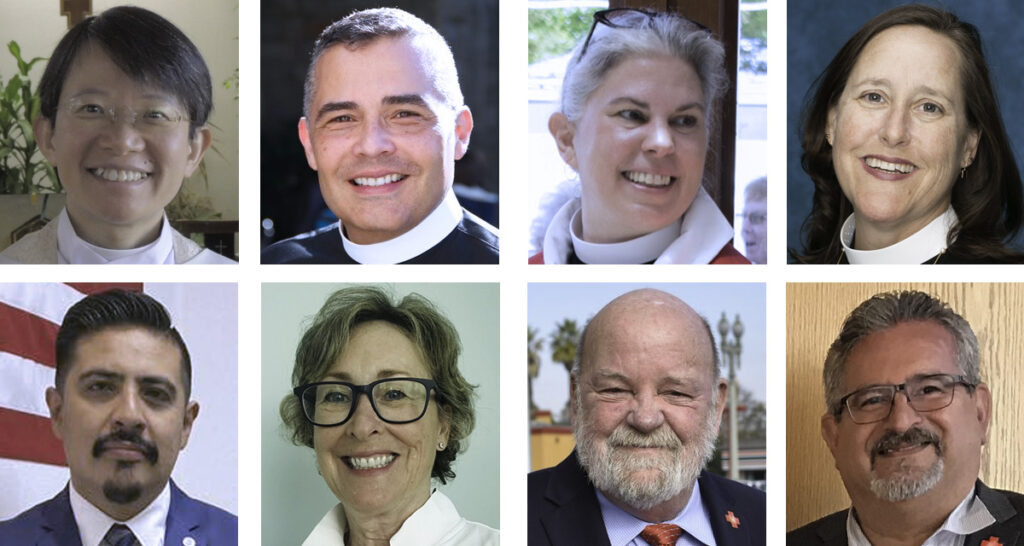 [The Episcopal News] Even a scaled-back, significantly changed 80th General Convention of The Episcopal Church in Baltimore, Maryland, July 8 – 11 doesn’t dim the enthusiasm of members of the Los Angeles deputation who are eagerly looking forward to representing the diocese at the church’s largest gathering.

Transitions and pandemic-related concerns mean three – the Rev. Antonio Gallardo; the Rev. Hsin-Fen “Fennie” Chang; and Ivan Gutierrez – will move from alternate to the role of deputy. All say they are anticipating connecting with Episcopalians from across the church and considering legislation focused on issues of diversity, inclusion, antiracism, and social justice.

A pandemic-related postponement had shifted the convention, originally planned for July 2021, to this year. Recently the presiding officers shortened convention from the original eight days to four amid continued Covid concerns. Presiding Bishop Michael Curry and the Rev. Gay Clark Jennings, president of the House of Deputies, on May 26 also announced additional public health precautions, including restricted attendance, frequent rapid testing and wearing high-quality face masks at all times.

Bishop John Harvey Taylor praised the presiding officers’ actions. “The church did an amazing job figuring out how to bring people together as safely as possible to do what we might call the canonical and constitutional work of General Convention,” he said.

In addition to a shortened General Convention, the presiding officers’ design group has also recommended prioritizing legislation that needs to be taken up in July while postponing noncritical matters to 2024 when the 81st General Convention meets in Louisville, Kentucky.

Under the plan, which will be submitted for approval June 7 by the Joint Standing Committee on Planning and Arrangements and Executive Council, attendance will be restricted to bishops, deputies, essential staff and volunteers and a limited media presence. Visitors will not be allowed; there will be no exhibit hall.

“As for our essential work, everyone who was planning to go to convention, for whatever reason, is essential to Jesus and the corporeal work of the Holy Spirit, so I’m sad for those who won’t be there. We’ll really miss them!” Taylor told The Episcopal News in a recent email. “We’re still waiting for word on what the final work will look like on the resolutions our committee has been working on, about Ukraine, the United Nations, Israel and Palestine, and other issues.”

The Los Angeles deputation has also changed, losing two clergy – the Rev. Yein Kim, and the Rev. Nancy Frausto, who transitioned out of the diocese – and a lay deputy, Kathryn Nishibayashi, who has resigned.

Kim began serving Feb. 6, 2022, as priest for Congregational Life at Trinity Wall Street Church in New York, and in August 2021 Frausto was named director of Latinx Studies at Seminary of the Southwest in Austin, Texas. Their departures mean two alternates, the Rev. Antonio Gallardo, and the Rev. Hsin-Fen (Fennie) Chang, take their place as deputies.

Nishibayashi, a three-term lay deputy to General Convention, reluctantly resigned, citing concerns about Covid. “You know how much I love convention and being a deputy, but with all the uncertainty around Covid, I’ve decided it’s best for me not to go to Baltimore, even for a shortened convention,” she wrote in an email to other deputies.

Instead, alternate Ivan Gutierrez, president of the diocesan Standing Committee and a parishioner at La Iglesia Magdalena in Glendale, will assume the role of lay deputy. “I am looking forward to discussions of diversity and inclusion,” he told The News recently. “As a Mexican American, I really would like to see my community grow within The Episcopal Church.”

Concurrently, Gutierrez, 38, a community relations professional, is also focused on immigration reform and inclusion but wonders if, “with the limited timeline, some of those conversations may be cut short.”

He also hopes to “demystify the process,” he said.

“There is a lack of information about what The Episcopal Church is,” he said. “Even in Los Angeles, I’m always having to explain, particularly to Latinos, what it is to be an Episcopalian.

As a “first-timer,” Gallardo, rector emergent at St. Luke’s Church in Long Beach, and a member of the Corporation of the Diocese and Diocesan Council, said he is looking forward to learning how decisions are made within the church, developing new connections, and experiencing convention’s welcome – especially from Latin American countries in Province IX – and accessibility for those with mobility issues.

“At the last General Convention, for example, there were a lot of complaints on social media from Spanish-speaking people that, in some areas, translation was not available, and even when it was, it was not the best,” he said. “At times, they didn’t even know what they were voting on.”

He noted that convention’s structure tends to leave out “a lot of people. How many people have the time and resources to leave their home for up to two weeks, especially if you are hourly workers and if you don’t have vacation time or cannot take leave time? Even in vestry meetings in church, we tend to ignore that.”

Avoiding such barriers can include offering Uber rides to those without transportation to evening vestry meetings, as he has done in congregations and, in one case, paying the hourly wages of workers to enable them to attend a Friday meeting of the diocese’s Social Enterprise Academy.

One person, Dr. John Cheng, an Orange County sports medicine doctor, was killed when he attempted to disarm the gunman, David Wenwei Chou, a Chinese national and a security guard from Las Vegas. Chou opened fire on a group of worshippers May 15, killing Cheng and wounding five others.

“Those are my people,” Chang said. What happened “is different from the racism issue we’ve been talking about here, and from Asian Americans targeted, especially during the pandemic.

“Sometimes it is hard for majority people to understand why he would target his own people, but it reflects what’s going on in Taiwan. His family was forced to move to Taiwan around 1949, because of the civil war in China. He never felt he belonged to Taiwan. It’s not really the same as the issue here, between white and Black and other people of color, but it still has to do with a sense of belonging and the issue of identity.”

She added, “As Asian Americans, we sometimes feel that our voices are almost unheard, this is the reality. We need to be more active. As members of a minority, we need to stand out where there is an opportunity to speak on behalf of our people.

She has been assigned to the Evangelism and Church Planting committee. Because of the pandemic, the legislative committees began meeting online in November 2021.

The Rev. Canon Melissa McCarthy, canon to the ordinary for the Diocese of Los Angeles, a third-time deputy and chair of this year’s deputation, is a member of the Churchwide Leadership committee, which “receives and proposes Resolutions on churchwide leadership especially, but not limited to, issues related to compensation, benefits, equity, family leave, pro forma resignations, and related matters.”

“We began our work early in 2022 via Zoom,” said McCarthy. “We have already held two hearings, including one on developing a uniform paid family leave policy. This resolution (AOO3) came out of a lot of difficult and detailed work by the task force. It’s complex and so interesting! (The task force report is here.)

In addition to her committee work, McCarthy in interested in climate, racial justice and LGBTQ+ issues, but expects resolutions on those subjects to be tabled because of the shortened convention schedule and emphasis on administrative matters, such as the church budget and elections. “Determining what is essential is work the General Convention team is doing, and I do not envy them!” she added.

At this point, her expectations are limited by these practical concerns. “I hope we will get through General Convention with everyone healthy, she told The News. “This convention feels so different than the two other conventions I have attended, because it is! It is going to be so short and so focused and without all the fun! However, I know our current president, Gay Jennings, will make sure we have fun even while we are doing the work.”

Canon Julie Dean Larsen, a vice chancellor of the diocese and two-time deputy, is assigned to the Agencies and Boards legislative committee. “With the convention only four days now, I expect it will be testing: we enter the House of Deputies, we vote, return to our hotel rooms, and nothing more,” Larsen wrote in an email to The News. “I do hope that we pass legislation that will make a virtual convention possible, should this happen again.”

The Agencies and Boards Committee is considering legislation that would fund pension benefits for clergy in financially challenged dioceses, she said. There are also “reports that suggest there may be further resolutions. Transitional Ministry seems to want a change in its mission and the Archives is struggling with a new vision. The Title IV bishops’ discipline panel and appeals panel need changes to the canons to reflect the fact we no longer have provincial courts,” she added.

She predicted that “only essential legislation – the canonical corrections – will make it to the consent calendar. I also expect some of the new legislation will be to authorize a virtual convention in the future,” she said, adding: “I will be praying for the health of all the attendees during the four days.”

“We are living in a time when technology is opening doors and possibilities and is a mechanism for surveillance intrusion,” he said. “It could be a substantial issue for the church, since so many have moved to hybrid worship and maintain online platforms. We don’t want unwelcome parties infringing on our ability to do that, whether Zoom-bombing worship or tracking participants.”

The church is just beginning to grapple with the ethical, technical, and theological issues associated with digital transition, he said.

“This convention won’t be the big family reunion we have every three years, but the work will be done, and the most important thing is to take every measure to keep everybody safe.”

Canon Jim White, a five-time deputy and two-time alternate, said the committee on Commissions and Committees, to which he is assigned, will consider resolutions as they come through the pipeline at convention. “Everything is still up in the air because we’re trying to decide what is essential legislation,” he added.

White submitted Resolution D026, proposing creation of an LGBTQ+ task force for inclusion. “It asks the church to do an audit of LGBTQ+ ministries, similar to the racial justice audit of a year or so ago, to get a picture of where we are with LGBTQ+ ministry in the church,” he said.

Although the convention will be scaled back, White said he is still excited to attend. “I just love convention. There may not be visitors, and no exhibit hall, but I just want to be there and see what happens. It’s historic.”

Also serving as a clergy deputy is the Rev. Rachel Nyback, rector of St. Cross Church, Hermosa Beach. She is a member of the Title IV Disciplinary Canons Committee.