At left: Bishop John Harvey Taylor, left, and Canon to the Ordinary Melissa McCarthy flank three of the four new canons named during the Diocesan Convention dinner on Nov. 11. From right, the new canons are: Canon Sister Sarah Patricia Terry, the Rev. Canon Barbara Stewart, and the Rev. Canon Bill Lane Doulos. The Rev. Canon Juan Jiménez also was honored, but was unable to attend the presentation. At right: Taylor (with the help of Samantha Wylie, convention coordinator, right), presents a life-size “Flat Jesus” to the Rev. Canon Kelli Grace Kurtz, who stepped down this year as chair of the Program Group on Missions. Photos: Janet Kawamoto

[The Episcopal News] During the Nov. 11 Diocesan Convention dinner, Bishop John Harvey Taylor named four people as canons of the Diocese of Los Angeles, and honored the Rev. Canon Kelli Grace Kurtz, who stepped down this year as head of the Program Group on Missions.

The title “canon” dates from medieval times. It denotes a key advisor to a bishop or a cathedral community. In more recent times the title has been given to both clergy and lay members who have made a significant contribution to the ministry of the church.

Taylor noted that in previous years honorees were named canons of the Cathedral Center of St. Paul. After the diocese’s historic cathedra, or bishop’s chair, was moved to St. John’s Cathedral in Los Angeles, and the Echo Park facility was renamed “St. Paul’s Commons,” Taylor directed that future canons would be styled “canon of the diocese.”

“So tonight,” he said, “I have the privilege of naming the first four canons of the Diocese of Los Angeles in recent or even living memory.”

The four canons are: 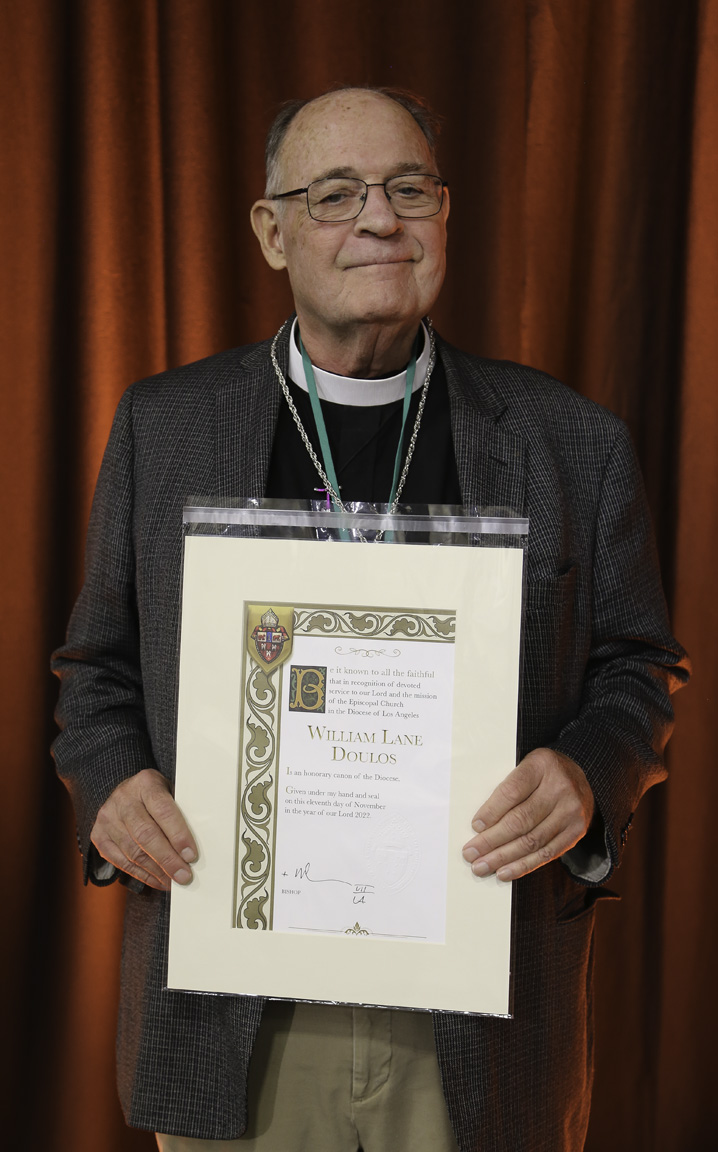 The Rev. Canon William (Bill) Lane Doulos
Doulos began his ministry among the poor and homeless in 1974 as executive director of Union Station, a Pasadena storefront hospitality center for the poor and homeless founded by clergy and volunteers from All Saints Church. He served there for 17 years, until 1991. He later was director of Housing Ministry at Church of Our Saviour, San Gabriel, and its Jubilee Transitional Housing sober-living homes for people in recovery from addiction. Ordained a vocational deacon in 2014, Doulos is the author of A Journey of Compassion: Letters From a Street Minister. 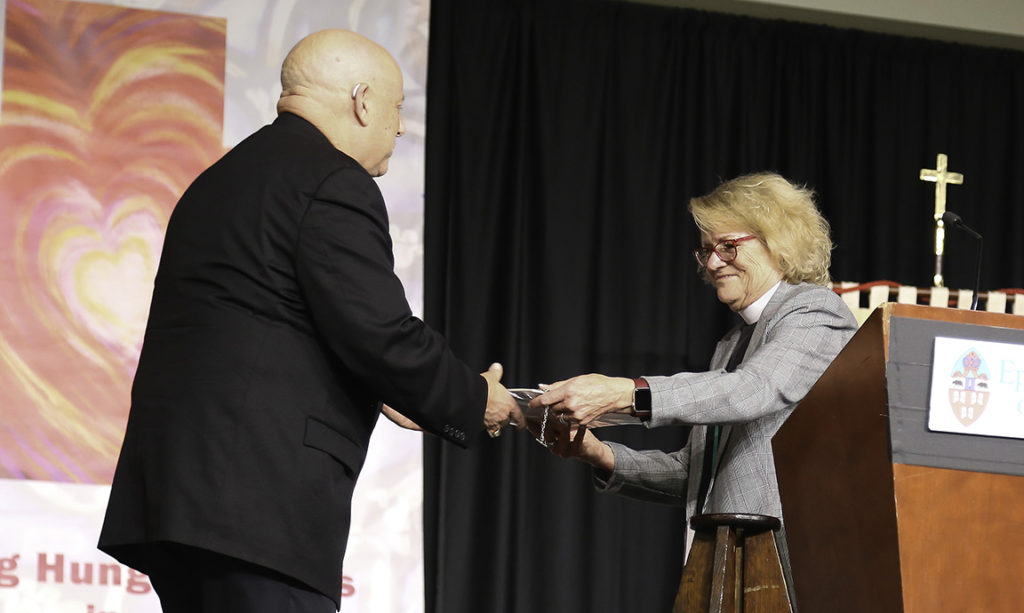 The Rev. Canon Juan Jimenez
As priest at the century-old St. Michael’s Episcopal Church in Anaheim since 2001, Jiménez presides over one of the largest congregations in the diocese, but one that struggles due to its members’ limited financial resources. Jiménez, who was born and raised in Cuba, officially retired in 2017, but continues his ministry at St. Michael’s, where he is working to begin a housing ministry on its campus. He previously served congregations in Florida and Texas. 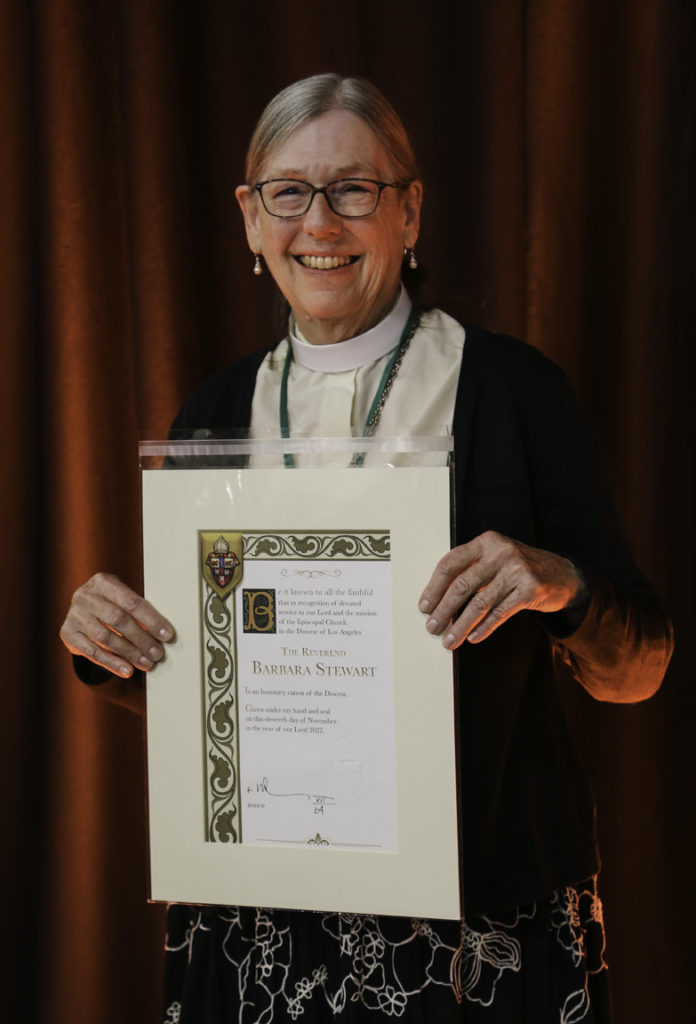 The Rev. Canon Barbara Stewart
Stewart was priest-in-charge, then rector of St. John’s Church, Costa Mesa (2000 – 2013), and a member of the Commission on Ministry. She was a leading figure in the Diocese of Los Angeles’ companion relationship with the Diocese of Cuernavaca, Mexico; worked with Cristosol, a ministry to dioceses in Latin America; and is a longtime supporter of Latinx ministries in the L.A. diocese. She previously served the congregations of St. Augustine, Santa Monica, and St. Francis’, Palos Verdes. Before entering the ordained ministry, Stewart, who holds a doctorate in genetics from UCLA, taught biology and genetics at UCLA, Moorpark College and Marlborough School. 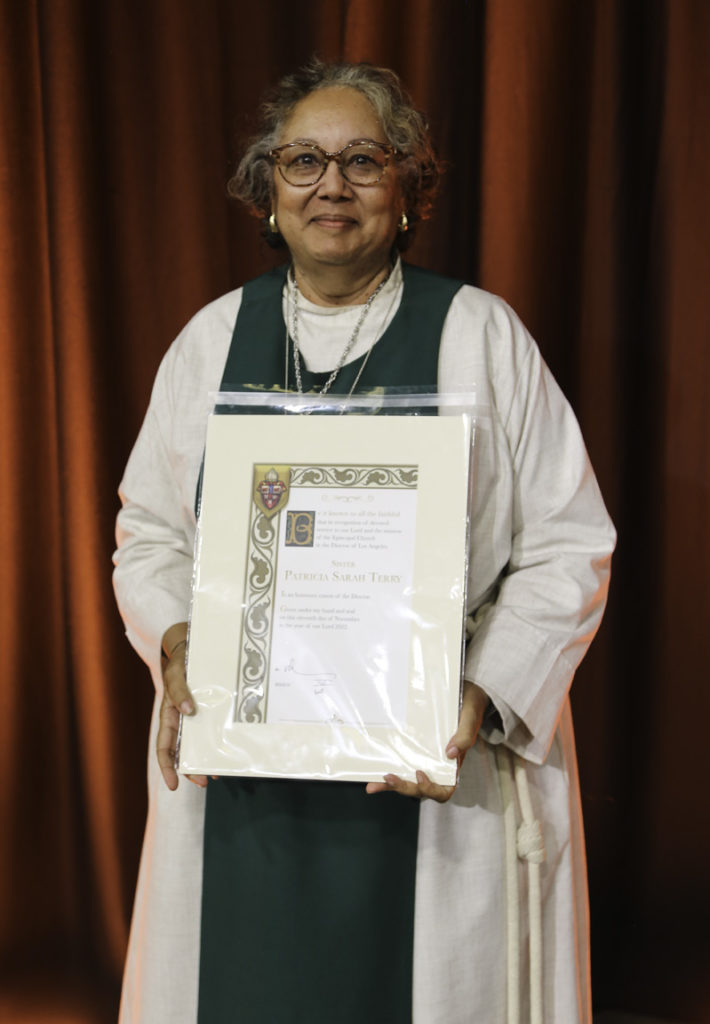 Canon Sister Patricia Sarah Terry
In 2021 Taylor named Terry as chair of the Bishop’s Commission on Gospel Justice and Community Care, founded to foster improved relations between law enforcement and the community. Terry, who before her retirement was an attorney at the Internal Revenue Service and the Pension Benefit Guarantee Corporation in Washington, D.C., is the widow of a former law enforcement officer and a member of the Anamchara Fellowship, an Episcopal monastic community committed to intercessory prayer and service, pastoral care, and spiritual direction. 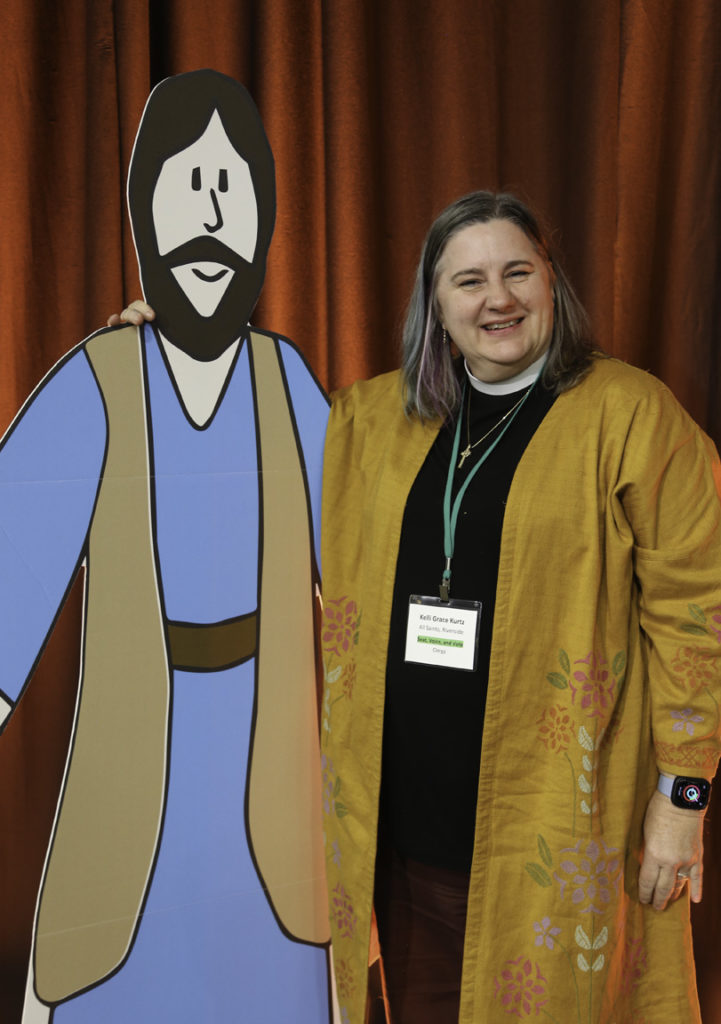 Kurtz steps down from Program Group on Missions

Taylor also paid tribute to The Rev. Kelli Grace Kurtz, who from 2008 to 2022 served on and chaired the Program Group on Mission Congregations, which advises the bishop and Diocesan Council about the allocation of ministry grants that help the missions of the diocese carry on their work. The mission grants represent a significant portion of the diocese’s annual expenditures: a total of $1,109,000 in the 2023 budget adopted by the convention.

Kurtz, who is also rector of All Saints’ Church, Riverside, and former vicar of St. John’s, La Verne, posts frequently on social media about “Flat Jesus,” a paper image that many Episcopalians carry with them during events, vacations and other travel as a constant reminder of the Savior’s presence. At the convention dinner, Taylor presented Kurtz with a life-size Flat Jesus figure.