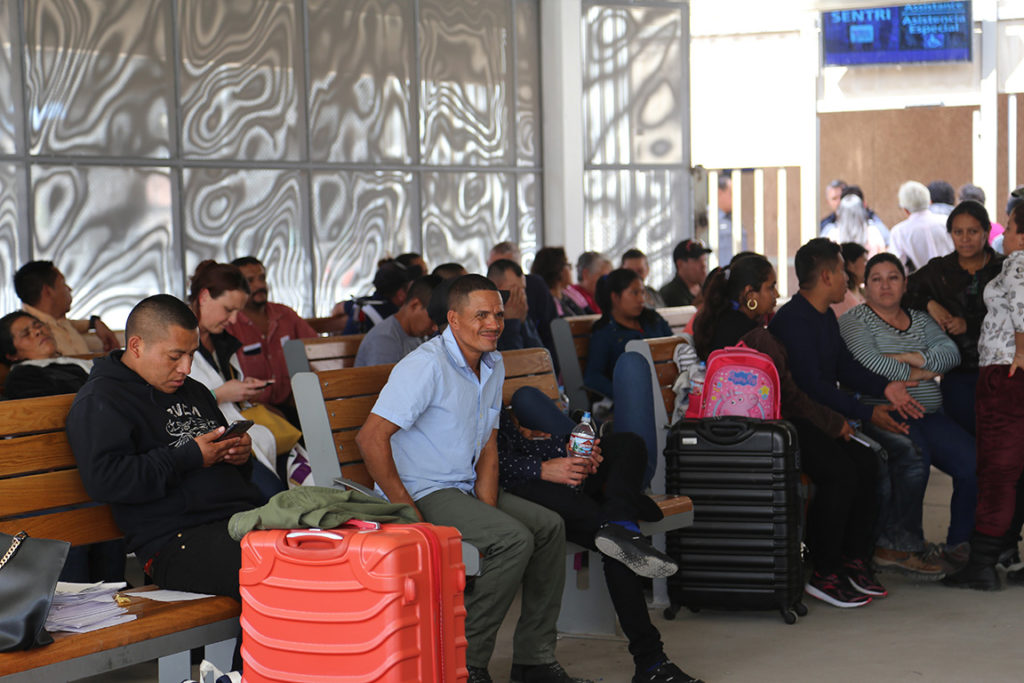 In this pre-pandemic photo from 2019, refugee families await permission to enter the United States, where they hope to be reunited with their children who were detained when the parents previously attempted to apply for asylum.  Photo: Janet Kawamoto

Interfaith Refugee and Immigration Service (IRIS), an agency of the Episcopal Diocese of Los Angeles, is already feeling the positive effects of President Joe Biden’s sweeping immigration reforms, “with an increase in calls from the community to come in and file initial DACA applications,” according to executive director Meghan Taylor.

The new administration has set out to create a roadmap to citizenship for the 11 million undocumented immigrants who live, work, and contribute to the United States. “These are homeowners, business owners, parents of U.S. citizens, people who have been here for decades, living in the shadows,” Taylor said.

Reinstatement of the DACA – Deferred Action for Childhood Arrivals, or “Dreamers” program – could potentially mean legal status for an estimated 3.6 million undocumented immigrants brought to the U.S. as minors by their parents.

Biden’s initiatives also reverse the anti-Muslim travel ban, paving the way for “IRIS families who have not been able to be reunited with loved ones from Muslim countries for the past four years and (who) were ineligible to apply for visas” to finally join their families in the U.S.

“There is one case we are super excited about,” Taylor added. “Hopefully, sooner rather than later we’ll be greeting him at the airport with his parents, who haven’t seen him in four years.”

With Biden’s plan to raise the annual ceiling for U.S. refugee admissions to 125,000, IRIS and others “are excited and rebuilding,” Taylor said. “It’s been a long, painful four years and we’re looking forward to getting back to work reuniting families here in Los Angeles.” 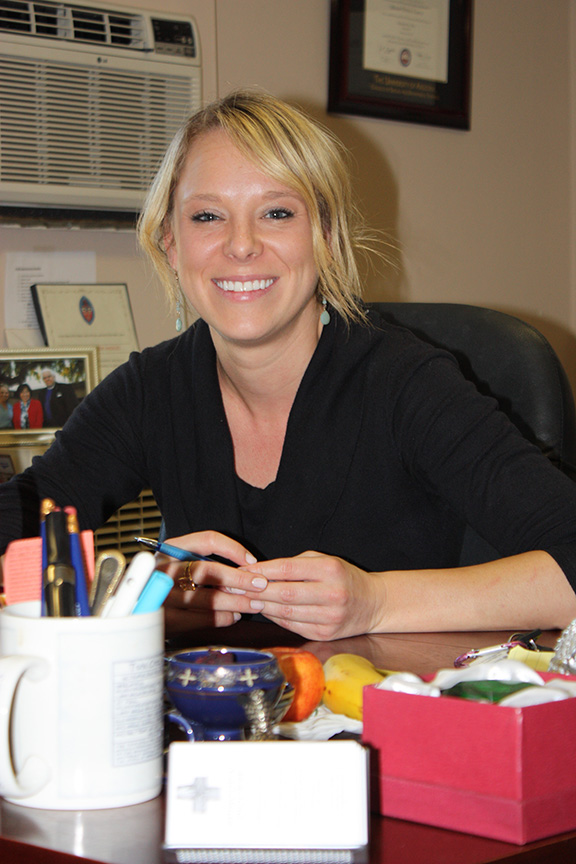 Meghan Taylor, executive director of IRIS, immigration and refugee ministry of the Diocese of Los Angeles, is pictured in her office at St. Francis Chapel in the Atwater Village area of Los Angeles. Photo: Janet Kawamoto

For example, “When Trump left office, the ceiling was set at just 15,000,” said Taylor, who has witnessed the shuttering of many other refugee programs. The number of Southland resettlement agencies (excluding San Diego) dropped from nine in 2016 to three today, including IRIS, she said.

IRIS has managed to survive by cross-training staff – under a special certification by the Department of Justice – to work with immigration attorneys to offer assistance and representation for immigrants.

Rebuilding will mean increasing staff size, which had dwindled from 20, at one point, to five – “seven, if you count interns,” she said. “We’ve been gutted in terms of capacity over the past four years. We’ve been hanging on by prayer and a shoestring and trying to help as many people as we can.”

Now, with two new grants and potentially other support, including from churches, mosques and synagogues, the agency is not only planning to rebuild but also to expand, including its legal department, she said.

During 2021: rebuilding, with the church’s help

Taylor cautioned, however, that rebuilding efforts will likely be hampered by current Covid-19 travel restrictions, which apply both to refugee arrivals and Department of Homeland Security officials who travel overseas to investigate and approve prospective admissions to the country.

Yet, she said, “we are hearing that arrivals could begin as early as summer, beginning with Central America, for Honduras, El Salvador and Guatemala.”

Additionally, some of Biden’s proposals, including increasing the annual number of arrivals, will take effect the first full fiscal year of his administration, which begins October 1, 2021. “We will be rebuilding capacity this year and we are optimistic that 2022 will be a good year,” Taylor said.

Meanwhile, the scrappy agency is gearing up for a new program, thanks to a $25,000 grant from The Episcopal Church’s United Thank Offering, “to provide orientations to recently granted asylees over the next 12 months.”

Since 2005, IRIS has helped more than 12,000 people find hope, hospitality, and a safe haven in the Southland. Refugees come to the U.S. through an overseas admissions process via the U.S. State Department, while asylees present themselves at the border, requesting protection from persecution because of race, religion, nationality, political opinion or membership in a particular social group. IRIS enables refugees to achieve legal status, find housing and employment, receive counseling, educational and other support services.

A $100,000 grant over two years from the Refugee Council USA will aid IRIS in providing extended case management to refugees and asylees in partnership with Home for Refugees USA, and to create partnerships between refugees and faith groups and community groups.

St. Cross Church, Hermosa Beach, is one such partner. Members of the congregation have been dropping off welcome cards at the church for an Iranian refugee who had been stuck in Australia and is slated to arrive on Feb. 18.

“Normally, we’d have people greet him at airport and throw a party when he arrives at LAX. But because of the pandemic, instead we are writing cards that he will have when he reaches the apartment, to welcome him to our country,” said the Rev. Nathan Biornstad, associate rector for pastoral care.

Biornstad, along with volunteers, has been readying a furnished apartment owned by the church to house their refugee guest. The apartment has been stocked with food, personal hygiene and other items to welcome him.

The Rev. Rachel Nyback, rector, said aiding refugees has been part of the church’s mission for decades.

“St. Cross remembers taking in Vietnamese refugees back in the 1970s,” she told The Episcopal News recently. “We don’t know exactly what he needs yet, until he gets here. We will work on getting him whatever he needs … while he gets on his feet. We look forward to supporting him as he builds his life in the United States.”

Biornstad said he hopes other congregations that are able to help will volunteer to work with IRIS’s resettlement efforts. “We have an opportunity to provide real relationships with someone who may not know anyone in the whole country.

“It’s such a humbling opportunity,” he added. “I cannot imagine what it’d be like to have things so bad in your home country that you literally need to flee. It’s a real opportunity to bless the nations and people of the world.”

Taylor said IRIS is already working with another church in Orange County to resettle an Afghan family of five and “is excited to rebuild staff stronger than before, because we went through this together. We will be able to help more people in the coming months and years.”