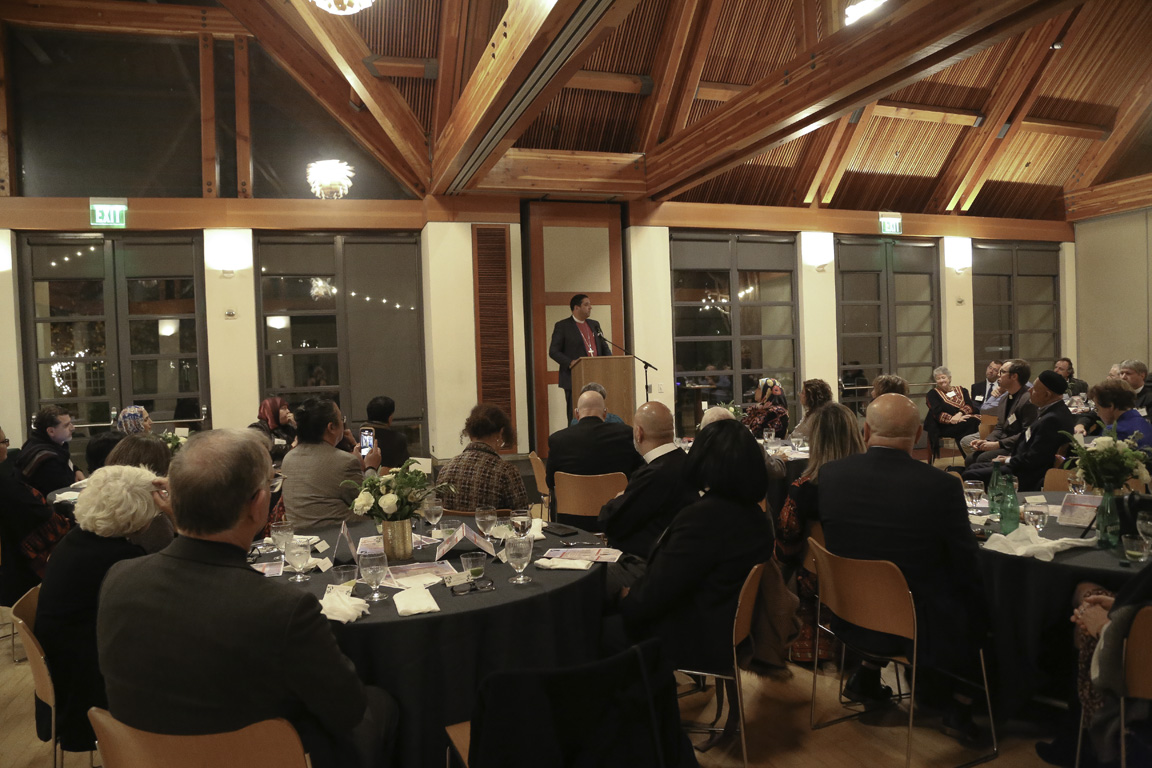 Members of the Palestinian and Middle East diaspora from Southern California – Muslims, Jews and Christians – and local interfaith guests gather for a dinner with Archbishop Naoum of the Episcopal Diocese of Jerusalem on Nov. 13 at Church of Our Saviour, San Gabriel. Photo: Janet Kawamoto

[The Episcopal News] Jerusalem Archbishop Hosam Naoum delivered an invitation of hope, healing, reconciliation, determination, and hospitality on Nov. 12 to delegates attending the 127th annual meeting of the Diocese of Los Angeles in Riverside. 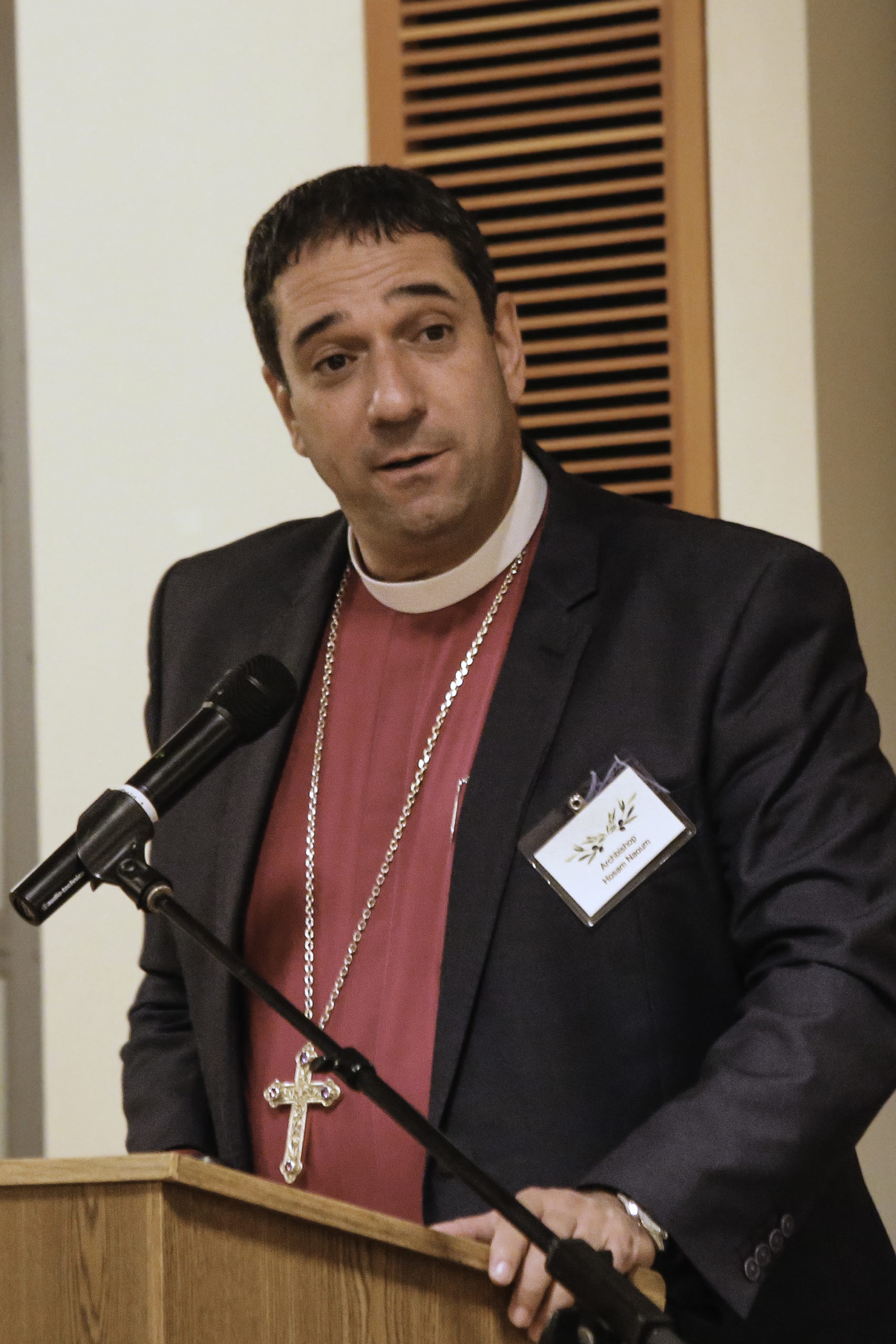 “We live in a part of the world where the work of reconciliation is very much needed. The ministry of reconciliation is very much at the heart of the not only Palestinian Christian theology, but the theology of Christians in the Middle East. As you know, my people have suffered rate over the past 75 years of displacement and occupation. We don’t call it just and lasting peace for all people,” he told delegates.

“At the same time, we refuse to let hatred and bitterness well within our hearts. Yes, we often feel righteous anger when we see injustice happening, and we are not afraid to speak out against it. That is something as children of God we can do. But that is different than holding hatred in your heart.”

Since 2005, the Diocese of Los Angeles has enjoyed a companion relationship with the Jerusalem diocese, which encompasses 28 congregations and 35 hospitals, schools and other institutions in Israel, Palestine, Lebanon, Syria, and Jordan. It also has “more barbed wire than any other diocese in the world,” according to the Rev. Canon Donald Binder, Naoum’s chaplain, who introduced him.

Humanitarianism is also at the heart of the diocese’s ministry, said Naoum, 49. “You can see that we have more institutions than congregations, because we deeply believe that sharing our Christian faith, sharing the love of Christ to those who are not necessarily Christian is a very important act of reconciliation, of inclusivity,” he said. The diocese operates the Ahli Arab Hospital in Gaza, and the Holy Land Institute for the Deaf in Jordan, ministries representing “the DNA of what we do as the Diocese of Jerusalem.”

His invitation to delegates to visit elicited both applause and laughter: “Please do come and see for yourself, to be with your sisters and brothers in the land of the Holy One,” Naoum said. “We are less than 2% at the moment of the whole population, but I always say that with the number of Christian pilgrims who come to Jerusalem it goes up to 50%.” 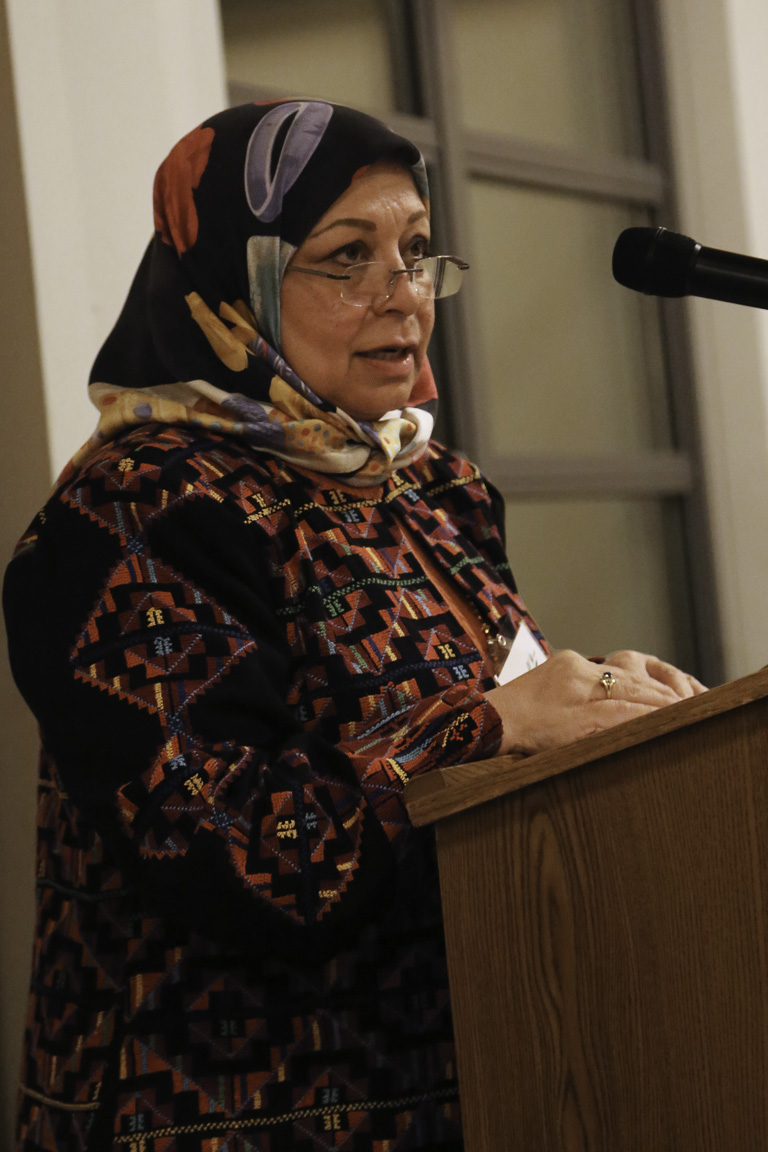 Hedab Tarifi, past president of the Islamic Center of Southern California, a foundation board member of the Muslim Public Affairs Council and a member of the Los Angeles Council of Religious Leaders, offers a blessing before the Nov. 13 dinner. Photo: Janet Kawamoto

As an Israeli citizen, Naoum, who studied at Rhodes University in Grahamstown, South Africa, and was mentored by Anglican Archbishop Desmond Tutu, and at the Virginia Theological Seminary, told delegates he must apply for a visa three weeks in advance before making a pastoral visit outside Israel. Israeli citizens are typically prohibited from entering Syria, Lebanon and a number of other Middle Eastern countries.

The daily challenges of navigating borders, and military checkpoints have caused many Christians to leave, “but this doesn’t mean that we give in or surrender,” Naoum said. More recently, right-wing extremist Jewish settlers have been accused of trying to remove the Christian and Muslim presence from Jerusalem.

“It’s where we are at the moment,” Naoum said. “We know that Jerusalem continues to be a very special place, not only for Palestinians, but also for Jews and Muslims. But … some people want to change, … that characteristic of Jerusalem being a shared city for all, with freedom of worship to every culture, and every religion.

A video of Naoum’s address is here.

A message for Palestinians and Arabs living in California

While conflict often dominates media reports of the Holy Land, the truth is that Muslims, Christians and Jews do live peacefully side by side, and “Christian and Muslim students are side by side in every single activity that we have,” Naoum told those attending a Nov. 13 dinner hosted by Bishop John Harvey Taylor and Canon Kathy O’Connor at the Church of Our Saviour in San Gabriel. 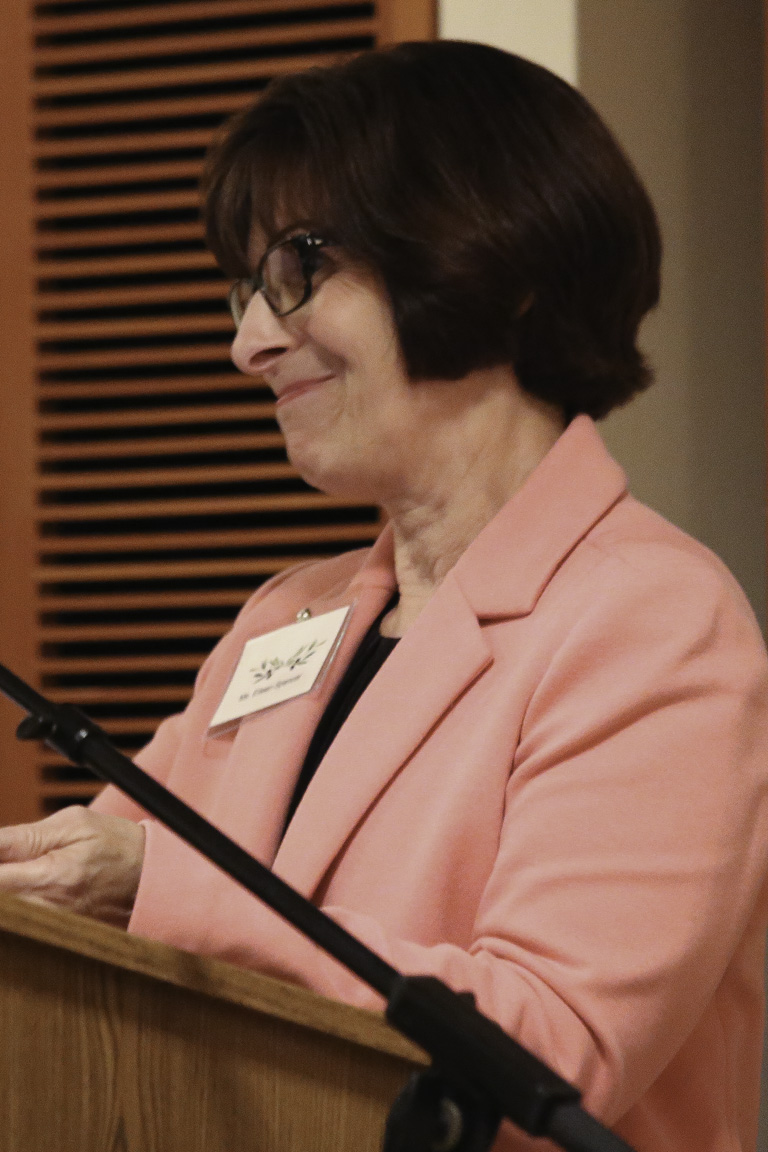 Eileen Spencer, newly installed executive director of the American Friends of the Episcopal Diocese of Jerusalem, describes the nonprofit’s work supporting the institutions of the diocese. Photo: Janet Kawamoto

“It feels really wonderful to be connected again,” he told attendees. “It’s like coming home from home. I think of you as our ambassadors here … to raise more awareness about the work of the humanitarian institutions,” he told the guests, including Muslim members of the Palestinian, Jordanian and Middle East diaspora from the Los Angeles area.

Hedab Tarifi, past president of the Islamic Center of Southern California, a foundation board member of the Muslim Public Affairs Council and a member of the Los Angeles Council of Religious Leaders, welcomed both Archbishop Hosam and Rafa Naoum, saying “you’re among your family.” Before blessing the food, Tarifi said she had often questioned why God allowed pain and suffering such as is experienced in the Holy Land. “These dialogues always ended up with God bringing peace to my heart, reminding me that I’m only responsible for doing the best I can, and the rest is in God’s hands.”

Eileen Spencer, the newly installed executive director of the American Friends of the Episcopal Diocese of Jerusalem, praised “the 24 hospitals, schools and centers for children with disabilities in Lebanon, Jordan, Israel, Gaza, the West Bank and Jerusalem. They are the hands and feet of Christ, serving the most vulnerable families and children, regardless of race, ethnicity, religious affiliation, or ability to pay. They persevere under the most horrific circumstances with minimal resources.”

On a recent visit, to “eleven of these institutions … the staff were not only providing care and education, but a refuge for these families, a haven of hope, where children can escape the violence and persecution of their daily existence,” she said. “Each day, these leaders are bringing compassion, joy, and the light of Christ to their work and also to the families they’re serving. They’re providing hope in a part of the world where hope is in short supply. And these angels need every single one of us. I challenge you to join us in this mission.” 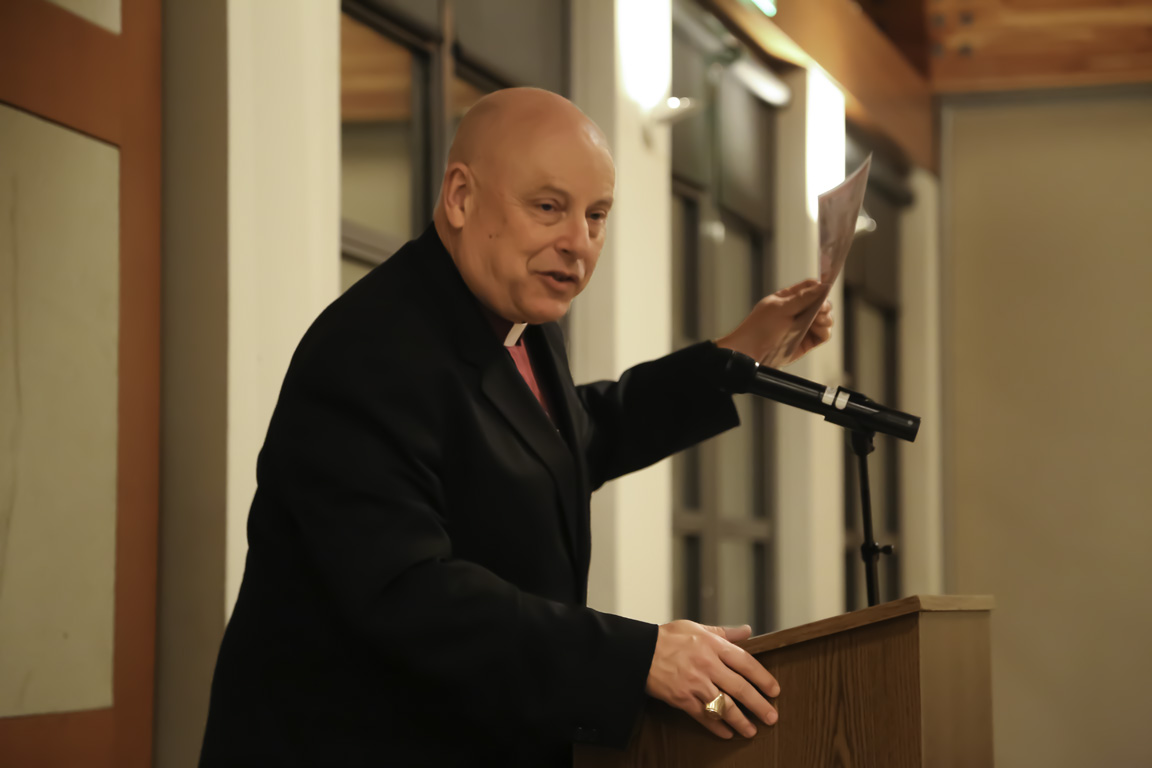 Naoum said this year marks the centennial celebration of designating “the Good Friday offering within the Episcopal Church and the Anglican Communion” to support and maintain the Diocese of Jerusalem.

Such ministries, as well as maintaining the Christian presence in the Holy Land, is work that “we do on your behalf,” he said. “That’s why we ask your support, why we ask you for a commitment, because it is your ministry as well. This is the place where Christianity began. The place where Jesus was born. The Anglican Diocese of Jerusalem is the only church in the Holy Land, that covers all the places where Jesus physically visited, and walked during his earthly ministry.”

What offers him hope is the mission of Christian witness and transformation and also the Palestinian diaspora, he said. “For the last 2,000 years, we have been witnessing to the love, to the reconciling love of Jesus Christ in the place where it all happened. And we will continue to do so for the next 2,000 years.” 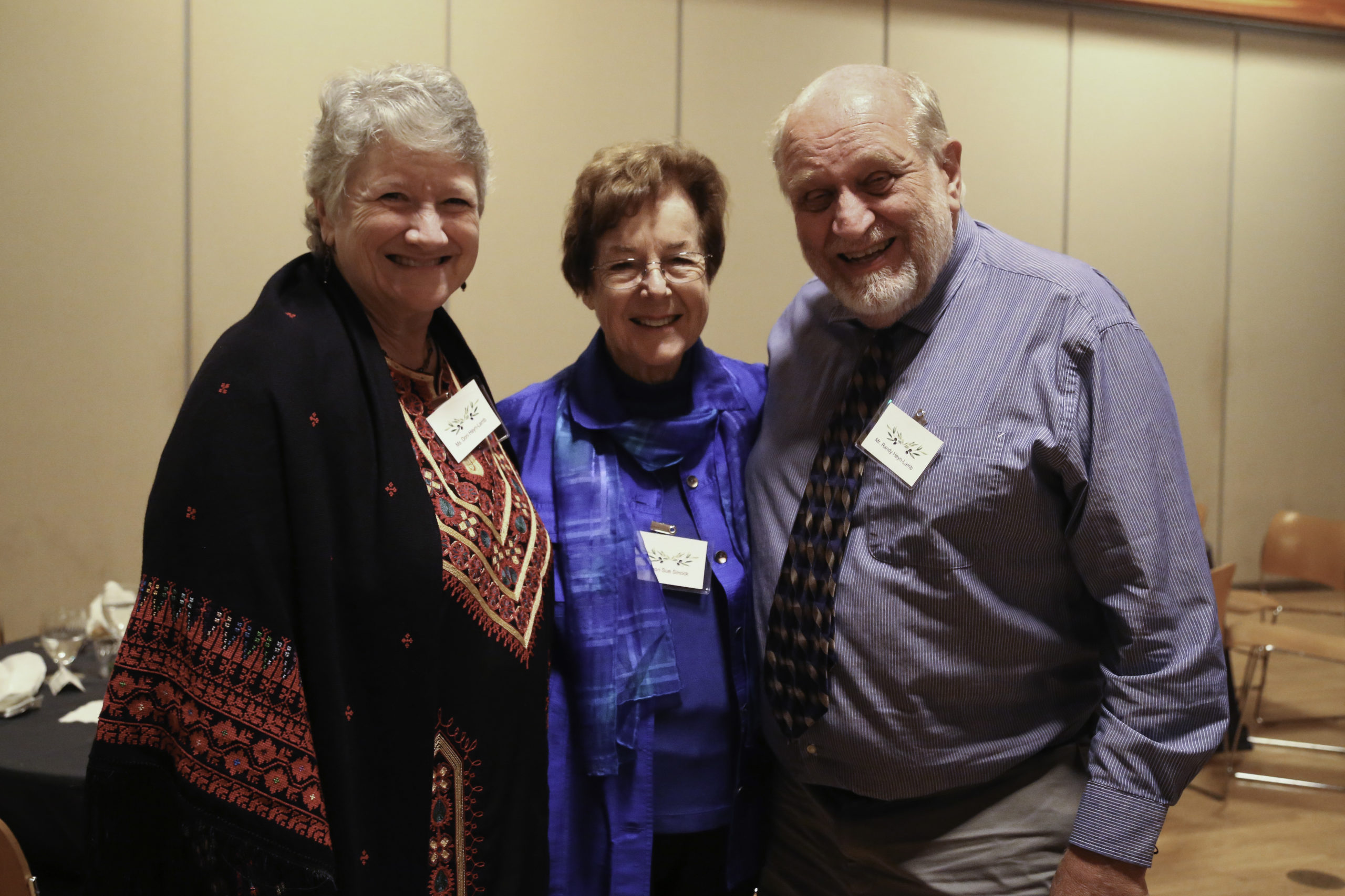 Attending the dinner in honor of Archbishop Naoum were three stalwart supporters of the Diocese of Jerusalem and its ministries: Doni Heyn-Lamb of All Saints, Pasadena; Canon Susan Smock of Church of Our Saviour, San Gabriel; and Randy Heyn-Lamb, also of All Saints. Photo: Janet Kawamoto

Bishop John Harvey Taylor said that the Los Angeles diocese, along with the ELCA Southwest California Synod, are exploring a collaboration “in terms of an Arab Christian mission outreach in both the Synod and the diocese – because when people get together, magic happens.”

Born and raised in Galilee, Naoum studied in South Africa where Archbishop Desmond Tutu was his mentor, and also at the Virginia Theological Seminary. Fluent in Arabic, English and Hebrew, he is married to Rafa, a mechanical engineer and educator, who accompanied him on the visit. They have three children.