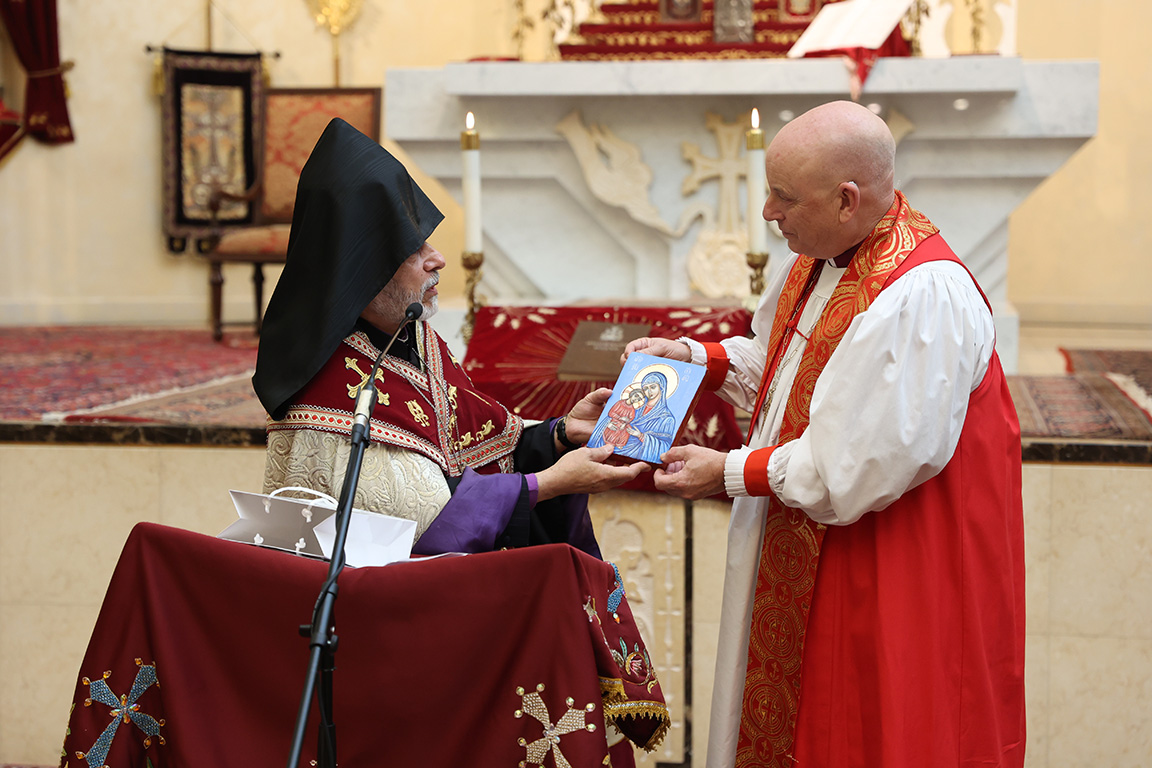 Archbishop Hovnan Derderian of the Western Diocese of the Armenian Apostolic Church presents an icon to Bishop John Harvey Taylor in recognition of the ecumenical work carried out by the Armenian and Episcopal dioceses during an ecumenical prayer service at at St. Leon’s Ghevondiants Cathedral in Burbank. Photo: Vahe Sargsyan/Western Diocese Media Department

[The Episcopal News] – The Western Diocese of the Armenian Apostolic Church honored Bishop John Harvey Taylor as “Ecumenist of the Year” during its 12th annual ecumenical prayer service Dec. 6 at St. Leon’s Ghevondiants Cathedral in Burbank.

Archbishop Hovnan Derderian presented Taylor with “an icon of the Blessed Virgin Mary, prepared in Armenia. This will be a reminder of our loving Christ, our unity in Christ, on a very special day when we pray together, and we pray for one another.”

The Advent spirit of expectancy, hope, and transformation were recurrent themes throughout the evening’s prayers. So were unity and peacemaking, as Taylor, preaching from the Gospel of John (17:20-26), told the gathering: “Unity is a building block for God’s most important project, which is to make sure that we all see God. To make sure that we all know that we’re made in love, saved in love, and bathed in love, to make sure we understand that the way of God and the way of love are the only things that work.”

Recalling that Jesus said this unity would be a witness to the world of his and of God’s presence, Taylor said: “Jesus is saying; Jews, talk to Muslims; Armenians, talk to Anglicans. And here’s a tough one: Democrats, talk to a Republican.”

Noting Jesus’ admonition to walk in love, and that there are now 45,000 distinct Christian denominations, Taylor added: “Love is the one true religion, and mutual respect and servanthood are our most effective means of evangelism in an unbelieving world.

“And yet, that perfect unity, shining on the horizon remains our goal as people of faith who start small, with small, kind words for friends, strangers, colleagues and even irritating relatives at Christmas.”

The livestreamed service may be viewed here. 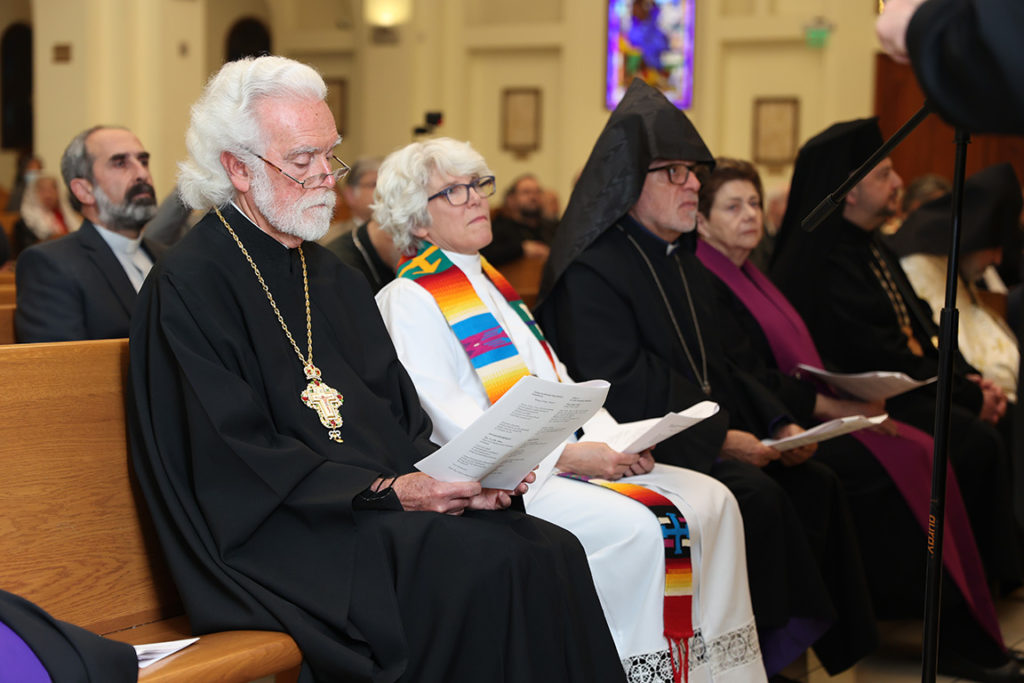 Alexei Smith, priest of the Melkite Catholic Church in the United States and ecumenical officer for the Roman Catholic Archdiocese of Los Angeles, and Bishop Brenda Bos of the Evangelical Lutheran Church in America were among the many prominent clergy attending the prayer service. Photo: Vahe Sargsyan/Western Diocese Media Department

Spirit of Advent, season of friendship

Derderian and others invoked the season’s promise, “preparing ourselves to embrace the baby Jesus, the Son of God, who brings peace into the depths of our hearts, and also inspires us so that we may always live the spirit of prayer which unites us all, empower us all with a vision of unity in the life of the Christian church.”

Taylor also referenced the continuing friendship between the two dioceses, since “a moment in the life of the Armenian people when a darkness beyond compare was beginning to fall, that the Holy Spirit lit a small spark of friendship and fellowship and collaboration between our churches in Los Angeles.”

The first ecumenical dialogue between the two was held in November 2005 at Derderian’s initiation. It sparked ongoing meetings among faith communities, who were also represented Dec. 6. The group has focused together on issues of religious education, social justice, liturgy, and youth ministry. In 2007, the Los Angeles diocese hosted an 80th anniversary celebration of the Western Diocese of the Armenian Apostolic Church of North America at St. John’s Cathedral.

The western diocese was officially established November 28, 1927, and encompasses the area west of Mississippi, including Hawaii and Alaska. Headquartered in Burbank, it includes more than 50 churches and is the largest outside Armenia. It is believed about 300,000 Armenians live in Southern California and about one million reside in the United States.

The Armenian Apostolic Church’s roots date to the fourth century, when St. Gregory the Illuminator formally established the church in Armenia. A Christian raised in Cappadocia, he was consecrated the first bishop of Armenia by Leontius, the metropolitan of Caesarea. According to tradition, Gregory saw a vision of Christ, who told him where to build the church. He is called St. Gregory the Illuminator for enlightening the nations with the light of the Gospel through baptism. The Armenian church broke with the orthodox church after the Council of Chalcedon in 451 A.D.

In September 2022, an Episcopal church group traveled to Armenia as part of a small Churches for Middle East Peace delegation to learn about the modern challenges Armenian Christians face. As the full delegation arrived on Sept. 13 in Yerevan, Armenia’s capital, news agencies were reporting some 100 troops had been killed in a long-contested region on the Armenian-Azerbaijani border. 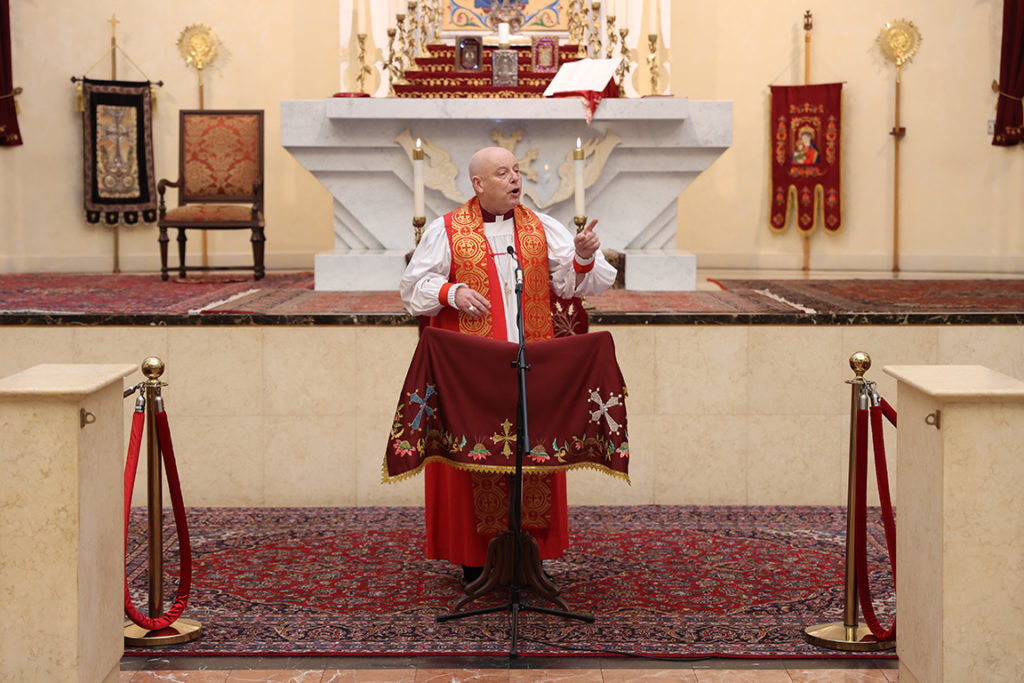 Bishop John Harvey Taylor of the Episcopal Diocese of Los Angeles, named ‘Ecumenist of the Year’ by the Western Diocese of the Armenian Apostolic Church, preached at the Dec. 6 service. Photo: Vahe Sargsyan/Western Diocese Media Department

‘A model of unity and leadership’

At the Dec. 7 service, Taylor praised Derderian as a model of unity and leadership. “Wherever he goes, the archbishop shows by word and deed, by every smile, by every gesture of benediction, that he embodies for his people, the quality of which our Lord Jesus Christ spoke.”

In the archbishop’s pastoral and ecumenical ministries: “He proclaims unity among young people and adults who almost never speak the same language … (and) encourages unity among those of us who may agree on nothing,” Taylor said.

Jesus spoke to apostles and friends whose first-century experience was not unlike the current “skeptical and secularizing culture,” Taylor added. “Remember that in the first century, Christians were in the minority as well. In the first century, the average Christians’ neighbor wasn’t likely to believe as they did, any more than our neighbor is likely to believe as we do.”

Although living in fearful times, “our Christian faith and practice make us strong,” Taylor said. “They show us the way to the light and to our joy. They bind us together, to fellowship and service, to sources of hope and power every time the world tries to make us fear and tremble.”

Noting tyranny “on the march” from Moscow to Beijing, from Ukraine to Taiwan, he added: “the miracle and magic of Advent and Christmas is the reckless promise that fear is a mirage and illusion, a stumbling block. Fear paralyzes us. Christ’s love empowers us. Fear turns people against one another. Love binds us together in unity. Fear teaches that we can’t. Christ whispers that we must. Fear will lead this world to darker and darker places. We see it in the news every day. Christ’s love will rescue the whole creation if we will only let it.” 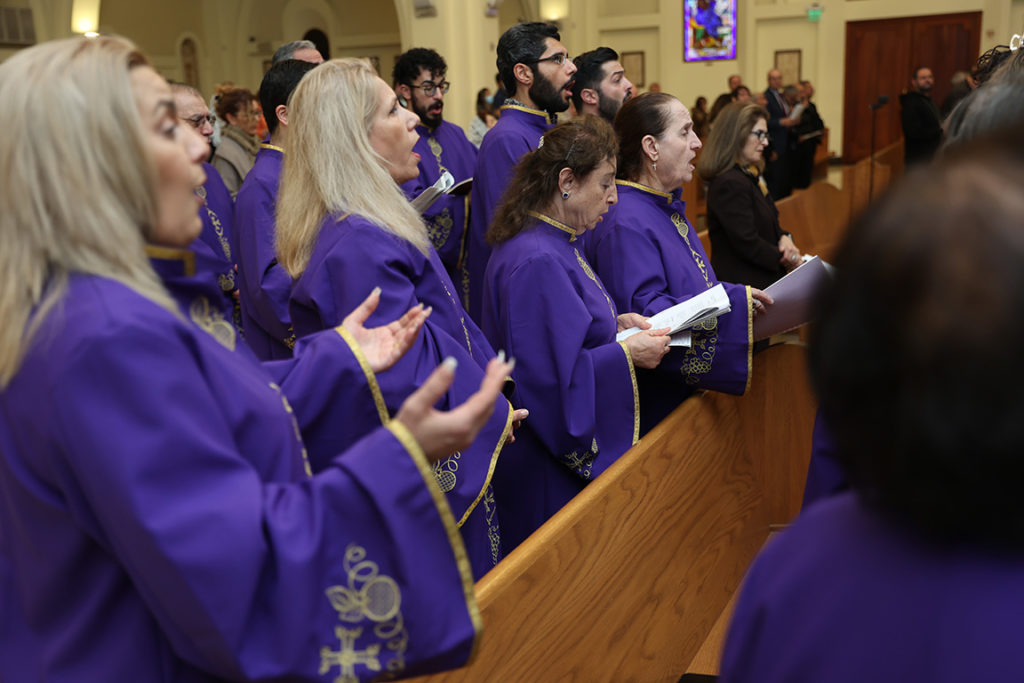 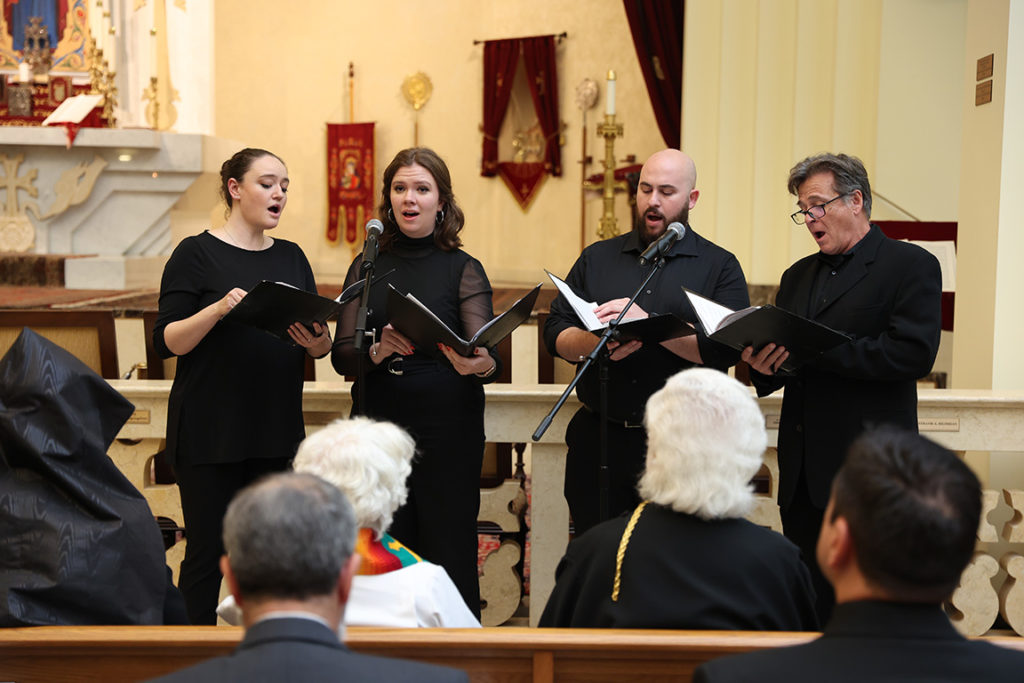 Providing music were the Coventry Quartet, a ministry of All Saints Episcopal Church in Pasadena, directed by Weicheng Zhao; and the St. Leon’s Choir.

Derderian thanked those in attendance, noting that such gatherings help to prepare to greet God spiritually. “We prepare ourselves to journey with him in the new year to renew and enrich our lives as Christians, and it is with this deep understanding that we are entrusted to lead and inspire the faithful.

“The stronger we are in our Christian faith, as servants of Christ’s Church, we are obliged to become architects of peace, especially in theses tumultuous times,” Derderian said. “Indeed, the world needs a hard reset. People yearn for spiritual renewal.” 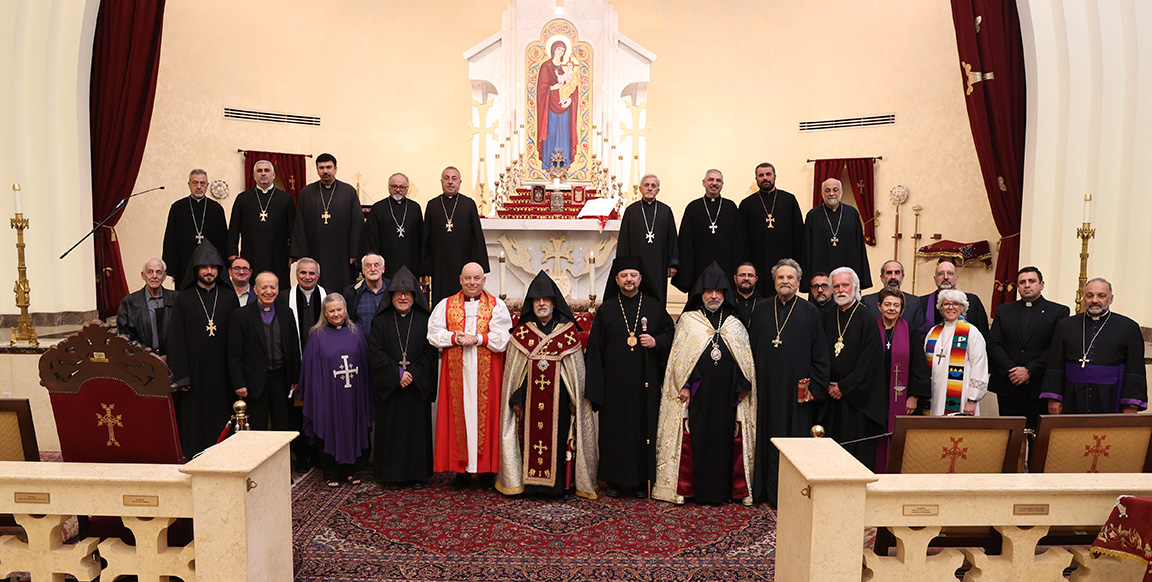