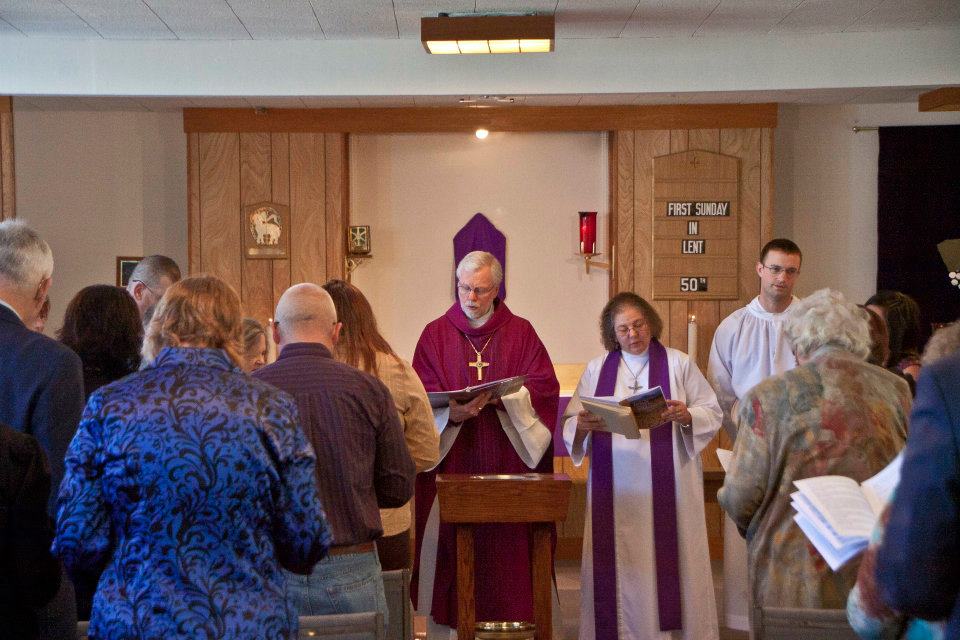 The Episcopal-Lutheran congregation at St. Paul’s – Shepherd of the Desert Church, Barstow, comes together for worship. Photo from Facebook

[The Episcopal News] Kristy Chambers said she and other church members proudly wore “We are Lutherpalians” T-shirts to the Sept. 23 Episcopal Night at Dodger Stadium, “and it was great fun,” she said recently.

Chambers, 53, has attended the blended Shepherd of the Desert Lutheran and St. Paul’s Episcopal church in Barstow for four years, and happily identifies both as Lutherpalian and with her cradle Episcopalian roots.

“There are some differences, sure, but I didn’t realize how similar the two really were until I saw them, side by side. It [blending congregations] can be done without a loss of identity.”

In addition to Barstow, there are at least three such Lutheran-Episcopal affiliations in various stages of formation in the Diocese of Los Angeles; in Big Bear Lake, Santa Paula and Seal Beach. Clergy and laity alike say the joys and blessings of engaging common mission far outweigh subtle differences in worship, polity, language and structure, and that agreements depend upon the local context.

“We are two churches, one family,” said the Rev. Mary Tororeiy who, as St. Paul’s vicar and Shepherd of the Desert’s pastor for four years, attends both Lutheran Synod gatherings and the Episcopal diocese’s annual convention, to be held Nov. 11 – 12 in Riverside.

The congregations share outreach ministry and space but maintain separate finances except for “One Campus,” a joint fund that covers utilities, maintenance, and other overhead expenses, she said.

The two churches began joint worship about 15 years ago, not long after the 2000 ratification of Called to Common Mission, a full communion agreement between The Episcopal Church and the Evangelical Lutheran Church in America. Nationally, the ELCA approved the denominational agreement in 1999. The General Convention of the Episcopal Church followed suit in 2000, after nearly 30 years of dialogue. The agreement allows each to retain autonomy and historic structures while exercising mission and witness together, as well as sharing clergy.

At St. Paul’s-Shepherd of the Desert, members of both denominations make up a joint leadership council and the congregation alternates between Episcopal and Lutheran worship every other week, although “it’s a hybrid liturgy,” Tororeiy said. “There’s lots of borrowing and sharing, and it’s involved a lot of give and take on both sides to be able to be together. That kind of borrowing has enriched the liturgy.”

Initially, worship alternated between the two locations, but financial realities and accessibility issues led to a more permanent move to Shepherd of the Desert, about a mile away.

“The vote was unanimous,” said Julie Hackbarth, 61, who has been a St. Paul’s member since age 5. “There was more parking, more meeting space.” Renting St. Paul’s to a local nonprofit generates revenue and an Episcopal chapel has been established at Shepherd of the Desert to preserve St. Paul’s history and to store other items, she said. 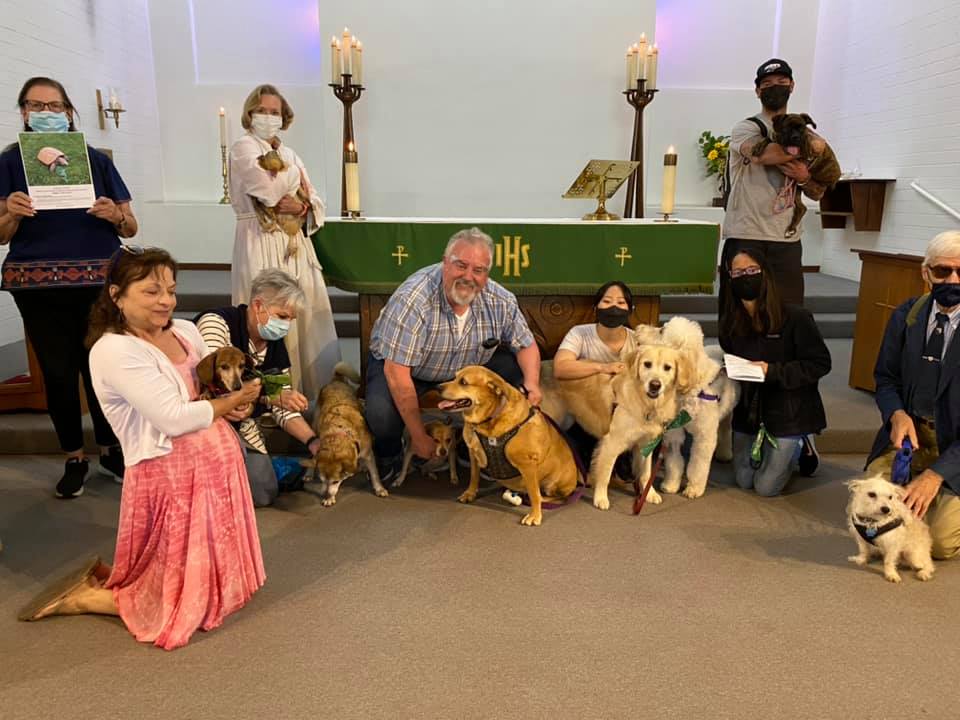 A Blessing of the Animals service on Oct. 10 brought Episcopalians, Lutherans and their pets to St. Paul’s – Emmanuel Church in Santa Paula.

‘One church, one body’ in Santa Paula

In Santa Paula, St. Paul’s Episcopal and Emmanuel Lutheran churches had shared space prior to a 2008 affiliation agreement, according to the Rev. Cynthia Jew.

With the blended relationship, finances were merged: “it really is, one church, one body.” A vestry council governs, added Jew, a professor in the counseling education department at Cal Lutheran University.

She takes a light-hearted, bicultural approach to each tradition, particularly during weekly liturgies and special occasions, like “decking out the church in red” for Reformation Sunday, to be commemorated Oct. 30 this year. “I have someone from the Lutheran congregation preach,” because it is important to Emmanuel to acknowledge the anniversary of Martin Luther’s posting 95 theses on Wittenberg Cathedral doors, sparking the Protestant Reformation.

There are more apparent differences. “We joke that the altar guild is almost exclusively Episcopalians – they know how to set the table,” while the Lutherans love potlucks and refreshments. “When I talk about Lambeth,” the every-ten-year worldwide gathering of Anglican bishops “the Lutherans are like, ‘I don’t know what that is. But when I talk about polity in the Lutheran church, the Episcopalians are saying, ‘what’s that’?

“When I first arrived, I reinstituted the sanctus bells,” Jew said. “The Episcopalians loved it; the Lutherans were confused. It’s just some of the funny things that happen. But we talk more about our similarities than our differences.”

Although “some might call our church a partnership, it is a full blend,” says Larry Brogdin, who had worshipped in the Lutheran church about 20 years and who preaches occasionally for Jew. “Everything felt very familiar coming together. It is an Episcopal church and a Lutheran church, and we try to make sure we hit all the right notes and avoid the sensitive nerves of everyone, and it’s going swimmingly.”

Brogdin, who is discerning a call to the diaconate in the Episcopal diocese, believes “the blending of the churches has made people ask more and more questions and that has meant more small group activities and more involvement. “

St. Paul’s-Emmanuel is known throughout the community as a small but go-getter church. Yearly they sponsor a Christmas boutique and Mother’s Day Tea, and the proceeds fund outreach to local homeless, hospice, and veterans ministries, Jew said. “For a congregation of less than 100 where maybe 20 – 25 show up every week, they all step into the gap. “We are a participant church, not a spectator church.”

Christine Fenn, a 26-year St. Paul’s member, also in discernment for diaconate, agreed. “We’re a working church.” About the affiliation, she says, “Sometimes, people feel like they don’t want their traditions to change, and we did lose some members when we blended. But we need to be more open. We need to put the love back in ‘love thy neighbor.’”

The willingness to blend and to accept diverse worship, polity and other expressions, exemplifies “the real world, and the eyes of God, where there are no divisions,” Jew said. 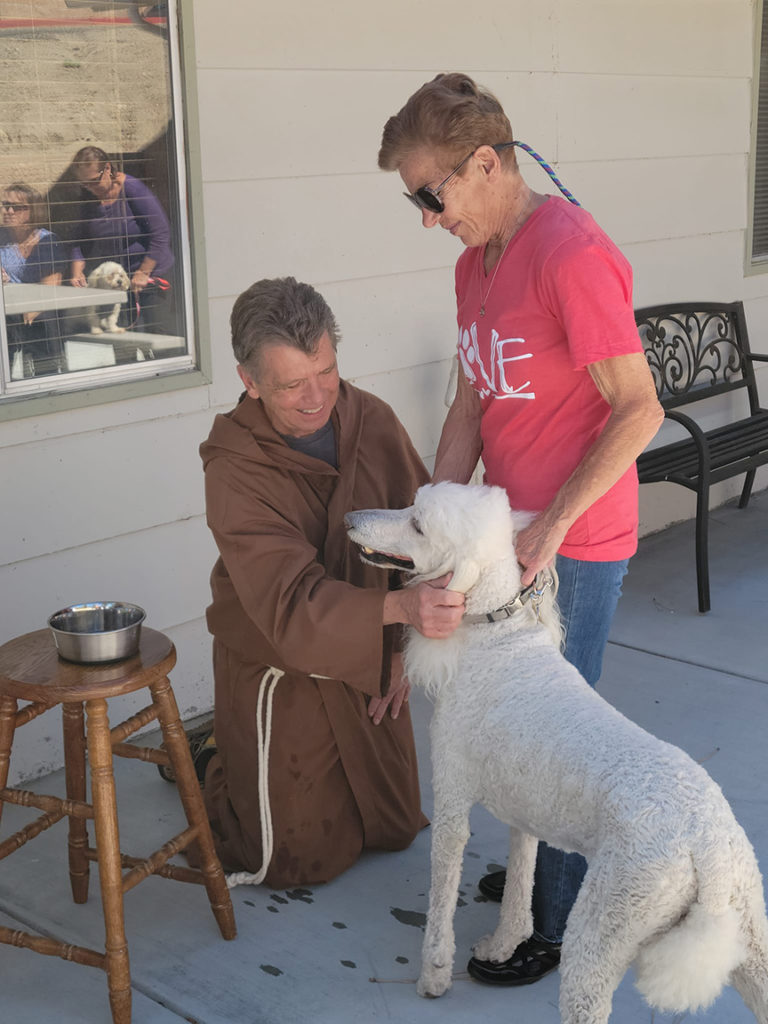 Lutheran-Episcopal bonds are informal, but strong in Big Bear

In Big Bear Lake, the Rev. Stuart Swann believes St. Columba’s Episcopal and Spirit of Peace Lutheran churches have a few more years before entering a formal agreement but they are already worshipping together, and the timing couldn’t have been better.

“We were in exile like everyone else during the pandemic, away from the building, but we were also building a brand-new sanctuary, when we were approached by the Lutherans to see if we would be interested in them joining us,” Swann said. “Both bishops agreed, and we spent most of 2020 doing Saturday afternoon partnership meetings. Our first worship service together was the first Sunday after Easter in 2021.”

Canon Martha Estes joined some of those meetings with representatives from both denominations and has led informational sessions about The Episcopal Church, relying on “Those Episkopols,” by Dennis Maynard. “So many of us have felt there was definitely the hand of God in this partnership,” she said. “The Lutherans had lost their pastor and didn’t have a place to go when they approached St. Columba’s. We welcomed them with open arms.”

Swann said financial identities are still being decided. “We keep separate budgets and bookkeeping and accounts,” although as part of the partnership, Spirit of Peace paid off the $75,000 balance remaining on the $400,000 mortgage for the new sanctuary.

“It’s been a lot of work,” Swann said. ‘It’s been pleasant work and they are pleasant people, but one of the biggest challenges is a few Episcopalians have felt threatened by the possibility of losing their Episcopal identity.”

Drew Platkos, a Spirit of Peace member, said he has been tapped to offer remarks at an Oct. 22 stewardship potluck gathering. “Potlucks are very Lutheran things to do, to bring a hot dish to pass. We’re going to be light-hearted about it, make it more of a party.

“We figured out early on that there really weren’t that many differences, but tons of similarities between us,” he said. ‘We are experimenting with a joint council as a governing board and have retained our Lutheran and Episcopal identities. It just feels normal.” 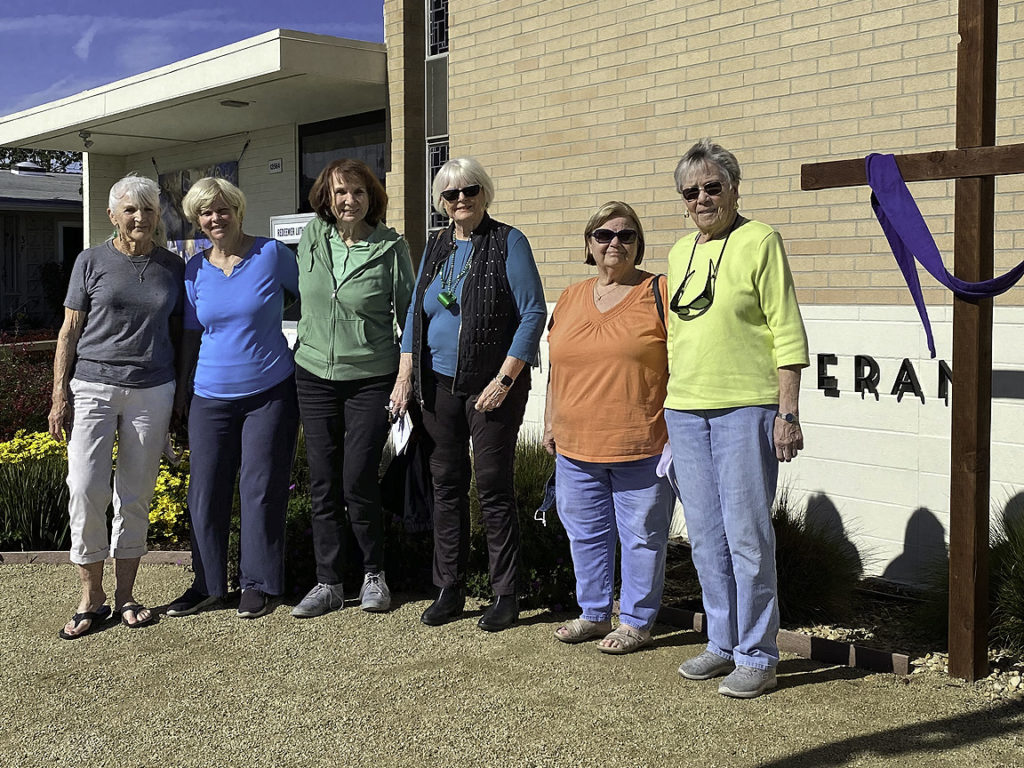 Affiliation agreement is near in Seal Beach

Anne Walshe, bishop’s warden at St. Theodore of Canterbury Episcopal Church in Seal Beach, said the congregation began worshipping with nearby Redeemer Lutheran about three years ago and is edging closer to an affiliation agreement.

St. Theodore’s had been meeting at a Leisure World clubhouse since its 1962 inception but lost that space and fortunately was welcomed by Redeemer. Initially the churches worshipped separately, and gradually began meeting together, Walshe said.

“When the Lutheran pastor opened his arms to us, we just felt so welcomed; we were absolutely grateful to go,” she said. “Some of the older members were thrilled to be back in a church, because we had been meeting in a clubhouse. They were happy to have a pew again to sit on with a nice cushion.” The church has been served by a rotating series of priests and, more currently, an interim supply priest.

Walshe is hoping to jump-start the affiliation agreement, which has been in limbo since the recent retirement of former Lutheran Pacifica Synod Bishop Andrew Taylor.

Taylor’s successor, Bishop David Nagler, was consecrated Oct. 16, at St. Paul’s Episcopal Cathedral in San Diego, an event attended by both Tororeiy and Hackbarth of the Barstow congregation.

Tororeiy agreed. “It comes down to caring for people and being a pastor and just being in a faith community that is loving and caring and willing to work together and to be Christ’s body in this community.”