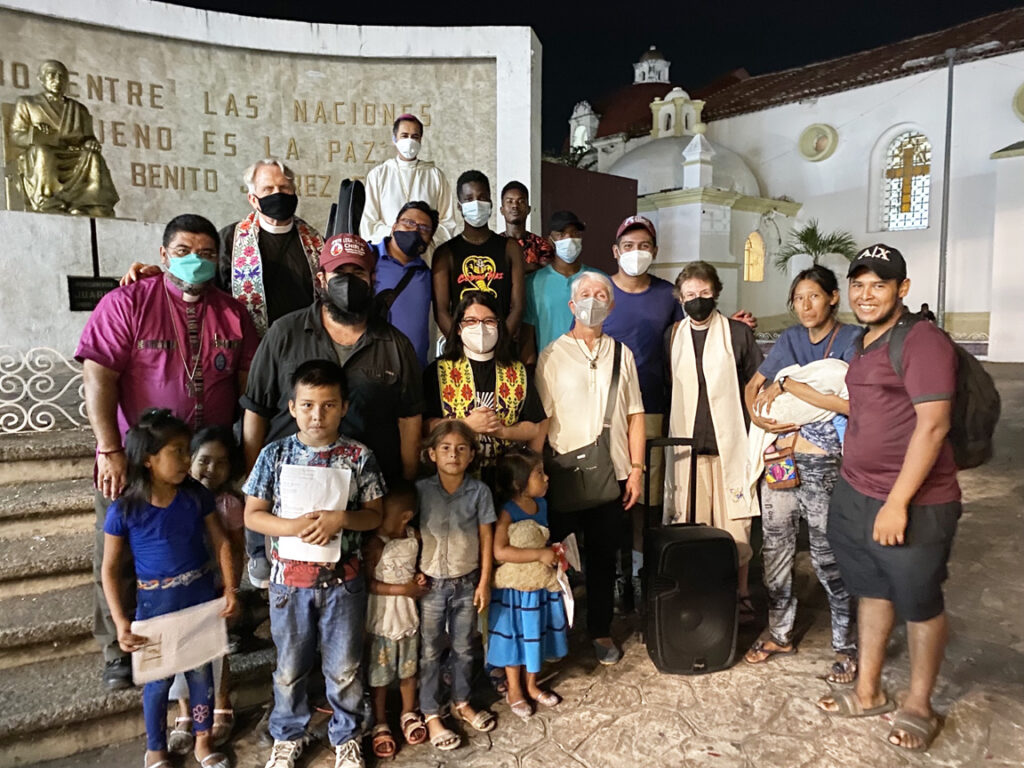 In Tapachula, Mexico, members of the Diocese of Los Angeles’ border ministries committee and local church leaders pose with some of the bystanders who joined them for a vigil in support of migrants. Photo courtesy of Norma Guerra

For the Rev. Norma Guerra and other members of the border ministries committee of the Diocese of Los Angeles, a Jan. 17 – 22 trip along “the migrant road,” from Guatemala City to Tapachula, Mexico, was both heartbreaking and hopeful.

“It was really bittersweet, very moving for me to be there, like my two worlds were coming together, my ties to my family and the church there, and of course, my love for and concern about immigrants and the church here,” said Guerra, diocesan associate for formation and transition ministry. She is the daughter of the Rt. Rev. Armando Guerra Soria, retired bishop of Guatemala and former primate of Central America.

“I’ve served in churches where we have immigrants, and I’ve heard their stories. So, it was wonderful to go and to see how organizations and the churches are wanting to help,” said Guerra, who came to the U.S. as a student, married, and later became a citizen. Yet, “it was very hard to hear about the treatment the people have received … like they are disposable.”

The migrant road is the nearly 300-mile journey many take, usually on foot, from Guatemala to Tapachula, Mexico, where they are stuck, sometimes for years, under Mexican immigration enforcement that has ramped up from pressure by the United States.

Following migrants’ journeys by bus, witnessing plazas where they sleep at night, the soccer stadium in Tapachula where many live, was a trip objective. Migrants are from South America, Central America, Africa, Haiti; some are LGBTQ+ and avoiding persecution. Others are forced to flee, to escape violence, environmental disaster, extreme poverty, racism, political oppression. “They risk a lot in fleeing their countries,” said the Rev. Pat O’Reilly, vicar of St. George’s Hawthorne and a border ministries committee member. 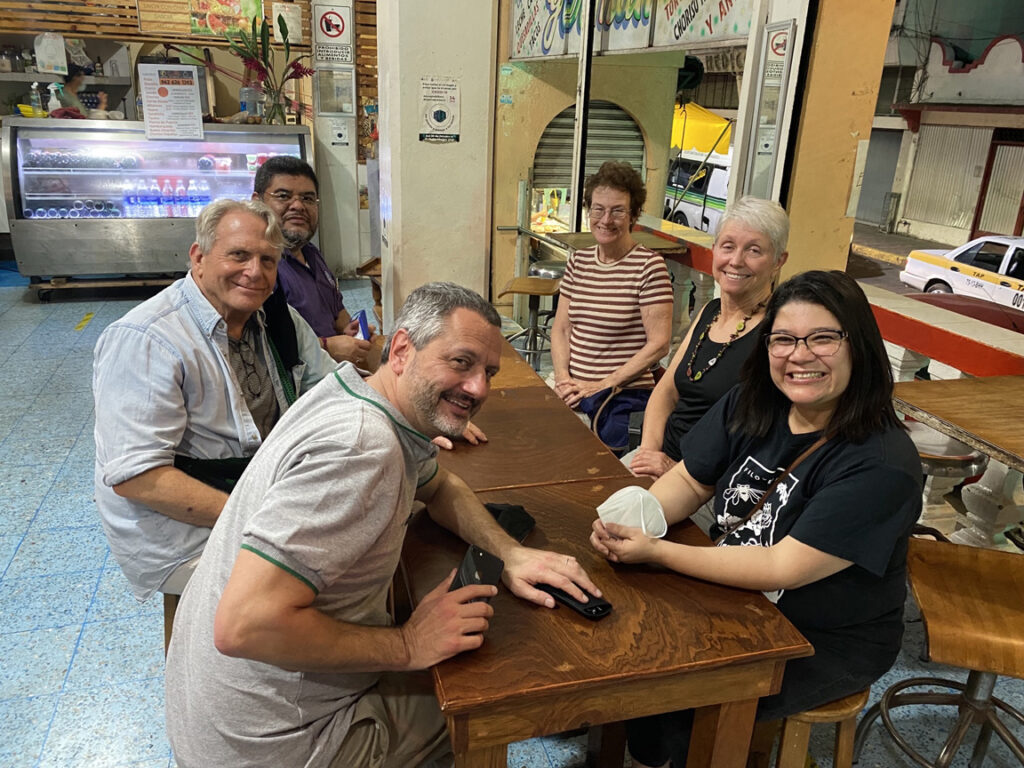 “They are desperate,” said O’Reilly. “One woman said, ‘I can die at home, and I can die on the route, so I’d rather take my chances on the route.’ They are running for their lives. They are not just saying ‘we want to go to America.’ They are saying ‘we cannot live where we would prefer to live, in our own country. We have to flee.’”

One woman, “was emaciated, absolutely emaciated, with her husband and three children and she had a baby in her arms. Someone asked, ‘What’s your baby’s name?’ She hadn’t named the baby because they thought the baby might not make it.”

Guerra met a woman from Cuba “who looked like she was having a hard time. I approached her, thinking maybe I can pray with her,” Guerra recalled. “Just the night before, she was having dinner with her husband, and she went to get some tortillas. The authorities came and took her husband. They had legal documents, but she had the original and because her husband only had a copy, they were accusing him of faking the documents and they took him to prison.”

The group also met Reuben, a young Haitian man who “was telling us about the discrimination, the racism he endured” who had managed to earn money while living on the street so he could attend university classes in Chile. But when he finally received a work authorization and a certificate in tourism, “no one would hire him because he is Black,” said Guerra.

“But he is amazing. He is helping people,” she said. “He speaks Spanish and Haitian Kreyol, so he can be the connection. It’s amazing to see him work, he and others, how they help people in the street. They just approach people and go, one by one, to see if they can help.”

It was the second such L.A. diocese-sponsored trip for O’Reilly and for Troy Elder, former Los Angeles Bishop’s Legate for Global Partnership, who now serves as migration missioner for the Diocese of San Diego. The trip had been postponed twice because of the pandemic.

Elder, a human rights attorney, said the trip was part pilgrimage, part accompaniment, fact-finding, witnessing and making connections to strengthen ties between U.S. and Mexico churches and partners. He also hopes to create awareness among congregations of the need for local support and regional approaches to changing immigration policy.

Hosted by Bishop Silvestre Romero, the group joined local Guatemalan clergy for bible study and to learn how their churches were affected by the migration, and visited Casa del Migrante, part of a network of ministries in cities in 32 countries.

“We learned that hours earlier a caravan of migrants had left Guatemala City for points north,” Elder told The Episcopal News. “We asked the shelter psychologist if the migrants were aware of the many dangers posed by the journey, including extortion and violence at the hands of cartels, gangs, and Mexican police, extreme conditions of heat and cold, and pervasive anti-migrant sentiment along the way.”

The psychologist explained that what they were fleeing “far overshadowed the perils of the road,” Elder said.

The group also met with U.S. Ambassador to Guatemala William Popp, “who seemed most at ease when discussing long-term economic development in Guatemala as the solution to the woes of forced migration. When confronted with the urgency presented by the human suffering along the migrant road, however, he did seem supportive of expanding existing visas to enable legal migration,” Elder said.

“When prompted, he did seem to acknowledge a role for communities of faith in expanding access to such avenues.”

Under both Republican and Democratic administrations, a “Remain in Mexico” U.S. policy has pushed the Mexican government to keep migrants from crossing the border. The policy has resulted in a “de-facto open-air prison city,” in Tapachula, Mexico, nearly 2,500 miles from the U.S.-Mexico border, “this small country town in the jungle, not far from the Guatemalan border that itself does not have a history of a lot of migration.”
Elder said.

Both the Trump-era “Remain in Mexico” and Migrant Protection Protocol policies were dismantled by Biden, but resumed after a Texas judge ordered them revived.

“One of the most frustrating and challenging things about working at the border now is this sort of enduring tenacity of these two policies, the Migrant Protection Protocols,” which, regardless of country of origin, returns refugees to Mexico while their U.S. removal proceedings are pending, Elder said.

On Oct. 29, 2021, Secretary of Homeland Security Alejandro Mayorkas issued a new memo terminating MPP, to be implemented once the former ruling is vacated.

“Now we have people waiting for months and years in some of the most dangerous cities in the hemisphere, along the U.S.-Mexico border, waiting for asylum hearings. It’s a form of detention, and the human suffering it has caused is palpable,” Elder said.

Committee members hope the trip will help raise awareness of the plight of migrants and help launch a robust Anglican-Episcopal alliance around migration, says Grace Dyrness, a member of All Saints, Pasadena who was born in Costa Rica and has been involved in the sanctuary movement for nearly four decades.

“We were concerned about human rights violations at the southern border,” she said. “So, we decided this was a way to put our country on notice. People are being violated with our money that we’re giving to Mexico, to keep people down south rather than go through Mexico.” 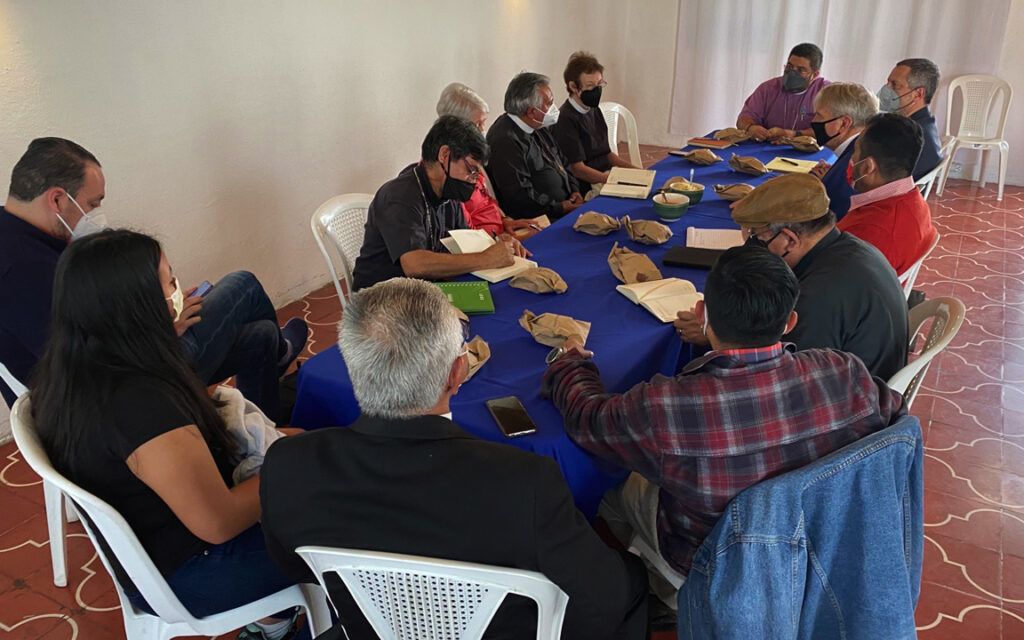 The Los Angeles group meets with clergy, lay leaders and seminarians of the Anglican Diocese of Guatemala, of which their host, is bishop diocesan. Photo: Norma Guerra

In Tapachula there were more visits to agencies like the Coalition for Humane Immigrant Rights, or CHIRLA, based in Los Angeles, and a medical clinic serving migrants, as well as a prayer vigil in the town’s central square. The group was also joined by the Rt. Rev. Julio Cesar Martin, bishop of the Southeast Diocese of Mexico, which encompasses Tapachula.

Dyrness said she hopes to raise awareness among churches and to push for regional strategies because, she said, “You can’t deal with it just in our context in Los Angeles, which is so much impacted by the context in Mexico and all along the way. We need to work together to be more strategic in advocacy and service.”

The Rev. Tom Carey, rector of Epiphany, Los Angeles, said he was inspired to take the trip “to see with my own eyes and hear from people down there, who are doing things to help. We had a wonderful time with Guatemalan Anglican clergy and Bishop Romero. That is a relationship we’re going to build on very much.”

A young man from Honduras who was working with the Los Angeles-based Coalition for Humane Immigrant Rights or CHIRLA was, like many others the group encountered in Guatemala and Mexico, “a refugee, but was working alongside CHIRLA to help others,” Carey said. “My question is, why wouldn’t we want people like this in our country? It seems so foolish.”

He added: “Terrible things are happening. On both the local and diocesan level I would like for people to no longer be silent about this. We want justice for refugees, for people who want asylum and have a good case. They are backed by international law which we have been breaking for a long time, and the amount of suffering is huge.”

Elder said the committee is grateful for the support of Bishop Diocesan John Harvey Taylor and although Los Angeles is not technically a border diocese, it is, he says, “border-adjacent. It is the destination for so many who reach the terminus in San Diego. A lot go on to greater Los Angeles. This issue is not going to go away.”

He hopes to create a robust transnational Anglican and Episcopal Mexican and Central American collaboration on migration issues and “to explore ways in which the church can facilitate legal migration, so people don’t have to take the migrant road and separate from their children.” 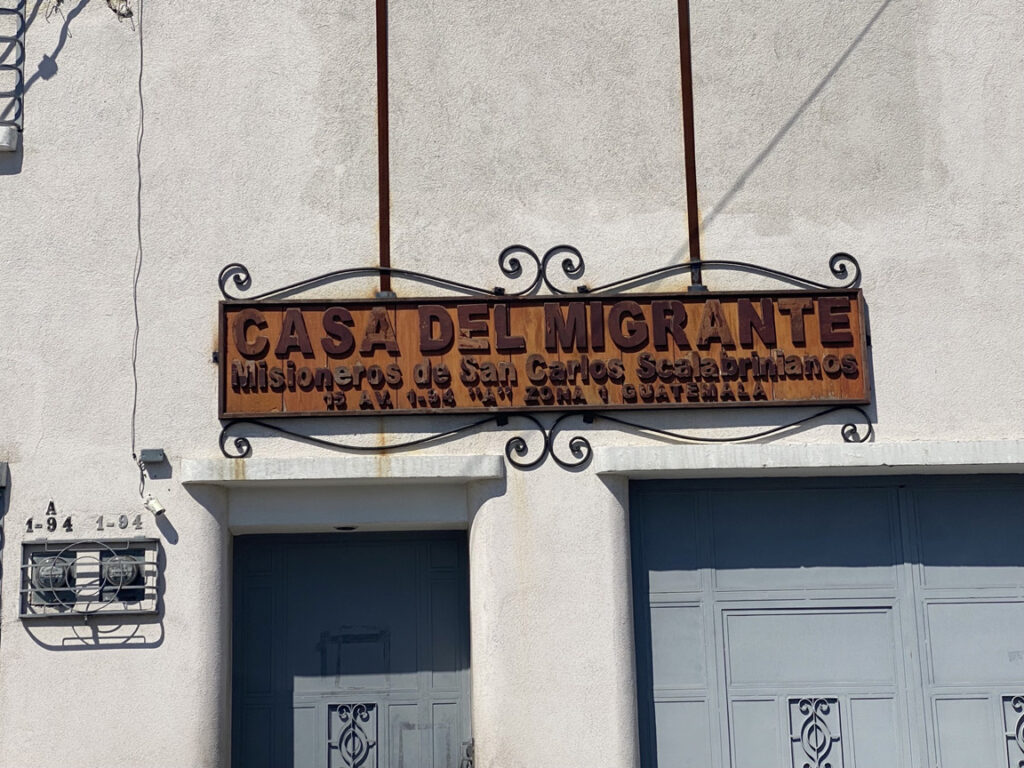 The group visited Casa del Migrante in Guatemala City. The shelter, operated by the Scalabrinians, an international religious order serving migrants and refugees, is part of a network of ministries in 32 countries. Photo: Norma Guerra

Citing the L.A. diocese’s former Los Acompañeros ministry, which paired congregational members with unaccompanied minors, he added: “The L.A. diocese has a history of progressive action. We brainstormed that maybe the church could in some way help provide application support” to help facilitate accompaniment visas. Or, he said, the church could help migrants with “filling out applications using the existing pathways, limited as they are, to promote and to encourage people who are going on the migrant road.”

For Guerra, raising awareness and empathy for migrants is key because, “they are willing to risk everything to have a chance for a better life. Sometimes, we dehumanize them. But they are people with dreams and many of them are willing to do anything it takes to realize them. They’re not here to take jobs. They’re not here to be a burden for society. Actually, they take the burden on themselves many times.

“So, humanize them. See the face of Christ in them. We were reminded many times during our trip that, really, we are the ones who created borders,” she said. “There are no borders in the eyes of God.”