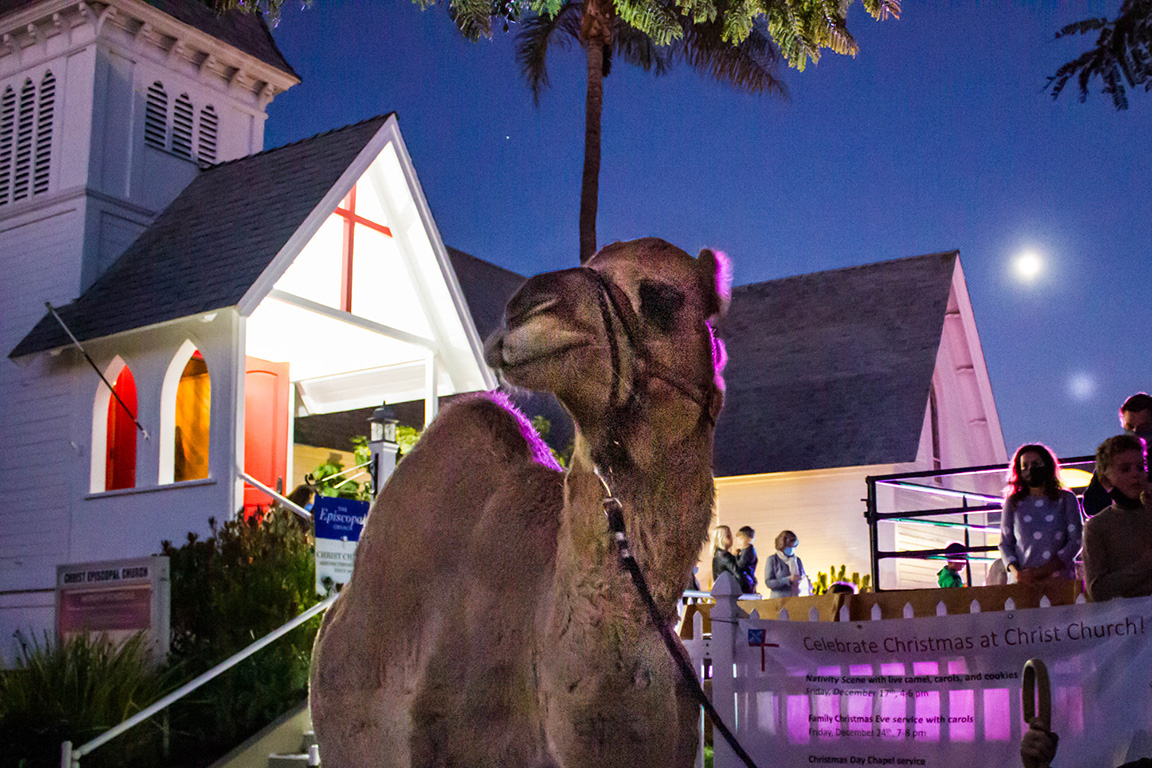 A haughty-looking camel is part of the scene at the 2021 Living Nativity at Christ Church, Redondo Beach. Courtesy photo

[The Episcopal News] – From bicultural Posadas to living nativities, La Virgen de Guadalupe parades and progressive book studies, there’s a collaborative, community spirit of celebration in the Diocese of Los Angeles this Advent.

The entire diocesan community is invited to attend a Dec. 10 “La Gran Posada,” co-hosted by the Program Group on Latino/Hispanic Ministries and The Gathering: A Space for Asian Pacific American Spirituality, according to the Rev. Carlos Ruvalcaba, who serves at St. Stephen’s Church, Hollywood.

Las Posadas, or “The Inns,” commemorates the journey that Joseph and Mary made from Nazareth to Bethlehem in search of a safe refuge where Mary could give birth to the baby Jesus, said Ruvalcaba, chair of the Program Group on Latino/Hispanic ministries. 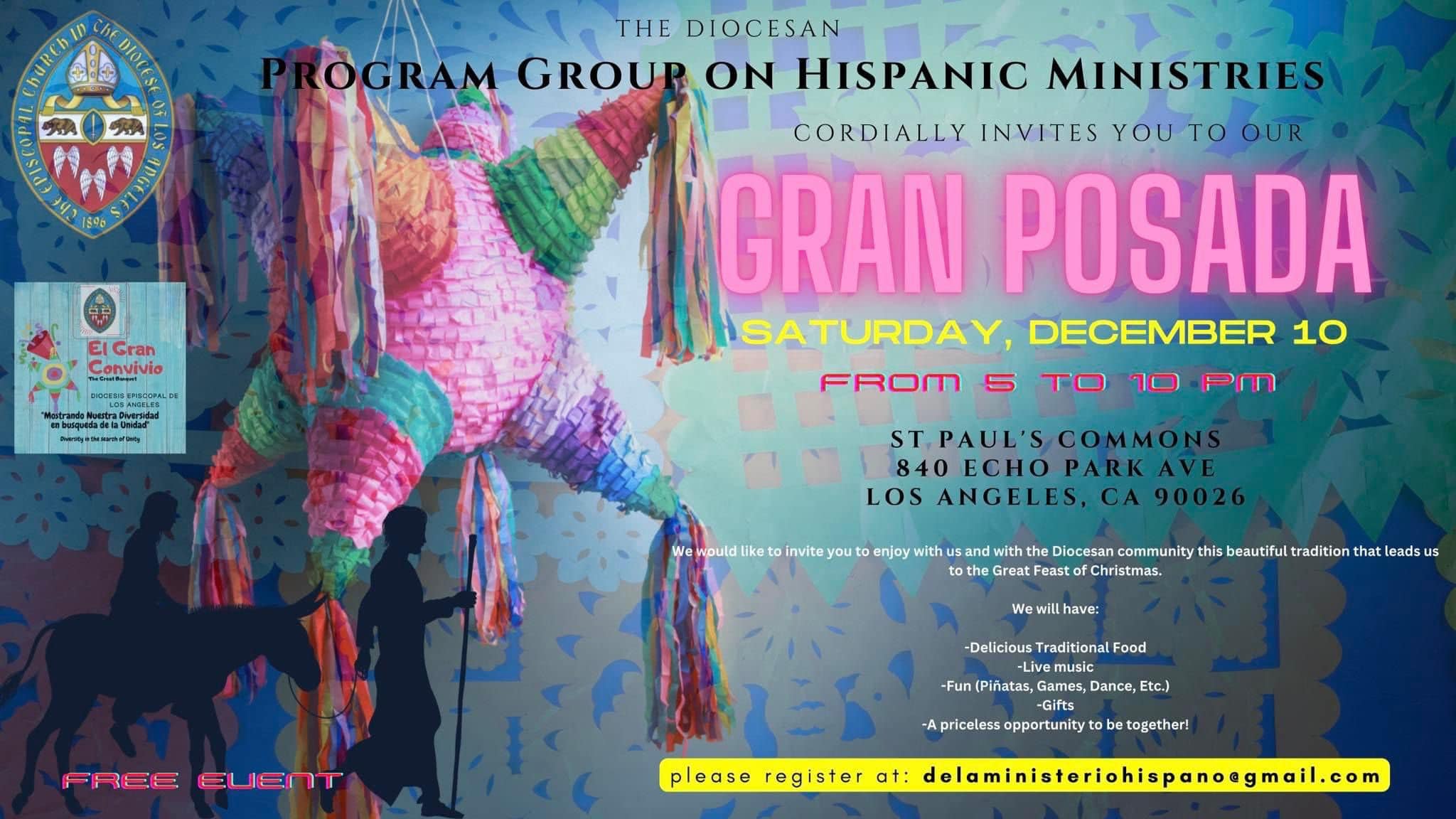 A flyer for the Gran Posada that will be held on Dec. 10 at St. Paul’s Commons. (Right-click image for a larger version, or to download.)

“It’s such a beautiful celebration. This is one of the most important traditions of people in Mexico and other countries in Latin America,” he said in a video conversation  posted on YouTube. “I remember being aware of this wonderful tradition when I was a kid,” in his Guadalajara, Mexico, hometown. “It’s wonderful to see communities get together, especially since The Gathering is going to join us in hosting,” added Ruvalcaba. “There is a great opportunity to be in community with one another.”

The video conversation, “Why Las Posadas is Important to the AAPI Community,” also featured Sandra Martinez, a St. Paul’s, Pomona, parishioner and Latino ministries program group member, as well as The Gathering leader the Rev. Peter Huang, and Erika Bertling, an intercultural educator, who facilitated the conversation.

“We are having this conversation among friends to learn more about Las Posadas, and how it may be relevant to the stories in the hearts of the AAPI Christian community” – in particular, the stories of immigrants coming to this country, Huang said.

Although Posadas typically extend nine days, from Dec. 16 through Christmas Eve, the Saturday, Dec. 10 festivities are planned from 5 p.m. to 8 p.m. The evening celebration will include a special liturgy, music, traditional Mexican tamales, posole, pan dulce, agua fresca and ponche, a hot fruit drink, as well as Indonesian turmeric rice, and chicken and vegetables in peanut sauce.

During Posadas, “People in the neighborhood get together and share their home, one person each night, with strangers,” Ruvalcaba said. “You probably don’t even know who is coming to your house, but it doesn’t matter, because you open your hearts to them.”

Martinez, who made the solo journey from El Salvador to Los Angeles as a teenager to escape local violence, recalled Posadas “as a gathering of strangers and loved ones, families, and friends,” she said.

“Everybody is welcoming … singing in the candlelight as they go to each house, knocking on doors and asking to come in. It was amazing, just singing along and seeing everyone and everybody, just feeling the love. And all the food!” 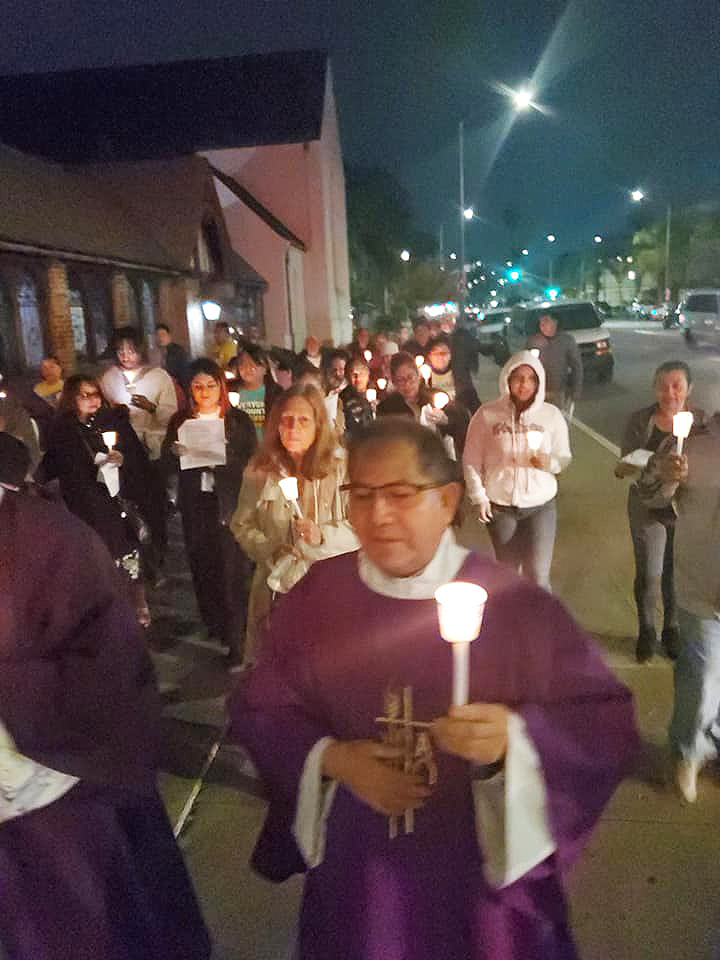 In Long Beach, St. Luke’s Church members will take the image of La Virgen de Guadalupe to their neighbors, singing with mariachis trumpeting as they process around the church and the block in celebration of Mary, “the mother of God, who embraces all of us and especially the immigrant,” according to the Rev. Antonio Gallardo.

“The celebration this year is in the context of a new set of statements about the vision, mission, and values of the church approved by the St. Luke’s vestry,” Gallardo said. The vision: “We are a beloved community that loves and lives like Jesus, and that we are aiming to create mutual healing and transformation in the world … affirming everyone for who they are and promoting radical inclusion … in that context we’re celebrating Guadalupe.”

The Virgen “is all about radical inclusion,” Gallardo added. “She saw the dignity and value that Juan Diego had, instead of choosing anyone else, she chose him … to carry on the good news.”

Although celebrating La Virgen stems from a sighting of her Dec. 16, 1531, in Tepeyac, near what is now Mexico City, she has become a universal symbol, Gallardo said.

According to tradition, the Virgin appeared to an Aztec farmer named Juan Diego and instructed him to ask the bishop to build a church at the site. However, the bishop balked at the request, requiring proof. When Diego returned to the site, he noticed roses growing there, unusual for that time of year.

Gathering the flowers in his cactus-cloth cloak, or tilma, he took them to the bishop as proof of the miraculous visitation. When he opened his tilma, the flowers fell out and the image of the Virgin was imprinted on the material. The bishop agreed to build the church. The image, still vibrant after nearly five centuries, is enshrined in a Mexico City basilica. 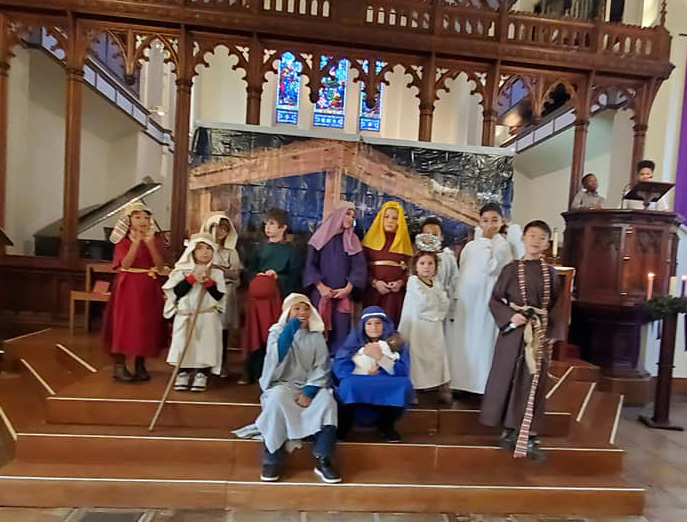 “She is not just a patroness of the entire Americas, she’s universal now, from Canada to Chile, where they speak French and English and French Creole and many native languages,” said Gallardo.

After the neighborhood procession, members will return for a worship service, followed by music and food, including about 300 tamales prepared the evening before, he said. “At the end of the service, there is an opportunity for people to come and bring flowers to the altar in the Virgin’s honor,” Gallardo said.

Similarly, the Very Rev. Melissa Campbell-Langell, rector of Todos los Santos/All Saints Church in Oxnard, said the congregation will celebrate a special mass on Sunday, Dec. 11 in honor of the Virgen. “We surround the Virgin with lights and flowers and celebrate the story.”

On Dec. 16, parishioners will take to neighboring city streets to re-enact Las Posadas. “We’re imagining we’re traveling with Mary and Joseph looking for room at the inn.

“We just do it the one day, and we go to different homes in the historic district, adjacent to our church,” she said. “It’s fun because that’s also Christmas Tree Lane. We walk through that area, and we usually visit a couple of houses of people in the neighborhood that we know and come back to the church for more food and festivities.” 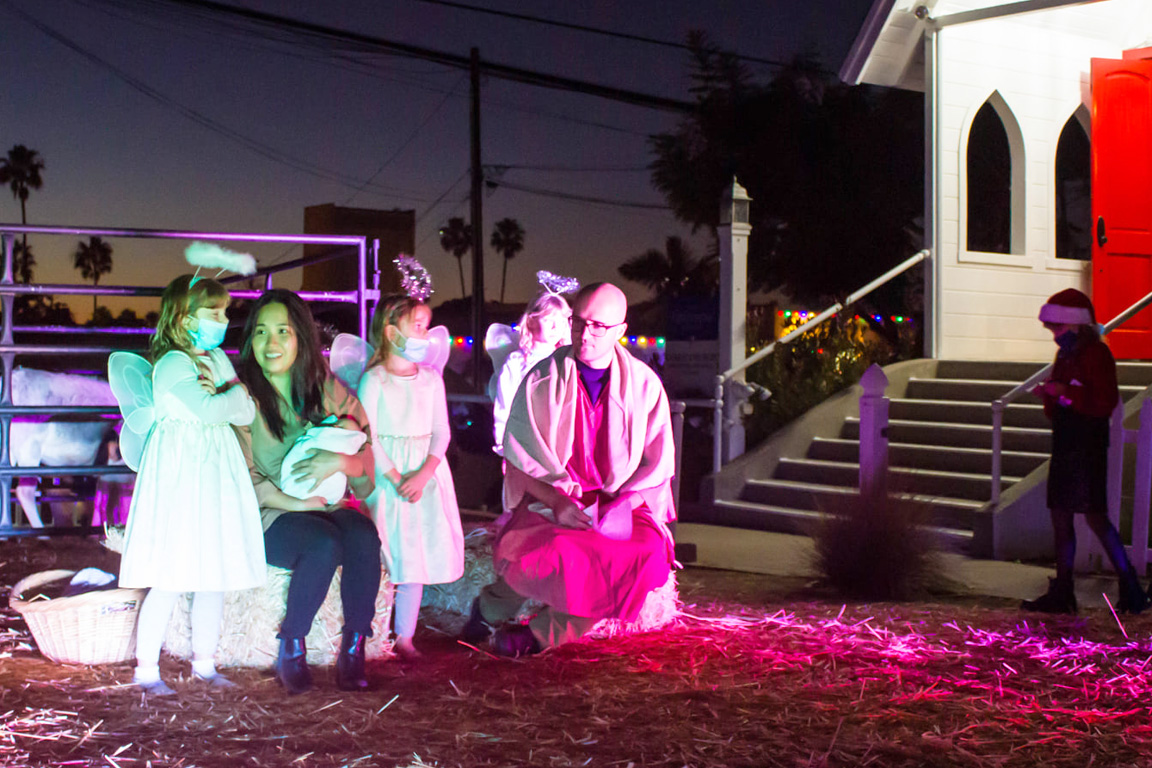 Redondo Beach: ‘a camel, donkey, cow and goat, oh my!’

For the second year, the mutual ministries of St. Andrew’s, Torrance, and Christ Church, Redondo Beach will make the nativity story a bit more real for their neighbors and community.

Youngsters of all ages are invited to come at 4 p.m. Sunday, Dec. 18, dressed as shepherds and angels, for a no-rehearsal Posada play, and visits with “a camel, a donkey, a cow and a goat,” said the Rev. Julie Beals, associate rector. 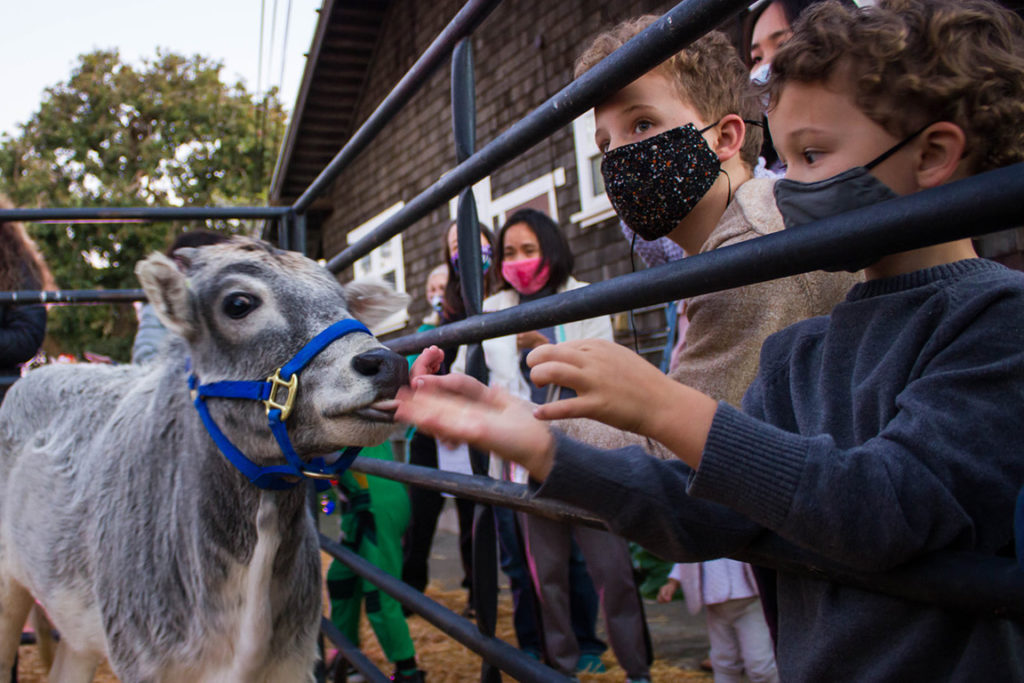 There will be a reprise of last year’s fun, when flyers were handed out at grocery stores and elsewhere, and which drew about 120 people from the community. “We knocked on some neighbors’ doors and re-enacted Mary and Joseph being turned away from the inn and stable,” Beals recalled.

The choir informally sings Christmas carols, with ‘Frosty the Snowman’ or other secular tunes thrown in here and there, she added.

The celebration seemed “a way to open up the church,” Beals said. “It’ll be lit up and look magical, and people can go into the sanctuary to pray. And we’ll have light refreshments in the parish hall.”

Many of the participants had never seen a camel or a donkey, before, she said, adding: “Everybody asks for rides. The answer is no. They can take photos, though.” 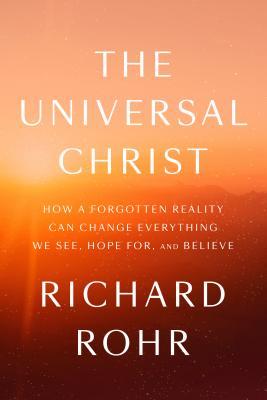 Several Deanery 6 Inland Empire congregations have undertaken a collective book study in Advent, of The Universal Christ, How a Forgotten Reality Can Change Everything We See, Hope For and Believe, by Richard Rohr, a Franciscan priest and founder of the Center for Action and Contemplation in Albuquerque, New Mexico.

About 30 people gathered at Christ Church, Ontario on Wednesday, Nov. 30, for the introductory session, co-led by the Rev. Jessie Smith, rector of St. Ambrose, Claremont, and the Rev. Liz Kronenberg, vicar of St. John’s, La Verne.

It wasn’t the first time the churches have banded together for community and enrichment, but it was the first such in-person gathering, Smith said. Participants sampled a variety of soups, some flavored with herbs from the Ontario church’s “Rebecca’s Garden.”

The garden, dedicated in memory of former organist Rebecca Rollins, “is the outward expression of a larger vision of hospitality and compassion which animates the Center for Ecological Spirituality, located as well on the premises,” according to the website.

Rohr’s book, published in 2019, invites readers to distinguish between the historical Jesus and the savior Christ, to better understand God all around them, in everything. Kronenberg summarized the first chapter, which frames the book via the retelling of a mystical vision of a friend, 20th century mystic Caryll Houselander. While on a crowded underground subway train, she suddenly, “could see Christ in every single person …. she could see Christ living in them, dying in them, rejoicing in them, sorrowing in them.

“Literally, seeing the life of Christ lived out within each person made her feel this great synthesis with all people from all times. And she says as a sort of culmination of this, that Christ is everywhere. In him, every kind of life has a meaning and has an influence on every other kind of life.”

Kronenberg called upon the group to discuss, “Who is this Christ that Caryll Houselander saw permeating and radiating from all of her fellow passengers? Christ for her was clearly not only Jesus of Nazareth, but something much more immense, even cosmic in significance. But how that is so? And why it matters is the subject of this book.”

“It’s exciting that we’re taking the next step in being community to one another, outside of our own our own parish, church congregation circles,” Smith said.

The Gathering’s Huang said such collaborations are a way “to engage our shared experiences, as well as celebrate our unique differences, too. And it’s not just joining the diocesan Posada, but having a chance to have a conversation around issues related to immigration and community rituals and an opportunity to learn about each other’s cultural stories.

“I just want to experience it, the food, the festivities, joining that spirit… the wonderful parts of the Posada. They expect strangers to be there and to participate and so we will show up as strangers and leave as friends.”