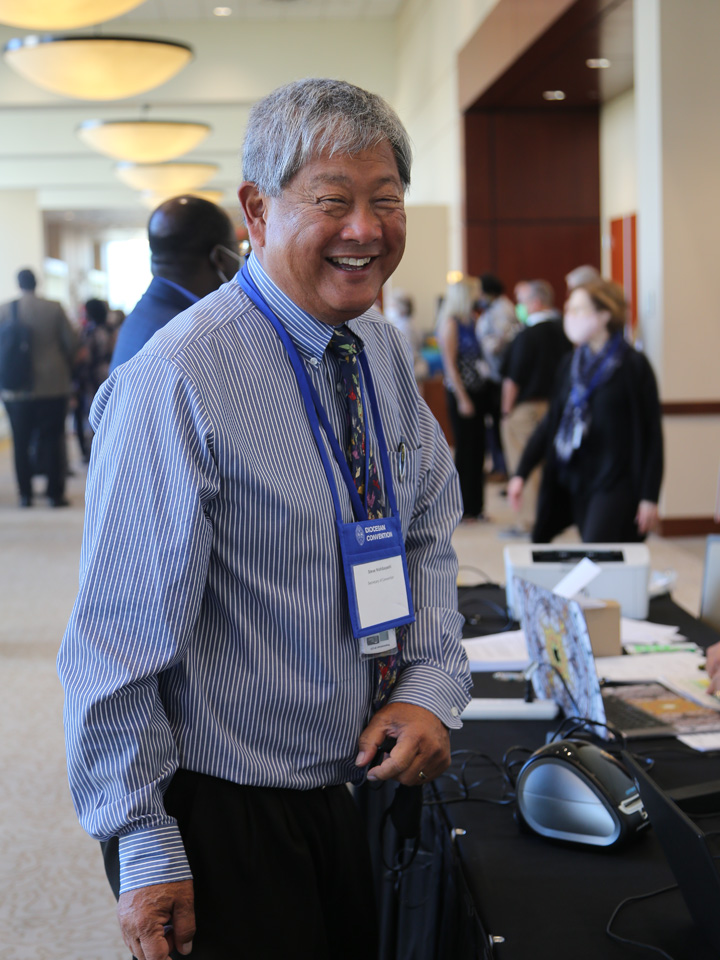 [The Episcopal News] It should come as no surprise to anyone who knows Canon “Dr. Steve” Nishibayashi that a wall in the Secretary of Convention’s office at St. Paul’s Commons is painted Dodger blue.

A native Angeleno and retired pediatrician turned diocesan Secretary of Convention, Nishibayashi’s love of all things Dodgers – and The Episcopal Church far and wide – is well-documented.

He grew up at St. Mary’s, Mariposa, the diocese’s historically Japanese American congregation which his grandparents helped to found, where his parents met and married and where he raised his children and sang in the choir. He credits the tight-knit community with instilling within him a sense of cultural identity and connection and love of church and service.

“We went to church faithfully on Sundays from Rosemead when there was no I-10 freeway. There were no Asians in Rosemead in those days. I was one of three Japanese boys in high school,” Nishibayashi told The Episcopal News in a recent interview.

In 1970, then-Bishop Francis Bloy appointed him a youth delegate to the General Convention in Houston, Texas – an appointment, he still believes, he was given through the influence of St. Mary’s legendary priest, the Rev. Canon John Yamazaki.

“It was a transformative, formative week for me, like a bomb that exploded in me. I got a lot out of that week, and it did commit me to the work of the church,” Nishibayashi recalled. A year later, he reported to the 76th annual meeting of the Diocese of Los Angeles, held at the Anaheim Convention Center, a 50-year anniversary noted by Bishop Diocesan John Harvey Taylor at the 2021 convention in Riverside.

“With Steve, so much comes together for the glory of God and the sake of God’s people – his rich family and personal history in our diocese, his gifts for leadership, his kindness, and his sheer brilliance,” Taylor said recently.

“His ministry as secretary of convention has been transformative, keeping us stitched together between our annual meetings and listening carefully to all stakeholders. Ask him how many days to the next convention, and he’ll tell you on the spot. Ask him what he’s doing at the churchwide level, on Executive Council and the presiding bishop’s search committee, and he’ll tell you if he can! It’s also my privilege to work with him almost daily in his capacity as vice chair of the Bloy House board.”

Canon to the Ordinary Melissa McCarthy agreed. “Dr. Steve has been a joy to work with. He is thoughtful and patient, creative and inquisitive, kind and generous. He has become an integral member of our staff and someone we all look up to. He’s a person who is always there for us, ready to support. I have particularly appreciated his support and his wisdom. He has a great sense of humor too. We always laugh!” 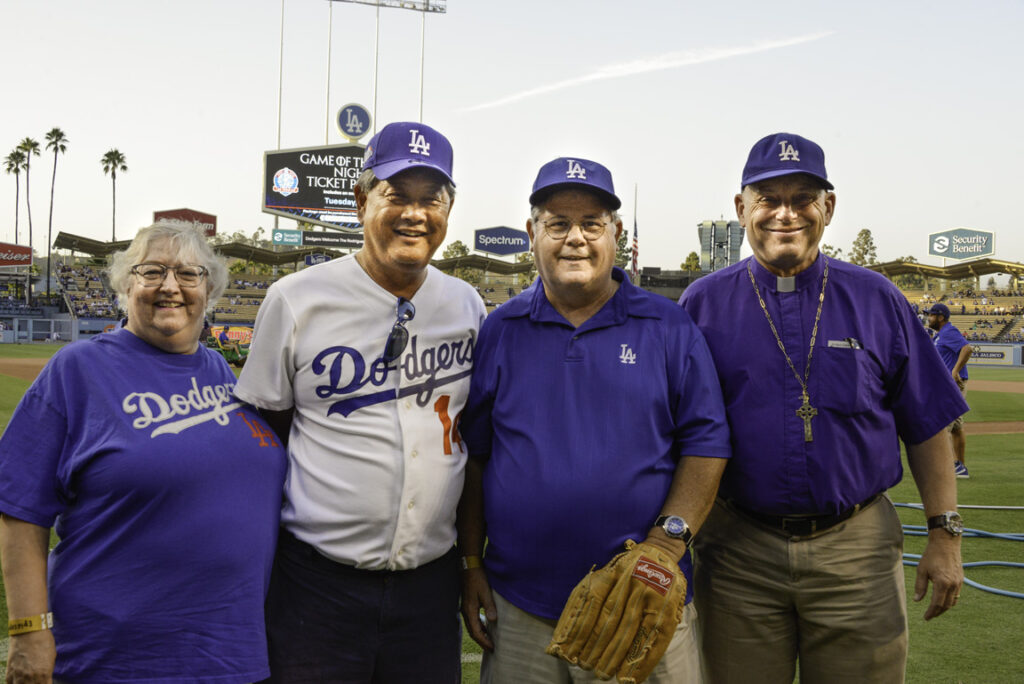 After a half-century of church engagement, Nishibayashi contends he’s received many more blessings than he’s offered, but others disagree.

The graduate of Occidental College wrestled with a call to the priesthood, but ultimately decided to attend UC San Francisco Medical School, “meanwhile continuing to be as active as my professional life would allow in the church.”

Those activities are too numerous to name. They include serving on the Commission on Ministry, the Standing Committee, the judicial ecclesiastical court, and as Bloy House board member and vice chair. After his 2017 retirement from his pediatric medical practice, Nishibayashi opted for even more service in the church.

He and his wife, Mary Dee Hacker, are active supporters of Hillsides and the Neighborhood Youth Association, both diocesan institutions that work with children and youth at risk. Hacker, now retired, served for many years as chief nursing officer at Children’s Hospital Los Angeles. The couple have two adult children; Mark (married to Pinky Lark Farnum) and Kathryn (married a year ago to Tim Reed). In April they welcomed their first grandchild, Mark and Pinky’s daughter, Poppy.

Nishibayashi currently serves as an elected member of Executive Council of The Episcopal Church, which carries out the programs and actions of General Convention and where his love of baseball and kids is also well-known. 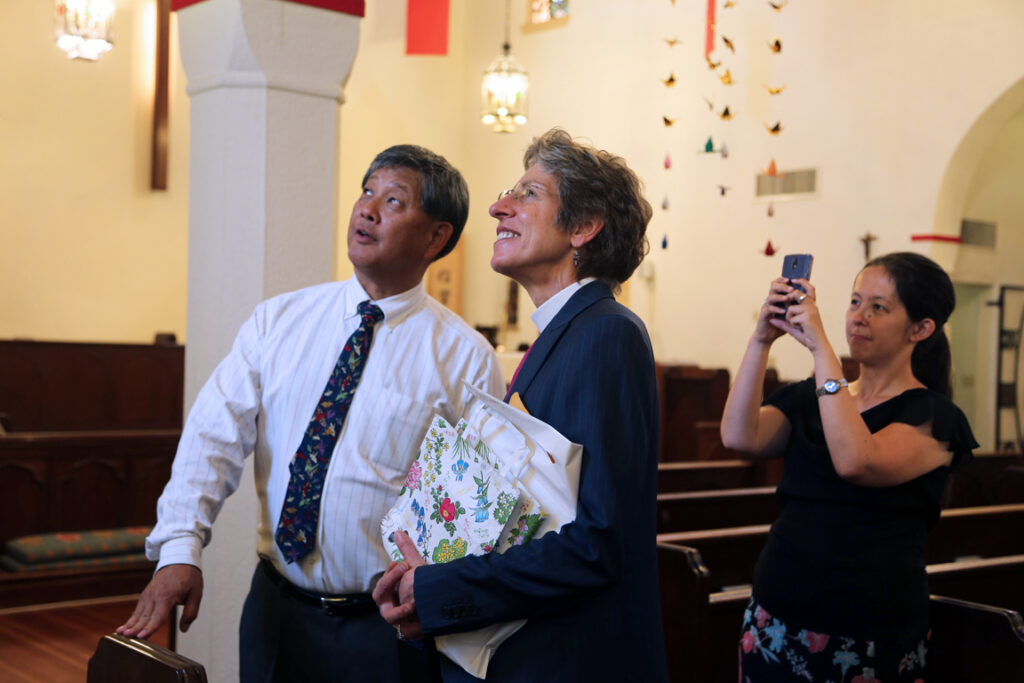 “Steve is the pediatrician every parent wants for their child,” the Rev. Gay Jennings, president of the House of Deputies, told The News in an email. “He’s wise, patient, and thoughtful. He always thinks before speaking, and people listen to him.

“Steve has been a significant member of Executive Council and its Executive Committee, and his peers seek him out for his wisdom and counsel. He’s respectful and a good listener, and he clearly loves the Episcopal Church,” said Jennings. “Except for his questionable taste in baseball teams, he is the ideal Episcopal Church leader. It has been a privilege to serve with him.”

Retired Episcopal News Service editor the Rev. Mary Frances Schjonberg first met Nishibayashi 20 years ago, when both served as board members of the Church Divinity School of the Pacific. The seminary has endowed a systematics theology chair in honor of Steve’s uncle, Dr. Shunji Nishibayashi, a retired professor.

Schjonberg and Nishibayashi both currently serve as members of the presiding bishop’s nominating committee – an awesome task, he says. “The question is, how do you follow Michael Curry?”

Recalling “what a great moment it was for The Episcopal Church when they announced [Curry] had been elected,” Nishibayashi, who is vice-chair of the committee, said, “We [the committee] are asking, what does the church need going forward? Because nobody can be, nor should they try to be Michael Curry.” 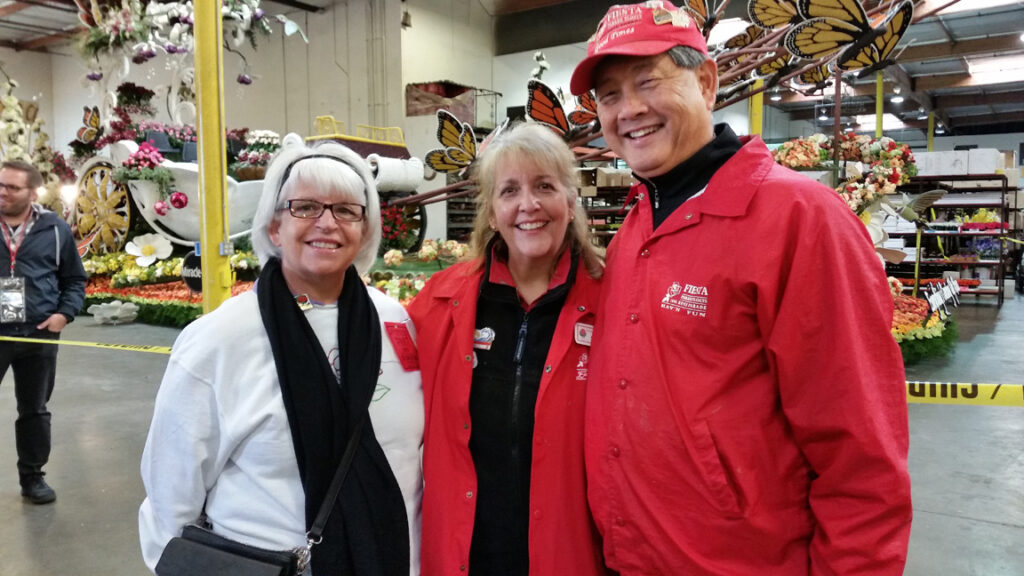 Linda Hughes, Canon Martha Estes and Nishibayashi meet at Fiesta Floats in the last days of 2016 as floats are completed for the 2017 Tournament of Roses Parade. Nishibayashi has volunteered for many years as a Rose Parade float decorator at Fiesta, which is owned by Estes’ family. File photo

“I have been impressed with his low-key and very effective leadership,” Schjonberg said. “Through his years of service, he has gained a deep knowledge of the church and its polity. Steve seems to me to epitomize all that The Episcopal Church hopes for in our leaders, lay or ordained.”

And then there’s the matter of his “Dodgers-themed Hawaiian shirts – or are they Hawaiian-themed Dodger shirts? – [which] never cease to make me smile,” she said.

Lou Glosson, also an Executive Council member, recalled Steve completing his “baseball bucket list – visiting all the major league baseball stadiums, although he says he has to double back to where new stadiums have been built.” A highlight for Nishibayashi was catching the ceremonial first pitch lobbed by the Rev. Canon Greg Larkin on the 25th annual Episcopal Night at Dodger Dodger Stadium in 2018.

Nishibayashi has “always been a leader, someone you can confide in,” Glosson added. “He’s somebody who always serves others, has accomplished a lot, and yet is a very humble person.”

When the Very Rev. Canon Gary Hall, Bloy House interim dean, surprised Nishibayashi with the “Going the Extra Mile Award” at the theological school’s May 14 commencement this year, “Steve seemed shocked,” he recalled. “Steve plays the organ and piano, and in addition to everything else he’s doing, he volunteered to be our chapel pianist on Saturdays this year.”

As the board’s vice chair, Nishibayashi “performs most of the day-to-day functions of the chair and has been doing that job for 15 years or so,” Hall added. “As in the many volunteer roles he occupies in the church, Steve provides leadership that is thoughtful, energetic, and committed. He loves Bloy House, its students, and its graduates, and he works tirelessly to support both the school and their ministries.”

He has also “been an integral part of reimagining a future Bloy House, chairing the search committee that called me as interim and the one that is working to find the next leader,” Hall said. 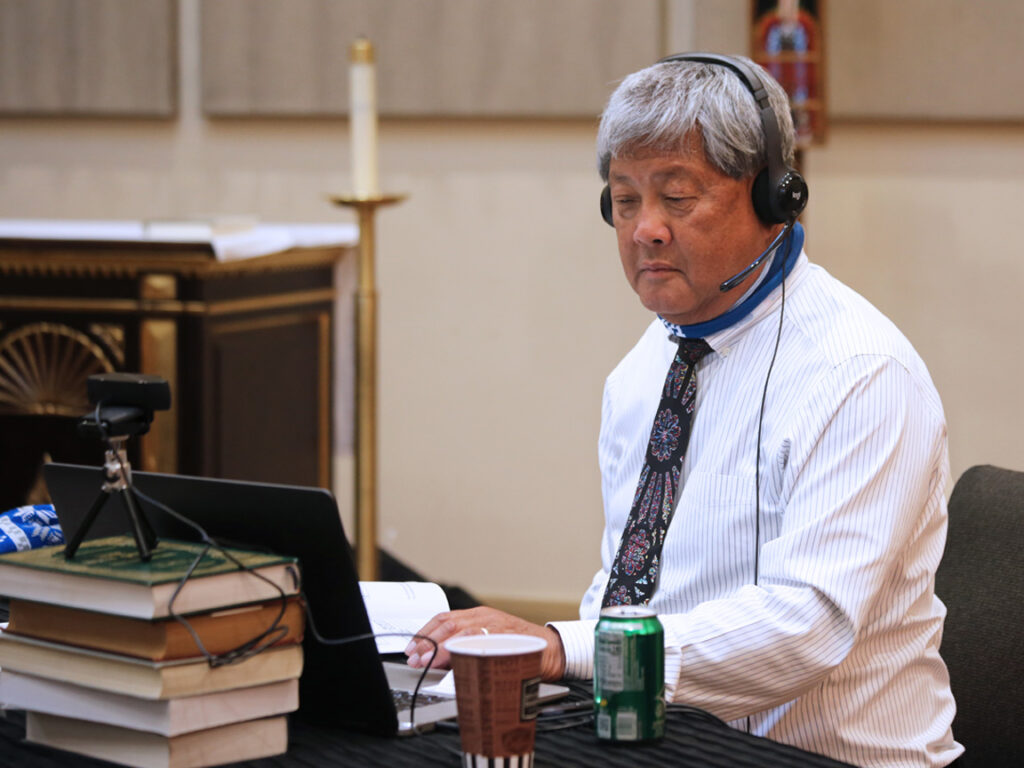 Secretary of Convention Nishibayashi tends to business at St. Paul’s Commons during the first – and so far only – fully online convention of the Diocese of Los Angeles, held in November 2020 during the coronavirus pandemic. Photo: Janet Kawamoto

Marisol Barrios, former communication director for Hillsides, the Episcopal Church-founded agency for at-risk children, recalls Nishibayashi twinning his dedication to Hillsides with his love of baseball, “showing up in a Dodger uniform at our summer picnics and pitching balls with the kids; it was always a kick.”

“He was very instrumental in promoting Hillsides and raising awareness of our mission to the Episcopal church community,” added Barrios, who is now CEO of Mission-Driven PR. “He has such a heart for the kids.”

Convention coordinator Samantha Wylie said teaming up with Nishibayashi to plan the diocese’s biggest yearly get-together is both collaborative and fun, noting that his St. Paul’s Commons office also contains a Dodger batting helmet, baseball bat and a poster-size image of him at a game.

Nishibayashi, on the other hand, credits Wylie for “doing all the work.”

All things considered, he’s still a pediatrician at heart, and especially throughout the pandemic, Wylie said. “It’s been nice having a doctor’s perspective in the conversation.”

Chuckling, she recalled his bedside manner even extended to convention attendees. “After he first retired, we were at the Ontario Convention Center, setting up for convention and he actually had candy in his pocket. He was handing out peppermints to people.”

“I truly can’t remember a time when he hasn’t been actively involved in church,” she said. 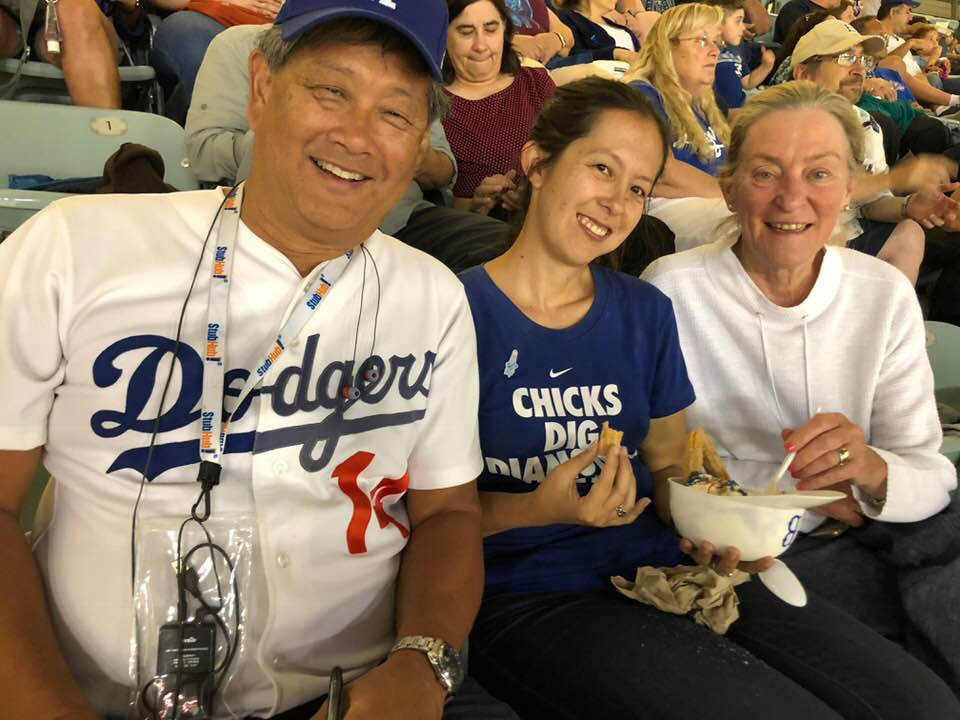 “As I began to carve out my own path in diocesan and churchwide leadership roles, the awareness of who I am was often as ‘Steve’s daughter.’ But, as my involvement has grown, he is sometimes identified as ‘Kathryn’s father’ –the tables have turned! This isn’t just limited to church involvement, either. When I was teaching, I often had students who were my dad’s patients, and students and families were always amazed that I was ‘Dr. Nish’s daughter.’

“Being identified as Steve/Dr. Nish’s daughter was always a signal to me of how much he is respected and admired,” she said. “The respect that people have for my dad was also extended to me, for which I am grateful.”

He has remained active at St. Mary’s “both out of dedication to church, but also to family,” she believes. “When longtime parishioners return for a visit to St. Mary’s, I often hear him reminiscing with friends he’s known since childhood. The family connections run deep.”

Gayle Vierma says Nishibayashi “has proven to be a really good counselor and advisor, as I’ve been senior warden these past three years. I trust him implicitly, whether it’s about convention, or protocol or polity or canon law, he’s the first person I call. He’s a calm person with a good sense of humor.

“He knows the history of the parish and everybody in it,” she added. “Parishioners look to Steve as a strong leader, and we all see him as someone who’s wise, and fair, and who’s helped St. Mary’s through the years and continues to do so.”