Proposed senior housing complexes in Buena Park and Placentia: ‘the Gospel according to ground leases’

Some Southland Episcopal congregations are saying, “absolutely, yes, in my backyard” and are working through partnerships to develop affordable senior housing on their underused land.

In Placentia, the Church of the Blessed Sacrament’s Santa Angelina Senior Apartments project will add 64 apartments plus a community center and manager’s unit, along with other campus improvements, according to the Rev. Barrett Van Buren, rector. 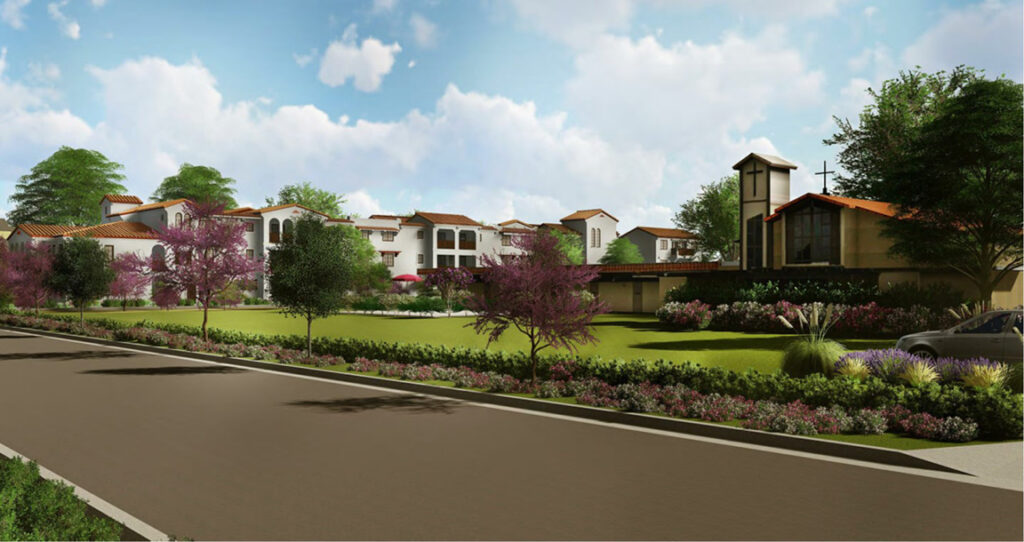 An artist’s rendering of the proposed Orchard View senior housing development in Buena Park shows how the new complex will be built on unused land next to St. Joseph’s Episcopal Church. Artwork: National Community Renaissance.

Similarly, in Buena Park, St. Joseph’s Church will provide 66 new apartments in its Orchard View Gardens complex, primarily for those aged 62 and older. As in Placentia, the apartments are designated for those earning below 60% of the median area income, says the Rev. Cindy Voien, rector.

The partnerships came about through Episcopal Communities and Services (ECS), an institution of the diocese, which connected the churches with National Community Renaissance, or National CORE, a leading nonprofit affordable housing developer, managing more than 10,000 units nationally.

“We found that we had similar missions and ministries,” says Sharon Pewtress, ECS’s vice president of strategic growth and business development. The connections are mutually beneficial: National CORE facilitates project design, financing, construction and manages the apartments while leasing the land from the church. Churches earn alternate revenue that contributes to their long-term congregational sustainability while the new apartments offer affordable living in tight housing markets.

Such partnerships are central to the church’s mission, according to Bishop John Harvey Taylor, who joined a March 4 webinar, “Yes in God’s Back Yard,” organized by People for Housing – Orange County, a non-partisan, policy-oriented, grassroots group founded in 2017.

Affordable housing partnerships enable congregations to engage their neighbors and care for the least in society as part of the call of Christians, Taylor told about 130 webinar viewers. A percentage of the apartments are set aside for permanent supportive housing for formerly homeless seniors. Often the unhoused are stigmatized rather than given the help they need, he said.

The projects at St. Joseph’s and Blessed Sacrament are outstanding examples of Christian witness and service, Taylor later told The News. “Our affordable housing projects in Buena Park, Placentia, and Riverside are the epitome of welcome and sanctuary, offered in the name of the Savior who had nowhere to lay his head,” he said. “Visionary leaders at all three asked themselves what the best use, the holiest use, of their available property was. I pray their example will inspire other churches to explore ways to use their real estate to care for God’s people while sustaining God’s church.”

Sarah Walker, a National CORE senior project manager who also attended the webinar, said the 29-year-old agency enters into ground leases but the churches maintain ownership of the land in a mutually beneficial, shared mission.

“We want to come up with a plan that everybody feels good about,” Walker said. “We consider ourselves to be part of a neighborhood when we develop housing, to stay for the long term, and we want to be a good neighbor.” 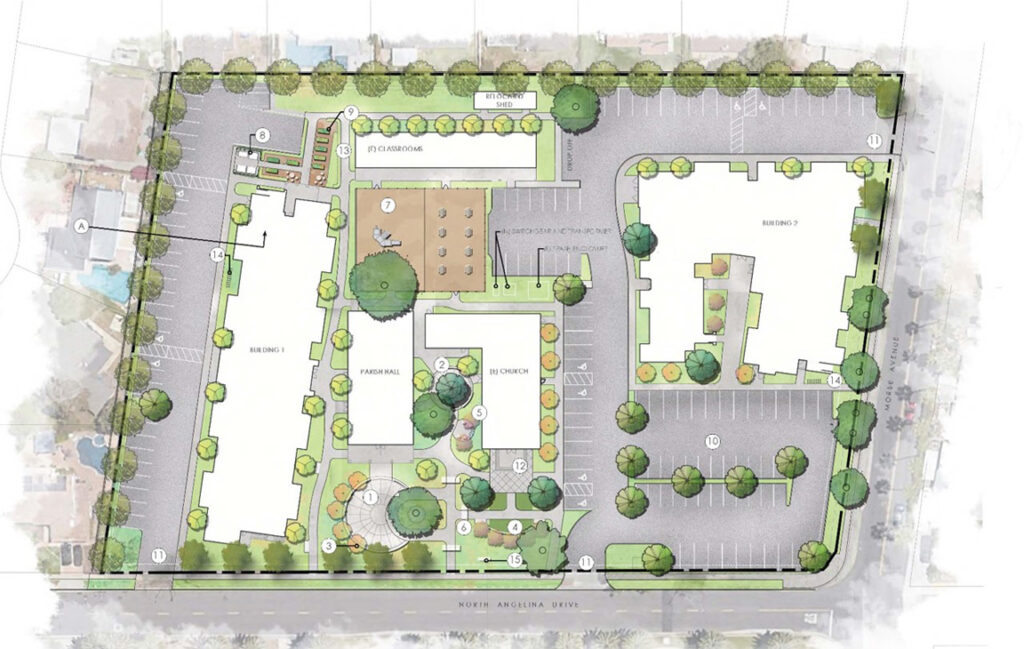 The site map for the proposed Santa Angelina complex in Placentia shows how the new structures will be set near existing church buildings. Artwork: National Community Renaissance

Construction planned to begin in 2022

ECS’s Pewtress said Taylor’s support “has really helped to facilitate the connection with not just these two projects, but potentially with others.” As bishop diocesan, Taylor is an ECS ex-officio board member.

Both projects have been approved by local governmental authorities and are ready to enter the financing phase, which could take at least a year, she said. National CORE will seek multiple funding sources. “We leverage traditional debt and equity low-income housing tax credit programs, funding from the County of Orange and funding from the state,” Washburn said.

Construction is expected to begin on both projects in 2022, with an anticipated completion date in mid-2023. National CORE will continue to manage the residences afterwards, offering enrichment and educational activities in onsite community centers.

Both sponsoring churches are located in North Orange County, where the annual household median income is about $107,000, and the housing shortage, as elsewhere in the state, is acute.

Statewide, fewer than one-third of Californians can afford to buy a median-priced home, compared to more than half of households nationwide, according to a January 13, 2021 Capitol Weekly report. In Orange County, the median home value in 2018 was more than $700,000 and the current housing deficit is expected to continue to climb. 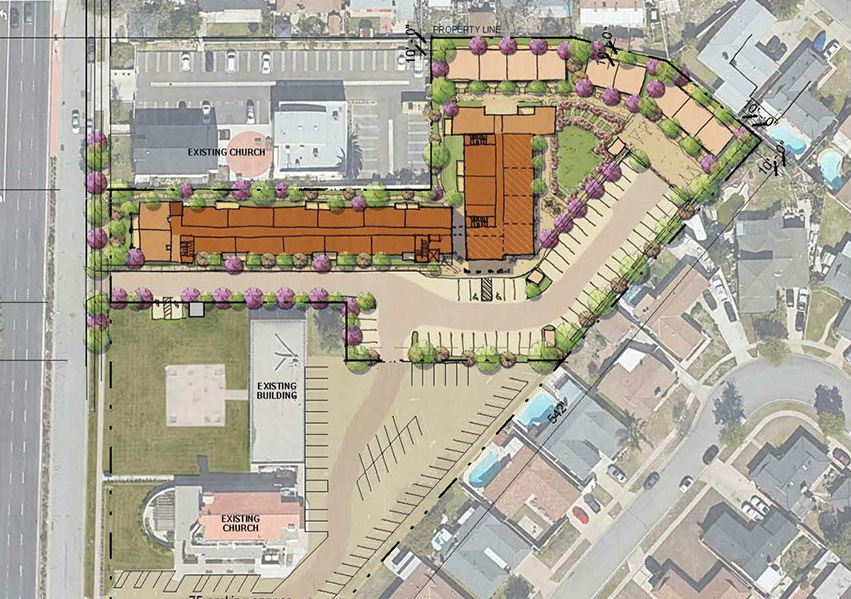 The orange buildings in this site plan show how the St. Joseph’s, Buena Park, property will be used for a new senior housing complex while maintaining the church and its parking area. Artwork: National Community Renaissance

“We’re over-the-moon happy about this,” Voien told The Episcopal News about the planned Orchard View Gardens development that will occupy the northern end of St. Joseph’s 3.2-acre site. The congregation chose the name, inspired by the church’s community orchard, she said.

St. Joseph’s property will be split into two parcels, with the church building and parking on one. The other parcel will include a multi-level apartment building and three additional structures, called casitas, that will provide nine one-story units along the north and east property lines adjacent to existing single-family homes.

Community members voiced enthusiastic support for the Buena Park project, which is located within walking distance of local restaurants and shops, public transit and grocery stores.

“Housing affordability is a growing challenge for seniors throughout Orange County,” Michelle Murphy, director of public affairs for Orange County United Way, wrote in a letter to the city council.

“According to the National Council on Aging, in 2019 over 25 million Americans age 60 and older were earning just $31,225 or less per year. In Orange County, it is nearly impossible to find a rental home for a senior with such income. In addition, the senior population is growing. By 2030, it is estimated that 1 in 5 Americans will be over the age of 65. As our senior population grows, so too should our housing options grow to provide safe, decent, and affordable communities to meet their needs.” 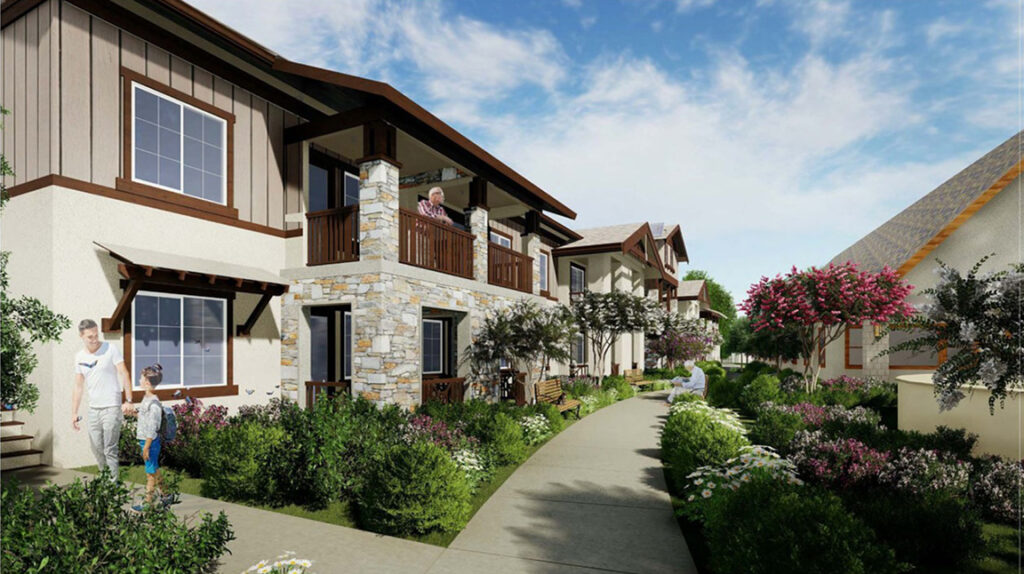 Rochelle Mills, president and CEO of Innovative Housing Opportunities also cited a projected “silver tsunami … an influx of seniors with housing and social services needs greater than our current ability to accommodate them.”

Mills said the project’s amenities, such as a community center, fitness room, computer room, and outdoor lounge areas “will help revitalize the existing St. Joseph’s Church site and incorporate curb and sidewalk repairs, new trees and landscaping, that will improve the entire neighborhood.”

Availability of land is a crucial determinant for prospective sites for similar projects, according to National CORE’s Walker. While projects are unique to their settings, the agency strives for designs that complement existing buildings and neighborhoods, she said.

The process can be a lengthy one. National CORE’s first meeting with Blessed Sacrament was in March 2018, Walker said. In the interim, the agency has held more than a dozen meetings as they sought approval from the vestry and congregation, neighbors, community residents, and local city governmental staff and public officials.

Blessed Sacrament senior warden Allyn Lean called plans for two Craftsman-style, two-story residential buildings on the church’s 3.9-acre site “a win-win, for both CORE and for the church and the diocese.”

The church and a daycare center are expected to remain open during construction. The residential buildings will be nestled horseshoe-style around the church building. The parish hall and a roof will be replaced, and outdoor children’s picnic space, landscaping and plaza areas will be added.

National Core “is improving our buildings and grounds,” Lean said. “It’s a wonderful circumstance that will guarantee the church long-term viability. What I really, really like about this project is it’s so proximate to commercial areas, to retail merchants, yet it keeps the neighborhood residentially oriented.” 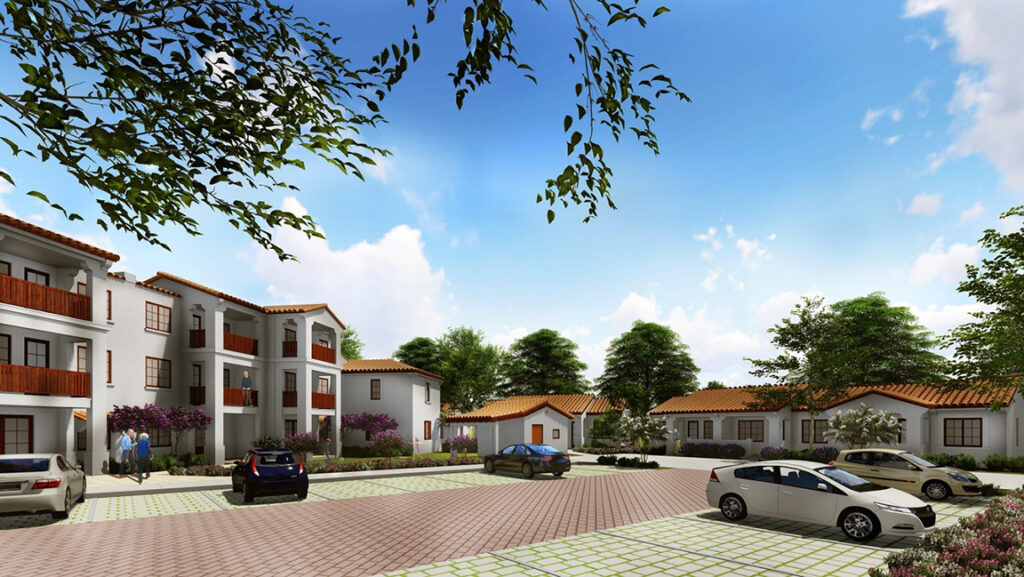 The agency continues to offer a broad spectrum of care and services to people of all faiths and economic means in various locations, including the Covington in Aliso Viejo, the Canterbury in Rancho Palos Verdes, MonteCedro in Altadena and Twelve Oaks in the Montrose neighborhood of Glendale.

The ECS partnership with local churches and organizations like National CORE creates ‘a great opportunity for the future of our diocese,” says Van Buren, Blessed Sacrament’s rector. “You have a wonderful environment that is attractive for people, wanting to have a place of refuge and peace and safety and feeling the love of Christ.

“I am so excited that we are on the front lines, St. Joseph’s and Blessed Sacrament, to see how this all comes to fruition and how it all ends up happening. I’m excited to see that we’re doing God’s perfect will in this outreach ministry.”