Service celebrates Barbara Harris, champion of ‘the last, the least, and the left out’ 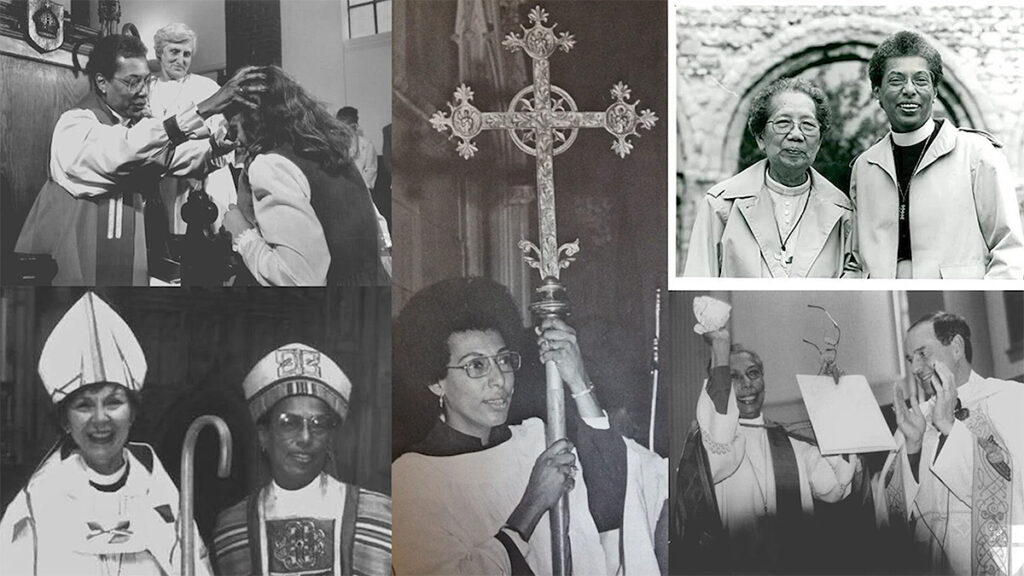 A slide from a presentation during the Barbara Harris memorial service on March 13 shows photos from Harris’ life. At center she carries the cross at the ordination of the “Philadelphia 11”; at upper right she poses with Li Tim Oi, first woman priest in the Anglican Communion.

Southland Episcopalians, along with dioceses and congregations across The Episcopal Church, gathered virtually on Saturday, March 13, 2021, to commemorate the life and witness of Massachusetts Bishop Suffragan Barbara Clementine Harris, on the one-year anniversary of her death.

The irrepressible, no-holds-barred, gravelly-voiced, cigarette-smoking Harris – the first woman ordained a bishop in The Episcopal Church and the worldwide Anglican Communion – was remembered as a prophet and pioneer during the hour-long Spanish-English bilingual service livestreamed on the diocesan Facebook and YouTube pages.

Gospel music, laughter and Harris’s own words – recalled in written and video clip sermon excerpts – paid tribute to the former civil rights activist, prison chaplain and self-described champion of “the last, the least and the left out” who famously called out the church for treating the LGBTQ+ community as though they were “half-assed baptized.”

“We search for many things in this world. … like our Lord, we are at a crossroads in the church and in society,” according to an excerpt read from one of Harris’s sermons. “We still have a choice, and Jesus is asking us, ‘Do we have a thirst for the kingdom?’ Are we content to settle for the temporary thirst quenchers of life, things that will never slake the thirst of our parched, dry souls?

“Or do we thirst for righteousness, for peace, for justice, for the liberation of all God’s people? Do we have a thirst to merge as truly faithful Christians, to be more than we are? Each of us must answer for himself or herself. Jesus is patiently waiting for our answer.”

Bishop Diocesan John Harvey Taylor, in welcoming participants to the commemoration, recalled a down-to-earth friend and pastor. “You can imagine, I was a little nervous when I met Bishop Harris for the first time. This living legend, this pillar, holding up the arc of justice. But all she wanted to talk about was the circle of friends she’d grown up with in Philadelphia,” he said. “Not everyone was still alive, but she spoke every week to those who were. Her arms embraced the world.” 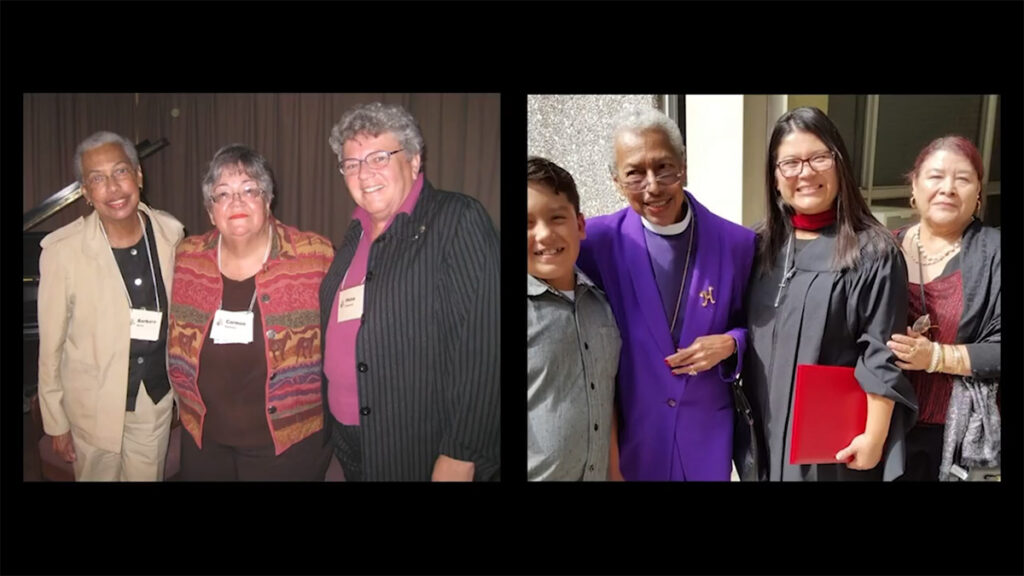 Harris was born June 12, 1930 in Philadelphia, Pennsylvania, the second of three children of Walter, a steelworker, and Beatrice Price Harris, a church organist and choirmaster. Harris helped register Black voters in the South, participated in the Rev. Martin Luther King Jr.’s 1965 march from Selma to Montgomery and became president of Joseph V. Baker Associates, one of the country’s first black-owned public relations firms.

She served as a prison chaplain and lay leader before answering a call to ordained ministry. She was ordained a deacon in 1979 and a priest a year later, at age 50. She was elected bishop suffragan on Sept. 24, 1988 and consecrated on Feb. 11, 1989, at the Hynes Convention Center in Boston, at a service attended by 8,000 supporters and well-wishers.

The Rev. Canon Jamesetta Glosson Hammons recalled “that glorious celebration,” as a great occasion, which she attended along with Angelenos Ken Higginbotham, the Rev. Margaret McCauley and others. “For me, Bishop Barbara was an educator. She taught many things,” said Hammons, a retired deacon. “You just need to follow her. The example of not taking no for an answer, of pushing back on the status quo, protesting and marching in the streets as though she and we are marching to Zion.”

Los Angeles Bishop Suffragan Diane M. Jardine-Bruce paid tribute to Harris as “a brilliant preacher, gifted teacher, mentor, truth teller, pastor and friend. You’d have to be remarkable to be the first woman bishop, to break through that last stained-glass ceiling. And she was – funny, reverent and irreverent, quick-witted, a true friend.

“There wasn’t a person who met her that didn’t go away from that experience knowing Jesus a little bit better.” 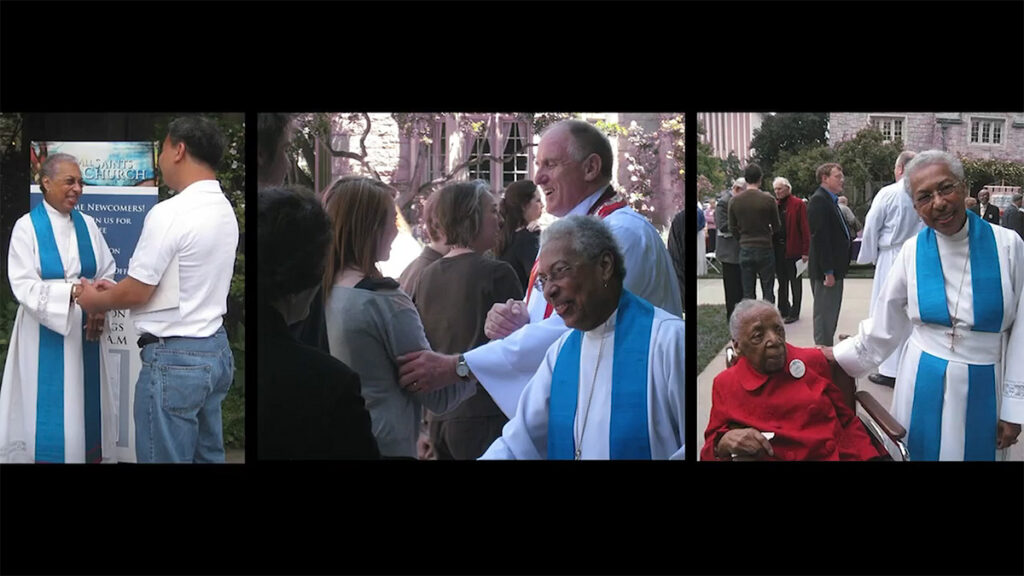 There were Harris’s funny stories and “anyone who knew Bishop Barbara knew she had a special way of telling the story,” Pound said in a pre-recorded video. There were dinners, trips to nearby casinos and to General Conventions where she appreciated Harris’s enormous popularity and presence. “I just realized how many people knew her and loved her while walking the convention floor with her.”

Harris’s recollections of experiences of racism were among the sadder moments, Pound recalled. Like eating in the Blacks-only section of restaurants. Or “the bishop who came to her Black congregation on a Monday night to confirm a group of youth. He wore white gloves, so he did not have to touch their heads.”

The Rev. Norma Guerra, associate for the diocesan Transitions and Vocations Department, called Harris a “hero … who opened doors for many of us” including women, people of color and the LGBTQ community, and whose life and legacy continue to inspire all people.

“Her prophetic voice keeps reminding us how much she was involved with women’s ordination before ever considering her own sense of call,” Guerra said. Harris led the July 29, 1974 procession for the “irregular” ordination of the Philadelphia 11, the first women ordained in The Episcopal Church. Added Guerra, “She reminds us that there is still much to be done.”

The service, which received some 1,300 views, included music by the Episcopal Chorale, directed by Canon Chas Cheatham, and several youth choirs.