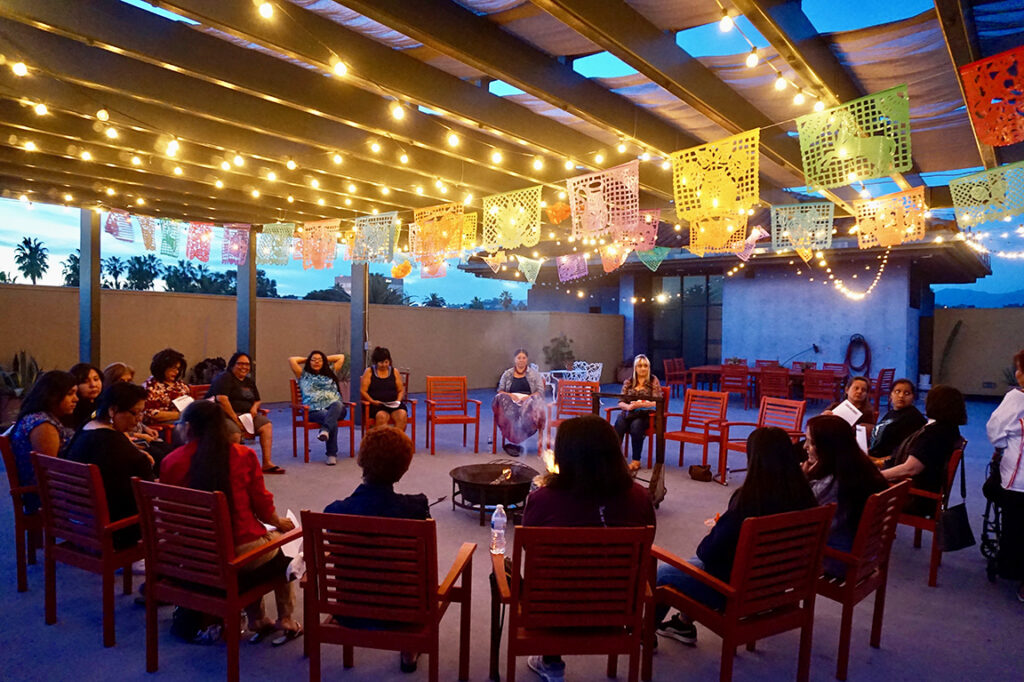 A talking circle for Native American women meets in 2019 on the roof of St. Paul’s Commons. Photo: Courtesy of Mary Crist

Janelle Fast Horse Hummingbird has joined the women of a Native American talking circle for at least a dozen years, gathering mostly on the St. Paul’s Commons rooftop to share stories, to offer support, to pray, to bless one another with an eagle feather and smoldering sage around a sacred fire, and to sing the “Strong Woman Song.”

The “First Women Gather Around the Fire – Los Angeles” talking circle is a vital link to ancient tradition for Hummingbird, 61, who was a toddler when her parents relocated to Los Angeles from the Rosebud Indian Reservation in South Dakota.

Mary Crist coordinates Native American ministry in the Diocese of Los Angeles. An enrolled member of the Blackfeet Nation, she is a chaplain to the talking circle groups. Photo: Diane Jardine Bruce

“I am an urban Indian. I lost touch, but the circle brings me more of the traditional ways,” said Hummingbird, who is Lakota, and lives in Downey. “A lot of healing happens in the circle.”

Pre-pandemic, as many as 20 women gathered in Echo Park at 6 p.m. on the second Tuesday of each month for the talking circle. Another group of 20 gathered on the third Saturday of each month. Since COVID-19, they have met weekly through Zoom calls, according to the Rev. Canon Mary Crist, an enrolled member of the Blackfeet Nation, who considers herself the group’s chaplain.

“Talking circles are a historical way of including the voices of all the people on any given subject, so that no one is left out,” said Crist, who coordinates Native American ministry in the Los Angeles diocese.

“The talking circle is an attempt to be a healing influence for people who suffered the destruction of their family and the dislocation of their people,” added Crist, whose grandparents relocated to Texas from the Blackfeet Indian Reservation, near Montana’s Glacier National Park. “They moved in the 1920s, because there was no food. There were no buffalo.”

She and others like Roselyn Smith are looking forward to returning to in-person gatherings where, after a potluck meal, chairs are arranged around a firepit. Once the fire is stoked, sage is burned, and medicine carriers – one holding the smoldering sage and another an eagle feather – bless or smudge each participant with the cleansing smoke.

Each woman, in turn, breathes in the purifying smoke which, Smith said, carries their prayers to the heavens. “It’s like helping to just make sure the circle runs,” said Smith, 65, who grew up in Phoenix and whose tribal affiliation is Salt River Pima Maricopa.

“I carry the feather. We smudge everybody. I am usually the one who walks around with whoever does sage and we sage everyone. It’s an honor to carry the feather. I take it like an honor, like this is where my God has wanted me to be, because I’ve been gifted with feathers through the years and so I stepped into the role.”

After the smudging, prayer is offered, and then each person speaks in turn until all in the circle have shared.

Sometimes, praise and thanksgivings are offered. Other times, there is lament and requests for prayers.

“Everything spoken in the circle is kept confidential, and no one speaks until it is their turn. The sharing can be anything, from celebratory to asking for guidance. It could be that a relative is ill and you’re asking for healing,” said Crist. “It is very much a women’s support and empowerment group.” 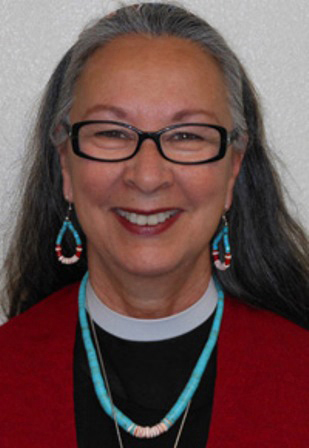 The women say the Rev. Canon Debbie Royals started the group, when she was diocesan missioner for Native American Ministry in Los Angeles. But Royals, who currently serves a similar role in the Diocese of Arizona, begs to differ. “The circle,” she says emphatically, “started us.”

At that time indigenous youth were meeting every other Tuesday at St. Paul’s Commons, “and all the moms, aunties and grandmas were sitting off to the side. We had a lot of time to share our challenges,” said Royals, a member of the Pascua Yaqui tribe, whose homelands stretched from the modern-day southwestern United States south into northern Mexico.

It became obvious that many Indians are in Los Angeles because of the government relocations, said Royals, a Tucson native. “There were all these people from all these different tribes in an urban setting, which means they were not directly connected or were not connecting regularly to their cultural traditions.”

Forced relocations of Native Americans began in colonial America as European settlers moved onto their lands. In 1830 President Andrew Jackson signed the Indian Removal Act, which pushed Indian tribes west of the Mississippi River. In 1852 a U.S. government report, “The Indians of Southern California,” explained that many Californians believed “destiny had awarded California to the Americans to develop” and that if the Indians “interfered with progress they should be pushed aside.”

Los Angeles County is home to the largest urban American Indian population – more than 160,000. In 1952, the federal government created the Urban Relocation Program, which encouraged American Indians to move off reservations and into cities such as Chicago, Denver, Seattle, and Los Angeles. They were lured by the government with hope of a better life, but many had difficulty finding work and that promise was not realized. 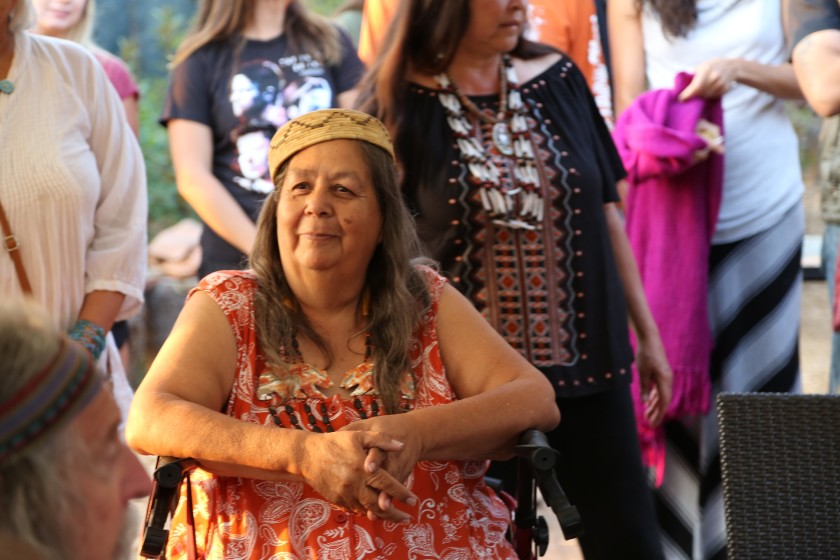 Tongva elder Julia Bogany, who died in April 2021, was a founding member of the talking circle.

A 2007 retreat drew 30 women to what was then the Cathedral Center of St. Paul, including Julia Bogany, a well-known, venerated Tongva elder who worked tirelessly to gain recognition for her tribe. “We made sure we invited Julia Bogany because we were on Tongva land and she was Tongva,” Royals said.

Together, Bogany and Royals initially organized the circle. “We named four medicine carriers, for earth, air, fire, and water, and began to do work in the area of preparing young women for a rite of passage.” Conversations focused on health and wellness, mental health resources, as well as issues that arose spontaneously within the circle – sexual abuse, domestic violence, sobriety, a cancer diagnosis.

Bogany was elder-in-residence at Pitzer College for the Native Youth to College Program. In 2021, the California Missions Foundation awarded her the Chairman’s Award, which honors those who made an impact on the study of early state history. Bogany died in April 2021 from complications of a stroke. (A Los Angeles Times obituary is here.)

“The women decided they wanted us to do a regular gathering, and that’s how it started,” Royals said. “So I didn’t start the circle; the circle started us.”

Since, individual gifts have surfaced and inspired conversations around cradleboards, beadwork, drumming, and learning about each other’s culture and traditions.

The women began to learn to sing in one another’s languages; the Strong Woman Song, the Cheyenne healing medicine song, a water song, a song for the calling of prayer. Networking with other indigenous groups and learning the songs led to performing them at cultural events.

“The group strengthens and empowers women,” Royals said. “We have been presenters at conferences where the medicine carriers have come to help lead an entire conference within the context of the church. It’s really good because it gives an opportunity to women who maybe have never had a chance to use their gifts for leadership and to be stronger women.”

A logo for the group was created by Elizabeth Hummingbird, Janelle’s daughter, and is used on T-shirts, baseball caps, blue jean jackets, shawls and, most importantly, on the circle’s regalia, their native dress worn at such occasions.

“We called her Sunshine,” Elizabeth’s mother told The Episcopal News. “She passed away in 2014. She was 26. She made the First Women logo that we wear on our regalia. We wear it for events. It means a lot to me because she had a connection with the circle, and to this day it helps me heal from the hurt of losing her.” 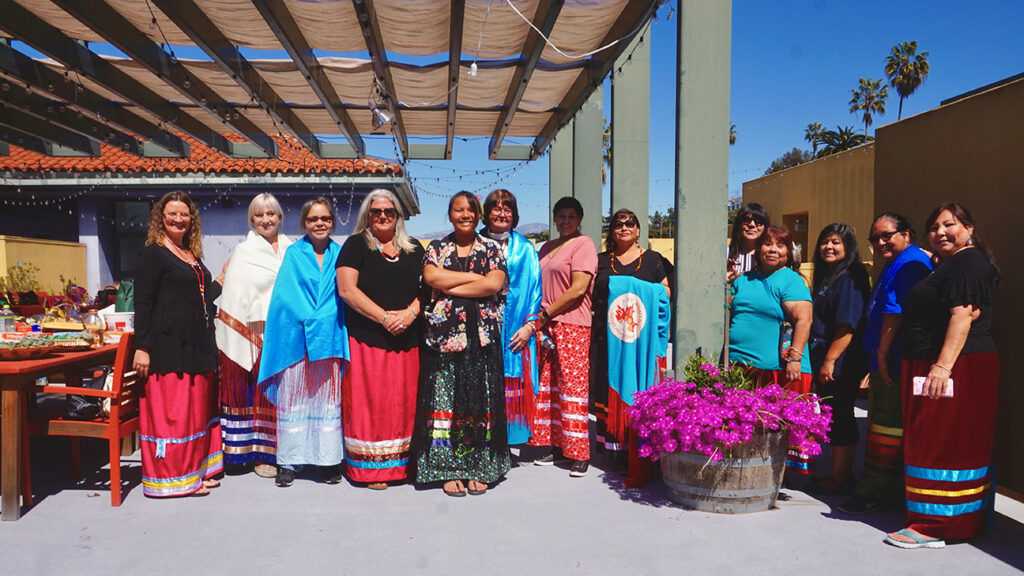 Martha Duron, 62, says she prayed as she sewed the regalia for the group, “which is worn by the entire circle to any Native function we attend together. It is to represent us as the talking circle,” she said.

“Anything we make we pray over,” she added. “As I’m sewing, I put on Christian music, and my native songs and make sure it’s all done in a good way. And I burn sage, too. This we are to pass down to our children, to teach them to show them how to make our regalia.”

As a sage medicine carrier, “the circle is a very important part of my life because it means I’m not only among women, but indigenous women,” Duron said. “We have an understanding of what has happened to us in our past, and how we can empower our future and help one another spiritually, physically, emotionally, mentally, even financially if we have to – how to lift each other up, to pull strength from each other.”

The circle helps empower “native women (to) come together to reconnect with others from their tribal traditions and to help be a source of support in the city for people who were struggling and still struggle from what are usually said [to be] the effects of the Doctrine of Discovery.”

The Doctrine of Discovery, originating in a decree issued by Pope Nicholas V in 1452 and formalized in American law in an 1823 United States Supreme Court decision (Johnson v. M’Intosh), established a spiritual, political, and legal justification for colonization and seizure of land not inhabited by Christians. It was the inspiration in the 1800s for the Monroe Doctrine, which declared U.S. dominion over the western hemisphere, and Manifest Destiny, which justified American expansion westward by promoting the belief that the U.S. was destined to control all land from the Atlantic to the Pacific and beyond.

Duron, a member of the Lakota tribe who grew up on the Pine Ridge Reservation in South Dakota, said the talking circle has also been involved in community events. “Now that Columbus Day has been replaced with Indigenous People’s weekend, we participate in a big event held every year at Griffith Park sponsored by the United American Indian Involvement,” she said. The group has also partnered with others to help sponsor senior bingo and a Grandparents Day, participated in an annual 5K run, and joined in an annual candle-lighting ceremony to remember elders who died the previous year, she said.

Duron, who was praying while sewing purple and white traditional ribbon dresses, shirts and ties to be worn by her 25-year-old grandson’s wedding party in just a few days on the Pine Ridge Reservation, marveled at how the circle has transformed its members.

“When we first came together, we didn’t know how to sing any of the songs,” she said. “We’ve learned many songs in various languages.” She sings a few notes of the Strong Woman song in a language not her own. “It is meant to lift a woman up spiritually, to continue her journey in life, to encourage her to stand strong.”