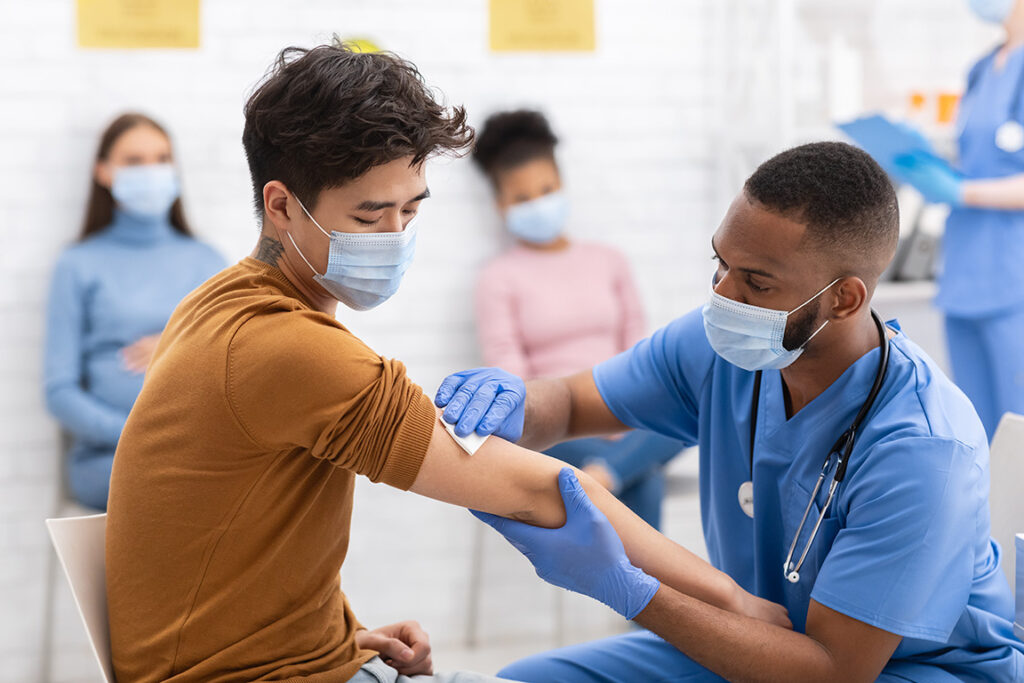 Carl Kubota, junior warden at St. Mary’s Church in Los Angeles, the diocese’s historic Japanese American congregation, initially had some reservations about receiving the coronavirus vaccine, mostly because of its speedy approval.

But as cases spiked throughout Los Angeles county, and after losing a cousin to the virus, Kubota, 54, a physical therapy supervisor at Centinela Hospital in Inglewood, changed his mind. “I just felt this vaccine is the only way to get ahead of this, to control it. I felt it was necessary to protect myself and my family.”

Receiving both doses, he said, felt like getting a seasonal flu vaccination or a tetanus booster shot: “I had a sore arm for a day, but that was about it.”

Now, he and other Southland Episcopalians are encouraging vaccinations, especially among communities of color, where COVID-19 mortality rates have been consistently higher than among whites.

A Dec. 21, 2020 “Color of COVID,” report by the APM Research Lab indicated that Indigenous, Black and Latino Americans were at least 2.7 times more likely to die than whites. The coronavirus mortality rate for Pacific Islanders was 2.3 times higher than among whites, while Asian Americans experienced just a slight mortality advantage over whites, according to the report.

Yet, the same report suggested that only about 3 in 5 American adults and only about 2 in 5 Black Americans were interested in receiving the COVID-19 vaccine. Similarly, Black, Latino and Indigenous communities are less likely to get seasonal flu shots.

Dr. Nina Harawa, an epidemiologist and professor at the UCLA Fielding School of Public Health and at the Charles R. Drew University, said she reviewed research for the two vaccines currently available, and is confident the benefits outweigh the risks.

“The trials done for Pfizer and Moderna involved over 75,000 people, including many older people, up to age 95,” said Harawa, a lay leader at Holy Faith Church in Inglewood who is African American. “It was a diverse group of people. A large proportion of them had underlying conditions.

“And the clinical trials consistently showed it [the vaccine] was effective across groups, regardless of age, gender, ethnicity, race.”

Allergic reactions were rare, but those concerned about experiencing them can check with their health care provider in advance of receiving the vaccine and also take precautions, like having an Epinephrine Auto Injector, or EpiPen with them, she said. If side effects were experienced, they tended to resolve within a day. “There is pretty strong evidence that it’s safe, but not entirely without risk.”

Some distrust arises from the speedy approval of the vaccines, as well as historic inequities. “I’ve been trying to allay those fears among people of color in particular,” Harawa said.

“A lot of what I do is around health disparities, mistrust and concerns about experiences with medicine and the health care system,” she said. Her research has involved studying HIV infections in African American and Latino communities and developing effective, culturally relevant interventions for prevention, care, and treatment.

The pandemic’s urgency and existing research helped facilitate the vaccine’s rapid development and distribution. Prior to the pandemic, development and approval of vaccines typically took several years, according to a Nature Magazine report.

African Americans’ mistrust of health care systems stems from the 40-year Tuskegee Syphilis Study of the Negro Male. From 1932 to 1972, 600 rural African American men suffering from syphilis went untreated — although treatment was available — by U.S. public health officials, who studied the disease’s course. Many died from the disease, and some of their wives and children also contracted it.

Harawa said that churches have a role in encouraging communities of color to get vaccinated because, unlike the medical establishment, faith leaders “have earned and maintained the trust of their communities.”

She added: “People need spaces to ask questions and to have their specific concerns addressed. I have a cousin who pastors a Baptist church, and I am giving a talk with them about COVID-19. All those things are helpful.”

The Rev. Canon Joanne Leslie, former archdeacon of the Diocese of Los Angeles and retired professor of Community Health Sciences in the UCLA School of Public Health, who has been vaccinated, agrees.

“I am passionate on this issue of vaccine promotion via faith leaders,” Leslie recently told The Episcopal News. “It brings together my longstanding work in public health with my diaconal ministry. As with the rollout of the Affordable Care Act, I feel that this opportunity to play a role through the church in letting people know about the benefits of the vaccine and how safe it is, is exactly what I got ordained to be able to do.”

She added that herd immunity will only be achieved “if about 70% of the population is vaccinated. So, we each need to do our part.

“It’s like paying taxes; we must all participate for it to be effective,” Leslie added. “If you have any concerns or you know people who are hesitant to be vaccinated, please seek out reliable information from your health care provider or a reputable source, such as the websites of the National Institutes of Health, the Centers for Disease Control, or the Mayo Clinic.”

Similarly, the Rev. Ada Nagata, a retired nurse and interim rector of Church of the Transfiguration in Arcadia, said she hopes to relieve and support frontline workers. “As soon as I receive the vaccine, I will volunteer to help administer it.”

Elsewhere in Los Angeles, St. Philip’s, a historically African-American congregation, has been impacted by the coronavirus, among both its English- and Spanish-speaking congregations, according to the Rev. Glenn Libby, rector.

“Already, we talk a lot about staying in and being careful and we don’t do parking lot communion because of the intensity of the virus,” said Libby who plans a Feb. 7 online conversation to encourage getting the vaccine.

The Rev. Juan Jimenez, rector of St. Michael’s, Anaheim, said he received the first dose recently and has shared information with his congregation. Some are mistrustful. For others, access to the vaccine has been challenging.

“Most members of my congregation use their cell phone to connect to the internet,” Jimenez told The News. “The process is hard to do and the website where you sign up crashed for a couple of days.”

He said there have been eight COVID-related deaths among the congregation. “At one point, I had four people in intensive care at the same time. They all died, eventually.”

The pandemic’s economic, physical and emotional toll is immeasurable, he said. “Whole families are living in small spaces. So, when one comes down with COVID, the whole family comes down with it. Right now, I have at least 20 people who are sick with it.

Economically, “lack of access to funds is a major issue,” Jimenez added. “We are trying to help people, but we don’t have much. We are trying to find which cemeteries are the cheapest. Many people don’t have money for burials. Right now, I have one burial outstanding and I have recently done five.

“Basically, we ask for prayers and for the diocesan family to keep us in mind.” (In August 2020, St. Michael’s was awarded a grant from the diocese’s One Body One Spirit Emergency Appeal fund “to support contract employees and outstanding bills after significant decline in income due to loss of facility usage, and also after many members lost jobs in the local hospitality industry amid the pandemic,” according to reports issued to donors. Grant amounts from that cycle ranged from $2,500 to $6,000. Donations to the fund are encouraged and may be made here.)

Although 95% of the St. Michael’s preschool staff are eager to be vaccinated, gaining access is challenging “because of a lack of vaccines. We are trying to make it as secure and as safe as possible. It’s been crazy, just trying to survive.”

Meanwhile, St. Mary’s parishioner Maxine Yamamoto, 82, a Torrance resident, recently received the initial dose from Kaiser Permanente. Glad to begin “to combat the disease,” she said, “at least now, you feel a little bit more comfortable that your body’s got some immune protection. I’ll feel better once I have both shots and am protected. Everybody should go get their shot and not be afraid of it.”