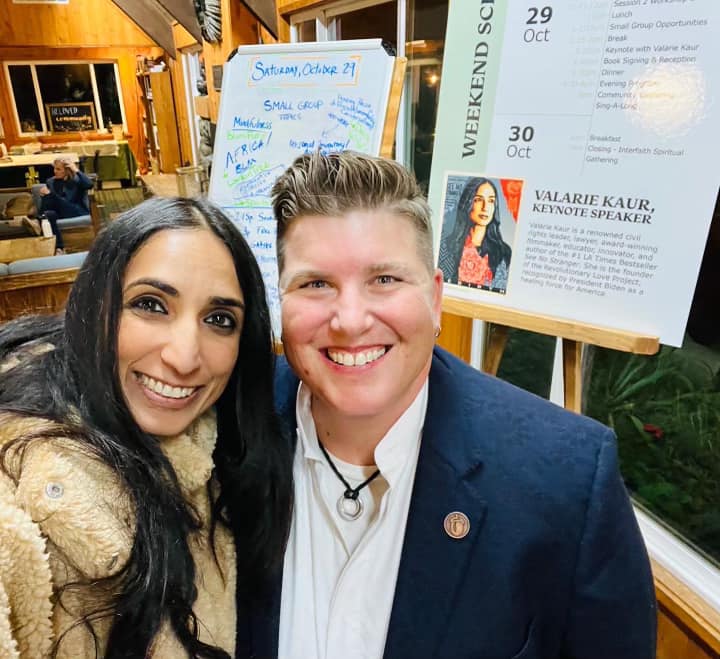 [The Episcopal News] – Revolutionary love “is the choice to enter into labor for others, for our opponents and ourselves,” renowned filmmaker, activist, and civil rights attorney Valerie Kaur told participants in Camp Stevens’ 70th “restorative justice” anniversary celebration Oct. 28-30.

“I am here with you all because I choose to believe that we can labor for the nation that is longing to be born, the world that we dream for our children and their children and that every single one of us has a particular role in that labor,” said Kaur, who is Sikh.

Kathy Wilder, executive director, welcomed guests to the weekend retreat at the camp, located in Julian in the mountains east of San Diego.

The celebration aimed “to listen and to learn and to love, to start the process of healing across faiths, generations, identities, cultures, and so much more,” Wilder said in a video message on the camp’s website. The gathering also included workshops, activities, and an invitation to join the camp’s “70 Years of Stories” project, “whether you were a first-summer camper in 1952 … or planted trees after the Angel Fire [or] attended virtual community gatherings during the pandemic.”

Its contributions to the Episcopal Church community in Southern California have been enormous, says the Rev. Canon Melissa McCarthy, canon to the ordinary in the Diocese of Los Angeles and a camper, counselor and chaplain for many years. “Camp Stevens has been a place of transformation for generations. There are so many whose lives have been changed, who have found a way to relationship with God and God’s creation.”

Revolutionary love and ‘a nation that is longing to be born’

Kaur’s Revolutionary Love Project aligns with Camp Stevens’ mission to “inspire, challenge and empower personal, social and environmental transformation,” Wilder said when introducing the author of See No Stranger: A Memoir and Manifesto of Revolutionary Love. The best-selling memoir “cracked my heart open and showed me a way forward,” Wilder said.

Revolutionary love “is the choice to enter into labor for others, for our opponents and ourselves,” said Kaur, who is Sikh. “I am here with you all because I choose to believe that we can labor for the nation that is longing to be born, the world that we dream for our children and their children and that every single one of us has a particular role in that labor.”

The post-Sept. 11 murder of a friend’s uncle spurred her to activism, Kaur said. Balbir Singh Sodhi was shot in a 2001 hate crime in Mesa, Arizona. Frank Roque, an aircraft mechanic, targeted the Punjab, India-born Sikh entrepreneur and father because of his beard and turban, mistaking him for an Arab Muslim. Roque, who received a life sentence for the murder, died in an Arizona prison medical center May 11, 2021. 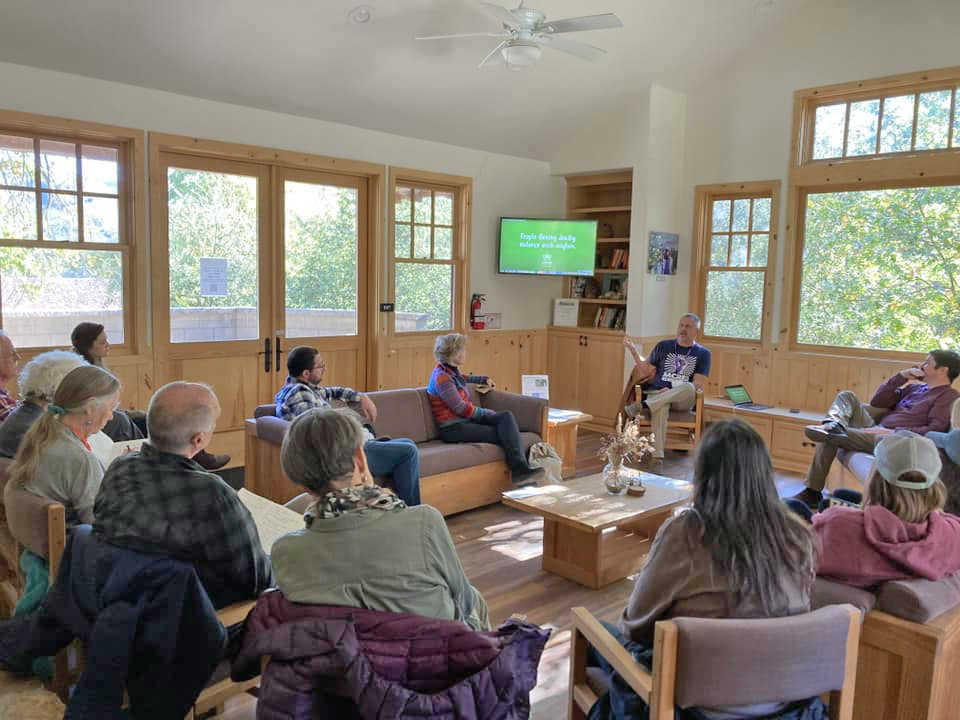 Troy Elder, executive director of IRIS, the Diocese of Los Angeles refugee and immigration ministry, and refugee officer for the Diocese of San Diego, conducts a workshop during the anniversary weekend. Camp Stevens photo

Revolutionary love is the call of our time, an invitation echoing thousands of years, from Jesus Christ, Abraham, Muhammad and Guru Nanak (founder of the Sikh faith) to Gandhi, Martin Luther King Jr., and others, Kaur said.

Employing the symbol of a compass, which she said pointed to wonder and listening, Kaur said that grieving with and fighting with and for others, and tending to their wounds as well as our own, has the power to get us to revolutionary love.

“The root of all love is to wonder … as a way of moving through the world. Imagine … every time you see a face on the subway or street corner, you’re saying you’re my sister, brother, sibling, beloved? When you are doing that, you are retraining your eye to see all others as kin,” to see no stranger, she said.

Who and how we see shapes our actions and determines the way we show up for that person, even the leaders we elect. Showing up for one another opens us to listening to each other’s grief, she said.

“There’s a lot of grief out there right now … unresolved grief in our bodies and our communities. It may make you want to shut down; it’s too overwhelming. There is no fixing grief. There is only bearing it, and then bearing it together.”

Each person has the ability to fight for others, whether “it’s with your doctor scalpel, your artist brush, or your Twitter feed, or your pocketbook, or your time.”

She traveled to India to visit Sodhi’s widow. “I wept with her, and I said, ‘What would you like me to tell the people of America?’

“I was expecting anger.”

But instead, she continued, the widow said: “’Tell them thank you. When I went to America for my husband’s funeral, they came out in the thousands. They didn’t know me, but they grieved with me – Christian, Jew, Muslim – they chose to love me. Tell them thank you for loving me.’”

Kaur said she began to find courage through looking not only at the suffering and isolation happening in American society, but also to “all the ones who are brave enough with their love to hold our hands even when we’re facing the abyss. To breathe with us; to push with us; to love us through … so if that kind of love can sustain long-term social change, then what do we do when the person in front of us is an opponent?”

Listening to an opponent – anyone whose ideas or beliefs and actions oppose yours – “is not to change them or legitimize them or compromise with them; it is to understand them, for in understanding them we preserve their humanity and our own.” An enemy, she said, is a fixed and permanent identity, while an opponent is a fluid category.

Such understanding paves the way to tend to their wounds and our own, Kaur said.

“There are no such things as monsters in this world, there are only human beings who are wounded, who act out of their insecurity or greed or defiance. It doesn’t make them any less dangerous, but when we choose to see their wound, they lose their power over us and we get smarter about how to respond.”

Responding involves harnessing “divine rage,” the aim of which is not vengeance but reordering the world, she said.

“So many of us have been taught to suppress our rage when we are hurt … especially a South Asian woman of color. As a girl I thought I was only as polite or good or lovable as my ability to choke down my anger,” Kaur said. 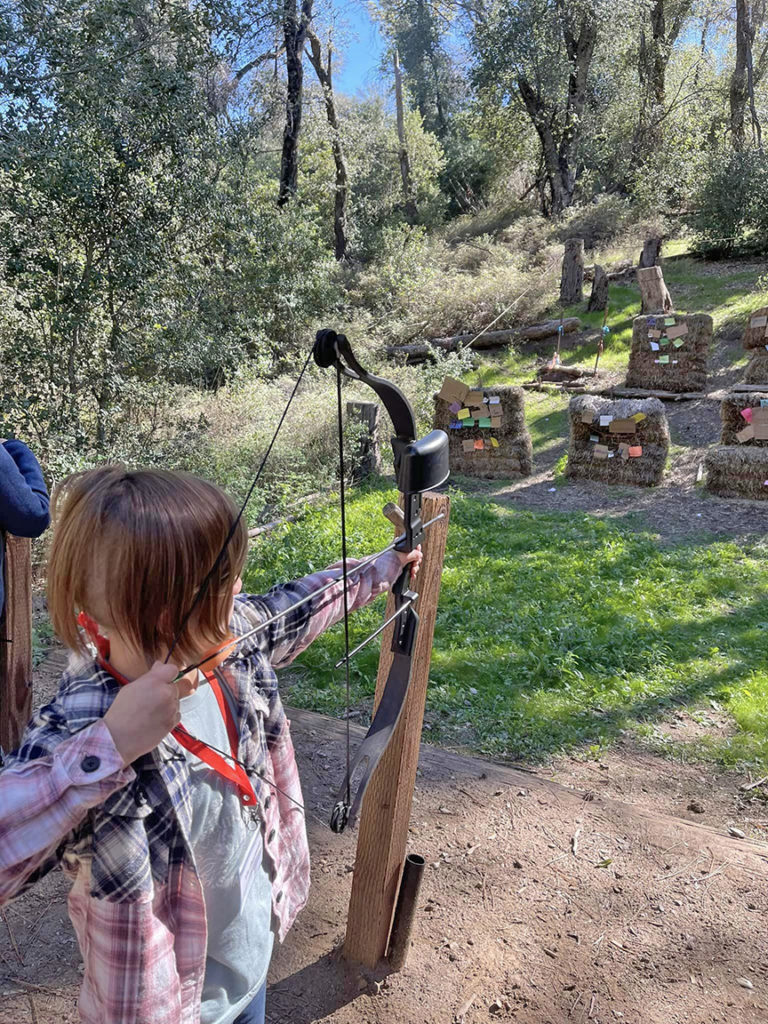 A young camper takes aim at a target during the anniversary weekend, which included classic camp activities. Camp Stevens photo

“Once we choose to forgive, we free ourselves,” Kaur said. “Forgiveness is for you not them. You free yourself and … it opens up the previously unimaginable possibility of reconciliation.”

When she communicated with Roque, she said, “I [eventually] understood that so much of white nationalist rage in this country is a symptom of unresolved grief. They are grieving the illusion that this nation ever belonged just to them in the first place. It might not be my role to tend to that grief, but it might be yours, because every single one of us has a particular role to play in the labor of revolutionary love.”

And finally, the compass points inwardly, to self-love, to know “when to breathe and when to push,” Kaur said. “So, I ask you, how are you breathing every day?”

There is another voice she has cultivated: “the wise woman within,” whose messages of love include ‘You don’t have to be perfect; you just have to be present.’”

Kaur’s presentation may be viewed here (You Tube) 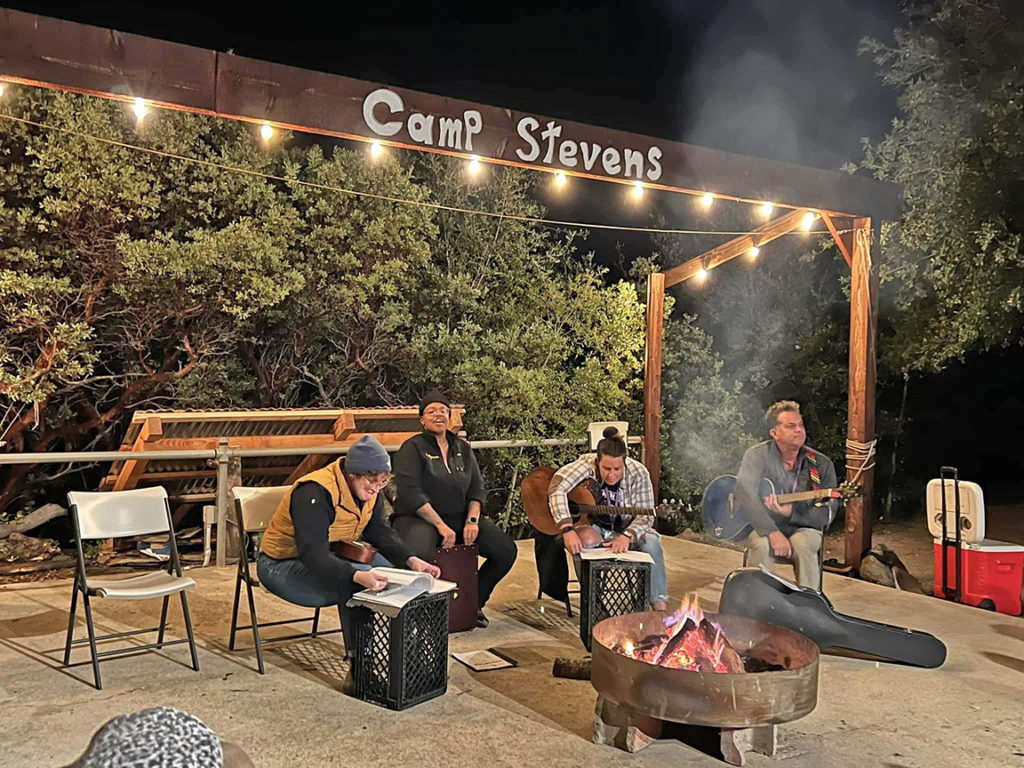 No Camp Stevens event would be complete without a campfire singalong, and the anniversary weekend was no exception. Camp Stevens photo

Camp Stevens, named for the Rt. Rev. Bertrand W. Stevens, second bishop of Los Angeles, was formally organized in 1952, and moved to its current home two years later. When the Diocese of San Diego formed in 1972, both dioceses continued to share the facility. Under the leadership of the late Peter Bergstrom, first resident director, programming expanded in the 1980s to include environmental education for school groups, ropes/challenge course teambuilding, family gatherings, organic gardening workshops, adult retreats, and off-site wilderness adventures in the high Sierra Nevada Mountains, Baja California and the Galapagos Islands.

By 2002, another 200 acres were purchased, adding space for hiking, exploration, and adventure. Five years later, the Angel Fire destroyed a dozen buildings on the campus, and severely burned 70 acres of forest. The camp continued operating while rebuilding, with the assistance of temporary yurt cabins and focused on sustainability including incorporating solar power, recycled carpet, and on-demand water heaters.

Bergstrom – named a canon of the diocese in 2000 in recognition of his long service to the camp – retired in 2012 and was succeeded by Beth Bojarski, who led the program until 2018, when she moved with her family to Cincinnati, Ohio, where her husband, the Rev. Mitch Bojarski, joined the staff of Church of the Redeemer. Wilder, a former camp operations director, was named interim director after Bojarski’s departure, and as executive director in January 2019.

“Camp Stevens has a legacy of wonderful leaders,” says McCarthy, canon to the ordinary; “Peter Bergstrom, followed by Beth Bojarski, and now with Kathy Wilder at the helm. Each made unique contributions to the development of this wonderful place and Kathy is now taking it to the next level. The retreat weekend with Valerie Kaur is one of many examples of Kathy’s visionary leadership. Camp Stevens is in good hands and great things are happening there.”