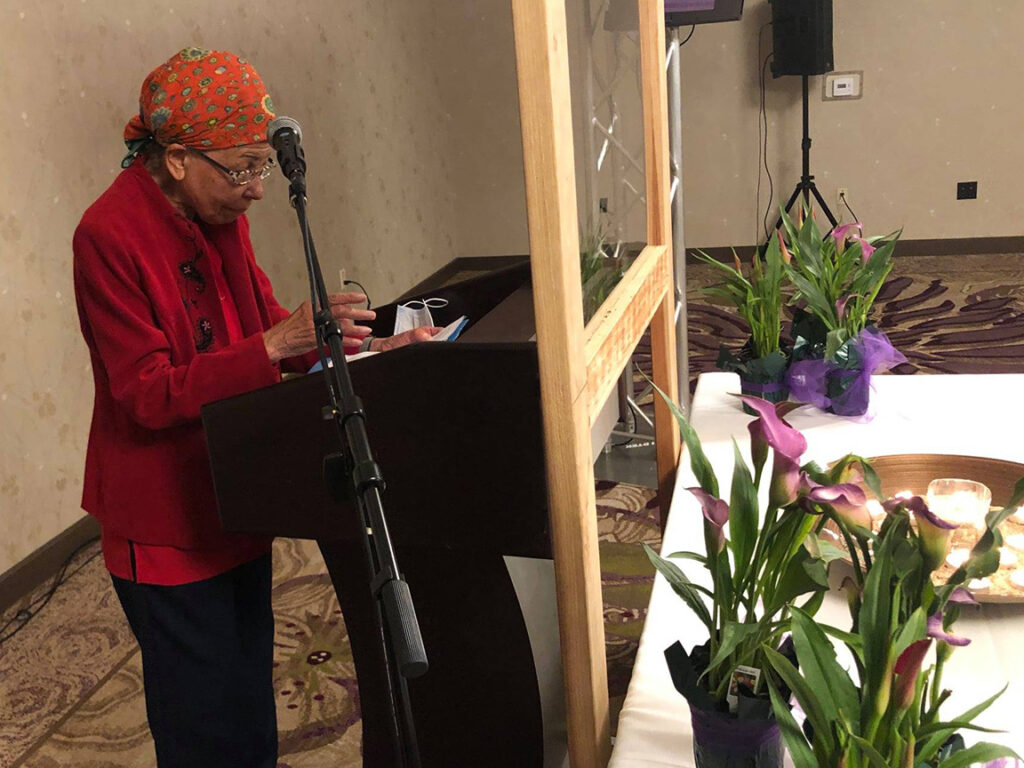 Allan Williams, a parishioner at St. George’s Church in Laguna Hills, wearing a dark hoodie, covered his head as he read “Hidden Weapon,” a poem by Jimmy Desire during “Lamentations for Racial Justice,” a multi-media ecumenical and interfaith vigil held April 25 at a hotel in Irvine.

Williams, 67, who is African American, said the poem hearkens to his deepest fears – and to those of Black parents across the United States – should their sons be stopped by police.

“I worry, because my son wears a hoodie,” Williams told The Episcopal News after the vigil. “I fear him ever coming in contact with police. This is my biggest fear. He is the best child you ever want to have, but he’s hearing impaired and if they ever pull him over, they might misconstrue that he’s ignoring them.”

With poetry, prayer, and music and prose, representatives of the three Abrahamic faiths came together to lament the sin of racism and to pledge to work for justice and reconciliation. 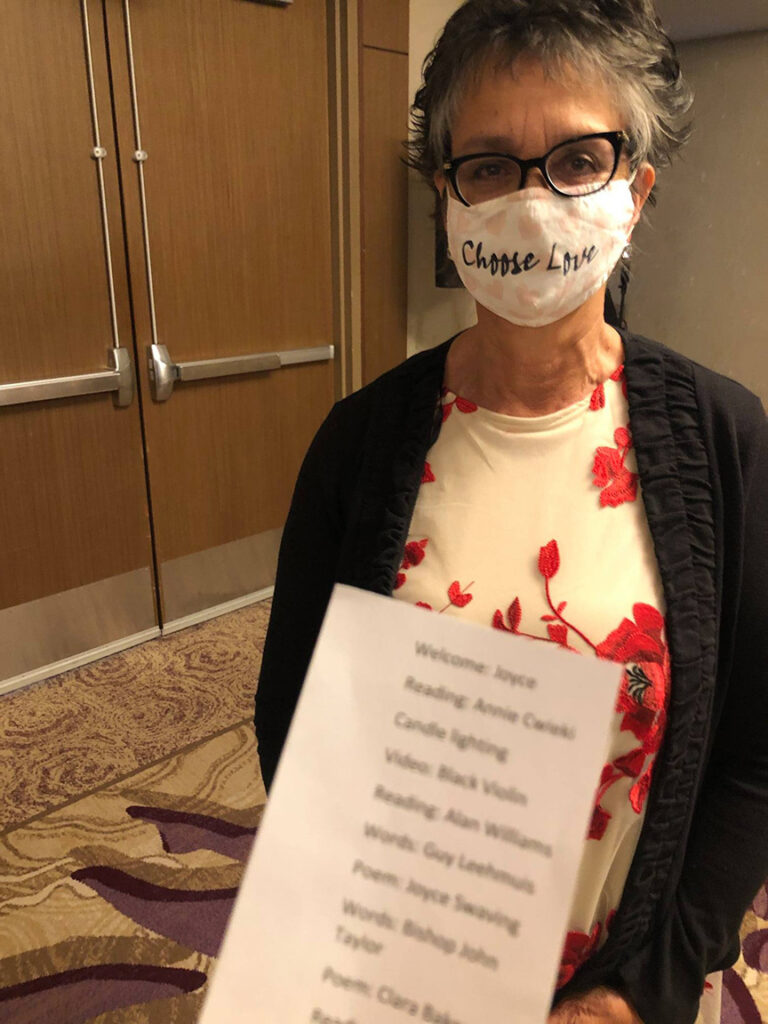 The event aimed to bring people of faith together to help “create a more compassionate and connected community,” said Joyce Swaving, the vigil organizer, who serves as St. George’s bridge-builder. She aims to build intentional community, a network “to support one another’s hope, trust and faith and strengthen common bonds of service and ministry,” she said.

“When we stand together in solidarity as a spiritual community to uphold the promise of racial justice, we truly become one body with the Divine,” she said. “As siblings, it is essential that we take the time to grieve the senseless loss of life by violence, while clinging to hope for freedom and justice for all.”

Los Angeles Bishop Diocesan John Harvey Taylor also addressed the gathering, noting that the vigil had been “arranged beforehand to be convened no matter what happened” in the trial of Derek Chauvin, the Minneapolis police officer who faces up to 40 years in prison for his role in the May 25, 2020 death of George Floyd.

A jury on April 20 found Chauvin guilty of second-degree unintentional murder, third-degree murder and second-degree manslaughter after deliberating for about 10 hours. A video captured by a witness showed Chauvin impassively kneeling on Floyd’s neck for 9 minutes and 29 seconds as Floyd gasped that he couldn’t breathe before going silent.

Taylor told the gathering of about 30 at the Doubletree Hotel that like many others after the verdict. he felt “lifted up by a long, gentle sigh of relief. But it’s just one step taken down a long road.” That road leads to finding ways to work together as people of faith to realize justice and equity for all people, he said.

Taylor cited the diocesan Bishop’s Commission on Gospel Justice and Community Care, led by Sister Patricia Sarah Terry, which will “assess the condition of the relationship between citizens and police and sheriff’s deputies and all of our communities.

“We want this work to be permanent work because these relationships are important … and we need to dig into it in 134 or more different jurisdictions.” (A video of Taylor’s remarks is here; a transcript is here.)

Terry was present at the gathering. “Whenever a community is impacted by tragedy or loss we need to heal before restoration can take place,” she said.

“A large part of the work of the Bishop’s Commission on Gospel Justice and Community Care is about healing – the healing of people, communities, bias, relationships, policies, and institutions. The vigil was a way to begin this process, by lifting up our concerns to God through reflection, prayer, poems, music, and the hearing of God’s Word. That is how it has always been done by human beings throughout the ages and we are no different.”

White people have work to do “when it comes to privilege and systemic racism in the Diocese of Los Angeles,” Taylor said. He referenced “My Work to Do,” an online anti-racism affinity group pioneered by Canon Suzanne Edwards-Acton, which is designed to aid white people in building stamina to have difficult conversations about race.

The Rev. Guy Leemhuis, who serves currently as a vocational deacon at Holy Faith Church in Inglewood, said that while white people must face up to the truth of their complicity in systemic white supremacy, it is incumbent upon all people to work together and to love one another, including “those folks with Confederate flags on their trucks” as well as the “Karens” of the world.

Karen is a pejorative slang reference for an obnoxious, entitled and often racist white woman who uses her privilege to get her way or to police others’ behaviors.

“We all need to stop saying, ‘I probably won’t see racism end in my life,’” Leemhuis told the gathering. “I say it and I need to stop. Because it limits our perspective about just how boundless God’s wonder-working power is.”
He added: “We are brothers and sisters in one human family. We lament about losses but we always have to have hope for the future.”

Iman Saymeh said it is incumbent upon everyone to learn one another’s stories. “That’s how we’re going to have justice in our society. The more that we individualize our experience, and we stay in our corner, we will never be able to understand people around us, unless we connect with them through the eyes and through the hands, and through the hearts.

“But that means the heart is centered to serve God. If your heart is God-centered it will be open to understand people’s stories. It’s not until you know people’s stories that you will embrace a difference in this society.”

“As a woman of color raising two boys in Orange County, where at times we are challenged with Islamophobia, and racism and prejudice, that verdict was for me, for my kids, for you, for our communities, for our society, for our country, for our humanity. As a Palestinian woman who is judged by her ethnic background … this was a moment of hope.”

Other speakers included Anne Cweika and Clara Baker, a retired educator and St. George’s parishioner, who offered a rousing and powerful rendition of the Maya Angelou poem, “A Brave and Startling Truth.” (The poem may be read here.)

Williams said that, unfortunately, seeing a young Black boy wearing a hoodie feels threatening to many. But, as the Jimmy Desire poem indicates, the challenge is to move beyond false stereotypes:

I am just a Black boy trying to survive
Trying to enjoy–just to stay alive
On the street
People judging me cause
The blackness of my skin
The types of clothes I’m in
Discrimination-Hidden Weapon
Unsuspecting Black child taunted, haunted…
Should I be judged or blamed for past generations?

Then blame me for…
The jazz of Louis Armstrong
The voice of Billie Holiday
The poetry of Langston Hughes
The photography of Gordon Parks
The character of Martin Luther King Jr.
The power of Coretta Scott King
The dignity of Frederick Douglass
Finally, the individuality of this Black man
You may seek evil in Blacks
The past has also proven a positive
A positive outcome
That helped the development…
OF OUR WORLD!!!