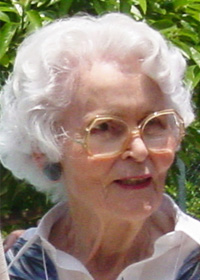 Alice Virginia Shepard D’Amico, wife of the Rev. Canon Samuel D’Amico, retired rector of St. James’ Church, Los Angeles, died on Oct. 15 at her home in Lake Forest. She was 97 and had been in poor health for several years.

Survivors include her husband of 68 years; their daughter, Ginger Conway; their sons Tony and Roberto; three grandchildren and three great-grandchildren.

Bishop Suffragan Diane Jardine Bruce will preside at a memorial service at 3:30 p.m. on Tuesday, Oct. 21, at St. George’s Episcopal Church in Laguna Hills, where Virginia had shared many years of ministry with her husband and where they attended church on Sundays.

Virginia Shepard was born Feb. 9, 1917 in Providence, Rhode Island where her father, a prominent local doctor and prominent church-goer, introduced her to Sam D’Amico. “Dad was working with the diocese in Christian education,” according to their daughter Ginger. They married in 1946 and a year later moved to Los Angeles and began ministry at St. Athanasius Church, Los Angeles, she said.

“She and Dad were just such partners; they were such an example of a partnership in marriage and dedicated to each other,” said their daughter Ginger Conway.

Virginia D’Amico loved to sing and was a well-known soprano. A devoted member of the Order of the Daughters of the King, she was a partner in ministry for her husband for many years, working alternately as an office manager, librarian, administrator, nurse – doing whatever was needed, according to her children.

That included serving at Holy Faith, Inglewood, and St. James, Wilshire (Los Angeles), where they started the parish school. They later worked for the Presiding Bishop’s Fund on World Relief, now known as Episcopal Relief and Development, at the Episcopal Church Center in New York.

The D’Amicos retired from the PBFWR and returned to Los Angeles, where they started St. John Chrysostom Church and School in Rancho Santa Margarita.

“I feel like my parents have had very peaceful and blessed life,” said Roberto D’Amico. “They have always been serving the Lord and they’ve always had a certain peace upon them that has taken them through every kind of trial and tribulation.”

Tony D’Amico agreed, saying that his parents “stood up for what was right in changing times and that was a challenge at times, understanding relationships among people and races.”

Memorial contributions may be made to St. George’s Academy, Laguna Hills.