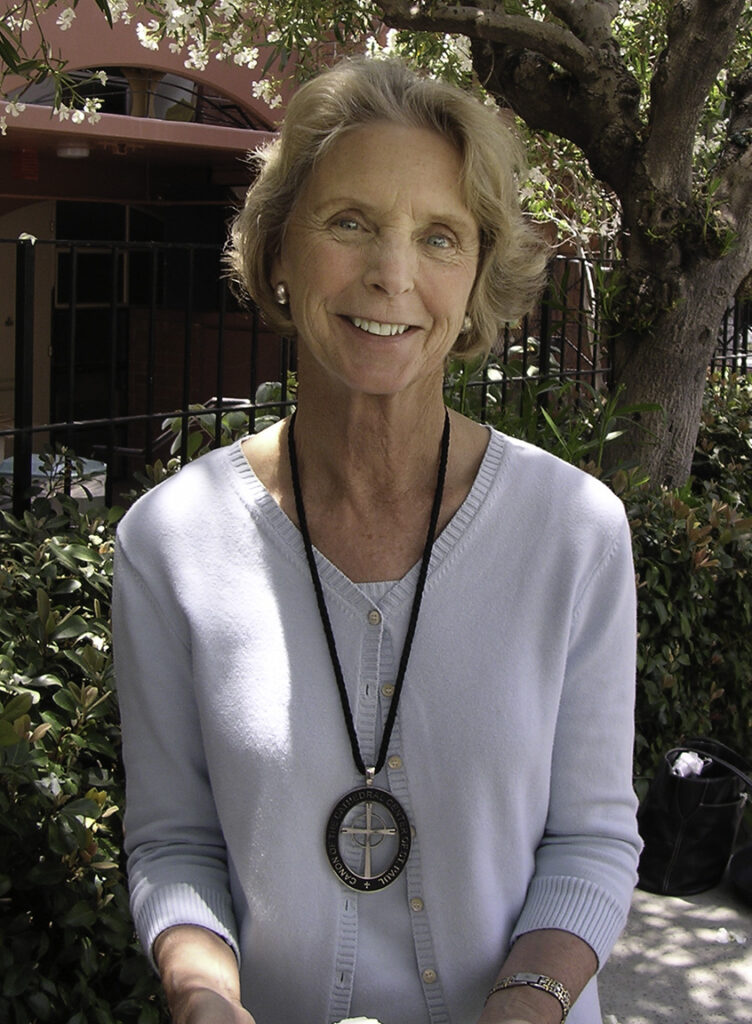 Barbara Borsch is pictured in 2004 after Bishop J. Jon Bruno named her an honorary canon of the diocese. Episcopal News file photo

[The Episcopal News] Canon Barbara Sampson Borsch – whose skills in advancing lay ministry, preparing clergy for ordination, educating youth at risk, and countering oppression of Palestinians were hallmarks of her work in the Episcopal Church and beyond – died peacefully in her sleep on Oct. 14. She was 84 and had been hospitalized with complications after a fall in her home in Gwynedd Township, Pa.

Borsch and her late husband, the Rt. Rev. Frederick H. Borsch, bishop of the Diocese of Los Angeles from 1988 to 2002, were devoted partners in life and ministry that included his years as parish priest, seminary dean, diocesan bishop, theologian, and author.

Predeceased by her husband in 2017, Borsch is survived by their sons and daughters-in-law, Benjamin and Jeannie of Tampa, Fla.; Matthew and Elizabeth of Millbrook, N.Y.; and Stuart and Fang Zhang of Worcester, Mass., and grandchildren Jack, Emily, Owen, and Zoe. Borsch is also survived by two sisters, Deborah Branch of Santa Barbara and Sarah Moody of Michigan City, Indiana, and their families.

Requiem Eucharist is scheduled for 11 a.m. ET (8 a.m. PT) on Oct. 30 at St. Martin in-the-Fields Church in Philadelphia. The service will be livestreamed on You Tube here. The family is planning an additional service in the Diocese of Los Angeles, likely next spring. At the family’s request, memorial gifts in lieu of flowers may be made to Church Divinity School of the Pacific, 2450 Le Conte Avenue, Berkeley, CA 94709. Cards and notes of condolence may be mailed in care of the Bishops’ Office, 840 Echo Park Avenue, Los Angeles, CA 90026, or emailed to bishopsoffice@ladiocese.org.

Los Angeles Bishop Diocesan John Harvey Taylor expressed gratitude for Borsch and extended condolences to her family and friends. “I remember Barbara as an equal partner with Fred in ministry, the gracious embodiment of a vision of fully empowered lay ministry for which we continue to stretch and grasp,” Taylor said of Borsch, who was among honored guests at his 2017 ordination and consecration to the episcopate and as one of her husband’s successors. “She offered our diocese and whole church a powerhouse trinity of empathy, expertise, and experience that was transformative, from Venice neighborhoods where children were at risk all the way to Israel and Palestine – also while personifying welcome, hospitality, and kindness.”

Los Angeles Bishop Suffragan Diane Jardine Bruce agreed. “Barbara and Fred Borsch were a dynamic, loving and engaging couple. It was always such a joy to be in their company,” Bruce said. “It is a sad day for the church in losing her, but her joining her love, our former bishop, will be a reunion of love and light in heaven.”

Retired Los Angeles Bishop Suffragan Chester L. Talton remembers Borsch as “a gracious lady who was devoted to the life of the diocese. I always felt, in our different roles, her companionship in ministry.”

Octavia Miles, a friend of Borsch for more than 50 years, describes her as “one of the most loving, caring, gentle, and sweet people anyone could ever know. I was very lucky to have her as my closest and dearest friend.”

Miles, who first met the Borsches in Chicago, encouraged them to join her as parishioners of St. Augustine by-the-Sea, Santa Monica. “We shared good times and bad times and always have been there for one another. I am sorry I have not been able to be with her during these recent days, though I was able to communicate with her and family members by phone.”

The Rev. Nathan Rugh, rector of St. Augustine by-the-Sea, expressed the parish’s sense of loss, yet also thanksgiving for Borsch’s active ministry, including her service on the vestry. “We deeply mourn Barbara’s death,” he said. “She was a vibrant part of our community for decades. Her warmth, grace and humor touched so many hearts and she will be profoundly missed.”

Following the bishop’s retirement, the Borsches continued to make St. Augustine their parish while dividing their time between their home in the Bel Air Skycrest section of Los Angeles, and Philadelphia where he was professor of Anglican studies at Lutheran Theological Seminary. In Philadelphia, they were active parishioners of St. Martin in-the-Fields, Chestnut Hill.

One of two archdeacons hired by Bishop Borsch at the start of his episcopate, the Rev. Canon Hartshorn Murphy later became rector of St. Augustine by-the-Sea. “I first met Barbara as the ‘bishop’s wife’ and an ever-gracious hostess,” he told The News. “But I did not know Barbara in her fullness until I went to St. Augustine’s as rector in 1997. What I discovered was a passionate Christian, a deeply committed member, a fierce defender of our Anglican identity, and a bold yet patient vestry member.

“But so much more significantly, Barbara was a natural evangelist,” Murphy added. “Any stranger foolish enough to enter the fitful space known as ‘coffee hour’ would soon be encountered by Saint Barbara who felt compelled to welcome that stranger with a natural grace. The hostess I took for granted at their home, I witnessed welcome others to God’s home – a seamless deal. Hospitality was Barbara’s charism. Barbara was the embodiment of Christ’s love – not the least a recipient was I and my family. Her smiles and laughter would say to everyone ‘welcome home, you are safe here,’ and now the heavenly host are blessed to echo that invitation to her.”

“People call me an ardent layperson,” Borsch told The Episcopal News in an interview following her husband’s 1988 election as fifth Bishop of Los Angeles. “I believe in lay ministry and the vocation of all the baptized.”

At that time, she served on the staff of the Diocese of New Jersey, guiding aspirants to ordination in a strategic formation process – including the “Ministry Study Year” concept – that she developed in consultation with then-Bishop Melick Belshaw, and then continued as a longtime member of the Episcopal Church’s Board of Theological Education.

During these years in New Jersey, Fred Borsch was dean of the chapel and professor of religion at Princeton University, his alma mater, a position he accepted after serving from 1972 to 1980 in Berkeley, Calif., as dean and president of Church Divinity School of the Pacific, which Barbara Borsch later served as a member of the board of trustees. 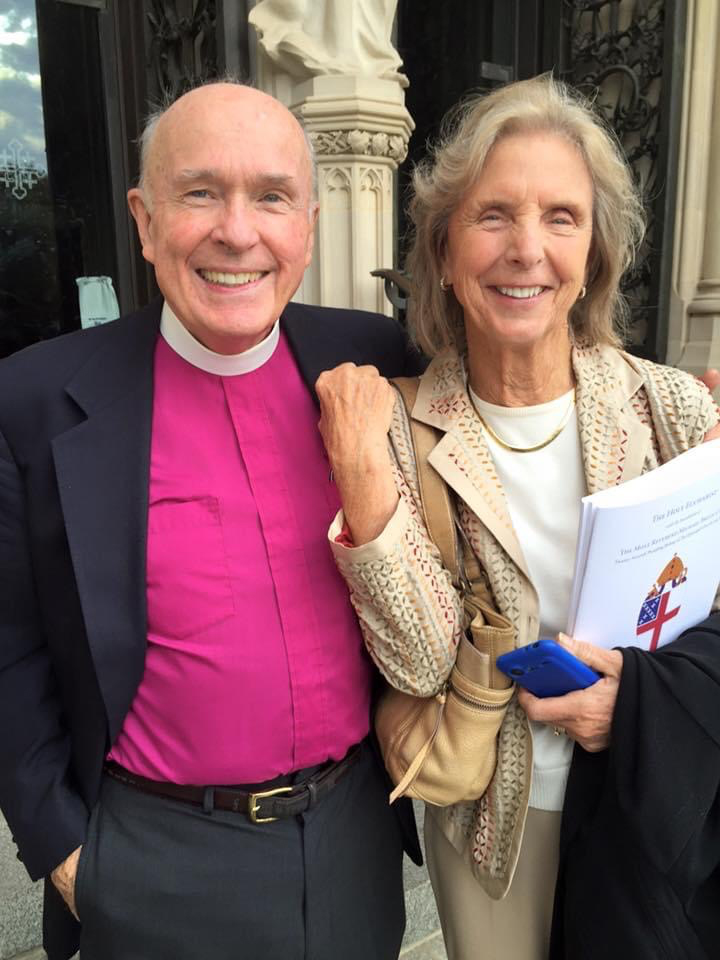 While residing in Berkeley, Barbara Borsch became a counselor in a residential facility for adolescent girls whose life circumstances had caused them to be placed as wards of the court. To assist her in this work, Borsch took psychology classes at U.C. Berkeley. When the facility closed, she earned a certificate in legal studies from Mt. St. Mary’s College in Moraga and, as a specialist in writing wills of trust, worked in a firm handling estate law.

Her commitment to adolescents at risk emerged again in Los Angeles where she served as president of the Friends of the Neighborhood Youth Association, a diocesan institution established in 1906 and specializing in 100% college placement for students of low-income backgrounds.

“I like working with NYA for a variety of reasons,” she told The Episcopal News in 1998. “It is a splendid opportunity to put some energy into work that is specifically focused, and here is an area in which my own interest parallels one of Fred’s areas of focus within the diocese, that of support for youth and their education.”

After graduating from Sweet Briar College in Virginia and earning a master’s in English Literature at Johns Hopkins, Barbara Edgeley Sampson began her professional career as a high school English teacher in her native Chicago, where she had grown up being interested in her father’s career as a commercial and industrial real estate developer. “I really grew up in the city, and I had a sense of urban situations and tensions,” Borsch said in 1998. Her mother, who excelled in intellectual pursuits, was from a family that included notable academics.

Later, Borsch attended high school in Oak Park, Ill., as did her future husband, though they did not know each other at that time, he being a few years ahead of her. They met after she graduated from college and he had completed post-graduate studies in Oxford. Married in 1960, they continued to reside in Oak Park where she taught English and he was curate at Grace Church.

The Borsches’ first son, Benjamin was born in Oak Park, and twin sons Matthew and Stuart were born two years later in England while their father was teaching at the University of Birmingham.

Both Barbara and Fred Borsch said these years in England contributed significantly to formation for future experiences – theological and institutional – with the Anglican Communion, in which they came to work closely with Archbishop of Canterbury Robert Runcie and his wife, Rosalind, and later their successors, George and Eileen Carey, welcoming both couples on visits to Los Angeles.

The Borsches were active in two Lambeth Conferences, 1978 and 1988, he in the latter year as a major section leader, and she in both years with the Spouses Conference. “With the spouses one finds the pulse of the church, the pulse of the Anglican Communion. Participation is a very rare prize,” she said in 1998 comments on the conference.

Her international interests included special focus on the Middle East. She was for many years a board member of the North American Regional Committee for St. George’s College, Jerusalem, traveling there on notable occasions with her close friend Patti Browning, wife of then-Presiding Bishop Edmond L. Browning. Their visits included a 1989 churchwide fact-finding trip with stops in Gaza, Jordan, and refugee camps among other sites.

“The Israeli/Palestinian conflict and peace talks do not and will not exist in isolation from history. As taxpayers and friends, we have been involved in this context,” Borsch wrote in a 1991 op-ed article commenting on related deliberations and legislation of the General Convention that year. “Episcopalians have been involved in this context for some time. We have a close ‘special’ relationship with Israel under which it receives our largest foreign assistance package … The United States has trusted that Israel will comply with all the terms of the Foreign Assistance Act of 1961 … Also, the relationship assumes that Israel will not act in violation of U.S. foreign policy forbidding further development of Jewish ‘settlements,’ or new towns, in Palestinian territory. No matter what the rationale, this is seen as ‘de facto’ annexation of the land and a major obstacle to peace.”

Calling the church to deepened awareness and prayer, Borsch concluded, “Ultimately, only all of the parties involved can assure themselves of the future, the justice, the peace and prosperity they all deserve. But if the United States can make negotiations a preferable alternative to the present situation, then Episcopalians need to support those who can begin the process. Retreating into a ‘neutrality of silence’ in order not to offend anyone is not a sign of love.”

“Remember what it took to build it? People said it couldn’t be done, but now think of its success,” she said in 1998. “When it was finished, it was as if we had acquired a new house. We went around exploring it, looking in and out all the windows, in the closets, seeing what our new house is going to be like, just like a family would do figuring out whose room is going to be whose, and so on.” Likening the center to “a family home,” Borsch said, “I’m glad I lived here at the time that this was happening. I count it in the privilege category of experiences.”

— Robert Williams is diocesan canon for common life. As diocesan communications assistant and then director, he served in ministry with the Borsches from 1988 to 2002.

This story was updated on Oct. 28, 2021 with a livestream link for Barbara Borsch’s funeral service on Oct. 30.