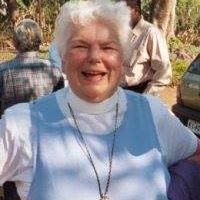 Services will be held at St. Mary’s, with reception and refreshments to follow in the Guild Hall. Valet parking will be available.

She is survived by her sons, James Mudge and Steve Mudge, and her daughter Suzanne Mudge; and six grandchildren. Her husband of 61 years, John Leonard Mudge, died in 2012.

She also assisted from 1984 to 1986 at St. Mary’s Church, Laguna Beach and was chaplain at South Coast Medical Center. During her tenure in Simi Valley, she was chair of the Simi Valley Interfaith Coalition for the Homeless and Needy and was president of the Southern California Ecumenical Council from 1994 to 1995. Bishop Fred Borsch named her a canon of the Cathedral Center of St. Paul in 1993. After moving to Oregon, Mudge was vicar of St. John by-the-Sea Church in Brandon from 1999 to 2006, serving as ecumenical coordinator for Province 8 from 2002 to 2004, and in several capacities for the Diocese of Oregon, including ecumenical officer and judge of the ecclesiastical trial court. She was chaplain to the board of Church Periodical Club from 1997 to 2003.

Barbara Duffield Covington was born Sept. 27,1930 in Laguna Beach and earned a bachelor’s degree at Occidental College. She was a teacher for many years before entering seminary at Bloy House, the Episcopal Theological School at Claremont. Bishop Robert C. Rusack ordained her to the diaconate in 1982; Bishop George W. Barrett ordained her to the priesthood the following year.