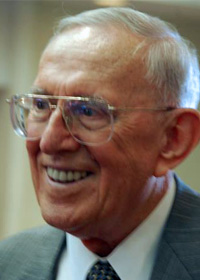 The Rev. Dr. Colin Brown passed away peacefully at home in Altadena on May 4, 2019, age 87, surrounded by his children, closest friends, and dedicated care-givers.

He came to the US in 1978, serving as professor of Systematic Theology at Fuller Seminary, Pasadena, until 2010, rising to associate dean for Advanced Theological Studies in 1988. During this time, he also served as associate priest at Saint Mark’s Episcopal Church, Altadena, until his recent illness.

He was the author of many scholarly articles and books including “Miracles and the Critical Mind” and “Jesus in European Protestant Thought.” He gained recognition for editing “The New International Dictionary of New Testament Theology,” and received numerous honors and awards, including first place on the Critics’ Commended List of Books in the LA Times. Colin continued his research and writing up until shortly before his death. His most recent book focused on “Quests of the Historical Jesus.”

A humble and gentle man, he leaves an extensive academic legacy and was revered by his students, colleagues and friends alike. In addition to being passionate about his preaching, research and teaching, he was a keen rose grower, gladly sharing his broad knowledge of roses with others.

His children would like to thank the many friends who helped him through the last months of his life, especially Nancy and George, Joanne and Jim, Dr. Mary, Brenda, and his recent care givers, Clifford and Menchu. Sincere thanks also to the Rev. Carri Patterson Grindon and the Rev. Betsy Hooper-Rosebrook, his dear colleagues in ministry, and the parishioners of Saint Mark’s Church, for their friendship, love and support.

Colin was predeceased by his second wife, Olive, and is survived by his first wife, Sylvia, and their children, Verity (Philip), Matthew (Caroline) and Stephanie (Graham), and five grandchildren. A memorial service was held at Saint Mark’s Church, on May 13, 2019. Memorial contributions may be made to Saint Mark’s Church.