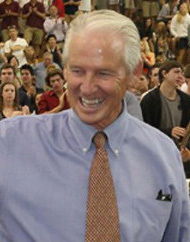 Boyle, who retired in 2012 as associate headmaster, joined St. Margaret’s as a faculty member in the fall of 1980, the second year of the school. He taught math, science, sacred studies, physical education, and coached the first two interscholastic sports, soccer and golf. When grade 9 was added in 1982, he also taught algebra and coached basketball.

Survivors include his wife Marilynn, also a former faculty member at St. Margaret’s; their son Michael and daughter-in-law Rebecca; and granddaughter Lyla.