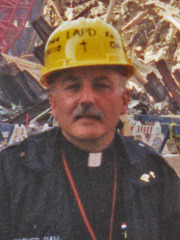 David Edward Bowser is pictured at the site of the World Trade Center, where he served as a chaplain after the terrorist attacks in 2001.

The Rev. David Edward Bowser, once rector of St. Margaret’s Church, South Gate, died on April 13. He was 58. Medical evidence indicates that he took his own life.

Survivors include Bowser’s wife, Mary Ann Newfield-Bowser, and his sons from a previous marriage, Michael and Stephen.

In recent years, Bowser had served as an assistant at Trinity Church, Redlands, and at St. Michael’s Church, El Segundo. He came to the diocese in 1991 from the Diocese of El Camino Real as rector of the South Gate parish, but was inhibited in 1994 and reinstated after a three-year period.

Bowser served for many years as a chaplain at hospitals and police departments, including the Rampart and support divisions of the Los Angeles Police Department. He spent some time in New York doing chaplaincy work at the site of the World Trade Center after the September 11, 2001 terrorist attacks. He received several citations and awards for his chaplaincy work.

Before coming to the Diocese of Los Angeles, Bowser, who was fluent in Spanish, was rector of a parish in Venezuela, and curate of St. George’s Church, Salinas. Before his ordination, he was a missionary in Ecuador through SAMS (South American Missionary Society of the Episcopal Church).

In earlier years, he was a counselor, specializing in alcoholism issues, and a police office and police academy instructor in Washington, D.C.

At various times he served on advisory boards of the Salvation Army and an AIDS center. He was an aircraft pilot, a Cub Scout leader, and a member and officer of the Jaycees and Elks clubs.