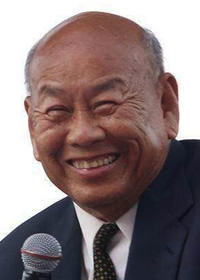 The Rev. Duc X. Nguyen, founding vicar of the Church of the Redeemer in Garden Grove and a prominent leader in Southern California’s Vietnamese community, died Nov. 5 in Vietnam, where as chairman of the Vietnamese World Christian Fellowship he had traveled to coordinate and speak at a gathering celebrating the 500th anniversary of the Prostestant Reformation. He was 76.

Nguyen was the first Vietnamese priest in the Anglican Communion, ordained in the Diocese of Los Angeles in 1984 by Bishop Robert C. Rusack. He served at Church of the Redeemer from 1985 to 1992; later he was director of Indochinese ministers for World Vision.

Duc Xuan Nguyen was born on October 28, 1941 in Duc Pho, Mo Duc District, Quang Ngai Province. He earned a bachelor of arts degree at the University of Saigon in Vietnam, and a master of divinity degree at Golden Gate Baptist Theological Seminary. He also received a master’s degree in library science from City University of New York, and a doctorate from Drew University.

Survivors include his wife Thuan, whom he married in 1977; his sons Daniel and Samuel, and daughter Elizabeth; four grandchildren; four of his five brothers, including the Rev. Hong X. Nguyen, who also served at Redeemer; and two sisters.

Services were held on Nov. 18 at Garden Grove United Methodist Church; he was interred at Rose Hills, Whittier. An obituary written by Nguyen’s family is here.