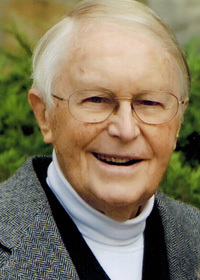 The Rev. Edward Powell Allen, a former rector of St. Andrew & St. Charles Church, Granada Hills, died July 9 in Hingham, Massachusetts. He was 88, and had been in ill health for about the past year.

A funeral service was held at St. John’s Church, Hingham, Massachusetts, on July 19. His ashes were interred in the church’s memorial garden. According to Alice Allen, a Dixieland band played during the procession from church to garden, at her husband’s express request. The sermon delivered at the service by St. John’s rector, Tim Schenck, may be read here.

The Allens moved to Mashpee, Massachusetts, on Cape Cod, building their retirement house there. Ed assisted at the nearby congregations of St. Mary’s Church, Barnstable, and St. Barnabas, Falmouth. They moved in 2007 to a retirement home in Hingham.

Ed was called as rector of St. Charles’ Church, Northridge, in 1976, and presided over its merger with St. Andrew’s Church, Granada Hills, in 1978. Alice was the church organist, and at their retirement party in January 1991, according to an Episcopal News article at the time, she commented, “This mom-and-pop-shop operation has been such a happy one … I would even suggest that when you interview a prospective new rector you ask her if her husband plays the organ.”

His favorite phrase during his ministry was: “God is good, and we were put here to care for one another.”

“Ed loved his 10 years in the campus ministry at UC Irvine, and evidently he was equally appeciated by the students and faculty he worked along with,” Alice Allen wrote after his death. “The parish ministry he went back to was equally satisfying to him. He told us all that St. Andrew & St. Charles Church was the type of parish he always dreamed of having: a shared ministry made up of great leaders — and followers — and a parish with a real sense of mission outside the parish.”

In addition to his parish work, Allen was at various time involved in the diocese’s Christian education, youth, and school programs. He was president of the Newport Harbor Council of Churches in 1963, and a member of the Orange Coast Civic Association, (which he described as “a male League of Women Voters”). He also wrote opinion articles for The Episcopal News, and contributed to Speak Boldly, a 1979 collection of sermons on human sexuality collected and published by the Program Group on Christian Social Relations.

In 1963, while he was at St. Michael’s, Allen took part in a civil disobedience action protesting a new housing development that discriminated against people of color. He was arrested and spent six hours with 23 other protesters in a crowded cell before being bailed out. According to a newspaper report on the incident, “[H]is congregation responded enthusiastically Sunday morning when he reported on his weekend activities.”

Ed Allen was born Jan. 18, 1928 in Shanghai, China, the son of Episcopal missionaries Arthur and Netta Allen. As conditions became more dangerous for Westerners, the U.S. State department ordered all dependents out of the country, and Ed’s parents, wishing to continue their ministry, sent him to live with a foster family in Oakland, Calif. He didn’t see his parents again until he was already attending Pomona College in Claremont. Graduating from Pomona in 1949, he began a career in social work, which was interrupted by military service; he was a corporal in the U.S. Army’s intelligence service. After discharge, and after another year in social work, he discerned a call to ordained ministry and entered CDSP. He graduated on June 15, 1956, and on the next day married Alice, daughter of an Episcopal priest and a graduate of William Smith College. He was ordained a deacon the following week by Bishop F. Eric Bloy, and as a priest on Feb. 11, 1957 by Bishop Donald Campbell.