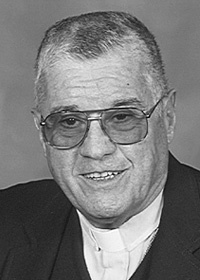 The Rev. Enrico Mario Gnasso, assistant at Grace Church, Moreno Valley, died March 23 after an extended illness. He was 88.

Survivors include Enrico’s wife, Edith Marvin Luisa; a sister; two children; and four grandchildren. A daughter and a grandson predeceased him.

Prior to his retirement in 1993, Fr. Gnasso was priest-in-charge of St. Martin in the Fields Church, Twentynine Palms (1991 – 1993) and St. Christopher’s Church, Trona (1987 – 1991), now closed. Previously he served at churches in Wisconsin and Nebraska, and was burser at Bexley Seabury seminary in Chicago, Illinois.

Born in Fort Lee, New Jersey, December 18, 1928, Fr. Gnasso earned a bachelor’s degree in business administration from Pace University in 1955 and worked as a CPA in Washington State. In 1964 he received a bachelor of divinity degree from Seabury-Western Theological Seminary, followed by a master of science degree from the University of Wisconsin in 1971. He was ordained to the diaconate in June 1964 and to the priesthood the following December.