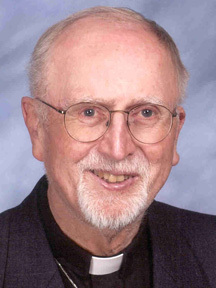 The Rev. Forest O. “Frosty” Riek, Jr., whose longtime ministry in the Diocese of Los Angeles included some 25 years as priest at St. Stephen’s Church, Hollywood, after some years as an active lay leader there, died on August 15. He was 80.

A memorial service will be held at the Chapel of St. Simon and St. Jude at the Scripps Kensington, 1428 South Marengo Avenue, Alhambra, at 1 p.m. on Saturday, August 22.

After his 1998 retirement from St. Stephen’s, Riek assisted at the Chapel of St. Francis in Atwater Village.

Riek had a unique ministry at St. Stephen’s, where he valued his role as “worker priest” while also employed at Lockheed as an engineer and research specialist. He was ordained to the priesthood by Bishop Eric Bloy in 1973 after completing seminary studies at the Episcopal Theological School at Claremont.

The dedicated ministry that the Rieks shared at St. Stephen’s made it possible for the parish to continue without a full-time rector during years when the congregation’s priorities included various community outreach activities. During Frosty Riek’s tenure as “liturgical authority,” St. Stephen’s began to host the Korean-language services of the St. Nicholas Congregation. Spanish-language services followed later at the parish.

St. Stephen’s Church was founded in 1904, and the Rieks were involved in its ministry from its early years in L.A.’s Colegrove area before construction of a church on what is now Hollywood Boulevard, and completion of the present church on Yucca Street. Until they moved to the Scripps Kensington early in 2009, the Rieks were longtime residents of the Los Feliz district of Los Angeles.

Forest Riek was born Sept. 1, 1928 in Rhinelander, Wisconsin. In Los Angeles he earned a bachelor’s degree in engineering from the University of Southern California.

Among his assignments at Lockheed, Riek was a test engineer at Rye Canyon and was active with such projects as Integrated Systems Testing of the L-1011 Tristar aircraft. He taught navigation courses as a past captain in the U.S. Coast Guard Auxilliary, and he was a leader on the district committee for Cub Scouts in the Hollywood-Wilshire area.