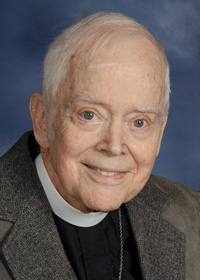 George Luthringer III was born on May 30, 1934 in Springfield, Illinois, the second son of Martha Eleanore Glandon and Marshall Sampsell Luthringer. After his childhood in Beardstown, Illinois, Luthringer’s family returned to Springfield as he was preparing to enter high school. After graduation he attended M.I.T., where he earned bachelor’s and master’s degrees in mechanical engineering in 1957. Following a year in a doctoral program, he entered the U.S. Air Force, where he spent three and a half years as a research engineer at Wright-Patterson AFB, at the same time playing a major role in the life and development of St. Christopher’s Episcopal Mission in Fairborn, Ohio.

Luthringer enrolled at Church Divinity School of the Pacific, where he met and married his first wife, Jean Ann Yeilding, in 1965. Graduating with honors in Bible and church history, he returned to the Diocese of Southern Ohio, where Bishop Roger Blanchard ordained him to the diaconate in June 1966 and to the priesthood in December of that year.he was put in charge of two small churches along the Ohio River on the western edge of Cincinnati.

After three years there he spent a year studying Group Communications at the University of Cincinnati and afterwards taught mathematics at two private schools in Cincinnati for seven years. He then founded the patient relations program at Cincinnati General Hospital, ultimately becoming director of the patient relations department at the University of Cincinnati Hospital. During that time he met and married his second wife, Beatrice Ann Mertens (nee Pentecost), completed intensive and advanced Bioethics courses at Georgetown University, and twice served as president of the board of the Ohio affiliate of the National Abortion Rights Action League. Later he became a consultant in medical ethics, also twice teaching that subject to pre-med students at Miami University (Ohio), and continued to do ad hoc technical editing as well as publishing articles supporting the morality of a woman’s right to choose abortion and examining the ethical issues in providing enteral and parenteral feeding of those very ill patients who might benefit from nutritional support.

Moving to California in 1991, he assisted at St Francis of Assisi Church in Simi Valley for 10 years, before spending 10 years as the assisting priest at St. Columba’s in Camarillo until illness prevented him from further work. Over that period he served six years on Diocesan Council and played a key role in ensuring the survival of the Samaritan Center, a day-care and support facility for the homeless in Simi Valley. He also served for many years as a mentor to Education for Ministry students.

In lieu of flowers, contribution are suggested to El Hogar Ministries (an Episcopal institution providing education for some of the most desperate children in Honduras) at ElHogar.org, or to the Samaritan Center, 280 Royal Avenue, Simi Valley 93065.