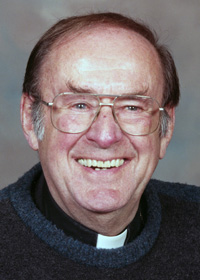 After retiring from St. Peter’s, he served from 2002 to 2007 at St. James’ Church, Birstwith, North Yorkshire, England.

During his tenure at St. Peter’s he was active in the local community, serving as human resources commissioner for Santa Barbara County. He was on the local hospice board and the bio-ethics board for Santa Maria Valley Community Hospital. He also took an active role in the Good Samaritan Shelter. He enjoyed local cultural events such as theater, music and art exhibits, as well as golfing, cooking and travel.

Born April 26, 1929 in Casper, Wyoming, Mackey earned a bachelor’s degree at the University of Nebraska in 1958 and worked in the petroleum industry and in retail. He completed a master of divinity degree from CDSP in 1966 and was ordained by Bishop James Hunter in Wyoming that same year.