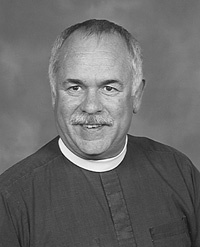 Survivors include his wife, Yvonne Leatherwood Asbury, whom he married in 1984, and their children Courtney and Forrest (Tyler).

A funeral service will be held at 11 a.m. on Monday, March 23, at St. Alban’s Episcopal Church, 580 Hilgard Avenue, Westwood (Los Angeles). The Rev. Susan Klein will celebrate, and The Rev. Jim Newman will preach.

Asbury served most recently as assistant at St. Bede’s Church, Mar Vista (Los Angeles). He previously was an interim rector at Christ the Good Shepherd Church and Church of the Advent, both in Los Angeles, in addition to his 18-year tenure as chaplain for the Canterbury Westwood Foundation at UCLA, where he also was program chair of the University Religious Conference from 1983 to 1987.

Before moving to the Diocese of Los Angeles, Asbury was a chaplain at the Cathedral School for Boys in San Francisco and at Iolani School in Honolulu.

He was involved in higher education ministries for the wider Episcopal Church, including stints as member and officer of the Episcopal Society of Ministry in Higher Education from 1980 to 2000. He also served as executive director of Province VIII from 2000 to 2006.

At the 1984 Olympic Games in Los Angeles, Asbury served as religious services coordinator and Episcopal chaplain He was the author of several books, including To Tell of Gideon: Storytelling in the Church and Why the Possum’s Tail Is Bare & Other Southern Classics.

Asbury was born in West Virginia on December 14, 1947. He studied at Hampden-Sydney College, Virginia, and earned a baccalaureate degree at the University of the South, and a master of divinity degree at Church Divinity School of the Pacific in 1973. He was ordained a deacon on June 23, 1973 and a priest on Dec. 1, 1974 in the Diocese of California.