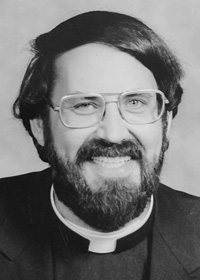 The Rev. James Byron David Corbett, once rector of St. Andrew’s Church, Ojai, and a former diocesan archivist, died May 21 in Portland, Oregon, where he had lived since his retirement in 2008. He was 80 and had been in ill health for some time.

Service arrangements are pending. Corbett’s ashes will be interred in the columbarium at St. Andrew’s – which was built during his tenure at the parish – in a private service at a later date.

Corbett was called as rector at St. Andrew’s in 1977 and served there for 17 years. During his ministry there, Rosales Organ Builders installed a custom pipe organ, which was played at services by Karen Corbett, an accomplished performer and music teacher.

Before beginning his rectorship at St. Andrew’s, Corbett previously was priest-in-charge at St. John’s and Holy Child Church, Wilmington; assistant priest at St. Mary’s Church, Laguna Beach priest-in-charge at Grace Church in Lake Havasu City, Arizona; and curate at St. Patrick’s Church and Day School. Over the years Corbett served on several diocesan committees and boards, including the Camping Commission, a board of directors for Camp Stevens (1969 – 1973); the Program Group on Liturgy & Church Music (1973-75 and 1978 – 82); and LAD/EAST, which oversaw Asian ministry in the diocese.

Bishop Frederick H. Borsch appointed Corbett, a lifelong history buff, as historian and archivist of the Diocese of Los Angeles late in 1991. Corbett served in that position until 1998. In an Episcopal News article announcing Corbett’s appointment, the new archivist said, “We’re so spread out that our stories, the stories of the church in this place, don’t get told. The history of the diocese is our history. We need to tell these stories and remember them.”

“He loved doing that,” his wife recently told The Episcopal News.

After his departure from St. Andrew’s in 1994, Corbett served as an interim priest for congregations in Washington (state), Yreka (California), Michigan, Indiana, Wyoming, Ohio and Utah. Upon his retirement from interim work, he and his wife moved to Portland, where he attended and assisted at All Saints Church.

James Corbett was born Oct. 29, 1940 in Indianapolis, Indiana. When he was 13, his family moved to California, where he finished school. He earned a bachelor’s degree in international relations at USC in 1963, with the original intention of entering the foreign service. Discerning a call to ordained ministry, he began his studies at Virginia Theological Seminary and completed a master of divinity degree in 1968 at Philadelphia Divinity School (which later merged with Episcopal Divinity School). Bishop F. Eric Bloy ordained him to the diaconate Sept. 7, 1968 and to the priesthood Aug. 3, 1969.