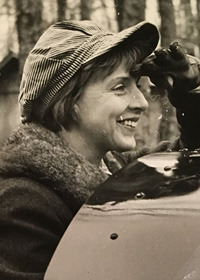 Jean Sharley Taylor Lescoe, retired associate editor of the Los Angeles Times and member of All Saints Church, Pasadena, died Oct. 10. She was 91.

Lescoe, who used the name Jean Sharley Taylor professionally, assisted the Diocese of Los Angeles and wider Episcopal Church as a two-time judge of the Episcopal Communicators’ Polly Bond Awards, serving with other Times section editors and with representatives of the Academy of Television Arts and Sciences. She also served on the vestry at All Saints Church. During her early career in Detroit, she edited the newspaper of the Diocese of Michigan.

A celebration of her life will take place at 10:30 a.m. on Saturday, April 16, 2016 at All Saints Church, 132 N. Euclid Avenue, Pasadena 91101. Memorial contributions may be made to the rector’s discretionary fund at All Saints.

Taylor came to The Times in 1971 as women’s editor and later edited the View section. Named associate editor in 1975, she presided over the creation of a number of sections, including daily Calendar, the Book Review and the Los Angeles Times Magazine. During that period, the Times won three Pulitzer Prizes for arts coverage. For many years, she was the only woman named on the newspaper’s masthead.Taylor was the recipient of numerous awards, including the 1988 Women Behind the News Award from Women in Communications and the Penney-Missouri Award for features editing. She also has been a Pulitzer Prize juror and member of the Southwest Committee of the Rhodes Scholarships. Before coming to Los Angeles, Taylor was associate editor of the Arizona Republic and also had worked as a reporter for the Detroit Free Press.

A full obituary from the Los Angeles Times is here.