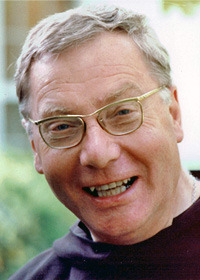 Brother Derek of the Society of St. Francis, a friar at the St. Francis Friary at Church of the Epiphany, Lincoln Heights (Los Angeles), died Sept. 5. He was 83, and had received a diagnosis of terminal cancer only 10 days before his death.

In addition to Brothers Ambrose Cristosal and Antonio at the friary, survivors include his brother and sister-in-law, John and Kathleen Ford, residents of the United Kingdom.

Requiem Eucharist will be held on Saturday, Sept. 19 at 4 p.m. at the Church of St. Mary of Palms, 3647 Watseka Avenue, Los Angeles 90034. Brother Jude Hill, SSF minister provincial, will be the celebrant, with the Rev. Vincent Shamo, rector of St. Mary’s, and the Rev. Thomas Carey, vicar of Church of the Epiphany, as concelebrants. Tom Carey also will be the homilist. (Clergy: white stoles.)

Brother Derek lived in a number of Franciscan houses in his native England, the United States and Trinidad and Tobago. He held many offices in the society, including a period as general secretary.

He was ordained a deacon on Dec. 20, 1958 and to the priesthood on Dec. 19 of the following year in Llandaff Cathedral by Bishop William Glyn Hughes. Derek then served as a curate at Saint Martin’s Church, Roath, and the parish church of Newton Nottage in Wales. Following his curacy he became the vicar of Abercanaid.

Discerning a call to religious life, Derek explored his vocation at the Benedictine Monastery of the Order of Saint Paul at Alton in Hampshire, England, before choosing to join the Franciscan order, with its balance of prayer and active service. He was received as a postulant in May 1972, and was clothed a novice the following August, taking the name John Derek. He was professed in July 1974 and life professed in July 1978.

During his time in community he lived at the friary in Dorset and then at Alnmouth in the North East of England. In 1981 he moved to the priory in San Francisco, where he became Novice Guardian, caring for new people who came to join the community. While in San Francisco he, along with other Franciscan brothers, became a chaplain at the city and county jails; according to his brothers, he was so influential that former prisoners still ask about him.

In 1991 he moved to Brooklyn, New York, to become chaplain at Goldwater Memorial Hospital, where he served for 10 years as an integral part of the chaplaincy team, which included Roman Catholic Jewish members.

According to a biographical sketch written by his brothers, “One of Derek’s great gifts was that whenever you were with him you felt the most important person in the world, and all the people who were neglected and rejected felt they had met someone who really cared about them – and he did.”

Derek lived in other houses, helping them become ‘community’ places: Berkeley, California; Little Portion, Long Island (New York), and finally Los Angeles. He especially loved his stint in Trinidad and Tobago, and frequently spoke of returning there. He became a United States citizen in 2013.

He was a named a chaplain of the Most Venerable Order of the Hospital of Saint John of Jerusalem, a royal order of chivalry established in 1831 whose members work to prevent and relieve sickness and injury, and to act and enhance the well being of people throughout the world. He also was a freeman of the City of London, and received many civil and church citations for his work among the poor and needy.

“Derek was a man of prayer,” wrote his brothers. “He was committed to reciting his office four times a day, no matter where he was or who he was with, and he was committed to his times of prayer. He always found time to pray, to continually turn his life towards God, and to laugh. Humor was a part of the divine for Derek and he could laugh at himself and with other people.”