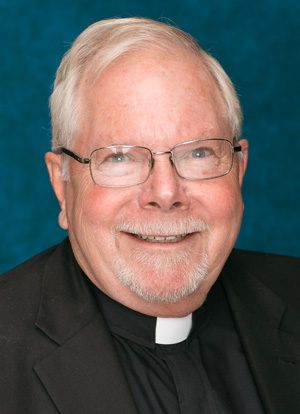 [The Episcopal News] The Rev. John William Conrad, D.Min, rector of All Saints’ Church, Riverside, from 2008 to 2018, died Jan. 16 of pancreatic cancer. Though he and his wife, Shannon, had recently divided their time between homes in Michigan and Mexico, he passed away in Riverside during a holiday visit.

Bishop John Harvey Taylor will preach at a service celebrating his life, witness and vocation at 11 a.m. on Saturday, Feb. 4 at All Saints Church, 3847 Terracina Dr, Riverside 92506. A mariachi and taco bar reception in Smith Hall will follow the service.

In addition to his wife, Shannon M. Murphy, to whom he was married in 2009, Conrad is survived by his sons, William and Robert (Krystle), and two grandchildren.

Before entering the ordained ministry, Conrad was a commercial pilot and flight instructor; he was said to have been the youngest person up to that time to earn his flight credentials. Born in Victorville, he earned a bachelor’s degree at Thomas Edison State College, New Jersey, in 1993, and a master of divinity degree from Church Divinity School of the Pacific in 1996. Bishop Robert Anderson ordained him as a deacon on June 8, 1996; Bishop Frederick H. Borsch ordained him as a priest on Jan. 18, 1997.

In addition to his congregational ministry, Conrad had a broad range of interests and activities: with characteristic humor he described himself on his Facebook page as “Priest, Pilot, Poet, Counselor, Confessor, Confidant and Spiritual Proctologist.” An advocate for the poor, he wrote in his book To the Least of These: A Better Church Response to Homelessness that the issue of homelessness would not be solved until Christians saw the unhoused as their true siblings in Christ. He also wrote articles for church and aviation publications.

Another of Conrad’s passions was justice for the people of Palestine. He lived in Bethlehem during a 2012 sabbatical in order to better understand the Palestinians people, and later led many pilgrimages to the Holy Land, even founding a small travel company focused on such journeys.

In 2005 he earned a doctor of ministry degree at CDSP, focusing on systems theory and faith communities.

On Jan. 11, Bishop Taylor posted on Facebook a photo of himself and Conrad, asking for prayers for the latter and writing that he was “grappling with serious health challenges.” The following day, Conrad wrote the following on his own Facebook page:

“Ever since Bishop John Harvey Taylor uploaded a selfie with me looking like a whacked-out, wild-eyed junkie, I have been overwhelmed with prayer and emotional support from family and friends old and new. Everyone keeps asking about my condition. In his post, Bishop Taylor said I was “grappling with serious health challenges,” which is a little like saying Mercutio in Romeo and Juliet was “grappling with serious knife challenges.” As Mercutio quipped, “Ask for me tomorrow and you will find me a grave man.” Indeed. Not to put too fine a point on it, but it won’t be more than a few tomorrows before I find myself in the same situation. I have very terminal metastatic pancreatic cancer so I go into the next life chuckling at those of you who were betting on my liver. I have but a few days before I go off into the unknown to find the answer to many of the most important and perplexing theological questions, such as whether or not God cares if you are baptized before receiving communion, or whether we should keep the filioque clause in the Nicene Creed. I do accept Jesus as my savior and I do put my whole trust in his grace and love. It feels good. I go into the welcoming arms of my Lord Jesus feeling the warm embrace of an all-loving and all-forgiving God. I am truly at peace and greet the prospect of the next life with guarded anticipation.”